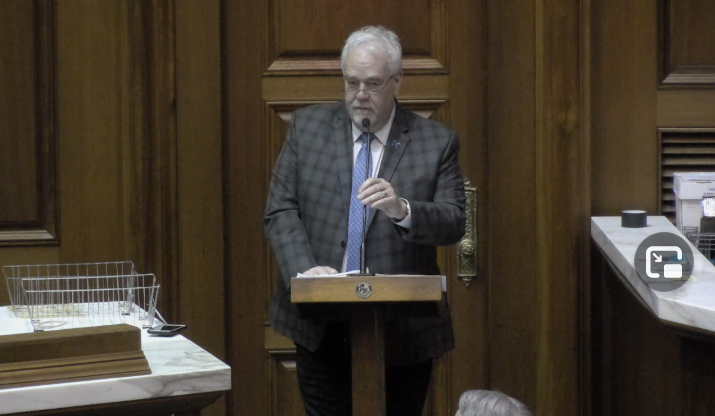 State Rep. Matt Lehman, R-Berne, speaks in the Indiana House chamber about his plan to require the governor give the General Assembly an guaranteed opportunity to act in response to a state emergency declaration lasting longer than 30 days. 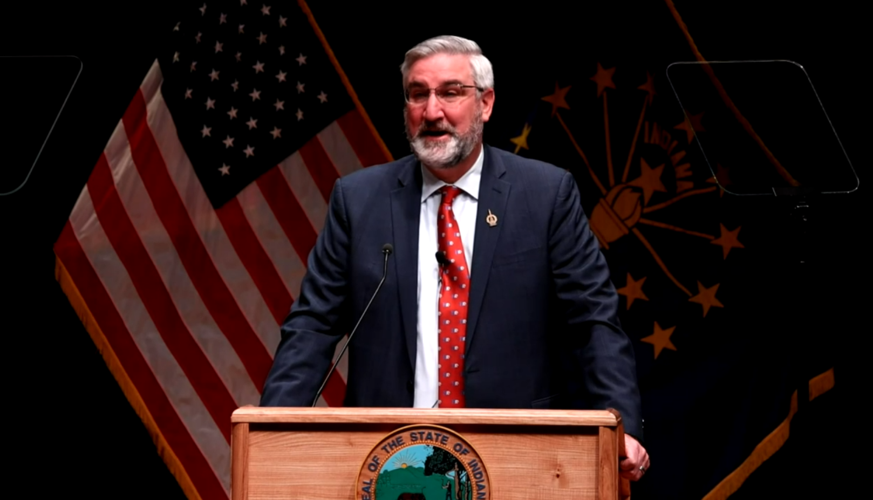 At least a half-dozen measures aimed at limiting the governor's unilateral authority to respond to a disaster by nearly any means necessary have been filed by members of the Indiana General Assembly during the first three weeks of the annual legislative session.

Some seek to ensure businesses and religious entities can continue operating no matter the emergency conditions, while others aim to prevent the enactment and enforcement of local public health orders more stringent than the governor's directives.

The only one that appears to be moving, however, is House Bill 1123, sponsored by state Rep. Matt Lehman, R-Berne, the House Republican floor leader, and state Reps. Ben Smaltz, R-Auburn, and Jim Pressel, R-Rolling Prairie, two House Republican committee chairmen.

It would limit the initial duration of a gubernatorial emergency declaration to 30 days. Under the plan, the governor could renew his emergency order for an additional 30 days if the General Assembly is meeting in regular session, or the governor calls the Legislature to convene a special session.

Subsequent 30-day renewals also would be permitted so long as the governor continues authorizing special sessions of the General Assembly at least every 60 days.

Lehman said state lawmakers would not necessarily be required to convene every time the governor issues a call for a special session in order to continue the emergency declaration, and Lehman doubts there soon will be another monthslong statewide emergency similar to the COVID-19 pandemic.

But he said there currently is no obligation for the governor to consult with the General Assembly in an emergency situation, and legislative leaders deserve at least the opportunity to decide themselves whether Hoosier lawmakers should be involved in the state's emergency response.

"It's calling now for coequal branches of government — the legislative branch and the executive branch — to make sure we're working together for good public policy during difficult times," Lehman said.

"If it is a good order and it needs to extend, the General Assembly is not compelled to act."

The governor's modern emergency powers were established in 1949, and tweaked repeatedly over the years, in response to the need for civil defense measures during the nuclear-armed Cold War between the United States and the Soviet Union.

In 2003, the General Assembly overhauled and expanded the governor's authority to respond to many different types of emergencies, including a public health emergency, after determining Indiana was ill-prepared if something similar to the Sept. 11, 2001 terrorist attacks occurred on Hoosier soil.

Lehman said the thinking at the time was the governor might need extraordinary authority to provide aid and restore normalcy in a single community or county for maybe a month or two; not lead a statewide response to a global pandemic for nearly a year.

Republican Gov. Eric Holcomb said he agrees the current emergency powers law did not contemplate a long duration, statewide emergency, and he understands why the Legislature has an interest in participating in the state's emergency response.

"I don't look at this as my administration versus the Legislature, at all," Holcomb said. "They're representing their districts and their constituents, who expect answers as well.

"We want to make sure first and foremost that we're serving the public, and I think that's our shared mission."

The governor said he's been consulting with legislative leaders throughout his COVID-19 response, and they've never expressed an interest in a special session — though several outspoken Republican lawmakers repeatedly have demanded one to try to rescind the governor's face mask directive and other COVID-19 mitigation strategies.

But the governor noted throughout the pandemic he's had to make decisions on a daily, and sometimes hourly, basis in response to changing circumstances, the spread of the virus, and state efforts to contain it.

He said the General Assembly tends to act at a much slower pace, with considerably more deliberation, and he cannot support a proposal that would restrict the governor's adaptability and flexibility in responding to an emergency.

"If the language is designed to halt or stunt or prohibit reacting to a public emergency as it unfolds, that is beyond concerning," Holcomb said. "You don't have four months to arrive at an ultimate, final decision."

The House Committee on Rules and Legislative Procedure is expected to consider potential amendments to Lehman's proposal in coming weeks, and then decide whether to send it to the full House for a decision on advancing it to the Senate for further review and revision.

"At this moment — our moment — even knowing full well the awful toll of COVID-19, and acknowledging that we are still in its deadly grip, it's important to now look to the future," Holcomb said.

Legislative leaders are fast-tracking proposals aimed at thwarting the perceived threat of civil lawsuits from individuals claiming they were infected with COVID-19 and entitled to monetary damages.

By any measure, things will be far from business as usual when the gavels slam down shortly after noon Region time Monday and the Indiana House and Senate come to order.

State restrictions on business operations, Indiana's face mask directive, and all of the governor's other COVID-19 prevention measures and guidelines will remain in effect until at least Jan. 24.

The Indiana Supreme Court has suspended all jury trials statewide until March 1 in response to the continuing surge of COVID-19 cases across the Hoosier State.

The Republican-controlled Indiana House voted along party lines to reject a rule proposed by Democrats that would have required face masks to be worn in the chamber. They are, however, "strongly recommended."

A Wisconsin woman was arrested at a LaPorte County gas station Friday after Indiana State Police officers detected the odor of burnt marijuana coming from her vehicle.

Michigan City Police are continuing to investigate a Saturday night shooting that killed a 27-year-old man and injured a 31-year-old woman.

Holcomb said the federal government will be providing an additional 13,000 doses a week, bringing the weekly total of first doses coming to Indiana to at least 90,000 in each of the next three weeks.

Gov. Eric Holcomb has signed an executive order extending Indiana's public health emergency due to the COVID-19 pandemic until at least March 1.

Appointments to receive the free immunization must be made online at ourshot.in.gov, or by calling 211.

More than 611,000 Hoosiers have received first dose of COVID-19 vaccine

Hoosiers age 65 and older who want to receive the free vaccine can schedule an appointment online at ourshot.in.gov, or by calling 211.

Governor could have fewer powers in future state emergencies

A House committee agreed Thursday that no state or local official ever should have the power to limit or halt religious services, including in-person attendance, under any circumstances.

Gingerbread and glühwein: The best Christmas markets in Europe this year

Gingerbread and glühwein: The best Christmas markets in Europe this year

State Rep. Matt Lehman, R-Berne, speaks in the Indiana House chamber about his plan to require the governor give the General Assembly an guaranteed opportunity to act in response to a state emergency declaration lasting longer than 30 days.