Former aide: Trump was told protesters had weapons on Jan. 6

Indiana is poised to become the 17th state to prohibit transgender girls, regardless of their gender identity or physical characteristics, from participating in girls athletics or sports teams at all public and private elementary, middle and high schools.

On Tuesday, the Republican-controlled General Assembly will convene a rare, one-day session to consider overriding Republican Gov. Eric Holcomb's veto of House Enrolled Act 1041 and enacting the measure into law notwithstanding his objections.

It takes in Indiana only a simple majority — the same 50% plus one required to send legislation to the governor in the first place — for the General Assembly to override a gubernatorial veto.

The proposal originally was approved 66-30 in the House and 32-18 by the Senate. All Northwest Indiana Republican lawmakers supported the plan, except state Sen. Ed Charbonneau, R-Valparaiso, who joined all Region Democrats in opposing it.

If enacted, trans girls in kindergarten through 12th grade will be barred by law from playing on a girls athletics team beginning July 1, and the parents of girls who believe their child was deprived of an athletics opportunity because of a trans girl's participation will be authorized to sue their school for monetary damages.

Holcomb said he sees the entire measure as a solution in search of a problem because there are no trans girls assigned male at birth participating in girls sports at Indiana schools. The legislation does not prohibit trans boys assigned female at birth from participating on boys sports teams.

"The presumption of the policy laid out in House Enrolled Act 1041 is that there is an existing problem in K-12 sports in Indiana that requires further state government intervention. It implies that the goals of consistency and fairness in competitive female sports are not currently being met. After thorough review, I find no evidence to support either claim even if I support the overall goal," Holcomb said in his veto message to the Legislature.

At the same time, Holcomb observed similar statutes enacted in other states recently have been struck down in federal courts as unlawful discrimination on the basis of sex.

He urged Hoosier lawmakers to take a second look at those decisions and tailor Indiana's policy on this issue to pass legal muster, rather than simply enacting legislation copied from other states that's all but certain to be challenged and struck down in court.

Holcomb also noted the "wide-open nature" of the grievance process outlined in the legislation is likely to lead to different policies being applied at different schools, frustrating female student-athletes and their parents and leading to costly litigation against Indiana school corporations and private schools.

"If it is the goal of House Enrolled Act 1041 to provide clarity and one consistent state policy regarding the fairness in K-12 sports in Indiana, for me this current bill falls short," Holcomb said.

"Amidst the flurry of enthusiasm to protect the integrity and fairness of women's sports in our state — a worthy cause for sure — this bill leaves too many unanswered questions."

Supporters of the legislation claim their primary interest is "saving women's sports," even though the Indiana law would not apply to women's college or professional athletics, only girls sports.

"This issue continues to be in the national spotlight and for good reason as women have worked hard for equal opportunities on the playing field — and that's exactly what they deserve," said House Speaker Todd Huston, R-Fishers.

Huston authorized a veto override vote at Tuesday's technical corrections session, a seldom-held, one-day legislative meeting for making technical adjustments to new state laws before they take effect July 1, because he said waiting until the General Assembly reconvenes next year, when veto overrides usually are on the agenda, simply is too long of a delay.

State Rep. Michelle Davis, R-Whiteland, the sponsor of the measure, said her legislation is needed to ensure Hoosier female athletes have "the opportunity to win and lose on a level playing field."

Republican Attorney General Todd Rokita, a Munster native, also favors a veto override, as does Republican Secretary of State Holli Sullivan, whom Holcomb plucked from relative obscurity in the Indiana House a little more than a year ago and appointed her to fill a vacancy in the secretary of state's office.

"Generations of women have fought for equal rights in this country. House Enrolled Act 1041 is designed to protect those rights and the integrity of female sports," Sullivan said. "I wholeheartedly support the Legislature's intentions to override Governor Holcomb's veto."

Likewise, U.S. Sen. Mike Braun, R-Ind., who reportedly is considering running for governor in 2024, is urging the Legislature to promptly enact the law despite Holcomb's opposition.

"Girls sports should be for girls, and allowing biological males to compete with them robs female athletes of a chance to compete and win," Braun said. "I'm disappointed Governor Holcomb vetoed a bill to make this law in Indiana, and I support a veto override to protect women's athletics."

Meanwhile, state Sen. J.D. Ford, D-Indianapolis, the only openly LGBTQ member of the Senate, said this effort to solve a problem that doesn't exist will end up harming all trans Hoosiers, particularly children.

"Trans girls are girls. When these students look into the mirror they do not see the gender they were assigned at birth looking back at them," said Ford, a graduate of Purdue University Northwest. "These kids didn't choose this. It's who they are and who I am.

"I firmly believe all students have a right to participate in athletics in a manner consistent with their identity, even if that identity doesn't match a birth certificate or a school registration record."

"This makes us look terrible as a state," Lanane said.

Indeed, already more than 150 major corporations, including Amazon, Apple, AT&T, Cargill, CVS, Kellogg, Microsoft, Salesforce and Unilever, among others, have said this measure will impair their ability to recruit and retain employees in Indiana.

"Companies are choosing to support their employees and their families, and if legislators are interested in ensuring a strong business climate that attracts the top talent across the country, they must stop advancing legislation that discriminates against transgender youth and LGBTQ+ people," said Joni Madison, interim president of the Human Rights Campaign.

The Indiana chapter of the American Civil Liberties Union (ACLU) has vowed to challenge the measure in federal court as unlawful sex discrimination if the veto override succeeds.

"Trans kids have a right to live full lives, just like everyone else. This legislation is hateful, harmful, and appears to violate federal law and the Constitution. Courts have blocked similar laws from going into effect in several other states. This isn’t over," said Katie Blair, Indiana ACLU advocacy and public policy director.

Rokita, on the other hand, said he's eager to "vigorously defend it in court if, and hopefully when, the General Assembly overrides the veto."

"By caving and vetoing this bill, the governor made clear that appeasing these woke special interests means more to him than equal opportunity for Hoosier girls," Rokita said. 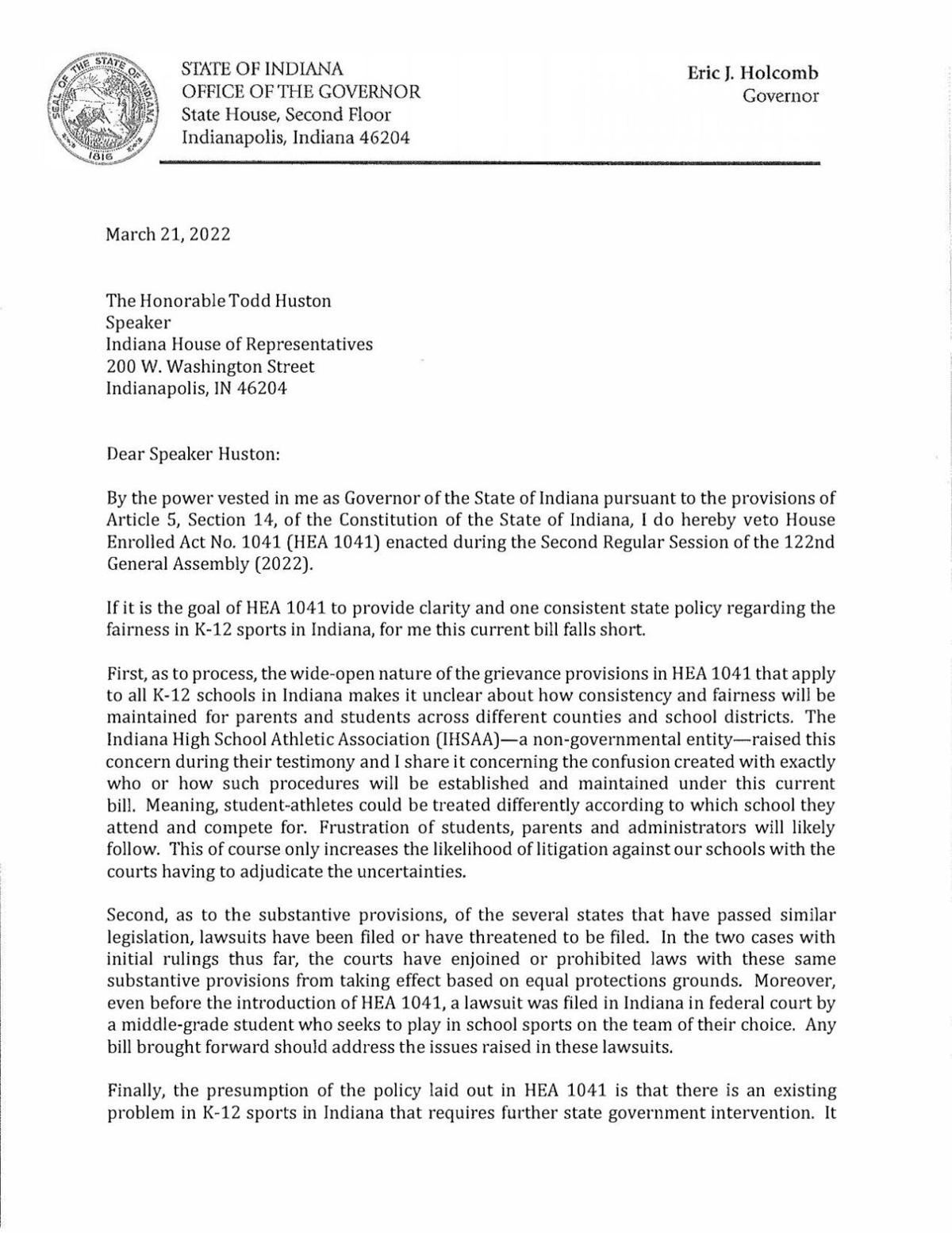 Both governors said the trans sports bans are solutions in search of a problem as neither Indiana, nor Utah have many trans girls assigned male at birth participating in girls' sports.

"This issue continues to be in the national spotlight and for good reason as women have worked hard for equal opportunities on the playing field — and that's exactly what they deserve."

"The presumption of the policy laid out in House Enrolled Act 1041 is that there is an existing problem in K-12 sports in Indiana that requires further state government intervention."

"It's been a challenging year, frankly, to find a way forward," said Senate President Rod Bray. "Lots of contentious issues but we worked through them and found a way to resolve most of them."

The Republican-controlled Senate voted 32-18 Tuesday to send House Enrolled Act 1041 to Republican Gov. Eric Holcomb to be signed into law or vetoed. It last month passed the House, 66-30.

House, Senate far apart on key issues at start of second half of Indiana legislative session

The second half of the 2022 Indiana General Assembly begins Monday, setting off a five-week sprint to the Legislature's statutory March 14 adjournment deadline.

The Indiana House voted Thursday to prohibit trans girls assigned male at birth from participating in any elementary or high school athletic competition designated as a "girls" or "female" sport.

Children assigned male at birth may be barred from participating in school athletic competitions designated as a "girls" sport — no matter the child’s gender identity or physical characteristics.

Transgender girls in Indiana, regardless of their physical characteristics or gender identity, are prohibited by law from participating in girls sports teams at all K-12 schools beginning July 1.