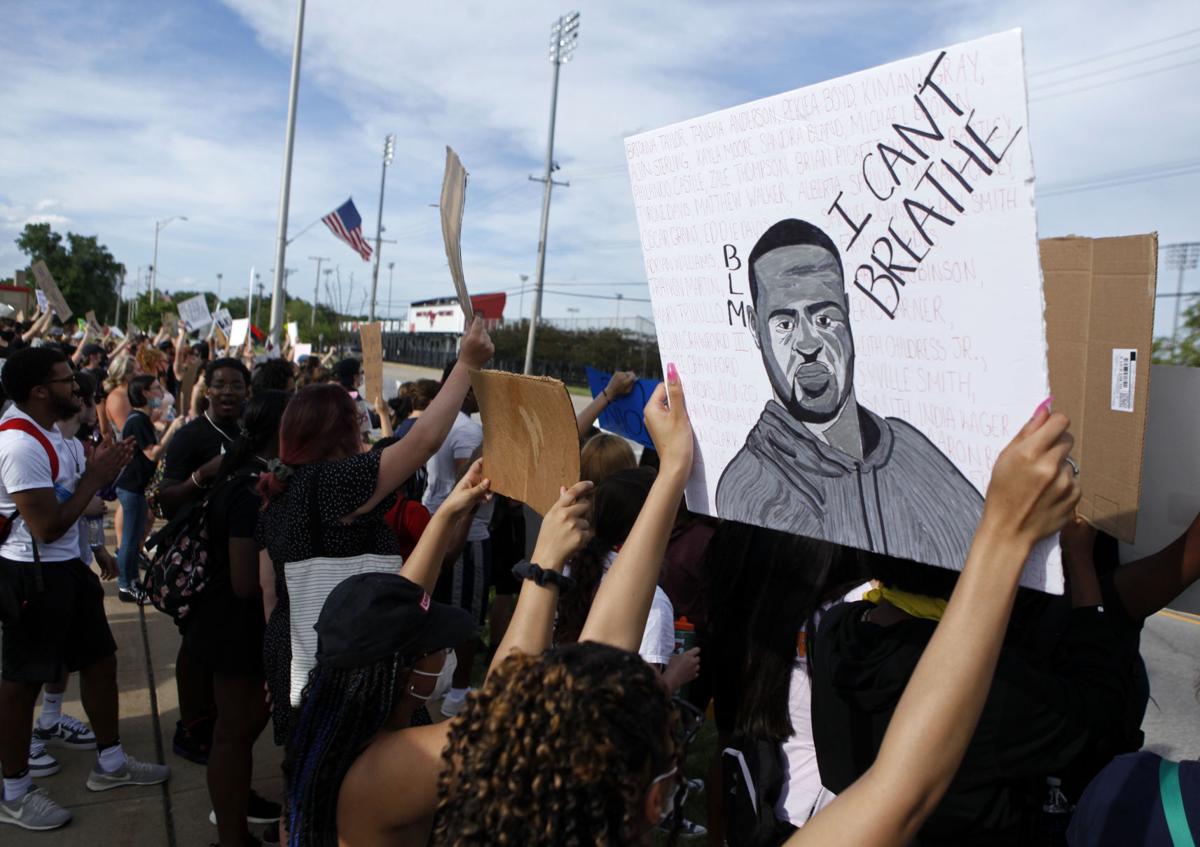 A sign featuring the resemblance of George Floyd, a black man that died while in police custody in Minneapolis, is one of many in a social justice protest on June 5, 2020 outside Munster High School. 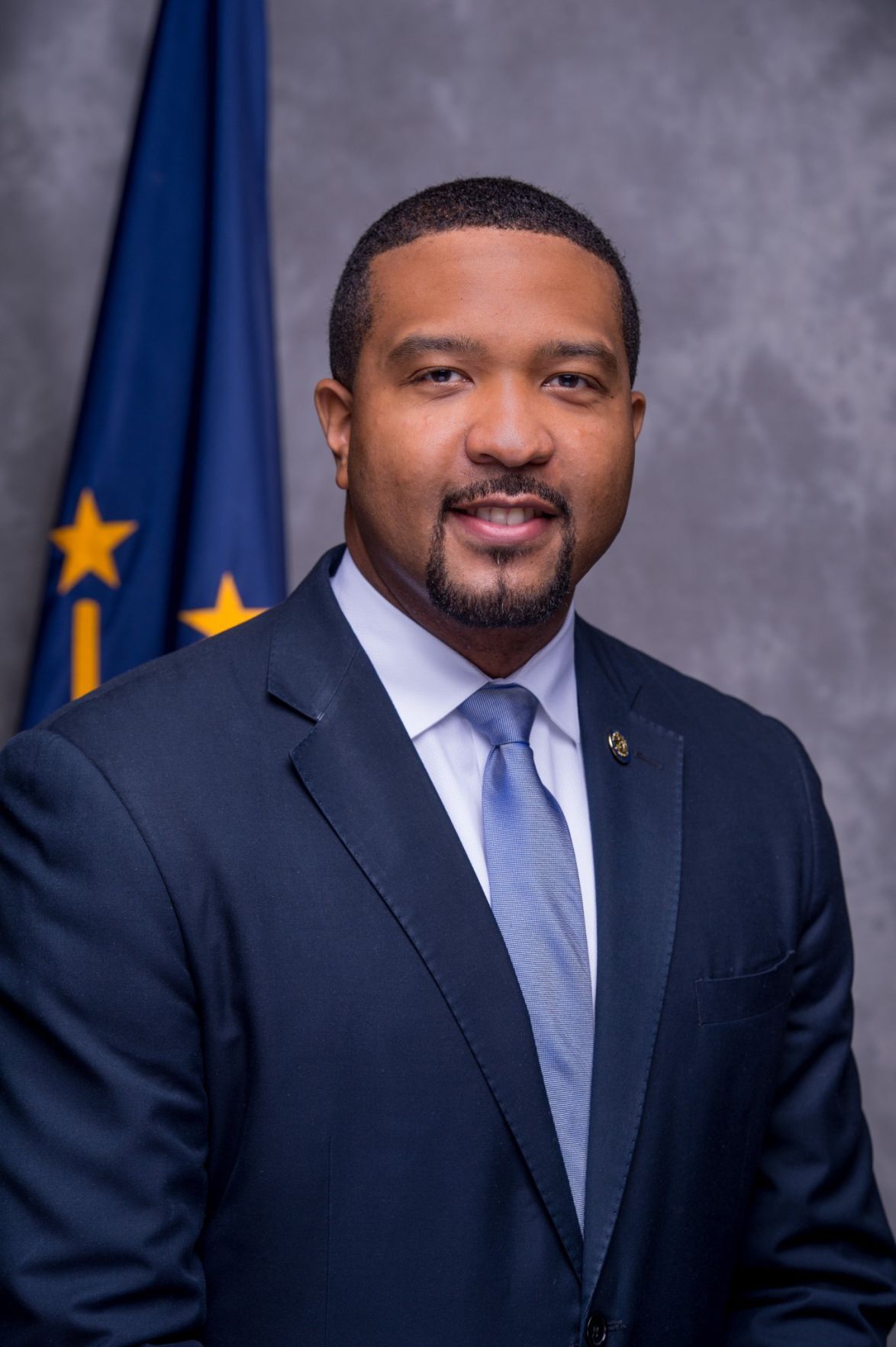 The nationwide protests against police misconduct last summer, including several peaceful demonstrations in Northwest Indiana, have spurred Hoosier lawmakers to direct Indiana law enforcement officers to opt for de-escalation where possible, instead of increasing their use of force.

On Tuesday, the Indiana Senate joined the House in unanimously approving the police reforms in House Enrolled Act 1006, which soon is expected to be signed into law by Republican Gov. Eric Holcomb.

The measure requires de-escalation training be taught in conjunction with the proper use of force to new and returning officers at the Indiana Law Enforcement Academy, and provides $70 million to upgrade the facilities at the state's police academy to that end.

It also defines a chokehold as a type of deadly force and permits its use only to prevent the commission of a felony or while arresting a person who the officer has probable cause to believe poses a threat of serious bodily injury to the officer or another person.

Under the proposal, police officers who intentionally turn off a body camera to conceal a criminal act by themselves or other officers can be charged with a class A misdemeanor, punishable by up to one year in jail and a $5,000 fine.

In addition, the legislation attempts to stop bad cops from moving from department to department by requiring a locality check the disciplinary record of any potential officer hire from every police agency where the job candidate previously worked.

State Sen. Eddie Melton, D-Gary, said he's "extremely pleased" the plan is headed to the governor's desk with bipartisan support in both chambers of the General Assembly.

"This is a historic piece of legislation and is a good first step in beginning to address and improve relations with law enforcement," Melton said. "The bill addresses concerns Hoosiers voiced last summer, including chokehold bans under certain circumstances and required de-escalation training for officers."

"As a black man in Indiana, seeing this proposal pass with overwhelming, unanimous support gives me hope for our future, and I will continue working to improve our criminal justice system."

Indiana may defund counties, cities and towns that fail to protect monuments amid civil unrest

The state of Indiana soon may withhold appropriations from counties, cities and towns that fail to protect monuments, memorials and statutes amid violence, rioting or other illegal activity.

During their deployment, the Indiana Guardsmen helped with crowd and traffic control at the National Mall and near the White House.

No Trump supporters, opponents, or anyone else determined to make mischief showed up at the Indiana Statehouse before or after Biden's swearing-in Wednesday to protest the new federal administration.

Not a single Trump supporter, opponent, or really anyone else showed up to protest, demonstrate or make a scene Sunday at the Indiana Statehouse.

The chief justice of Indiana is responding to racial inequality protests by urging action to improve fairness and justice throughout the state's judicial branch.

"Our officers have been deployed almost every single day," Sheriff Oscar Martinez said. "We're the primary agency that they call upon based upon the training and the resources that we have."

The city of Gary is preparing to reexamine the operations of its police department amid nationwide calls for reform.

"We're seeing peaceful protests that start out with a noble cause in mind. Those seeking to right wrongs of the past. ... But we are seeing those peaceful demonstrations get hijacked."

Gov. Eric Holcomb is hopeful Indiana never will see violent protests and property destruction similar to the scenes playing out this week in Minnesota.

The Indiana General Assembly is preparing to end its annual legislative session April 21 — more than a week ahead of the statutory April 29 adjournment deadline.

Police officers and firefighters in Indiana soon may no longer be required to live within 50 miles of the community they serve.

A sign featuring the resemblance of George Floyd, a black man that died while in police custody in Minneapolis, is one of many in a social justice protest on June 5, 2020 outside Munster High School.