The Hoosier State is on somewhat firmer financial footing after recouping last month an estimated $900 million in individual and corporate income tax payments, whose due dates were postponed to July 15 from April 15 due to the coronavirus pandemic.

State Budget Agency data released Friday show, after accounting for the delayed income tax payments, total Indiana tax collections between July 2019 and July 2020 were just $612.5 million, or 3.4%, below the state's revenue forecast, and $161.5 million, or 0.9%, less than the same 13-month period one year earlier.

That's significantly smaller than the $1.4 billion revenue shortfall Indiana recorded at the June 30 end of its 2020 budget year, with the revenue from postponed income taxes coming in slightly larger than anticipated by state budget officials.

At the same time, the $612.5 million is likely permanently lost revenue since Hoosiers can't go back and pay sales tax on items they didn't purchase when retailers were shut down at the start of the pandemic, or generate wagering tax receipts by retroactively gambling at casinos that were closed for three months between March 16 and June 15.

According to the State Budget Agency, the employment and spending effects of COVID-19 are continuing to impact state revenue.

Excluding the delayed income tax payments, it said Indiana tax collections in July were less than predicted by the December 2019 revenue forecast, and are likely to continue to miss the target in future months until the forecast is revised in September and again in December.

To adjust for the ongoing anticipated deficit, state budget officials transferred $577.6 million from Indiana's Medicaid reserve to the General Fund, and canceled or postponed more than $400 million in university construction projects, among other budget balancing measures.

Republican Gov. Eric Holcomb also has directed most state agencies to cut spending by up to 15%, freeze hiring, and reduce spending as much as possible on operations, office space, travel and promotional items.

Records show Indiana still has a budget reserve of about $1.4 billion, or 8.1% of projected annual spending — less than the 12-14% spending reserve the state has maintained for most of the past decade. 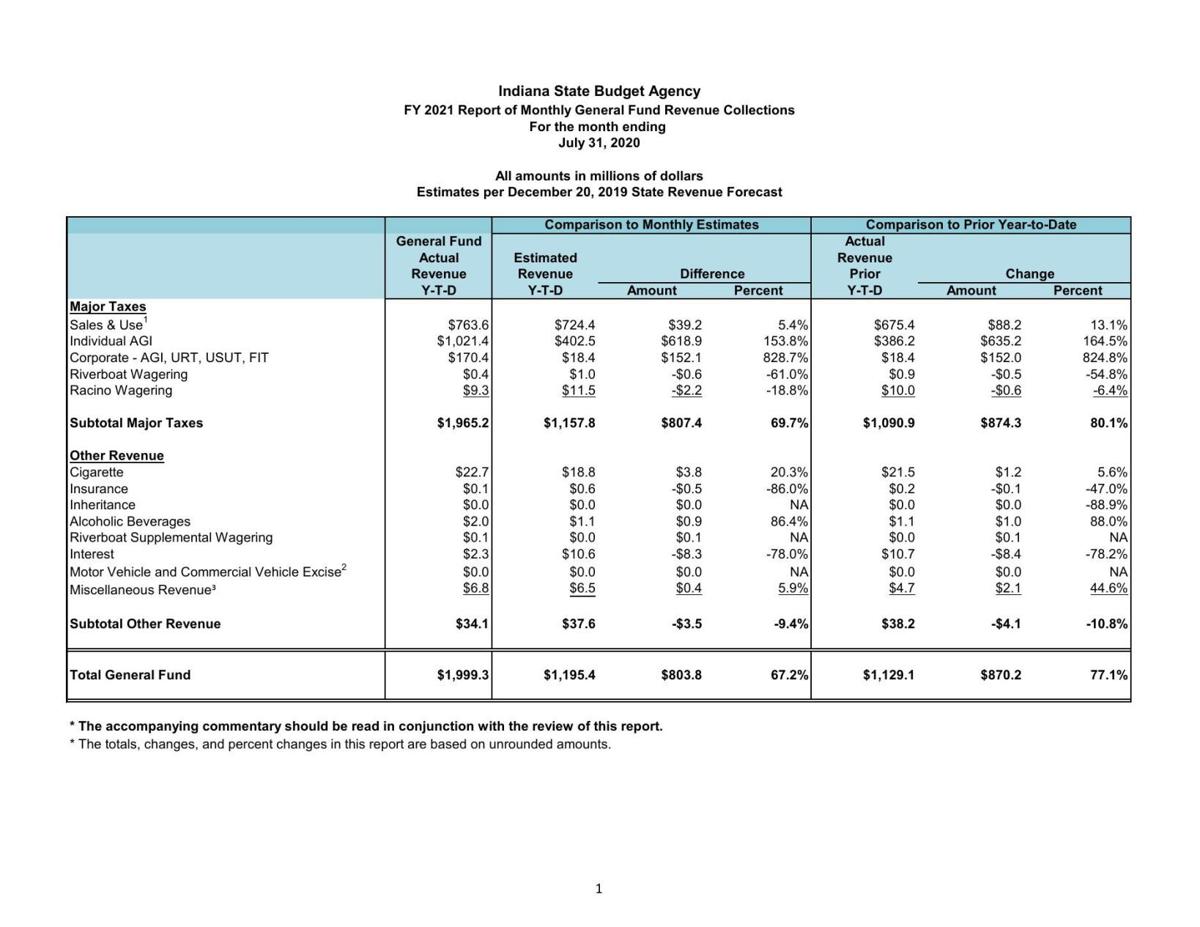 Indiana schools may lose 15% of their basic per student funding if they don't hold in-person classes this fall and opt for online-only coursework in response to the coronavirus pandemic.

Indiana appears to have successfully absorbed the initial impact of the coronavirus on tax revenues and state spending.

The partial reopening of Indiana's economy boosted state tax revenue collections in May according to new data from the State Budget Agency.

To cope with sharply reduced tax revenue due to the coronavirus, Indiana is setting "significant spending reduction targets" for state agencies, on top of already implemented cost-cutting measures.

State budget leaders are warning of grim financial days ahead for Indiana after the state's anticipated March tax collections fell short by $70 million, or 6%.

The Holcomb administration intends to maintain education funding at the level set in the 2020-21 state budget, notwithstanding the massive tax revenue decline set to hit Indiana in the months ahead due to coronavirus.

A man in Cedar Lake was flown by helicopter for medical treatment Sunday after suffering extensive burns when his personal watercraft backfired on him.

The American Lung Association is calling on Indiana's 13 commercial casinos to permanently prohibit smoking in their facilities.

Indiana arts, cultural and destination marketing organizations impacted by the coronavirus pandemic can apply for up to $10 million in new state assistance grants.

Governor to address Hoosiers on 'equity and inclusion' issues Tuesday

Gov. Eric Holcomb is preparing to deliver a statewide address on "equity and inclusion" at 12:30 p.m. Region time Tuesday.

Gov. Eric Holcomb is adjusting some state child care regulations to accommodate schools switching to e-learning from in-person instruction due to the coronavirus pandemic.

"Going into the rest of the fiscal year, significant fluctuations are expected and deviations from monthly estimates are likely," according to the State Budget Agency.

The governor will sign an executive order moving the state to Stage 5 of Indiana's five-stage Back on Track reopening plan for at least a three-week period, beginning at 11:01 p.m. Friday in Northwest Indiana.

Gov. Eric Holcomb is extending Indiana's Small Business Restart Grant program until Dec. 1 in the hope of getting more money in the hands of Hoosier companies struggling to stay afloat.

Hoosier taxpayers who requested a four-month extension to file their 2019 income tax returns have until Monday to get them in.