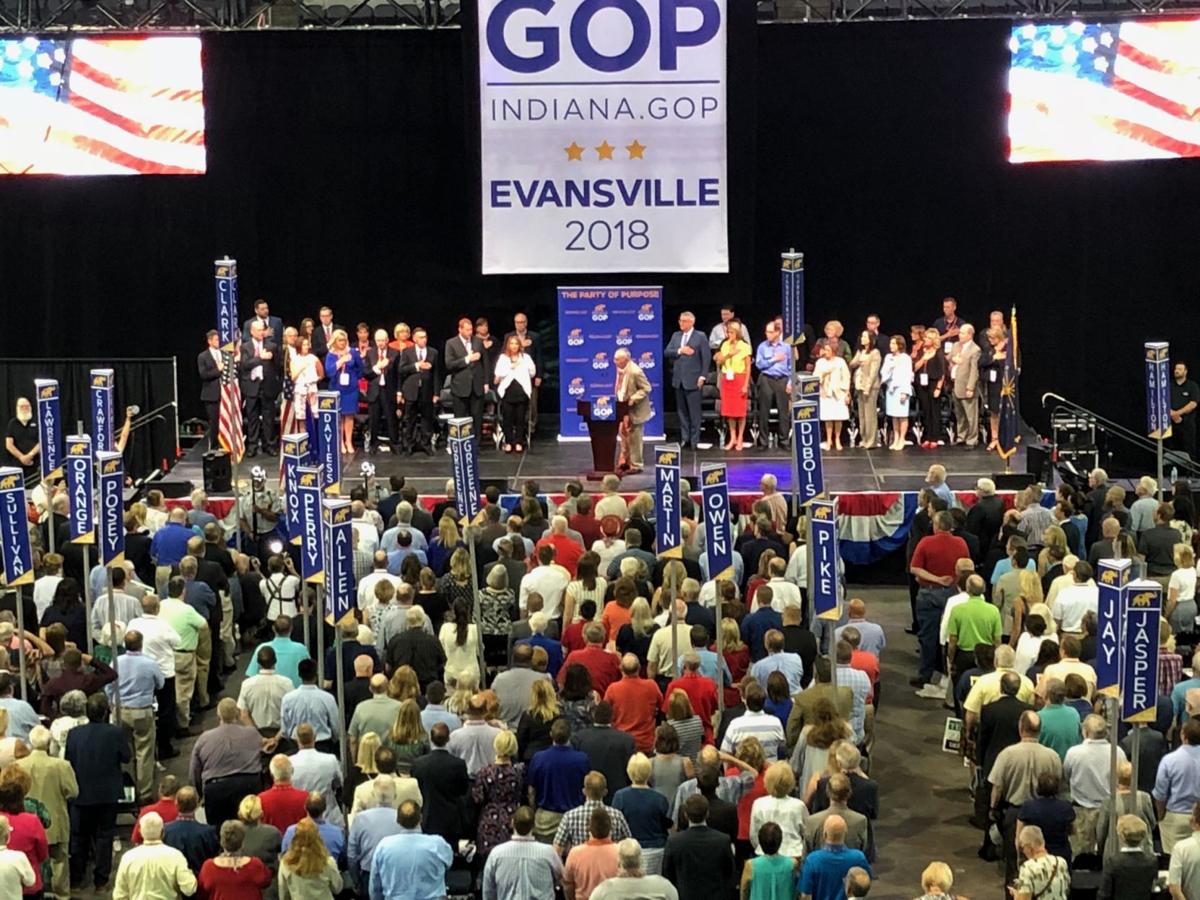 Hoosier Republican delegates recite the Pledge of Allegiance on Saturday to start the party's biennial state convention at the Ford Center in Evansville. 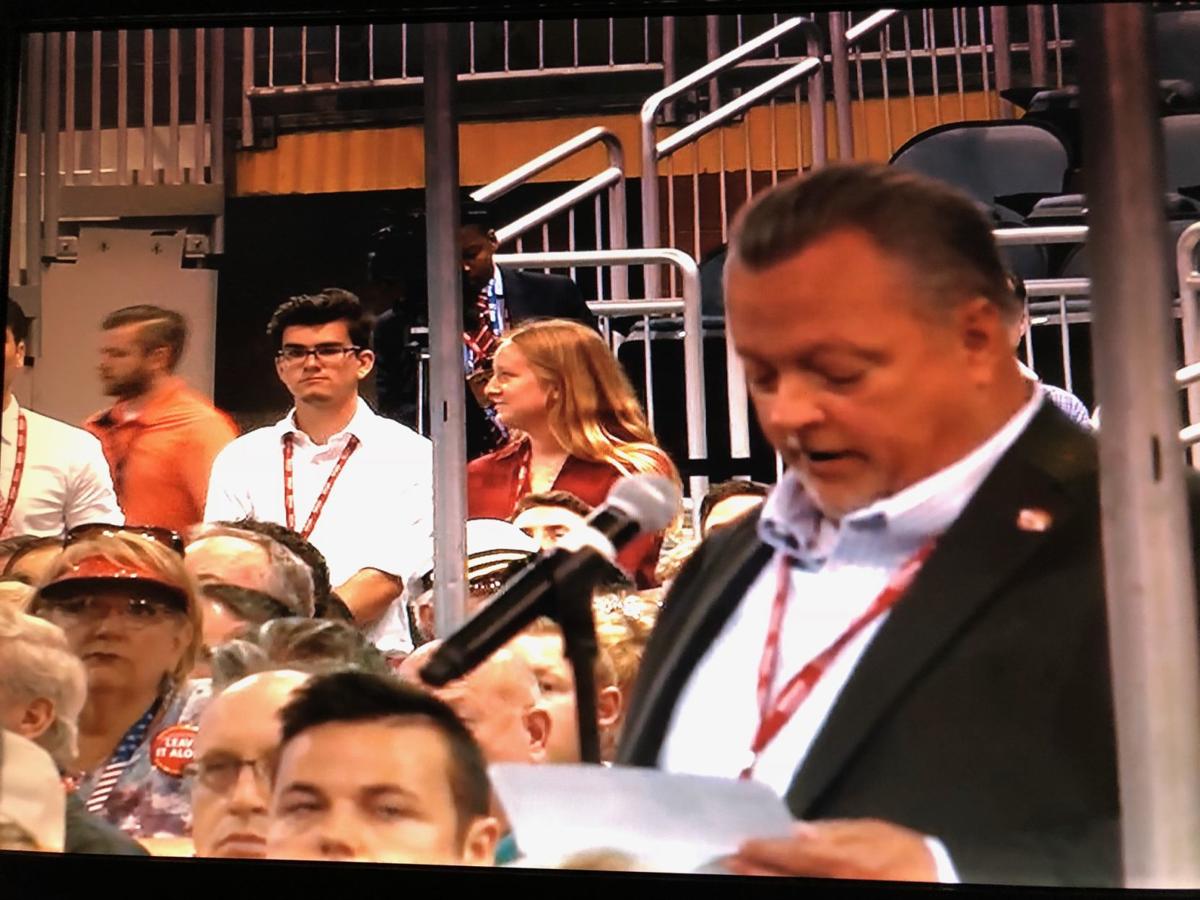 Porter County Republican Chairman Michael Simpson speaks Saturday in favor of the revised "strong families" plank in the Republican platform during the party's state convention in Evansville. Delegates instead voted to retain a 2016 platform provision that explicitly endorses man-woman marriage as the foundation of strong families. 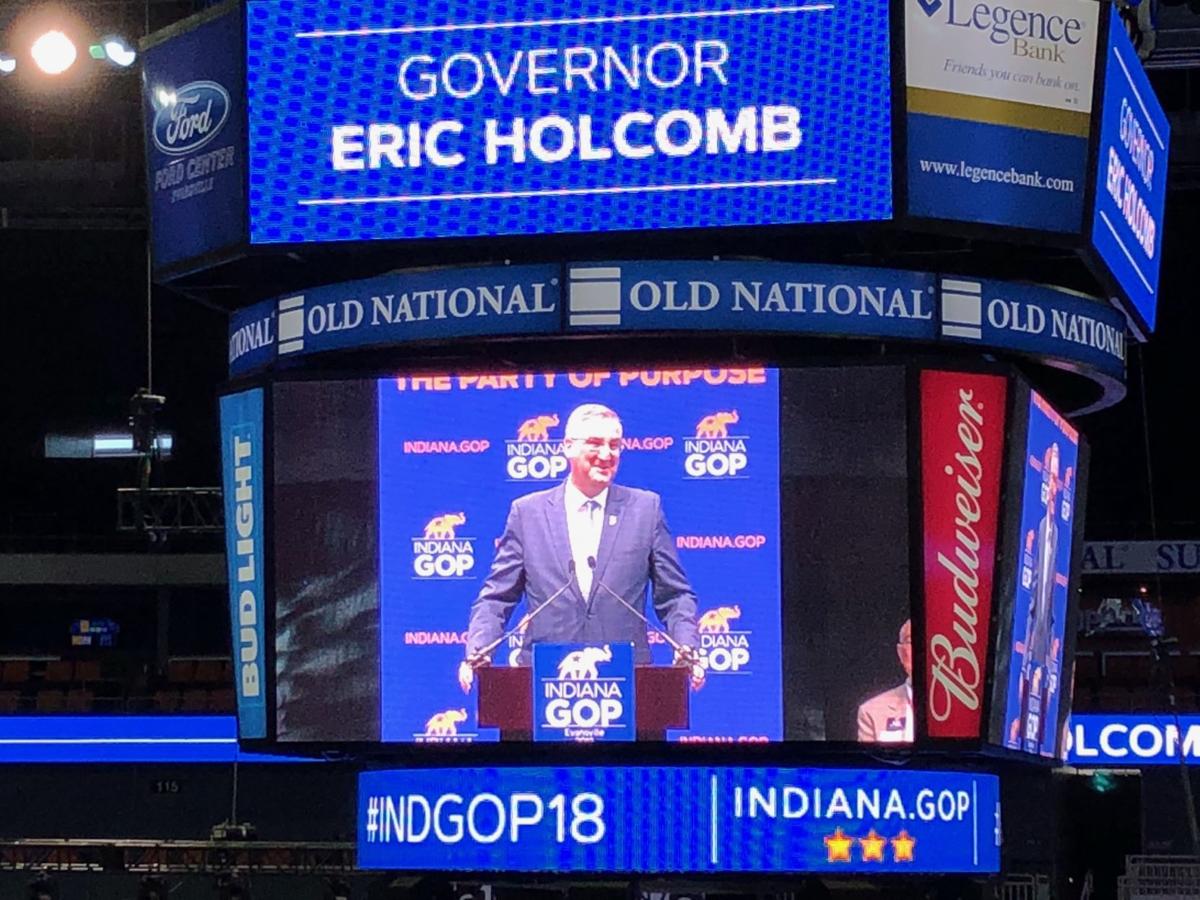 An image of Gov. Eric Holcomb is displayed on the videoboard at Evansville's Ford Center as he speaks to delegates attending the biennial Republican State Convention.

EVANSVILLE — The Indiana Republican Party, by an overwhelming margin, reaffirmed Saturday its commitment to marriage “between a man and a woman” as the preferred structure for Hoosier families.

In so doing, the 1,494 GOP delegates attending the party's biennial state convention turned aside a revised “strong families” platform plank, proposed by Gov. Eric Holcomb's party leadership, that expressed support for all adults raising children, in favor of renewing explicit support for opposite-sex marriage that first was inserted in the platform in 2014 by marriage equality opponents.

The platform debate was the sole controversy at the half-day convention that also saw Secretary of State Connie Lawson, State Auditor Tera Klutz and State Treasurer Kelly Mitchell nominated as the party's candidates for the November elections.

Most delegates applauded and cheered following the voice vote that preserved the Gov. Mike Pence-era endorsement of what backers describe as “traditional” marriage.

Daniel Elliot, the Morgan County GOP chairman and leader of the Republican Victory Committee that pushed the platform issue to the convention's forefront, said preferring man-woman marriage “is an important part of who we are as Hoosier Republicans.”

“This language ... recognizes the reality on the ground that most families are headed by married couples,” Elliot said.

Porter County Republican Chairman Michael Simpson advocated for the proposed revision that would have declared: "We support traditional families with a mother and father, blended families, grandparents, guardians, single parents and all loving adults who successfully raise and nurture children to reach their full potential every day.”

Simpson said in a floor speech to the delegates that a broader understanding of family “is the best platform for our party and the best way for us to grow.”

He said following the vote that he accepts and respects the will of Hoosier Republicans on the issue, but still believes the party's platform needs to change so it is as inclusive as possible.

“We're going to continue (in Porter County) on our inclusive processes and try to bring everybody in and make them feel welcome and be a part of the team,” Simpson said. “We're going to keep encouraging all people to come and participate in our party.”

GOP State Chairman Kyle Hupfer insisted Hoosier Republicans are united coming out of the party gathering in the state's southwest corner, despite a floor fight over marriage issues for the third consecutive convention.

“I think it's been a good experience for our party. We've shown that we're open to varying views within the party,” Hupfer said. “And, we're going to continue to discuss it.”

Earlier, Hupfer seemed to stun the otherwise enthusiastic crowd when he recommended the delegation be significantly more varied when the party convenes again in two years.

“We must recognize that Indiana is becoming more diverse, more urban and as is always the case, every year another set of young voters cast their first ballots,” Hupfer said. “It is imperative that our party grow and evolve at this same pace.”

He received some applause when he called on local Republican leaders to integrate minorities and youth into their leadership structure, as well as when he pledged to do so at the state party offices.

There was, however, sustained clapping by the delegates from Indiana's 92 counties when Hupfer declared the Republican Party “must also find ways to ensure that our rural heritage is protected.”

There was no competition for any of the three state offices up for nomination, which allowed convention chairman Ed Simcox, a former Indiana secretary of state originally from LaPorte, to declare the party's candidates nominated by acclamation.

It's the second time this century the Indiana Republican Party has selected three women as its standard-bearers in the general election. The first was in 2014 when Lawson and Mitchell ran with then-State Auditor Suzanne Crouch, who now is lieutenant governor.

Lawson said if she wins another four-year term as the state's chief elections officer she plans to “make sure that it's easier to vote and harder to cheat.”

Klutz pledged to continue promoting transparency if Hoosier voters retain her as state auditor, whose duties include making sure Indiana pays its bills on time.

“After all, it is your money and so you should know where it goes and how it's spent,” Klutz said.

Mitchell, the state treasurer nominee and a Valparaiso University graduate, said her second-term priorities include helping to make college easier to pay for using education savings accounts, known as 529 plans, that she manages on behalf of thousands of Hoosier families.

Indiana Democrats will nominate their candidates for secretary of state, state auditor and state treasurer June 16.

Two of the likely Democratic nominees are from Northwest Indiana: Jim Harper, of Valparaiso, running for secretary of state; and John Aguilera, of East Chicago, who is seeking to become state treasurer.

“We believe, in strong families. We believe that strong families, based on marriage between a man and a woman, are the foundation of society. We also recognize that some families are much more diverse and we support the blended families, grandparents, guardians, single parents* and loving adults who successfully raise and nurture children to reach their full potential every day.”

*The addition of "single parents" into the list of supported family types was universally backed during the 2018 platform committee process. Therefore, we have added "single parents" to the 2016 language as well.

“We believe in strong families. We believe that strong families are the foundation of society and that such families bring forth citizens capable of self-government, as well as properly-motivated public servants so essential for a successful republic. We support traditional families with a mother and father, blended families, grandparents, guardians, single parents and all loving adults who successfully raise and nurture children to reach their full potential every day.”

INDIANAPOLIS — Former state Rep. Mike Braun, R-Jasper, is emphasizing his experience as a successful business owner in working to sell himself…

INDIANAPOLIS — A national effort by abortion opponents to effectively ban the procedure by establishing the independent personhood of a fetus,…

Valparaiso Democrat calls out Indiana secretary of state to secure the Nov. 6 election from hacking

ICYMI: The Times' coverage from primary night in Northwest Indiana

All of The Times' coverage from Tuesday's election night.

The Indiana Republican Party is launching an unprecedented effort to develop relationships with minority communities across the Hoosier State that extend beyond Election Day.

Hoosier Republican delegates recite the Pledge of Allegiance on Saturday to start the party's biennial state convention at the Ford Center in Evansville.

Porter County Republican Chairman Michael Simpson speaks Saturday in favor of the revised "strong families" plank in the Republican platform during the party's state convention in Evansville. Delegates instead voted to retain a 2016 platform provision that explicitly endorses man-woman marriage as the foundation of strong families.

An image of Gov. Eric Holcomb is displayed on the videoboard at Evansville's Ford Center as he speaks to delegates attending the biennial Republican State Convention.