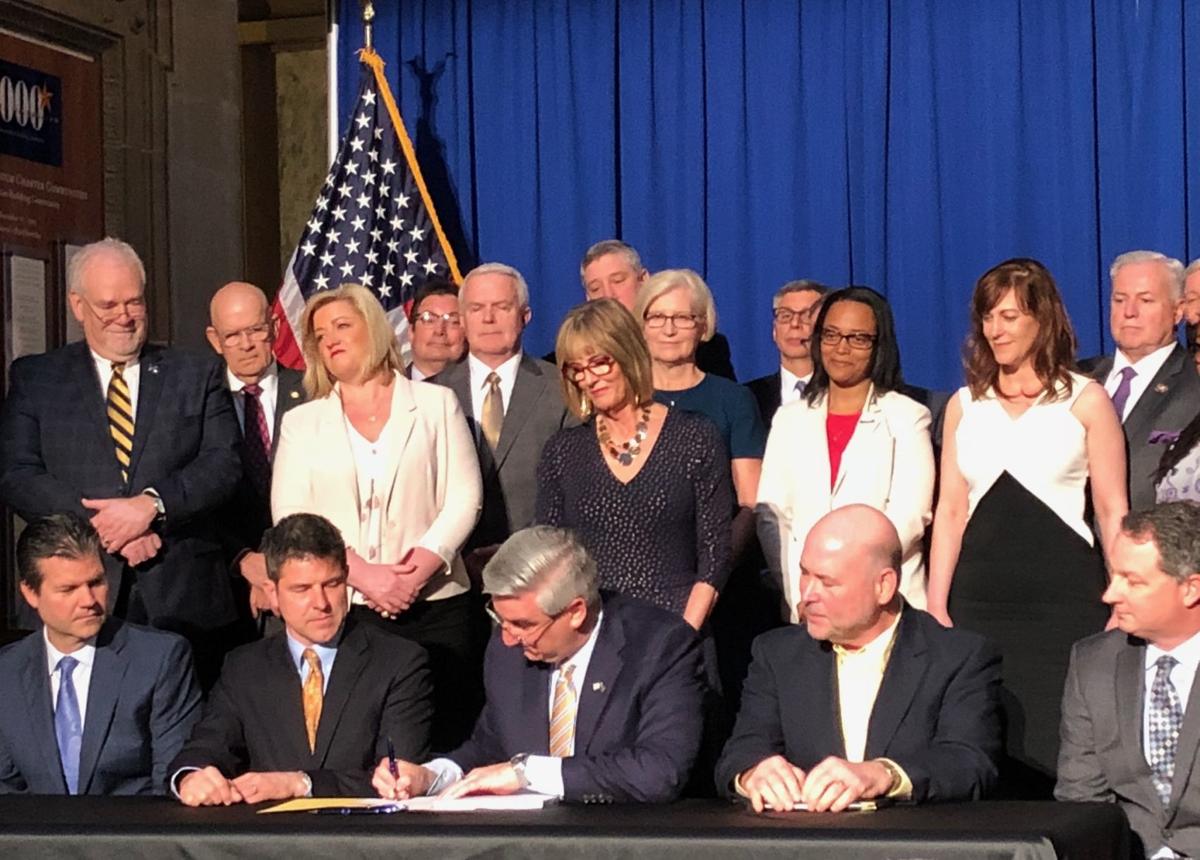 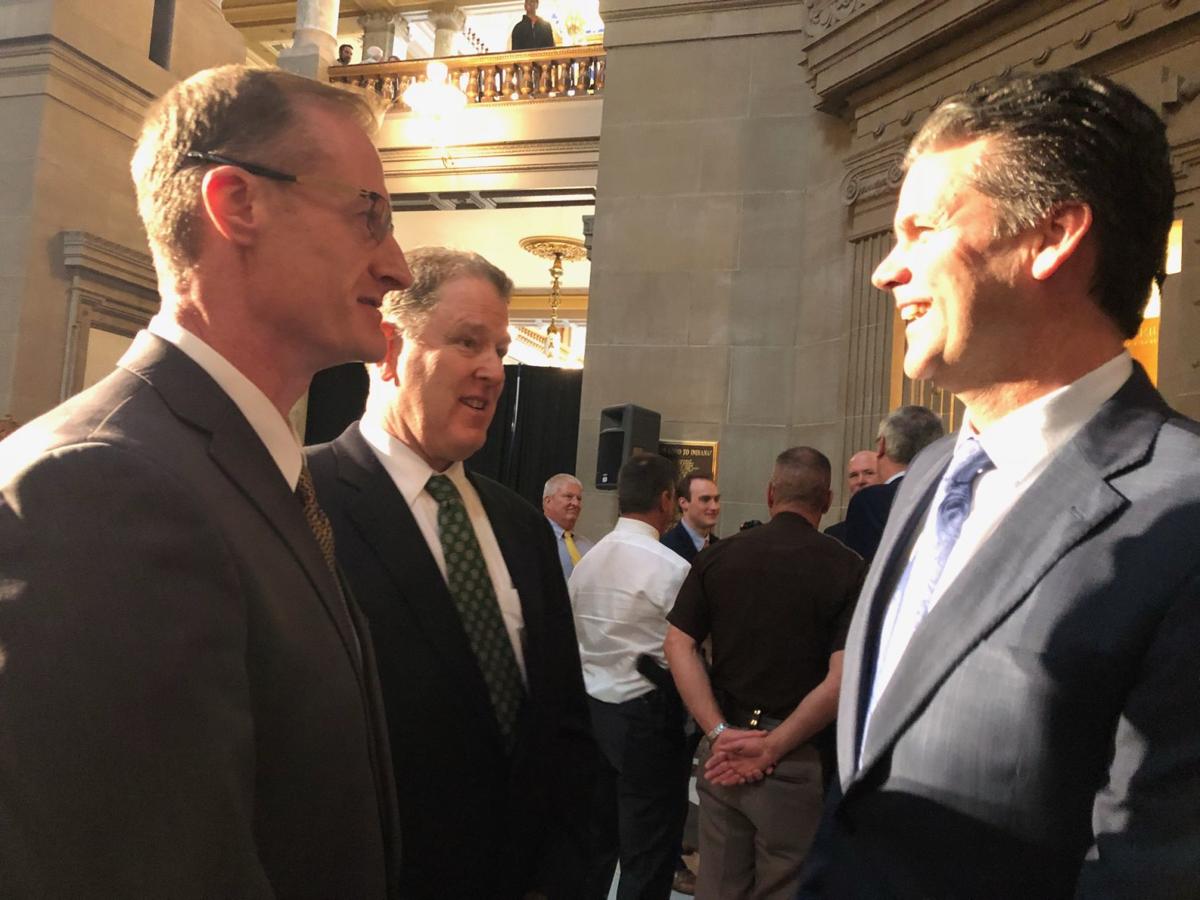 That money is on top of the $12 million a year the state is providing to the Northwest Indiana Regional Development Authority for its share of the cost to extend the commuter rail line from Hammond to Dyer in west Lake County, and to double-track the existing South Shore Line between Gary and Michigan City.

The extra funds are intended to ensure that both projects can be completed, even if the Federal Transit Administration only provides a Capital Investment Grant match of 38%, instead of the 49% match originally anticipated.

House Enrolled Act 1001 also immediately eliminated the 11-member board of the Northern Indiana Commuter Transportation District, which operates the South Shore Line, in favor of a five-member board led by the Indiana Department of Transportation commissioner.

Holcomb, instead of county leaders, will appoint the other four board members — one elected officeholder each from Lake, Porter, LaPorte and St. Joseph counties, and equally balanced between Democrats and Republicans.

RDA CEO Bill Hanna, who was at the Statehouse for the governor's budget signing, said given the significant additional state investment in the rail projects, it makes sense for the state to take a larger role in ensuring they are completed.

"The NICTD board has done an excellent job. I mean to the person. They helped elevate the railroad to a level where the state now recognizes the importance of our connection to Chicago through this asset, and how vital it is to jobs on a daily basis," Hanna said."I think this is a good structure going forward to help us deliver the project. It's small and nimble, but it brings with it a lot of oversight and experience with projects."

Hanna also believes the greater state stake in the South Shore Line projects shows the federal government that Indiana is perhaps more committed than the other states and localities vying for the same pool of federal infrastructure funding.

"I think we're as competitive as we possibly can be on a national level, and this gives the Indiana delegation in Washington all the tools they need to help us get the project done," Hanna said.

The extra funds come from state money freed up in connection with the $1 billion in proceeds from the recent Indiana Toll Road lease amendment.

"Fortunately, the state of Indiana had that money," Holcomb said. "Not every state has the means to do that, and having a healthy reserve, living within your budget, this is made possible in a state like Indiana."

Indiana still will have about $2 billion in reserve at the end of the two-year budget period on June 30, 2021, even after the budget boosts education funding by $753 million, including 2.5% annual increases in elementary and high school student tuition support.

"While teacher pay decisions are best left to local schools, our efforts to drive more dollars to the classroom through a record investment in education will be a boon for students and teachers alike," said House Speaker Brian Bosma, R-Indianapolis.

Hanover Central School Corp. voters said no Tuesday to a request for a construction project to address growth.

INDIANAPOLIS — Gov. Eric Holcomb has appointed a Crown Point native to lead the state office that oversees all aspects of Indiana's finances.

MERRILLVILLE — The Hoosier State is poised for tremendous economic and population growth in the years ahead, and Northwest Indiana very well m…

Indiana on pace for stellar end to state's budget year

State spending in Indiana generally has recovered from the declines caused by the 2008-2009 Great Recession, while other states continue strug…

State government spent $410.5 million less than it took in during the 2019 budget year that ended June 30, prompting Gov. Eric Holcomb to deci…

MERRILLVILLE — Gov. Eric Holcomb remains committed to growing Northwest Indiana, and he believes the best way to do it is by double-tracking t…

Indiana House Speaker Bosma confirms 2020 session will be his last

A teacher pay hike remains unlikely to be enacted next year by the Republican-controlled General Assembly.

Gov. Eric Holcomb expects to announce in January who will succeed Gary Mayor Karen Freeman-Wilson and Michigan City Mayor Ron Meer on the board that oversees the South Shore Line.