The Indiana Supreme Court has agreed to review the unique legal status of the entity that operates the South Shore commuter rail line linking Northwest Indiana to Chicago.

According to the Indiana Court of Appeals, the Northern Indiana Commuter Transportation District (NICTD) is both an arm of the state for some matters, including not being subject to lawsuits filed in other states, and a political subdivision of Indiana, similar to a city or school corporation, for others.

Clarence Lowe, of Hobart, doesn't believe NICTD can enjoy both statuses at the same time. And, if the Indiana Supreme Court agrees, Lowe may be able to pursue his claim for damages against NICTD after he allegedly was injured working on the railroad.

According to court records, Lowe was manually hammering spikes into frozen railroad ties on Jan. 12, 2018, on a portion of the track in Chicago when he claims he injured his shoulders because NICTD failed to provide proper hydraulic equipment.

Records show Lowe filed suit against NICTD in Cook County, Illinois, on April 3, 2018. The case was dismissed Dec. 18, 2018 because NICTD, as part of the state of Indiana, did not give its consent under the 11th Amendment to the U.S. Constitution to being sued in Illinois.

While the Illinois case was pending, Lowe served notice of a tort claim with the Indiana attorney general on Oct. 2, 2018 — 263 days after Lowe was injured, according to court records.

Lowe then filed a new lawsuit against NICTD in Porter County on Jan. 18, 2019, largely reiterating his claims from the Illinois lawsuit.

Porter Superior Judge Jeffrey Clymer ruled in favor of NICTD July 30, 2020, after Clymer concluded Lowe's tort claim notice was not submitted within the 180-day period required under Indiana law to seek legal damages from a political subdivision of the state, records show.

In a 3-0 decision, the Indiana Court of Appeals affirmed Clymer's ruling on March 2, 2021.

Lowe argues, in his request for review by the state's highest court, he is entitled under federal railroad law to sue NICTD as an arm of the state for injuries suffered on the job within 270 days, not the 180 day limit specified in Indiana law for tort claims against political subdivisions.

He claims the Court of Appeals squeezed him in a "procedural trap" by failing to recognize Lowe substantially complied with the tort claim notice requirement by alerting the attorney general to his case within 263 days of his injury.

NICTD, meanwhile, is urging the Supreme Court to uphold the Porter County decision because even though NICTD's status as both part of the state of Indiana and a political subdivision is unique, it repeatedly has been recognized as valid in Indiana and Illinois courts for decades.

"Lowe undisputedly failed to provide NICTD a notice of tort claim within 180 days of his injury, so NICTD was entitled to summary judgment," the commuter railroad said.

The Supreme Court has scheduled oral arguments in the case for 8 a.m. Region time Sept. 16 at its courtroom inside the Statehouse in Indianapolis.

A ruling by the five justice panel is likely to be issued by the end of the year, or in early 2022. 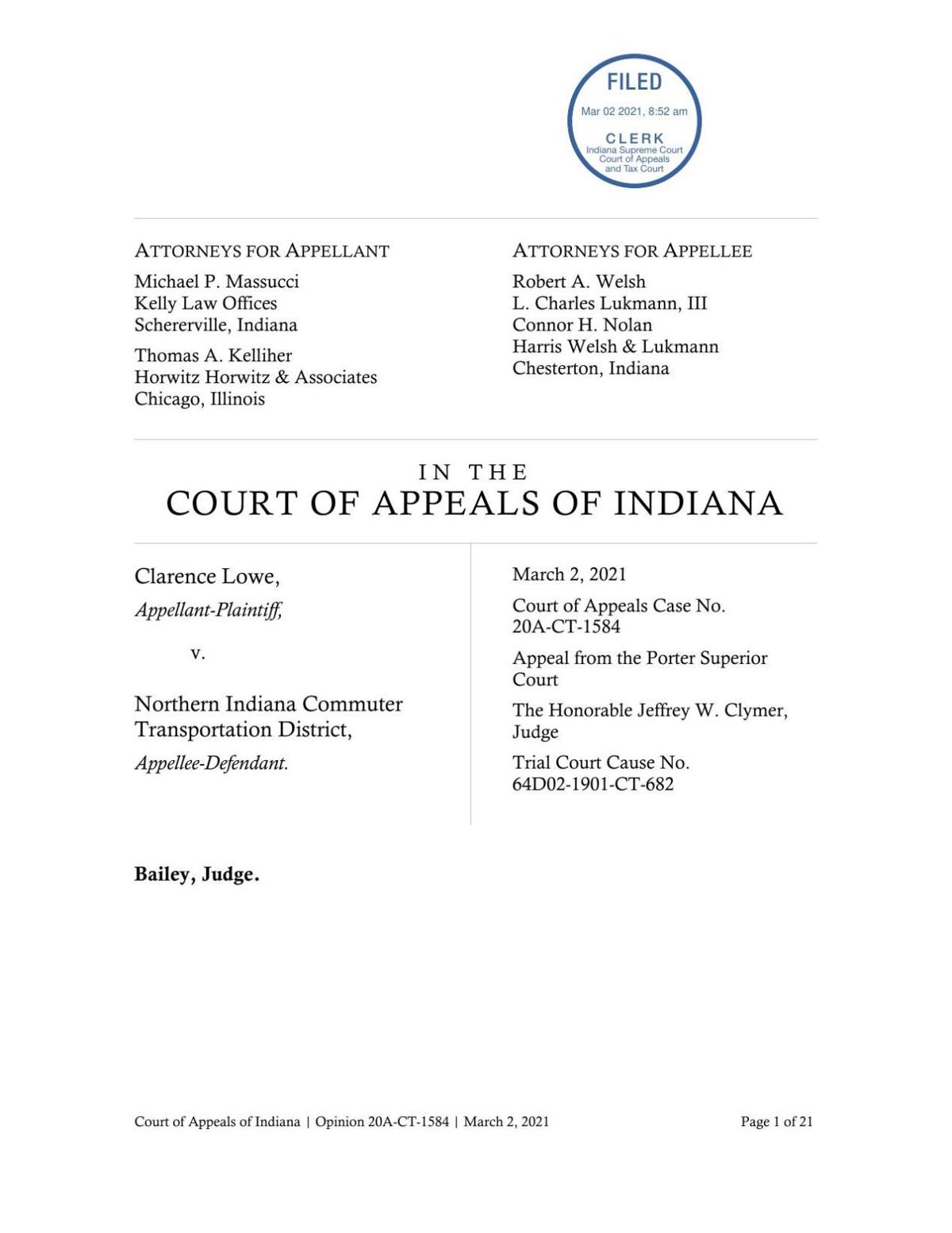 The Michigan City community will have the opportunity to comment on a proposed transit development district that would include much of their main business districts.

The reconfiguration of U.S. 12 and U.S. 20 through Gary’s Miller neighborhood is set to begin as early as Thursday.

A bid opening early this month revealed a proposal to perform the railroad, bridge and train station work for about $400 million, far exceeding engineers' estimates that anticipated a price of about $228 million.

The bids were substantially higher than anticipated, with the low bid 75% higher than the estimate of approximately $228.6 million.