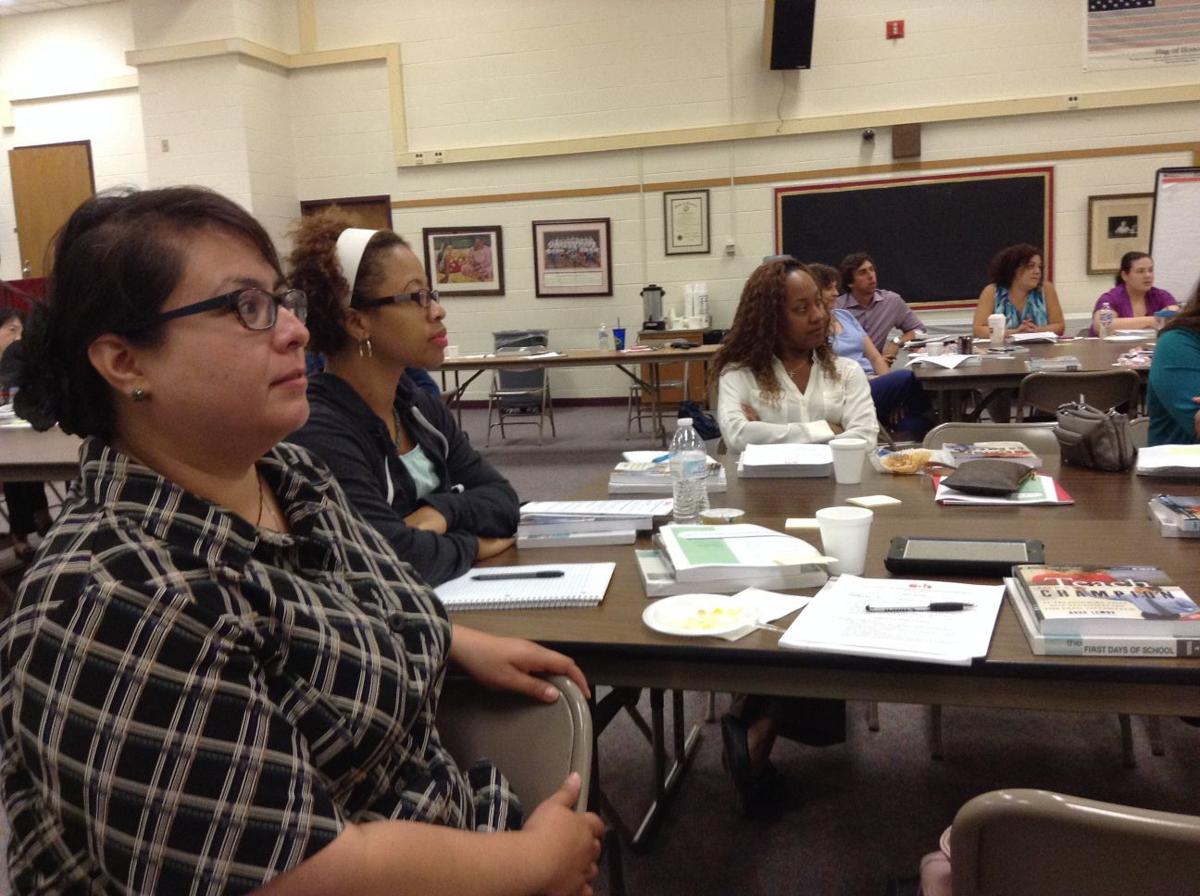 Linda Ramos, far left, is one of 30 new teachers in the School City of Hammond. She listens during orientation in early August. She will teach special education at Clark Middle School this fall. 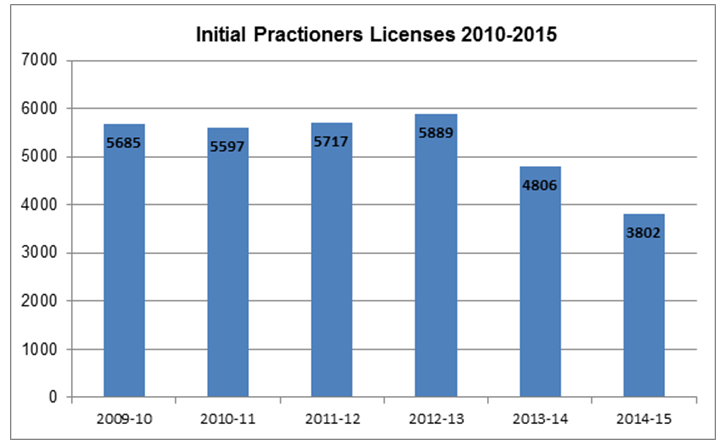 INDIANAPOLIS | A key factor in Indiana's teacher shortage is that Hoosier college students are less interested in becoming teachers than they used to be.

Federal data presented Thursday to the state's Blue Ribbon Commission on the Recruitment and Retention of Excellent Educators show a dramatic decline in both enrollment in teacher preparation programs and new teacher licenses.

Likewise, initial practitioner licenses issued by the Indiana Department of Education plummeted to 3,802 during the 2014-15 school year from 5,685 licenses five years earlier. That's a 33 percent drop.

While most occupations easily could weather a similar decline in new recruits, the reduced interest in teaching has been immediately felt by school superintendents and principals across the state tasked with finding classroom leaders.

That's because 6 percent of the state's teaching force every year is first-year teachers. Teachers with one to five years of experience make up 21 percent of Indiana's 59,216 educators, according to the Department of Education.

Altogether, teachers with 10 or fewer years of experience comprise 47 percent of Indiana's classroom workforce, making the decline in new teachers an urgent issue for schools, parents and children.

"We are concerned about the number of teachers coming into the profession, and the work we're going to be doing here for the commission is to come up with some strategies to turn that around," said Glenda Ritz, state superintendent of public instruction and commission co-chairwoman.

The 50-member panel identified numerous potential causes of weak teacher recruitment, including Indiana's lackluster teacher salaries compared to neighboring states, but did not immediately settle on any solutions.

Jeannette Melcic, a School City of Hammond science teacher for more than two decades, urged the commission to consider finding ways to encourage new teachers to consider their jobs as careers, rather than short-term experiences on the road to something else.

"A lot of the younger teachers that I come into contact with, they don't seem like they're here for a teaching career — they're here for a stepping stone," Melcic said. "They're getting loans paid off, they're becoming administrators, they're not there to teach for the long run."

The commission is set Oct. 5 to evaluate and rate the various teacher recruitment ideas it came up with Thursday, and likely will blend them with the teacher retention strategies devised at its first meeting.

The overall goal is to work toward a set of legislative proposals addressing the teacher shortage that state lawmakers can consider and act on starting in January.

VALPARAISO | Steven Byers was in seventh grade at Benjamin Franklin Middle School in Valparaiso when he developed an avid interest in science,…

LAKE STATION | Around the house, they call him the senator.

TONY LUX: Surprised there is a teacher shortage? Really?

It is amazing to read about the blue ribbon committees being formed at the Statehouse to determine why there is a teacher shortage. The feigne…

INDIANAPOLIS | State lawmakers got a sampling Monday of the complexity of Indiana's teacher shortage and heard a variety of ideas to alleviate it.

INDIANAPOLIS | The widely reported teacher shortage affecting Indiana schools is a myth, and the state has more than enough educators to meet …

INDIANAPOLIS | Three members of the State Board of Education, who have been persistent thorns in the side of Chairwoman Glenda Ritz, are lobby…

Linda Ramos, far left, is one of 30 new teachers in the School City of Hammond. She listens during orientation in early August. She will teach special education at Clark Middle School this fall.