CROWN POINT — The Lake County Sheriff's Department ultimately might have an easier time getting approval for its various purchases if the Lake County Council succeeds in its lawsuit that aims to wrest control of county purchasing from the Lake County commissioners.

In the meantime, however, the commissioners are putting off action on most sheriff's office purchasing while the lawsuit between the county's legislative branch (council) and executive branch (commissioners) is pending.

On Wednesday, the two Democratic and one Republican commissioners unanimously agreed to indefinitely postpone $197,699.20 in sheriff purchase requests after previously opting to defer action on most of the purchases from meeting to meeting.

Commissioner Jerry Tippy, R-Schererville, said postponement accords with the advice of legal counsel concerning the commissioners' exclusive authority to negotiate contracts on behalf of the county.

The council contends it should be making those decisions, instead of the commissioners, based on a never-implemented 1981 Indiana statute that appears to delegate purchasing authority in Lake County to the council.

Commissioner Mike Repay, D-Hammond, said the sheriff needs to convince the commissioners of his genuine need for the equipment — just as leaders of other county departments regularly do — if he hopes to ever receive it.

Sheriff Oscar Martinez said following the meeting: "This is a clear attempt to sabotage and disrupt operations of the Lake County Sheriff’s Department and should not be tolerated."

"These are purchases we can clearly afford because the funding is in the budget," Martinez said. "What we cannot afford is delays that could put the citizens of Lake County and county employees at risk."

Likewise, Councilman Christian Jorgensen, R-St. John, contends the commissioners simply do not have the authority to withhold a department head's request for equipment after the money for the equipment has been appropriated by the council.

The lawsuit that may settle the issue is in a holding pattern after Lake Circuit Judge Marissa McDermott last week recused herself from presiding over the case due to an unspecified conflict of interest. 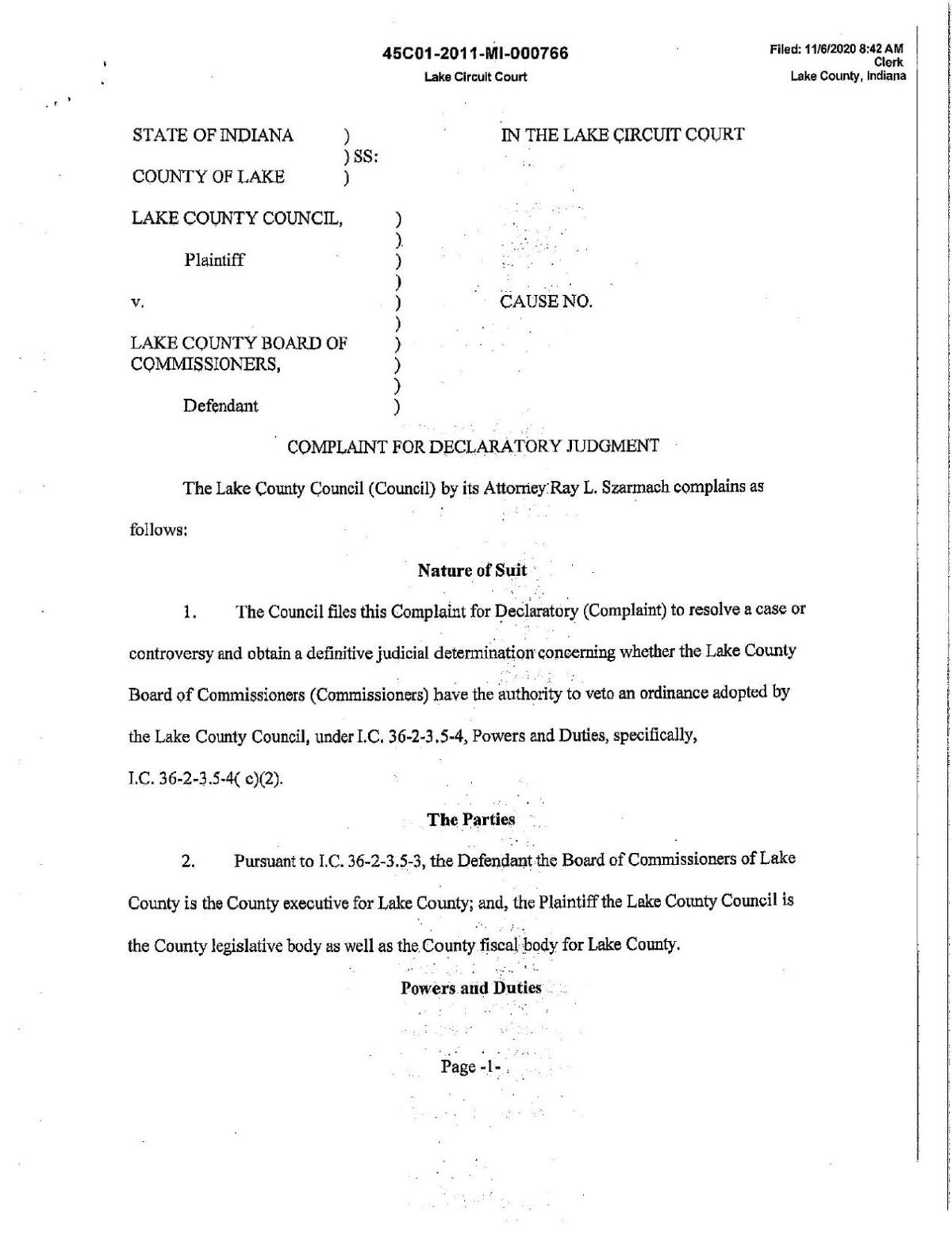 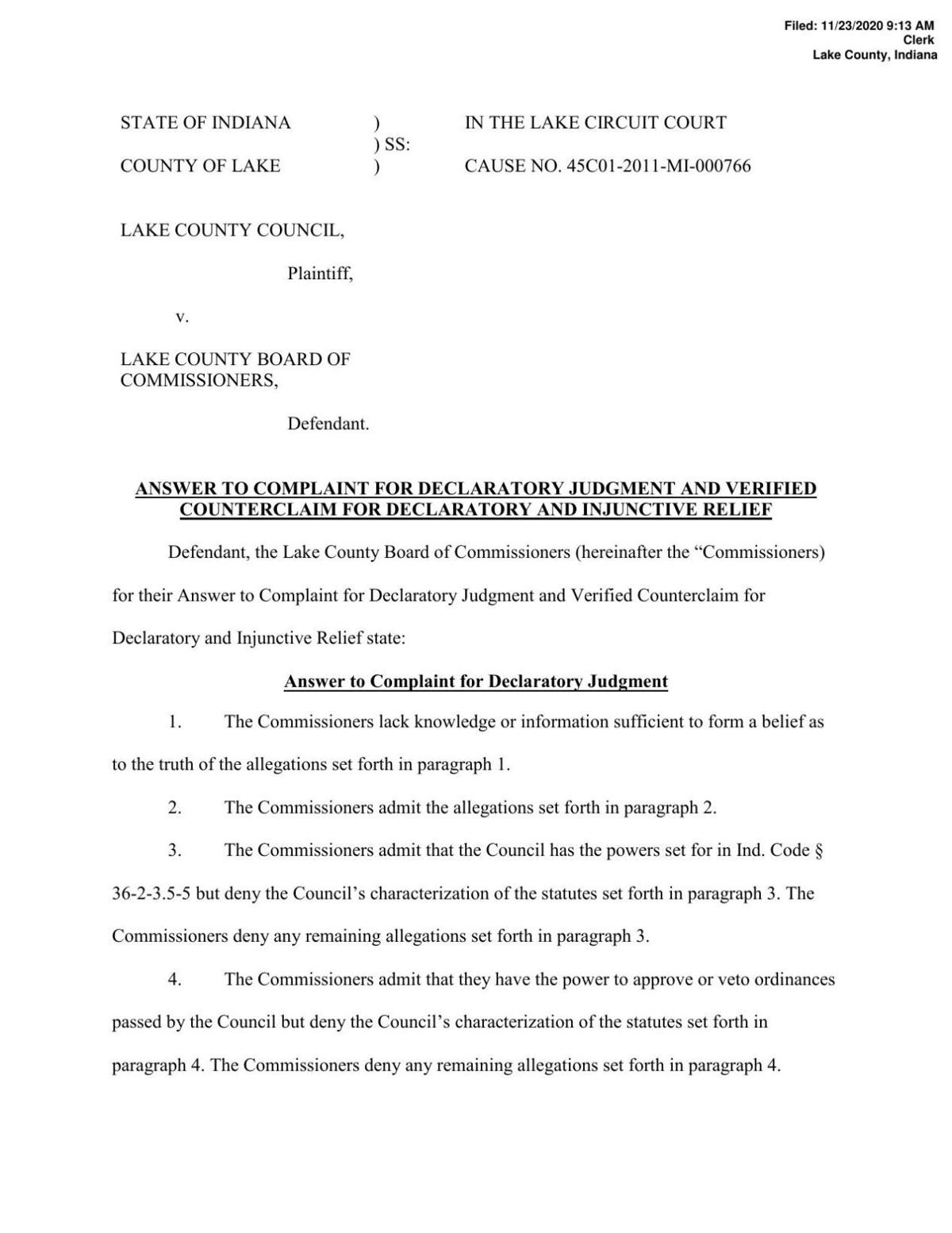 The commissioners are seeking to dismiss a lawsuit seeking clarification on whether council ordinances taking control of county government purchasing and data processing were legitimately vetoed.

The $255 million Lake County spending plan for 2021 will take effect Jan. 1 after winning final approval Wednesday by the county commissioners.

The Lake County Commissioners unanimously rejected Friday an attempt by the Lake County Council to seize control of the county's purchasing and data processing departments.

The council tentatively agreed to take one of the sheriff's requested purchases that has been postponed by the commissioners and resubmit it for commissioner approval as a county council spending item.

A week after the Lake County Commissioners put off for a second time the sheriff's proposal to spend $23,560 on thermometer system kiosks, the council voted to resubmit the purchase in its name for action by the commissioners.

An Illinois man stopped for driving 98 miles per hour in a 55 mph zone on the Borman Expressway in Gary is facing a bevy of criminal charges after police got a look at what he had inside his vehicle.

The legislative and executive branches of Lake County government are continuing to clash over various purchases requested by the Lake County sheriff.

Retroactive law may be partial fix to legal dispute between Lake Council, Commissioners

The commissioners voted 3-0 at a special meeting Wednesday to purchase 18 new Ford police utility vehicles from Bosak Ford for $35,352.50 per vehicle.