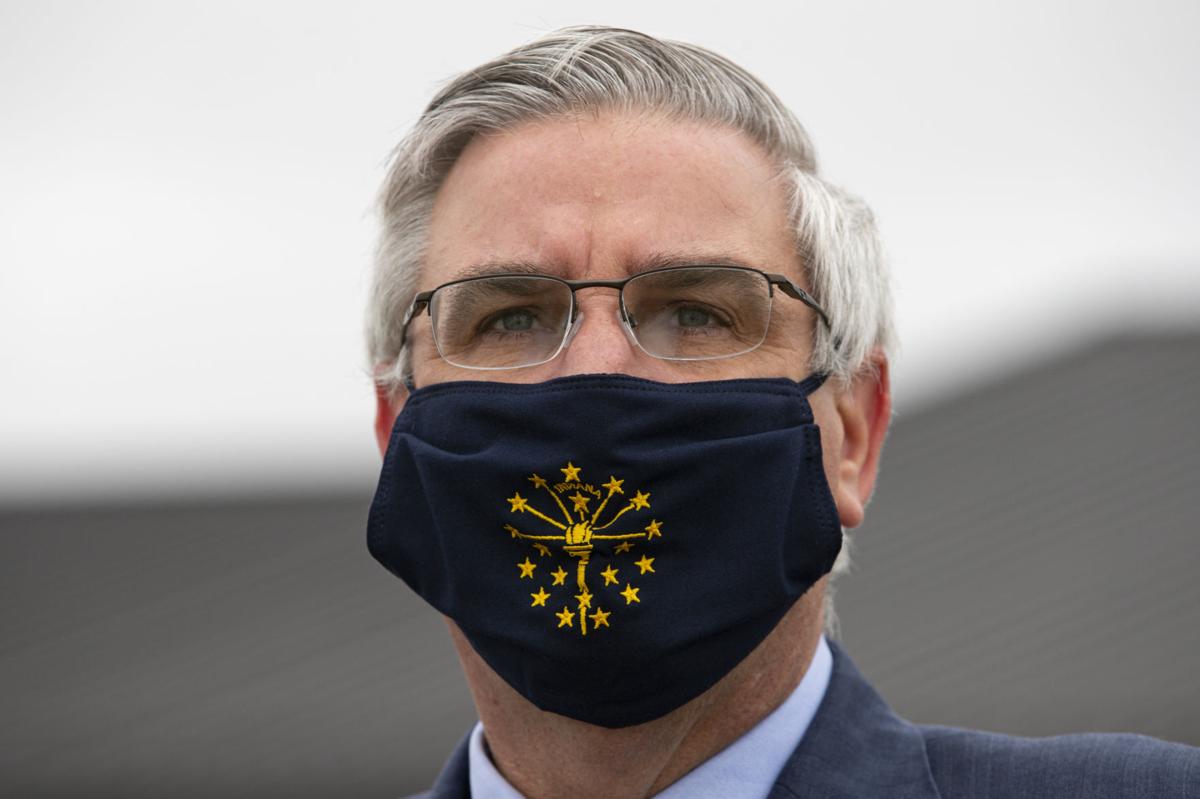 A legal furor is brewing over Gov. Eric Holcomb's order for all Hoosiers, beginning Monday, to wear a face covering in public places when social distancing is not possible 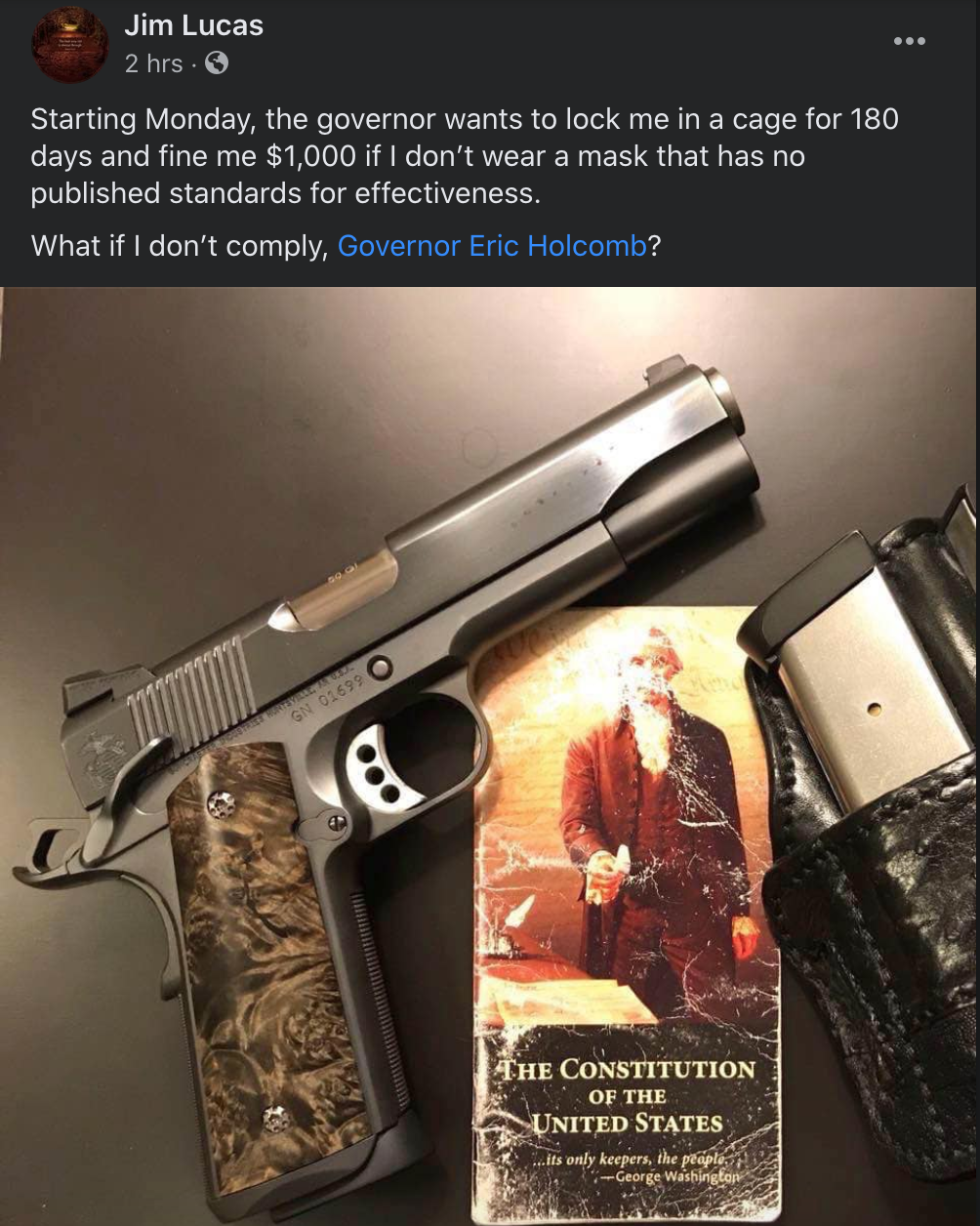 The Democrat, former Evansville Mayor Jonathan Weinzapfel, said while he expects to disagree with Republican state leaders on many issues if he's elected Nov. 3, taking reasonable protections to minimize the spread of COVID-19 is not one of them.

"With the growing number of coronavirus cases across the state, I believe that Gov. Holcomb made the right call," Weinzapfel said. "Wearing a mask is essential to stopping the spread and keeping Hoosier families safe, especially our kids as they prepare to return to school."

Weinzapfel explained that under Indiana law the governor clearly has the authority during a public health emergency to institute a statewide mask requirement, and Weinzapfel said he gladly would defend it in court.

Meanwhile, the person normally tasked with defending the governor in court is overtly aiding the Republican state lawmakers most likely to ask a judge to strike down the governor's facial coverings directive.

Attorney General Curtis Hill issued a nonbinding official opinion Wednesday that claims Holcomb does not have the legal authority to issue a mask mandate, or impose criminal penalties of up to six months in jail and a $1,000 fine for people who refuse to wear a mask in public when social distancing is not possible.

Hill said if Holcomb wants to force Hoosiers to wear masks, the governor must call the Republican-controlled Legislature into session and ask the peoples' representatives to approve the mandate.

"For Hoosiers, whose lives and livelihoods are on the line, to have a voice in how we continue to deal with the virus, it is critical that the General Assembly assume its constitutional role," Hill said.

On the other hand, former U.S. Rep. Todd Rokita, a Munster native, who defeated Hill for the Republican attorney general nomination two weeks ago, is neither directly condemning the governor nor calling for a special session of the General Assembly.

Rokita said in a statement issued Thursday he wants to work with state lawmakers after taking office next year to clarify the governor's emergency management powers, and in doing so used a term for COVID-19 that some Hoosiers consider racist.

"Our laws did not anticipate the situation we have today and it has raised valid concerns about individual liberty while protecting public health," Rokita said.

"Our emergency disaster law, like those in other states, was written with short term incidents like floods, explosions, contamination spills, localized health endangerment, or even acts of terrorism in mind. The word 'temporary' exists repeatedly within this law. This Chinese virus has impacted our health, our economy, people’s paychecks and our kids education for months."

In fact, "epidemic" and "public health emergency" both specifically are listed among the 30 potential disasters under which Holcomb can unilaterally trigger the broad powers available to the governor to respond to widespread or severe damage, injury, or loss of life or property.

During a disaster, Indiana law explicitly authorizes the governor to "employ any measure and give any direction" in accordance with the recommendations of the State Department of Health or local boards of health.

Holcomb said Thursday he's confident his mask order is permitted under the statute.

"I don't live under the threat of lawsuit. We do our research before we speak," Holcomb said.

In southern Indiana, however, state Rep. Jim Lucas, R-Seymour, appeared to issue a different kind of threat against the governor in response to the mask mandate.

Lucas posted a photo of a handgun and a pocket copy of the U.S. Constitution on his Facebook page Thursday under a statement questioning the effectiveness of face masks and asking: "What if I don't comply Governor Eric Holcomb?" 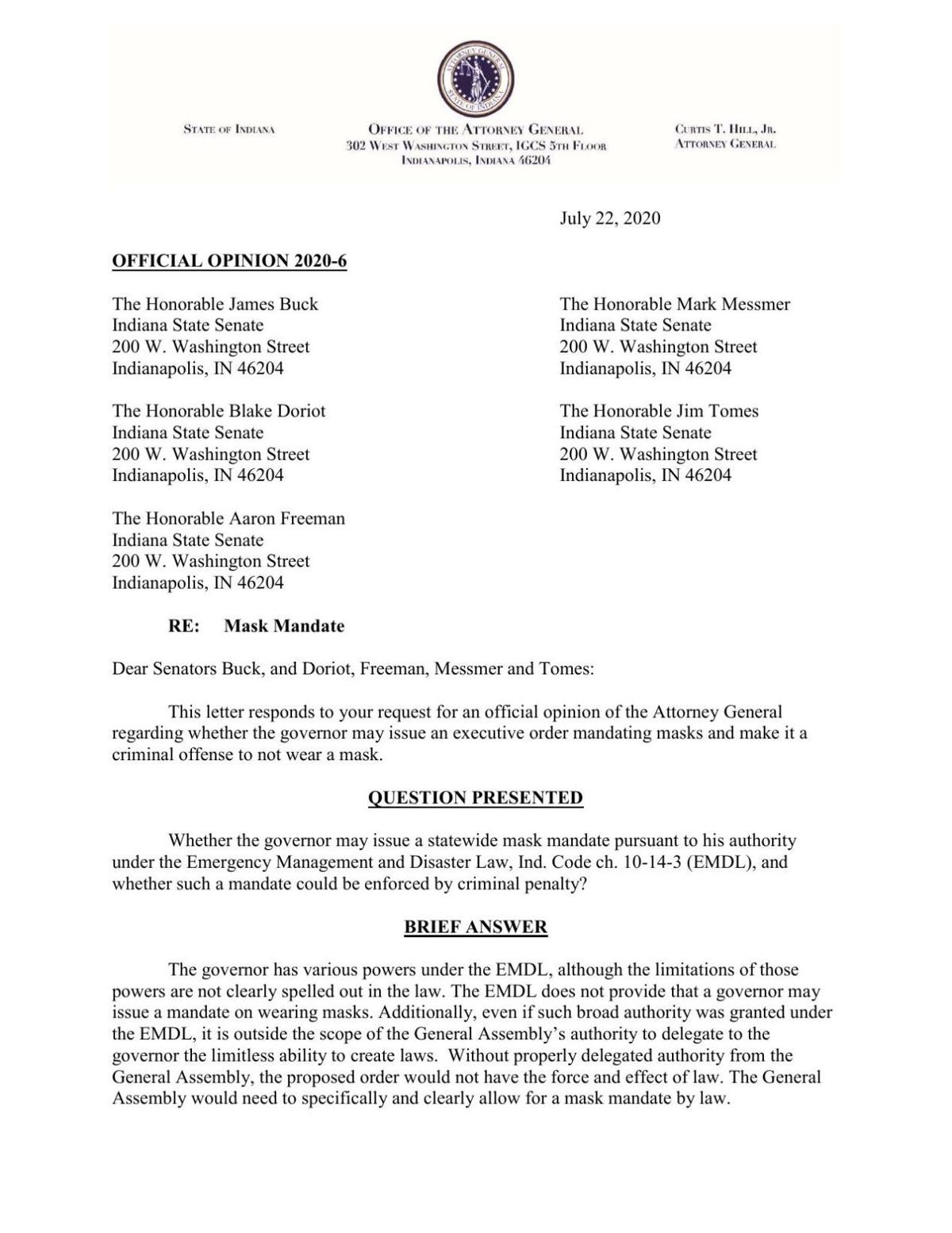 Here's where masks, face coverings are required in the Region

“Without properly delegated authority from the General Assembly, the proposed order would not have the force and effect of law,” Curtis Hill said in a letter to lawmakers Wednesday night.

Dr. Chandana Vavilala, Lake County's health officer, said Monday she determined a mask order is needed to minimize the spread of the coronavirus.

The Lake County Health Department does not have the staff or resources to ensure full compliance with its order that everyone in the county wear face masks in public places when social distancing is not possible.

Gov. Eric Holcomb is keeping the reopening of Indiana's economy on pause for at least two more weeks.

U.S. Sen. Mike Braun will not support a fourth federal coronavirus relief package if it substantially adds to the $26 trillion national debt.

Masks for NWI Healthcare Workers announced it is ending organized pick-up and drop-off of masks to local facilities by the end of July.

Gov. Eric Holcomb is highlighting the Hoosier unity spurred by COVID-19 in the first television ad of Indiana's 2020 gubernatorial contest.

Dr. Kristina Box is confident the number of new COVID-19 cases among students, teachers and parents can be minimized if Indiana schools follow state safety guidance.

Gov. Eric Holcomb is working to ensure Indiana schools receive full tuition support for each of their students, even if the students forego in-person instruction due to the coronavirus pandemic.

A legal furor is brewing over Gov. Eric Holcomb's order for all Hoosiers, beginning Monday, to wear a face covering in public places when social distancing is not possible