Five metropolitan areas across Indiana, including Michigan City-LaPorte, will retain that designation for at least another decade — along with the enhanced federal aid that comes with it — instead of being downgraded to micropolitan communities.

The federal Office of Management and Budget (OMB) recently backed off a proposal to set 100,000 as the minimum population needed to be considered a metropolitan area, instead of 50,000 residents.

OMB officials favored the change because the nation's population has doubled since the metropolitan threshold was set in the 1950s, so it made sense to similarly double the minimum population required to qualify as a metropolitan area.

However, OMB said bipartisan opposition to the proposal, including by U.S. Sens. Todd Young and Mike Braun, both Republicans from Indiana, spurred the agency to decide instead to keep the current 50,000 resident threshold for at least another 10 years.

"The proposed change would have excluded Terre Haute, Columbus, Kokomo, Michigan City-LaPorte, and Muncie from this important designation, making it more difficult for these communities to receive federal resources for housing, transportation, health care and more," Young said.

Braun added, "This would have negatively impacted not only the municipalities themselves, but caused a ripple effect for constituents in the broader region that rely on these cities as economic drivers in their areas of the state."

"If the Office of Management and Budget had implemented the recommendation of the Metropolitan Statistical Review Committee, the Michigan City-LaPorte area would have been negatively impacted by the inability to apply for federal funding," Dermody said.

"As well, the Michigan City-LaPorte area would no longer appear in site selector or company-directed searches using MSAs as a filter or a source of data."

"Keeping the metropolitan designation at 50,000 will allow Kokomo to continue to compete with other larger metropolitan areas for economic development," Moore said.

"We want to personally thank Senator Braun and Senator Young for their support in opposing that proposed change which will allow the Kokomo area to continue its progress in growth." 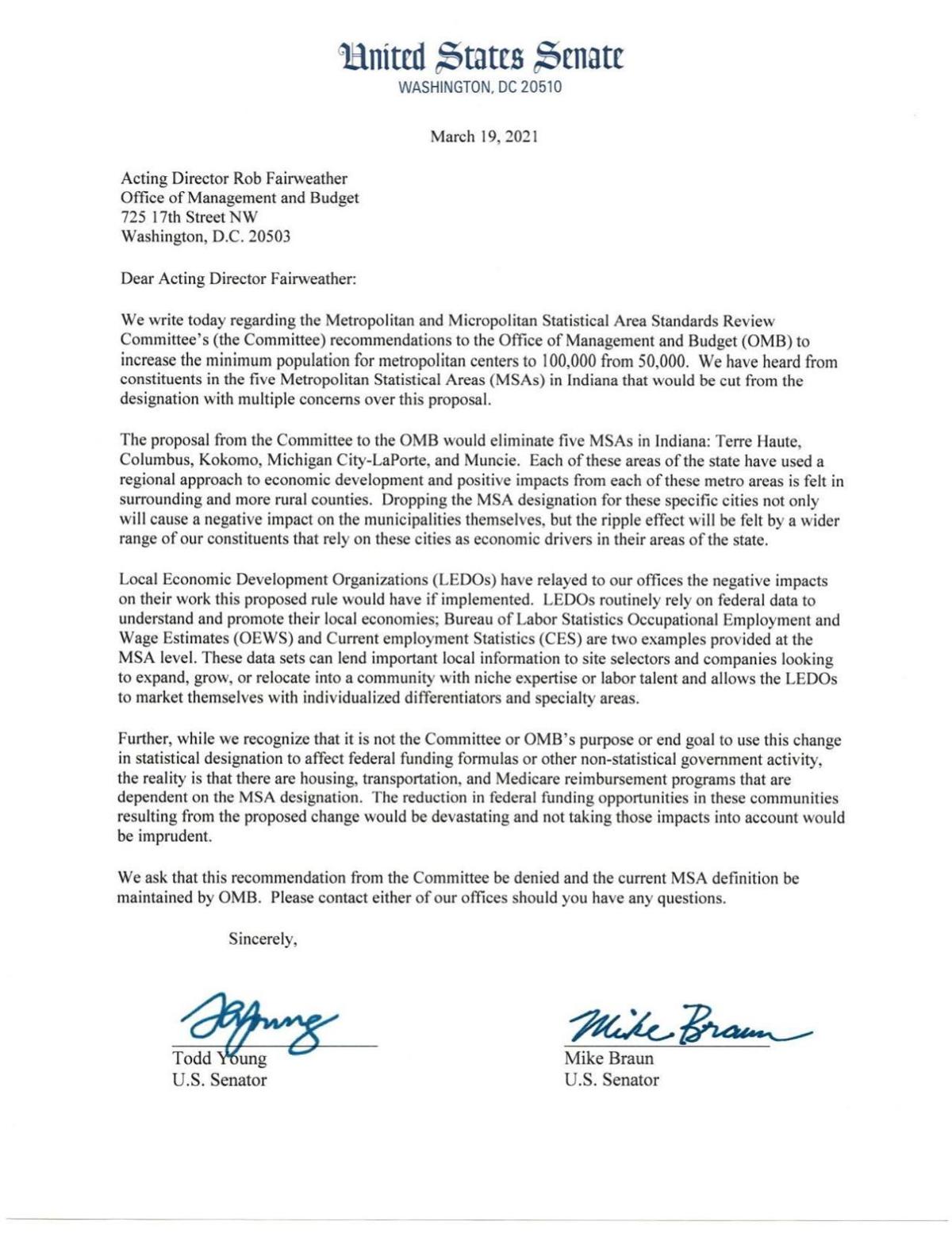 Indiana crossed an important threshold in its fight against COVID-19 Wednesday with exactly half the state's residents age 12 and up now considered fully vaccinated against the coronavirus.

Data released Wednesday by the Indiana Department of Health show 17 of the state's 92 counties classified as "yellow," with moderate community spread of COVID-19, up from just 6 yellow counties last week.

Biologists at the Indiana Department of Natural Resources are confirming a black bear is present in rural Vanderburgh County, about 16 miles north of Evansville.

The State Budget Committee has authorized spending on two Northwest Indiana public safety projects that together will contribute nearly a half-billion dollars to the Region's economy in the years ahead.