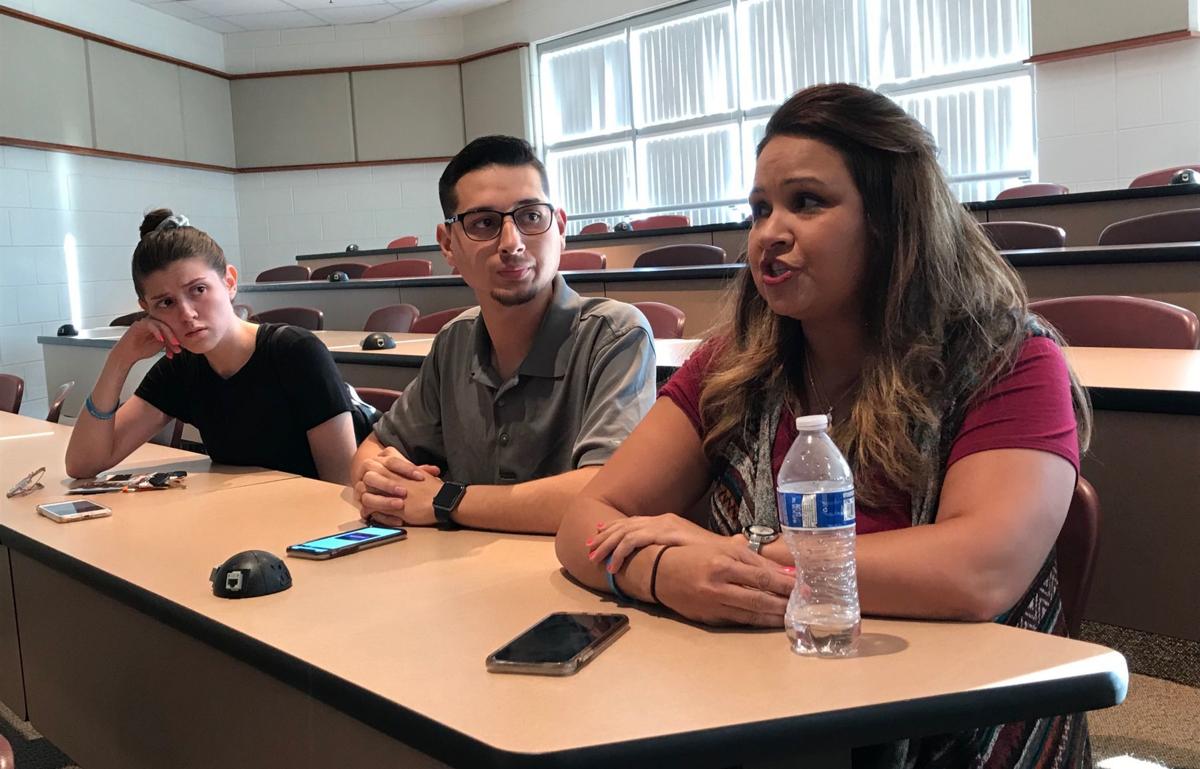 Yolando Coriano, right, speaks during a presentation Tuesday hosted by state Rep. Lisa Beck, D-Hebron, at Crown Point High School. Coriano is the mother of Julian Tinoco, who died after a December crash along 109th Avenue in Winfield. She was accompanied by Julian’s brother, Jose Tinoco, and girlfriend Jessica Sanchez. 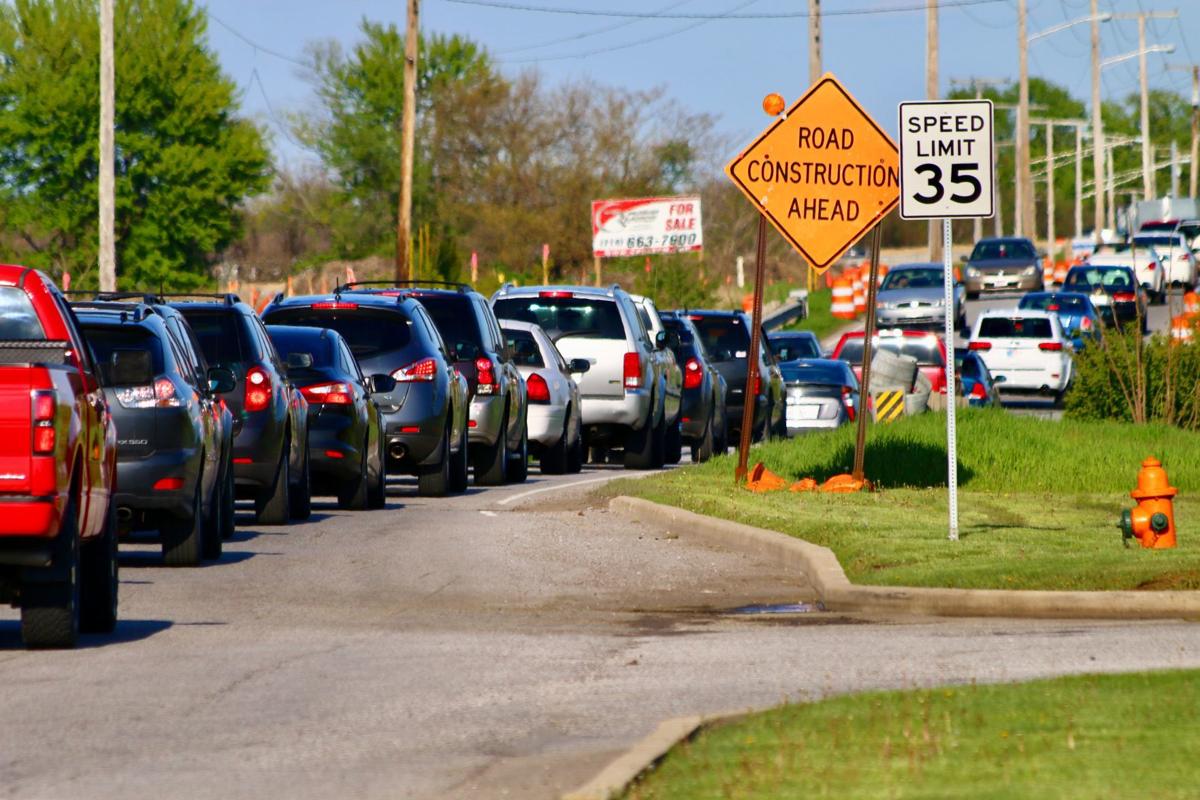 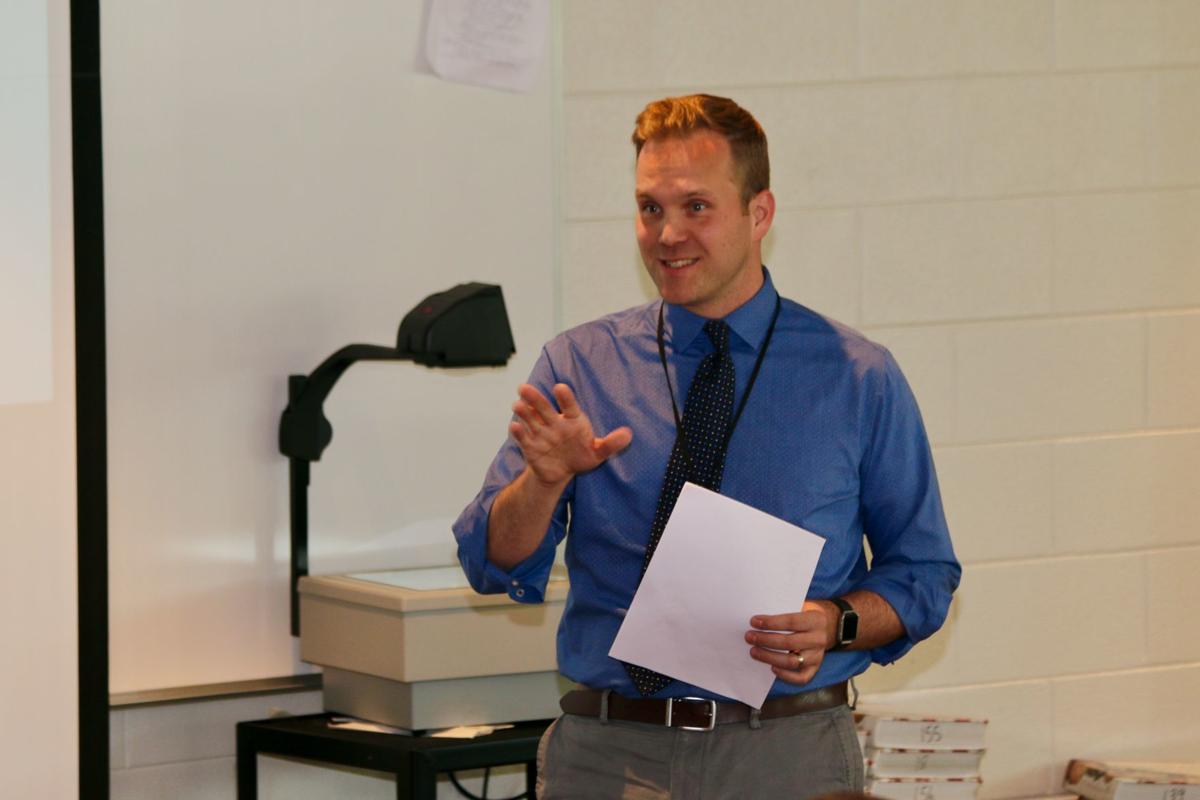 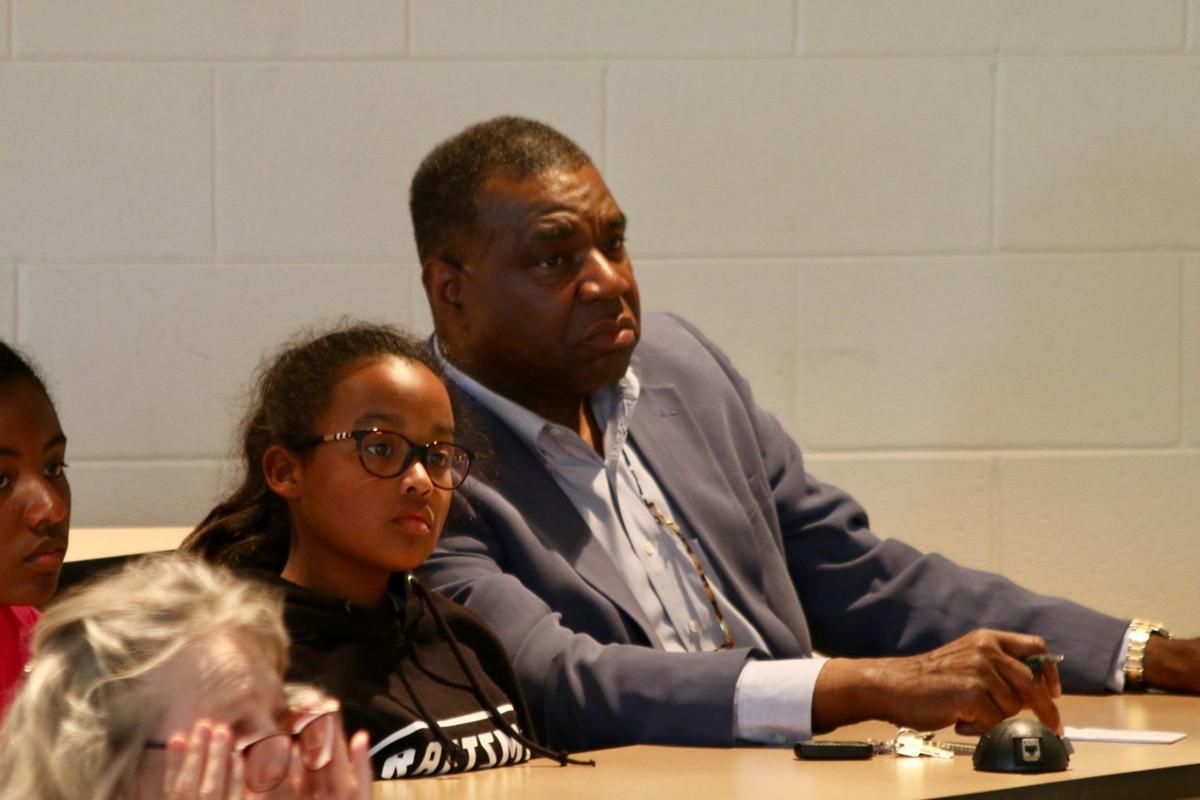 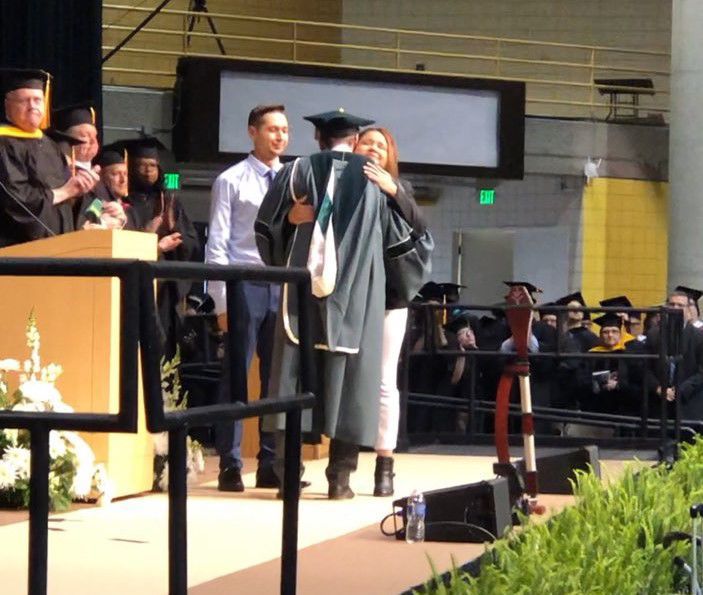 With her son Jose Tinoco, Yolanda Tinoco accepts a degree from Ivy Tech Community College Saturday on behalf of her son, Julian Tinoco, who was killed in a crash in December on 109th Avenue in Winfield. Valparaiso Chancellor Aco Sikoski gave the family hugs after presenting Julian's diploma during the commencement ceremony. 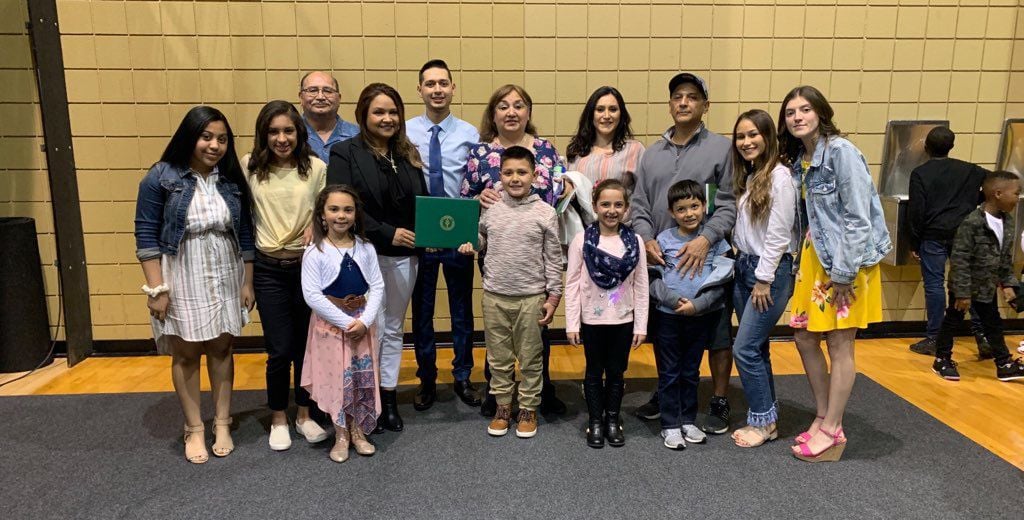 Yolanda Tinoco, center, poses with extended family Saturday after accepting a degree from Ivy Tech Community College on behalf of her son, Julian Tinoco, who was killed in a crash in December on 109th Avenue in Winfield.

CROWN POINT — The mother of a man who died after a December crash along 109th Avenue has a message for local politicians and community members: “We can’t wait; it’s time to put on the pressure.”

“I used to sit back and say, ‘This is such a bad road,’" said Yolanda Coriano, the mother of Julian Tinoco. "I just complained and never did anything. Because of my horrific loss, I have to raise awareness to actually see something done to 109th Avenue.

“We can’t just complain. We have to do something now and put one step forward. Tragedies will keep happening on that road if we don’t.”

Tinoco, 20, of Winfield, died Dec. 10 after Richard Westerhoff, 30, of Lake Station, crossed a center line and struck three vehicles on 109th Avenue near Deer Creek Drive, Winfield police said. Westerhoff and two other people were injured in the crash.

If conditions along 109th Avenue were different, Coriano said, she believes her son might have survived.

“Not having a shoulder played a role in it. The two other people had ditches to go into. My son didn’t have that opportunity,” Coriano said.

The event, cohosted by the Indiana Department of Transportation, gave an overview of roadwork projects planned for the next three years in House District 19, which runs roughly between Crown Point and Lakes of the Four Seasons, and north to Hobart.

About $10 billion is being invested in statewide INDOT projects from 2018-2023, INDOT spokesman Matt Deitchley said.

Over the next three years, five roadway preservation and 16 bridge rehabilitation projects will be constructed with INDOT help. Some projects include the current bridge closure of 101st Avenue over I-65 (expected to open in mid-September), added left turn lanes in the Crown Point area at U.S. 231 and Delaware Parkway, and a roundabout being installed at U.S. 231 and Cline Avenue.

“Our goals for safety projects is about how can we reduce severely or completely eliminate injury accidents,” Deitchley said.

The hot topic that dominated the presentation, though, was the plans for 109th Avenue — specifically the town of Winfield’s portion, which goes from the Lake/Porter county line to Colorado Street.

The stretch of roadway will cost $28 million to fix, Town Council President Gerald Stiener said during a March Town Council meeting. With an annual budget of $3 million, it’s impossible for the town to afford on its own.

The installation of turn lanes and traffic signals where 109th Avenue intersects with Colorado, Arizona and State streets and Grand Boulevard is just a small portion of what needs to be done.

With the area’s roads not being owned by the state, Deitchley said, there isn’t much INDOT can do to help the town.

“Part of the biggest problem – challenge – for this area in general is the booming population. Unfortunately, no one asked us for permission before they opened a new subdivision. We have to handle traffic and same thing goes for the locals. It’s not uncommon in a lot of communities, but we have to find a way to solve it,” Deitchley said.

Residents, including Lake County Prosecutor Bernard Carter, questioned the INDOT official and pointed at the Interstate 65 and 109th Avenue interchange as blame for the road's heavy traffic flow.

The interchange, which opened officially in 2010, was a $17.7 million project funded from $10 million secured by U.S. Rep. Pete Visclosky, D-Ind., in the 2005 federal highway bill and another $20 million from the Indiana Department of Transportation.

“The problem was created by the state and the state should take some responsibility and help correct this. …When they opened up that exchange, tons, in fact more people from Porter County, started coming down 109th through Randolph Street all the way to Porter County than the people who reside in Winfield or Lakes of Four Seasons. Absolutely more. It’s like a funnel. When you open that up, you created a very hazardous situation for all of the residents out there,” Carter said during the event.

“We got to do something about it. … I think we need to talk to everyone we can to let them know that they have created a very hazardous, death-threatening situation road here. There’s no excuse for it.”

Jose Tinoco, Julian’s brother, accompanied his mother to Tuesday’s event. The family is pushing to bring more awareness to the problems on 109th Avenue.

“Winfield is among one of the fast growing cities in the state since 2016. With that increase in population, there’s no infrastructure that has been kept up with,” said Jose Tinoco, who accepted a degree from Ivy Tech Community College Saturday on behalf of his late brother during the school’s commencement ceremony.

“With the population increases, if we don’t get something done, there’s only going to be more deaths and more accidents and injuries as time goes on. It will only get worse. There is an urgency.”

Deitchey recommended community members reach out to the Northwestern Indiana Regional Planning Commission, a council of local governments serving the citizens of Lake, Porter and LaPorte counties. NIRPC can help pursue federal funding from grants to help pay for needed infrastructure projects like the 109th Avenue in Winfield.

“We can’t just continue to talk about it," Jose Tinoco said. "We need to make some instrumental change happen. If we ask for half of the loaf of bread, we’re only going to get a quarter of it. We need to ask for the full loaf. We need to come strong with what we are trying to do here.”

UPDATE: All lanes opened after spilled honey causes sticky situation on I-94

HAMMOND — A semi overturned early Wednesday on eastbound Interstate 94, spilling diesel fuel and some of the 41,000 pounds of amber honey the …

PORTER TOWNSHIP — A Hebron man died Tuesday night after he disregarded a stop sign, hit a Jeep and was thrown from the motorcycle he was ridin…

CEDAR LAKE — Two horses died after getting loose and being struck by a truck, police say. Another horse was severely injured.

CROWN POINT — More driving headaches are en route for Region drivers, including months of ramp closures at a key Interstate 65 interchange in …

WINFIELD — As Winfield Town Council President Gerald Stiener said, it’s no secret that heavily-traveled 109th Avenue is a big problem and has …

Did your road make the list for needed repair in Crown Point?

CROWN POINT — Roads have been a hot topic in Crown Point and now, thanks to the newly published Transportation Asset Management Plan, resident…

WINFIELD — What can be done to improve road safety and traffic capacity on the often congested 109th Avenue in Winfield?

CROWN POINT — Is a roundabout the right solution for the frequent traffic backups at the intersection of 109th Avenue and Cline Avenue, where …

Yolando Coriano, right, speaks during a presentation Tuesday hosted by state Rep. Lisa Beck, D-Hebron, at Crown Point High School. Coriano is the mother of Julian Tinoco, who died after a December crash along 109th Avenue in Winfield. She was accompanied by Julian’s brother, Jose Tinoco, and girlfriend Jessica Sanchez.

With her son Jose Tinoco, Yolanda Tinoco accepts a degree from Ivy Tech Community College Saturday on behalf of her son, Julian Tinoco, who was killed in a crash in December on 109th Avenue in Winfield. Valparaiso Chancellor Aco Sikoski gave the family hugs after presenting Julian's diploma during the commencement ceremony.

Yolanda Tinoco, center, poses with extended family Saturday after accepting a degree from Ivy Tech Community College on behalf of her son, Julian Tinoco, who was killed in a crash in December on 109th Avenue in Winfield.