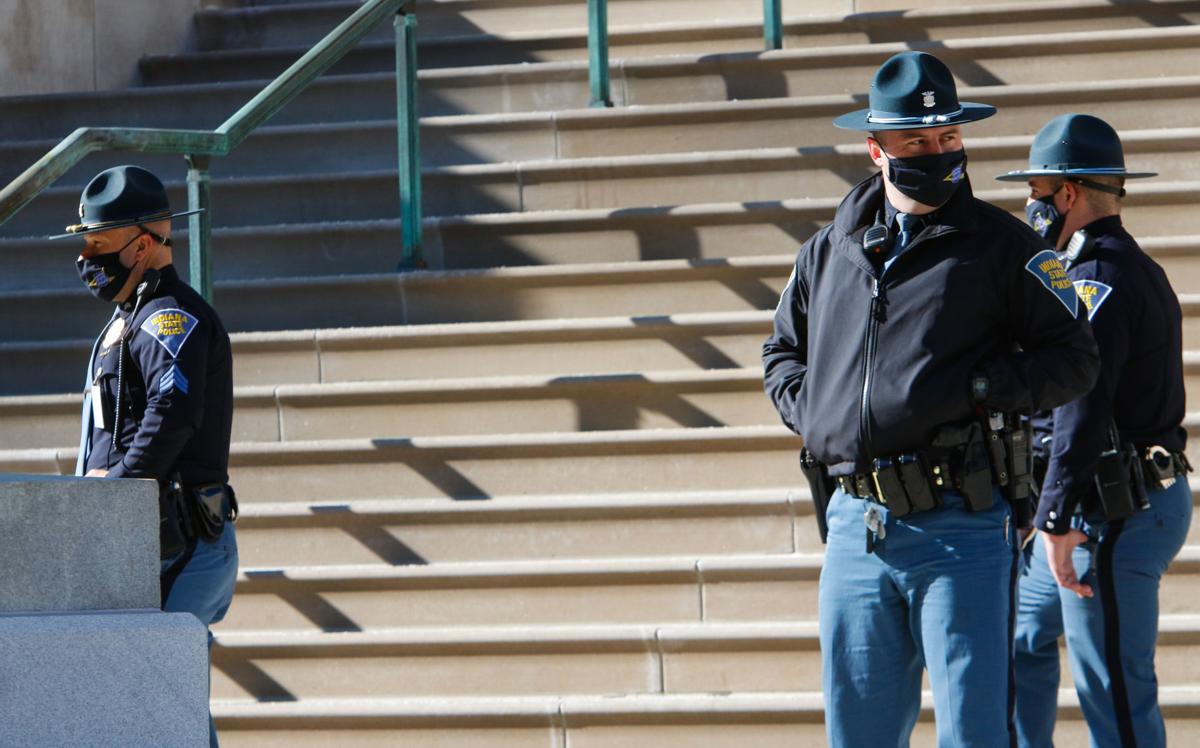 Indiana State Police troopers keep watch outside the eastern side of the Indiana Statehouse on Wednesday in Indianapolis. 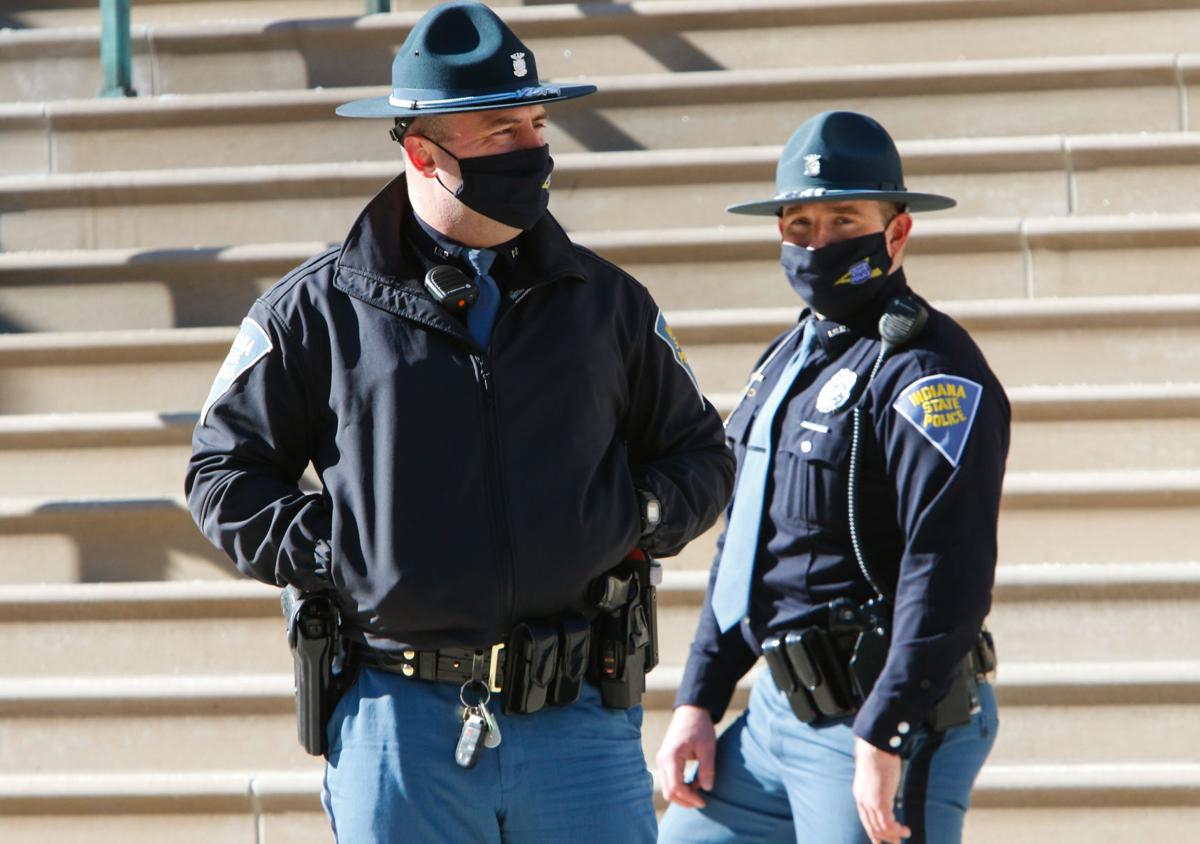 Indiana State Police troopers monitor the eastern side of the Indiana Statehouse on Wednesday in Indianapolis. 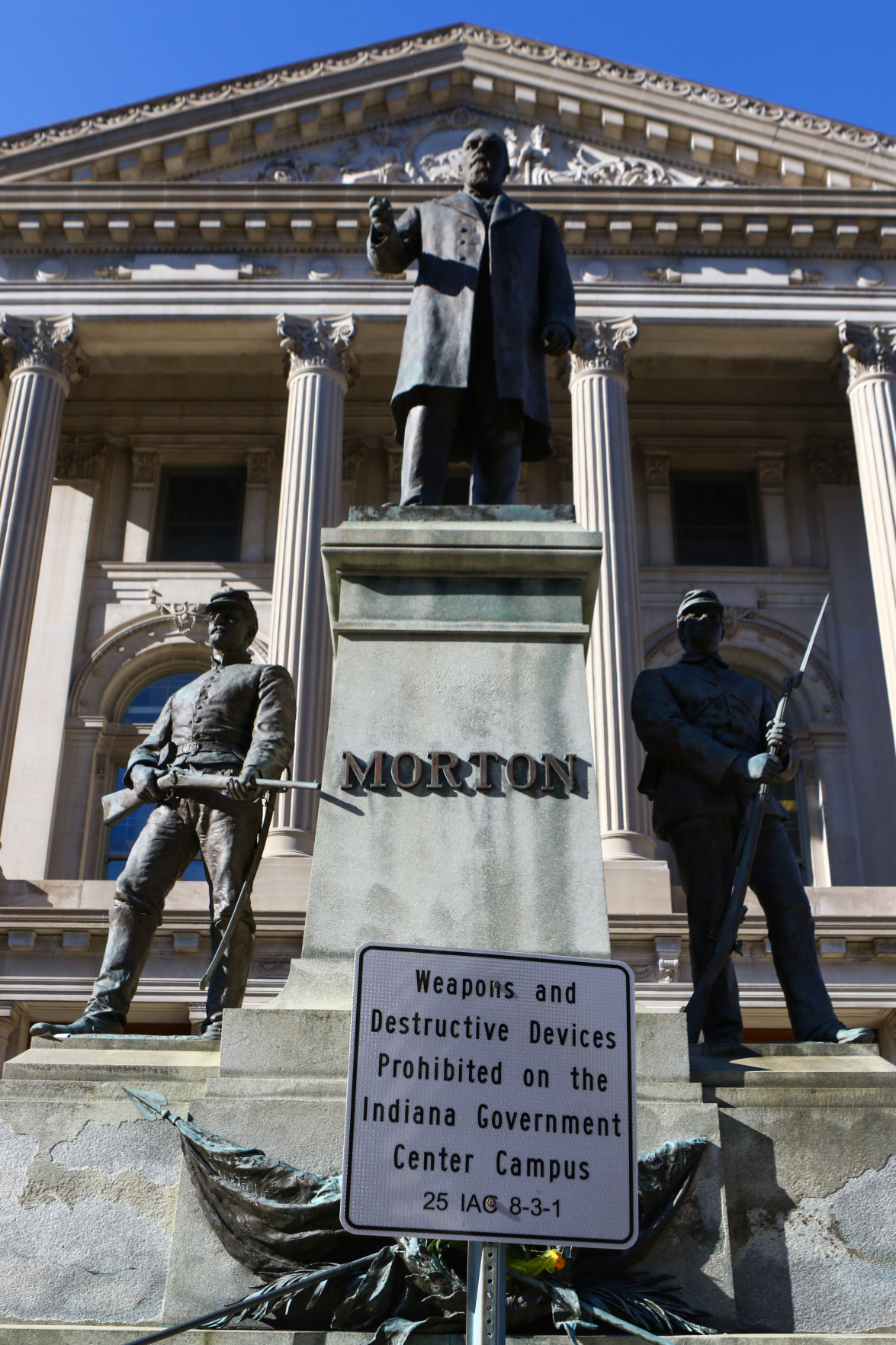 A sign was posted outside the eastern side of the Indiana Statehouse notifying visitors weapons are prohibited on the property. 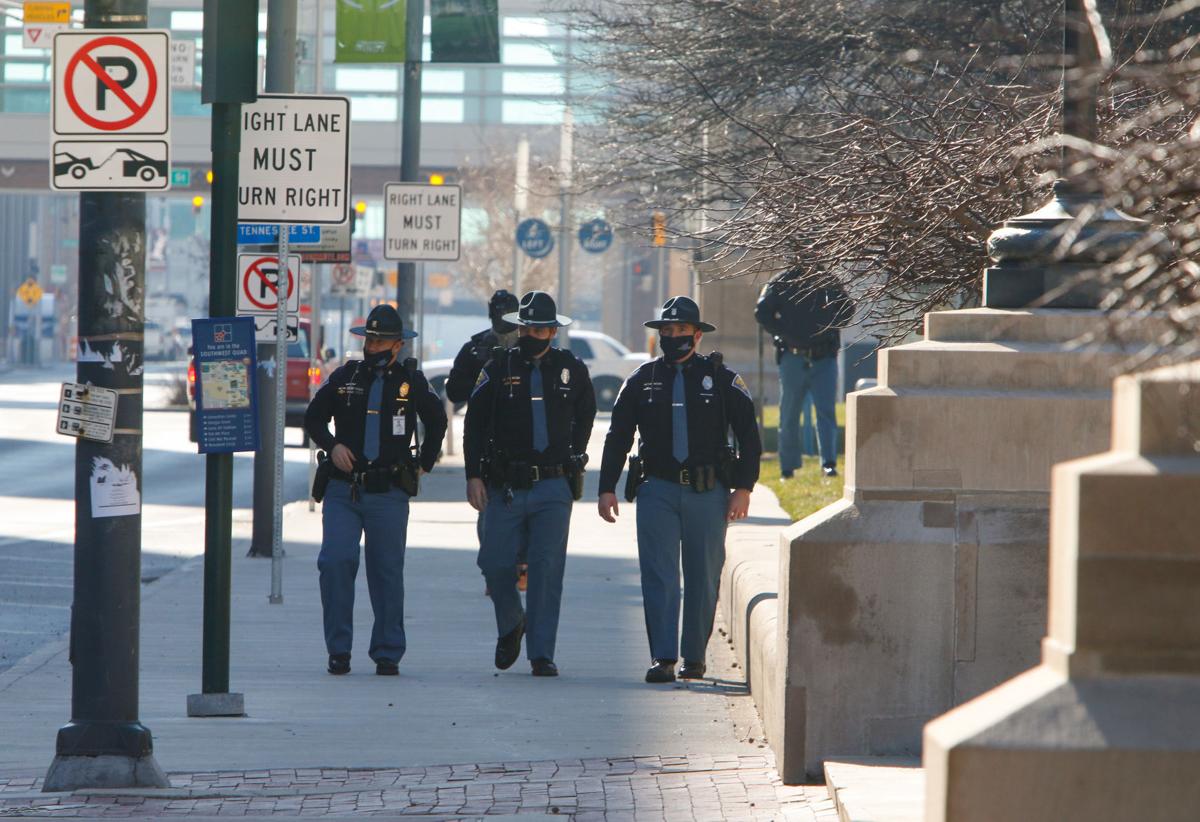 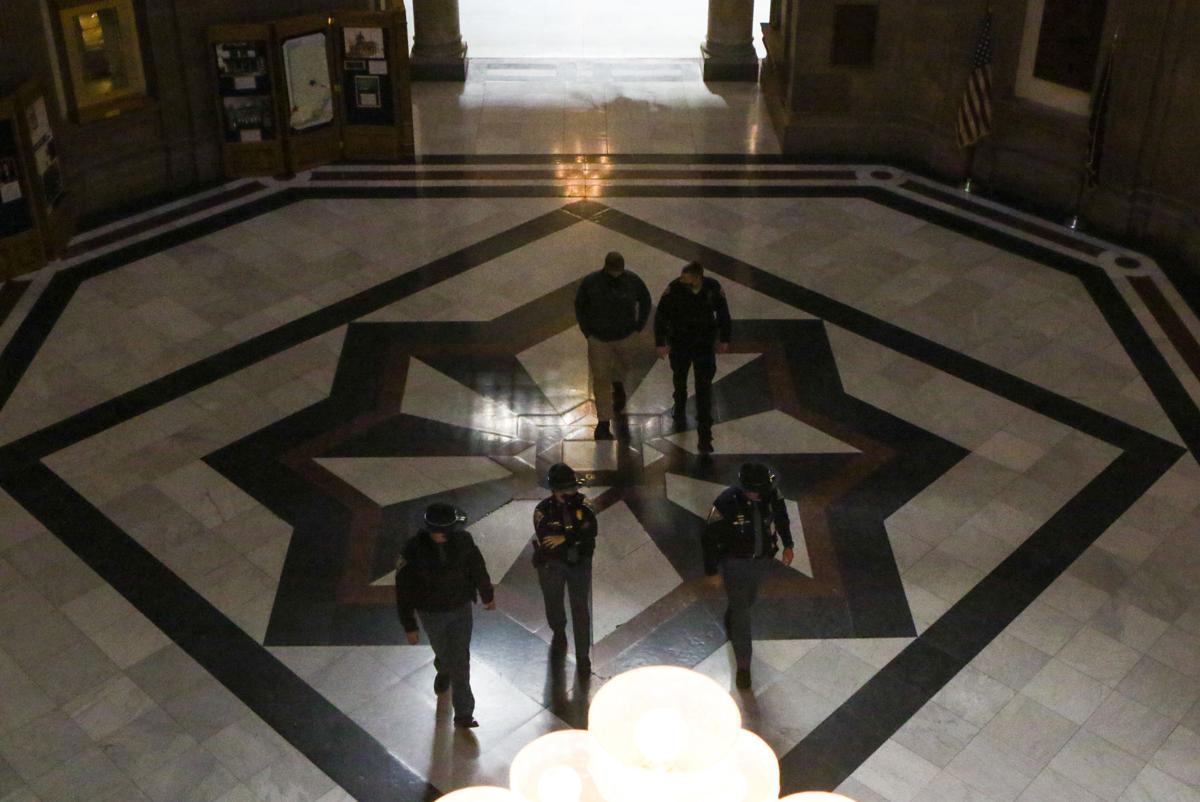 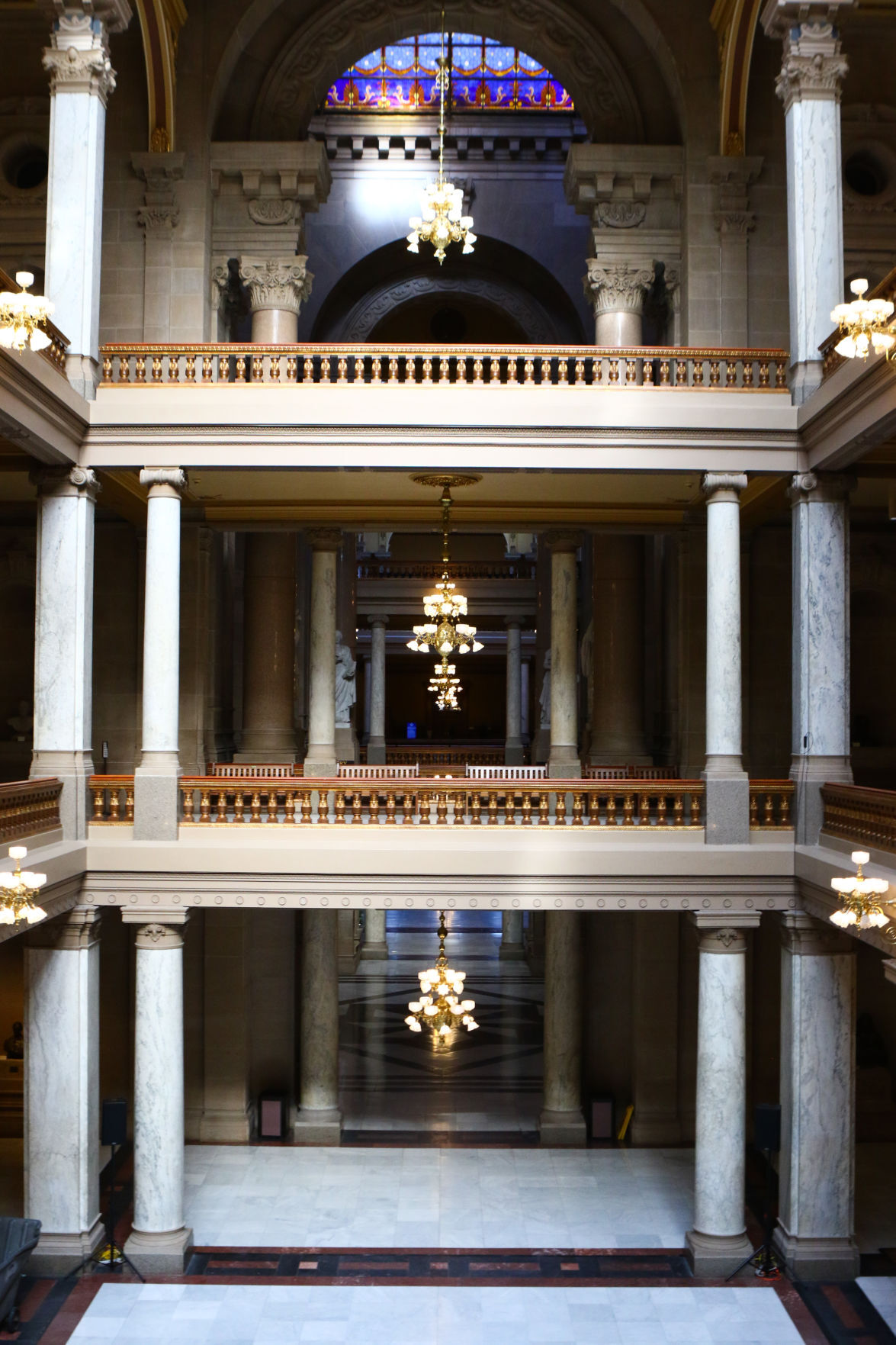 The Indiana Statehouse's multiple floors were empty save for Indiana State Police troopers and Indiana National Guard members on Wednesdsay.

INDIANAPOLIS — It remains to be seen whether Hoosier backers of Republican former President Donald Trump will embrace the call for unity issued by Democratic President Joe Biden during his inauguration ceremony on a U.S. Capitol platform that just two weeks ago was overrun by a Trump-incited mob determined to halt congressional certification of Biden's election.

One hopeful sign: No Trump supporters, opponents, or anyone else determined to make mischief or cause destruction showed up at the Indiana Statehouse in the hours before or after Biden's swearing-in Wednesday to protest the new federal administration.

Similar to Sunday, a large contingent of State Capitol Police, Indiana State Police and members of the Indiana National Guard were stationed inside the limestone Statehouse in downtown Indianapolis, just in case the FBI warning of armed Trump supporters swarming all 50 state capitols on Inauguration Day came to pass.

In the end, the police and guardsmen spent much of the day walking in groups around the state government complex, sitting together playing cards, and scrolling through websites on their cellphones.

Most state government employees worked from home as they have throughout the COVID-19 pandemic. However, the Indiana General Assembly cancelled its sessions this week in response to the perceived threat.

Senate President Rod Bray, R-Martinsville, said he has no regrets about doing so, even though the alleged danger to Hoosier lawmakers, legislative staff and the general public ultimately amounted to nothing.

"I understand why people may raise their eyebrows now that we haven't seen violence materialize today, but you have to take everything in context," Bray said. "Just two weeks ago we saw something horrific unfold in Washington, D.C. This decision was made with the benefit of that experience."

"So on one level you can be frustrated and say we should have come in today because everything was peaceful. On the other hand, I am very thankful it was peaceful and nothing happened today. You certainly don't wish for trouble just to prove you were right."

Bray insisted the threat of violent protest will not deter state lawmakers in the future from coming into the Statehouse and doing their jobs.

He said this time was different because of the recent insurrection at the U.S. Capitol and the strong recommendation by the Indiana State Police that Hoosier lawmakers stay out of Indianapolis this week.

"Protests are not foreign to the Statehouse, there have been tens of thousands of people in that building saying yes or no to an idea," Bray said. "That's when that building is at its liveliest and at its most productive, and it will be that way again. We aren’t going to shy away from those conversations."

He also pointed out this wasn't a week off for lawmakers or legislative staffers, who worked from home as they've had to do repeatedly due to COVID-19.

Bray is confident the General Assembly still will be able to complete the peoples' business and adjourn for the year, as scheduled, on April 29.

Not a single Trump supporter, opponent, or really anyone else showed up to protest, demonstrate or make a scene Sunday at the Indiana Statehouse.

The Indiana Statehouse will be closed to the public and the General Assembly will not meet next week due the high number of threats against governmental entities across the country.

"I support the article of impeachment so that we can move forward to do the work that our constituents sent us here to do," said U.S. Rep. Frank J. Mrvan, D-Highland.

Police say they're prepared to repel threats against Indiana Statehouse

"We are prepared to provide the necessary security for the Statehouse and its adjacent campus," said Captain Ron Galaviz of the Indiana State Police.

Mrvan will vote to impeach Trump for inciting attack on U.S. Capitol

"Only by sending the unequivocal message that any insurrectionist act will not be tolerated in our nation will we be able to begin the healing process," said U.S. Rep. Frank J. Mrvan, D-Highland.

U.S. Sen. Mike Braun, R-Ind., abandoned his Republican allies Wednesday and voted to accept the presidential election results from the challenged states of Arizona and Pennsylvania.

"This is a divided nation that must come together, and this is a moment that will stick with me to really emphasize that: leadership and words matter," said U.S. Rep. Frank J. Mrvan, D-Highland.

Braun said persistent allegations of voter fraud in several states, and the strong belief among some Republicans "the election was rigged," justifies an extraordinary emergency investigation.

A Wisconsin woman was arrested at a LaPorte County gas station Friday after Indiana State Police officers detected the odor of burnt marijuana coming from her vehicle.

Michigan City Police are continuing to investigate a Saturday night shooting that killed a 27-year-old man and injured a 31-year-old woman.

During their deployment, the Indiana Guardsmen helped with crowd and traffic control at the National Mall and near the White House.

A new organization — INProgress — is recruiting candidates to run in state legislative races across Indiana, with an eye toward toppling the Republican supermajority in the General Assembly.

"As a black man in Indiana, seeing this proposal pass with overwhelming, unanimous support gives me hope for our future," said state Sen. Eddie Melton, D-Gary.

Indiana State Police troopers keep watch outside the eastern side of the Indiana Statehouse on Wednesday in Indianapolis.

Indiana State Police troopers monitor the eastern side of the Indiana Statehouse on Wednesday in Indianapolis.

A sign was posted outside the eastern side of the Indiana Statehouse notifying visitors weapons are prohibited on the property.

The Indiana Statehouse's multiple floors were empty save for Indiana State Police troopers and Indiana National Guard members on Wednesdsay.