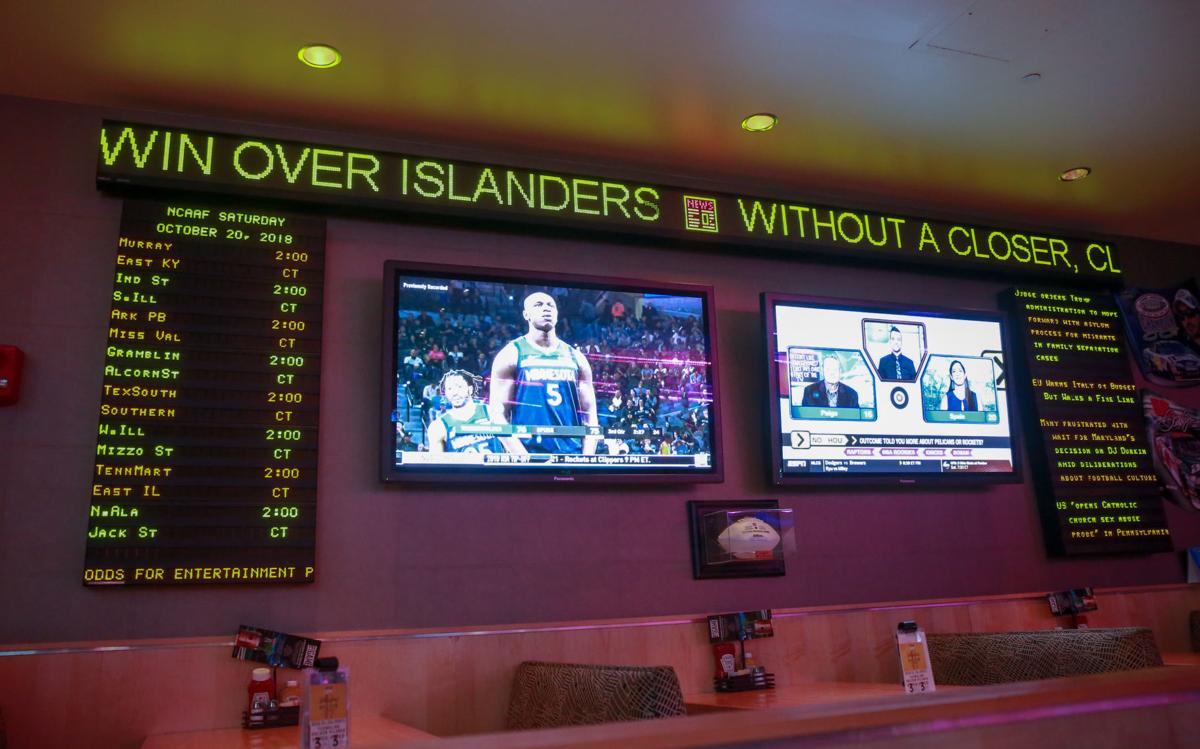 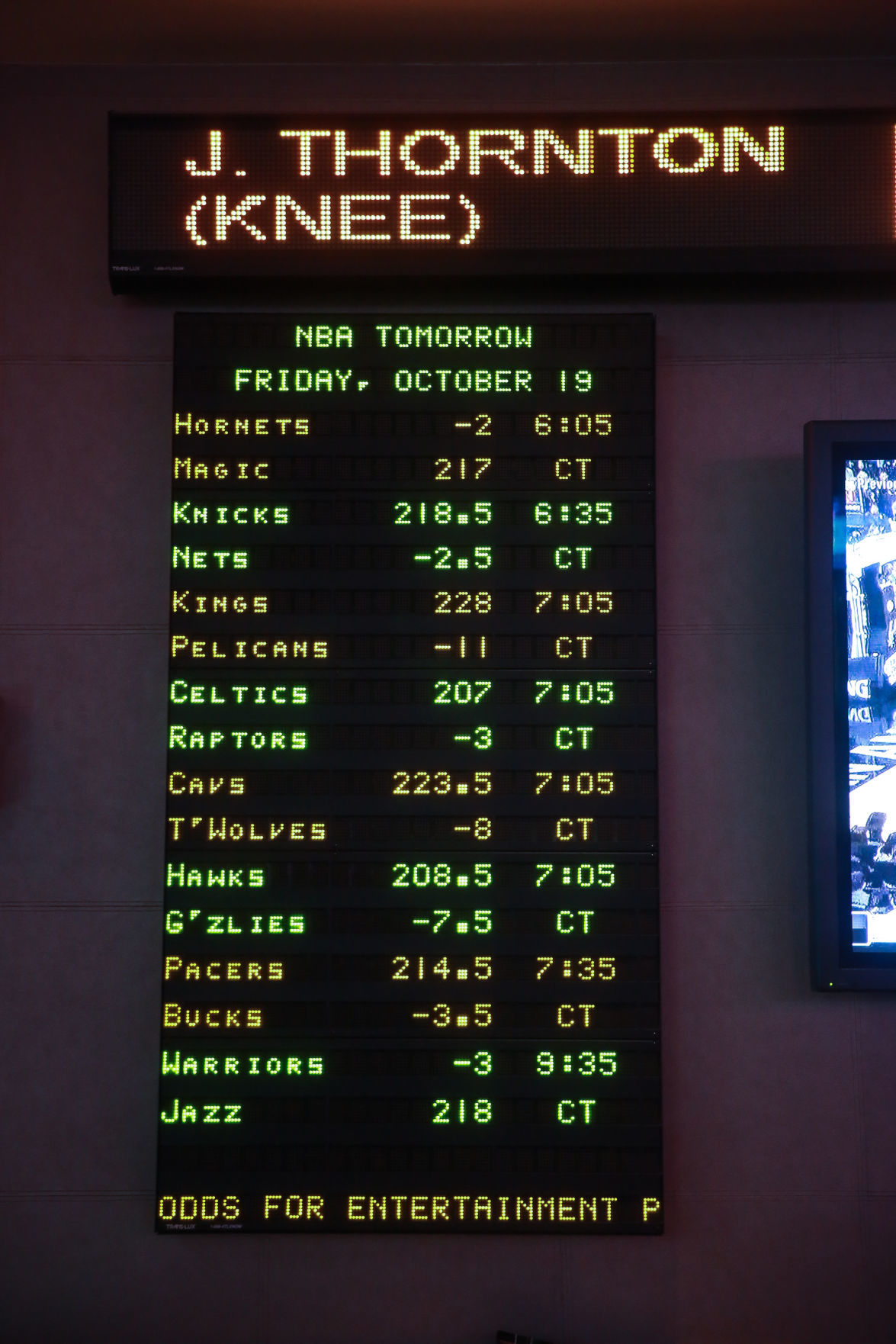 Tickers at Michigan City's Blue Chip Casino's The Game sports bar give sports odds but for entertainment purposes only. 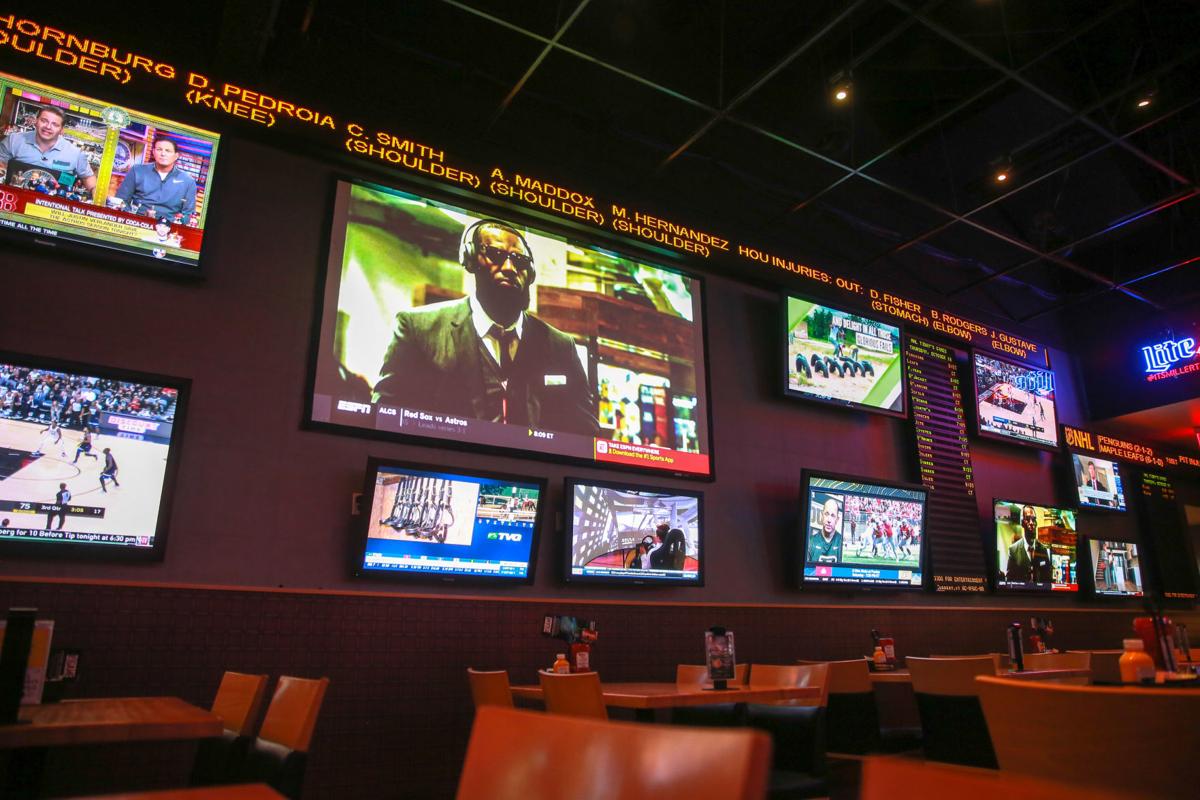 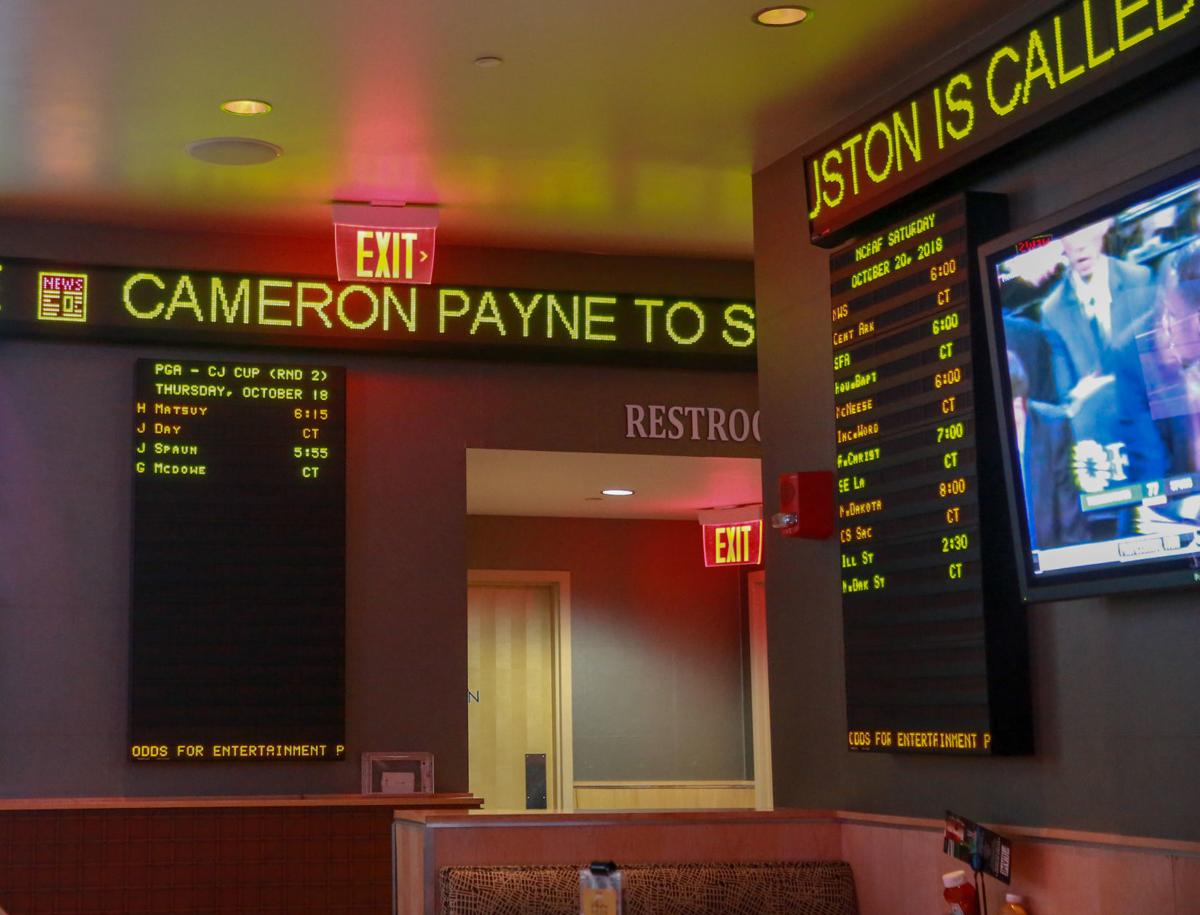 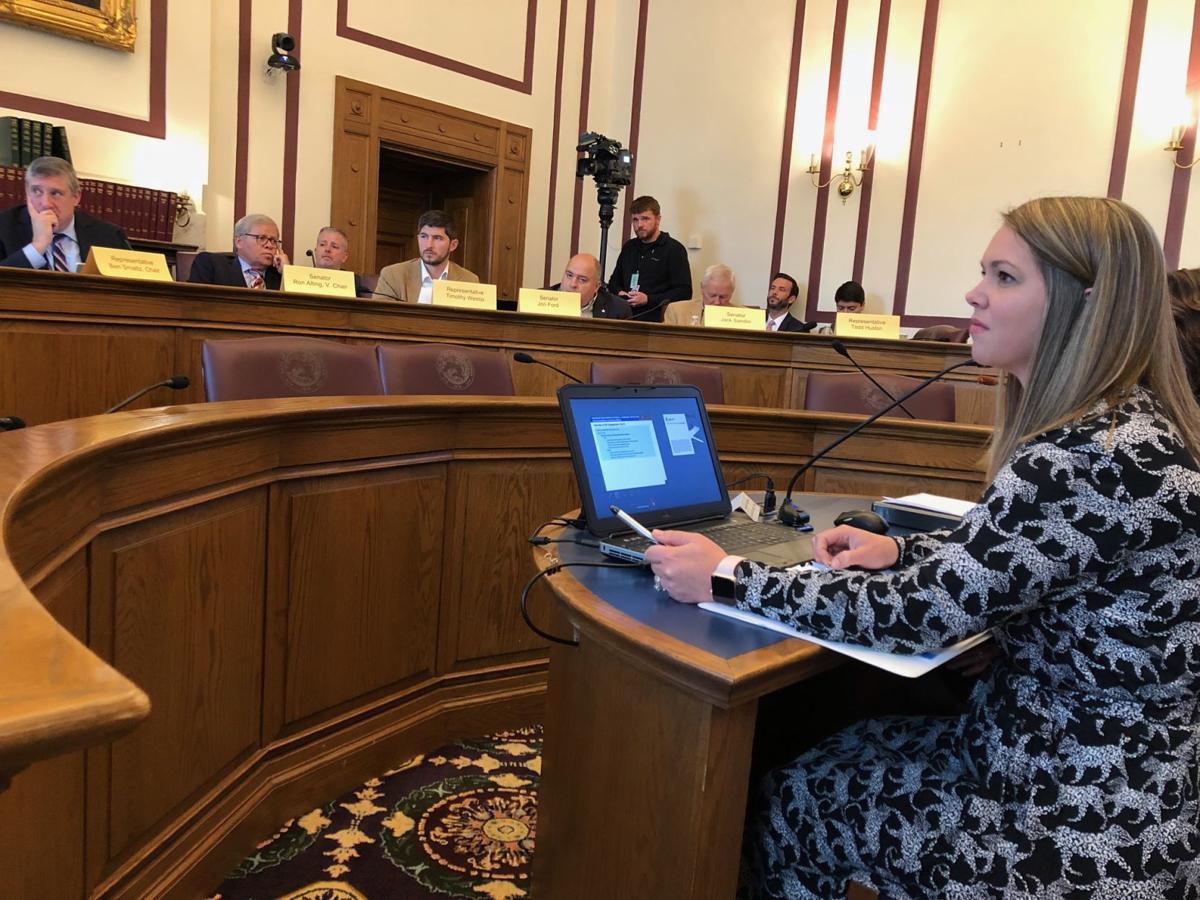 Sara Tait, executive director of the Indiana Gaming Commission, seated right, speaks Friday about the potential for legalized sports betting in the state to the General Assembly's Interim Study Committee on Public Policy.

INDIANAPOLIS — Sports betting could be coming next year to Indiana, and placing a wager might be as convenient as reaching for your mobile phone.

A legislative study committee unanimously recommended last week that the 2019 General Assembly consider having Indiana join the six states where betting on the outcomes of professional and college sporting events already is permitted.

Nevada has had sports betting since gambling was legalized there in 1931. Five other states — Delaware, New Jersey, West Virginia, Mississippi and New Mexico — have come on board since the U.S. Supreme Court in May struck down a federal sports-wagering ban.

Hoosier lawmakers indicated that the state's 13 casinos — including Northwest Indiana's five — likely would be the primary outlets for sports wagering; off-track betting facilities owned by the two central Indiana horse track casinos also might be allowed to accept sports bets.

At the same time, most members of the General Assembly's Interim Study Committee on Public Policy appeared to favor allowing sports bets to be placed at casinos from home, or anywhere in the state, using a secure mobile phone application.

Hoosiers already can bet on horse races using mobile devices or over the internet, and can gamble on their phones within the walls of the state's casinos.

Kevin Mullally, vice president of government relations at the industry testing company Gaming Laboratories International, said mobile sports wagering is a logical extension that most states coming into the market following the Supreme Court ruling are likely to embrace.

"Giving the customer a lot of choices is what we would expect to see," Mullally said.

But he suggested that if the state is concerned about potential underage betting, it could require mobile sports wagering accounts only be opened in-person at a casino with photo identification and a linked credit card or bank account.

"From a regulatory perspective, mobile wagering actually offers regulators many more tools to know the customer, to follow the money and to have data on a very transactional level," Mullally said.

The Indiana Gaming Commission, which regulates the industry in the Hoosier State, is preparing to add sports wagering to its portfolio should the General Assembly decide to legalize it.

IGC Executive Director Sara Tait told the committee that sports betting "is something that has been successfully regulated (elsewhere) for years, so we're not going to have to reinvent the wheel."

In fact, the commission already has procured an analysis of what sports betting might mean for Indiana's bottom line that it presented Friday to the legislative committee.

The study by Eilers and Krejcik Gaming found that, within five years, in-person and mobile sports bets in Indiana are likely to total $256 million a year, which translates to 2,281 direct and indirect new jobs and $38 million in annual new state tax revenue.

While that's only about 9 percent of the state's current annual tax receipts from casino wagers, the study determined that sports betting — particularly on mobile devices — could grow Indiana's overall gaming market, since individuals wagering on sports tend to be younger and more affluent than the average casino patron.

It simultaneously could help to eliminate sports bets placed with bookies and through other illegal gambling operations located across the state, according to the study.

"The major takeaway from this report is that the market here is not predetermined," said Jenny Reske, IGC deputy director.

"The size will be determined by public policy decisions that are made regarding many issues, including distribution channels, taxation, the macropolitical environment and the regulatory environment."

In the meantime, Alting urged his legislative colleagues to continue seeking information from other states, gaming experts and sports leagues so together they can craft a superior plan for Indiana sports betting before the General Assembly adjourns for the year in April.

"You definitely need to dot your I's and cross your T's on this," Alting said. "We don't want to write 'a' bill, we want to write the best bill."

State Rep. Ben Smaltz, R-Auburn, chairman of the House Public Policy Committee, rejected the notion that sports betting is an expansion of gaming, which some conservative legislators in the GOP-controlled Legislature automatically oppose on principle.

Rather, Smaltz said he sees adding sports bets to the mix at Indiana's casinos as no different than putting in a new slot machine.

"My concern is that we need details and data, the regulations, the funding — how is all that going to work?" Smaltz asked.

State Rep. Jim Lucas, R-Seymour, whose freedom agenda includes guns, gambling and legal marijuana, said Indiana isn't the first state to move in this direction, and the six states that already have sports betting have found ways to make it work for them.

"I think if Indiana has enough intelligent people working toward this, then we can put something together that works for Hoosiers," Lucas said.

"From a regulatory perspective, mobile wagering actually offers regulators many more tools to know the customer, to follow the money and to have data on a very transactional level." — Kevin Mullally, vice president of government relations at the industry testing company Gaming Laboratories International

INDIANAPOLIS — Hoosier lawmakers are likely to get an earful next year from the state's casinos, professional sports leagues and prospective b…

INDIANAPOLIS — The Indiana Statehouse was abuzz with activity Tuesday as the 121st General Assembly convened for Organization Day.

Dice begin rolling at the Statehouse on potential move of one Gary casino license; Hammond, Portage may be out

INDIANAPOLIS — A sprawling proposal to reshape Indiana's gaming industry for the next decade, including moving one of the Majestic Star casino…

Tickers at Michigan City's Blue Chip Casino's The Game sports bar give sports odds but for entertainment purposes only.

Sara Tait, executive director of the Indiana Gaming Commission, seated right, speaks Friday about the potential for legalized sports betting in the state to the General Assembly's Interim Study Committee on Public Policy.