Very windy Tuesday in the Region; chance of storms Tuesday evening with a cold front 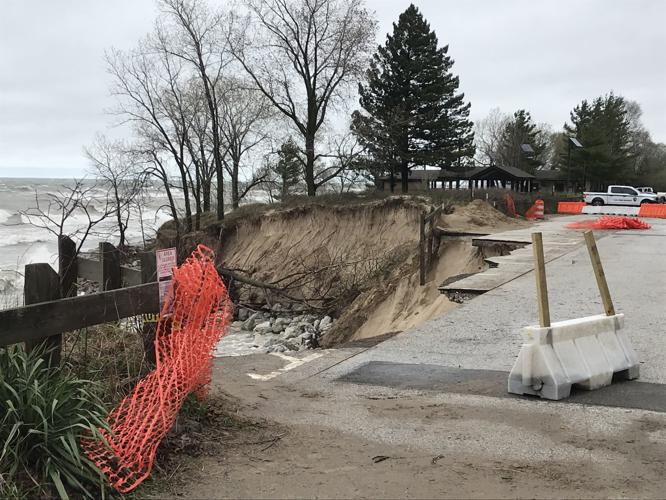 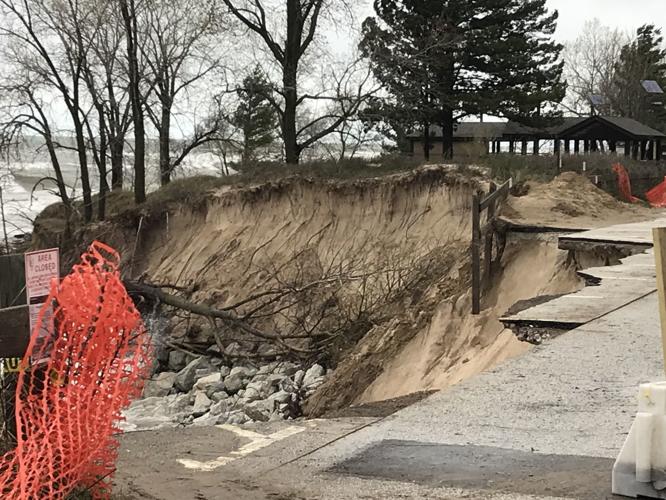 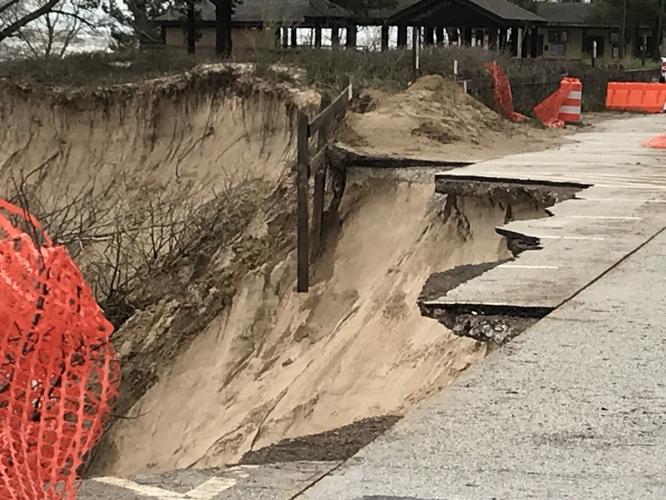 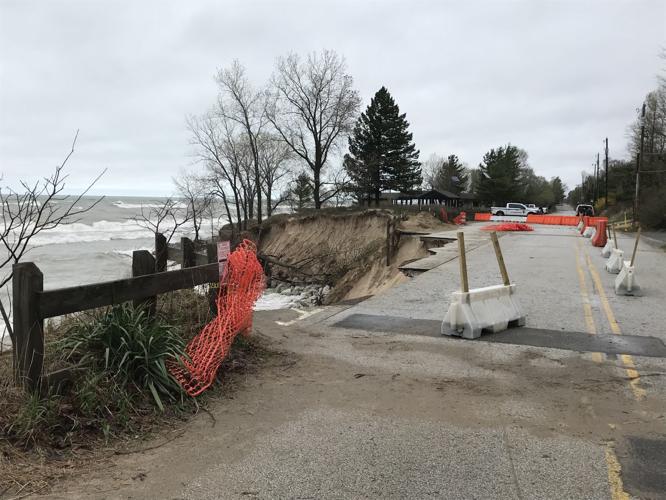 BEVERLY SHORES — A section of pavement along the town's Lake Front Drive was washed away overnight by brutal waves, which now threaten at least two separate sections of the lakefront road, gas and water lines, and nearby homes.

Rangers with the Indiana Dunes National Park stood guard Thursday morning at a sharp cliff overlooking Lake Michigan that was once parking for the Lakeview Beach site.

The washed out area is immediately west of the Lakeview Beach pavilion area, which remains opens.

The erosion was working its way south under Lake Front Drive. In its path along the south side of the two-lane roadway is a NIPSCO gas line, town water line and two homes, one of which has now had its access cut off by the damaged and closed roadway, he said.

A section of roadway west of that location has been closed for the past month, Benson said.

The combination of high lake levels and strong waves also forced the closure Thursday morning of another section of Lake Front Drive to the east, six blocks beyond the intersection with Broadway, Benson said.

Bruce Rowe, supervisory park ranger for the IDNP, said Thursday morning rangers were still assessing the damage caused by the overnight storm, but acknowledged a "significant piece of pavement was lost."

"I do want to mention that erosion from spring storms is normal, although intensified due to the current high lake levels, but that beaches always build back up during the summer," he said. "The extent of that buildup will vary greatly dependent upon the lake's height."

The town, in the meantime, is attempting to borrow $5 million to further protect its shoreline and combat the worsening problem of erosion, Benson said.

The town also continues to call on the state to declare an emergency in the area so federal funding can be freed up, he said.

Indiana Gov. Eric Holcomb issued an executive order in late February directing state agencies to take steps to mitigate the significant erosion of the Lake Michigan shoreline in Northwest Indiana, but the Republican stopped short of declaring it a state disaster area.

The order directs the Indiana Department of Natural Resources to continue expediting emergency repairs sought by shoreline property owners and requires the Department of Homeland Security to seek federal grants for short- and long-term mitigation projects.

It also authorizes the Homeland Security director to coordinate the local public safety response when necessary and appropriate, and to quantify damages to the affected areas for inclusion in a possible future disaster declaration that potentially could unlock federal aid to the Region.

Benson said Thursday the town has been in touch with state and federal officials about the developments overnight.

David Hosick, director of public affairs for the Indiana Department of Homeland Security, said his agency immediately sent a member of its mitigation team to assess the situation after being informed Thursday.

"The agency will continue to closely monitor the erosion, as it has done across the past several months, and provide any assistance it can to the Department of Natural Resources, the lead agency on all waterway and erosion issues," he said.

Hosick said a state emergency declaration would be no guarantee of federal funding.

Americans are feeling isolated and anxious. They fear they or their loved ones will get sick. They worry about their jobs.

A lakeshore flood warning remained in effect until 10 p.m. for part of Lake County and Porter County and until 7 p.m. in LaPorte County, the National Weather Service said.

A male driver and a female passenger are dead after veering left of center along Ind. 130 and into the path of an oncoming semi-trailer truck on Thursday, police said.

Hoosiers should find out Friday which industries, retailers and other businesses will be allowed to reopen — and under what conditions.

A third young person has died as a result of Thursday's head-on collision on Ind. 130 and all three people have been identified.

This time, Pence wears mask as he tours Indiana plant

Vice President Mike Pence donned a face covering Thursday as he toured a production facility after coming under fire for failing to wear one earlier this week in violation of Mayo Clinic policy.

As America tentatively emerges from weeks of lockdowns, it is becoming clear that the pandemic has taken its toll on workers who have been on the front lines all along.

High waves Friday exacerbated erosion along Indiana's Lake Michigan shore, where towns already are dealing with the loss of infrastructure because of record high lake levels.

Rainfall is predicted upwards of 100 percent Sunday night across the Region and continuing at 40 percent into Monday before dwindling to drier conditions as the week goes on, according to the weather service.

NIRPC continues effort to get disaster declaration for lakeshore

The effort follows NIRPC's passage of a resolution earlier this year urging Gov. Eric Holcomb to declare a public emergency.

Officials from the Indiana Dunes National Park said most parking lots were filled by 12:30 p.m. on Sunday, and Gary officials reported large crowds at the city's beaches.

If funding can be secured to renovate the former Good Fellow Camp in Porter, it would double the size of the site that is now used as Dunes Learning Center, Indiana Dunes National Park Superintendent Paul Labovitz said.

Since late August, the U.S. Army Corps of Engineers has been dredging sand to ease navigation at the Port of Indiana-Burns Harbor.