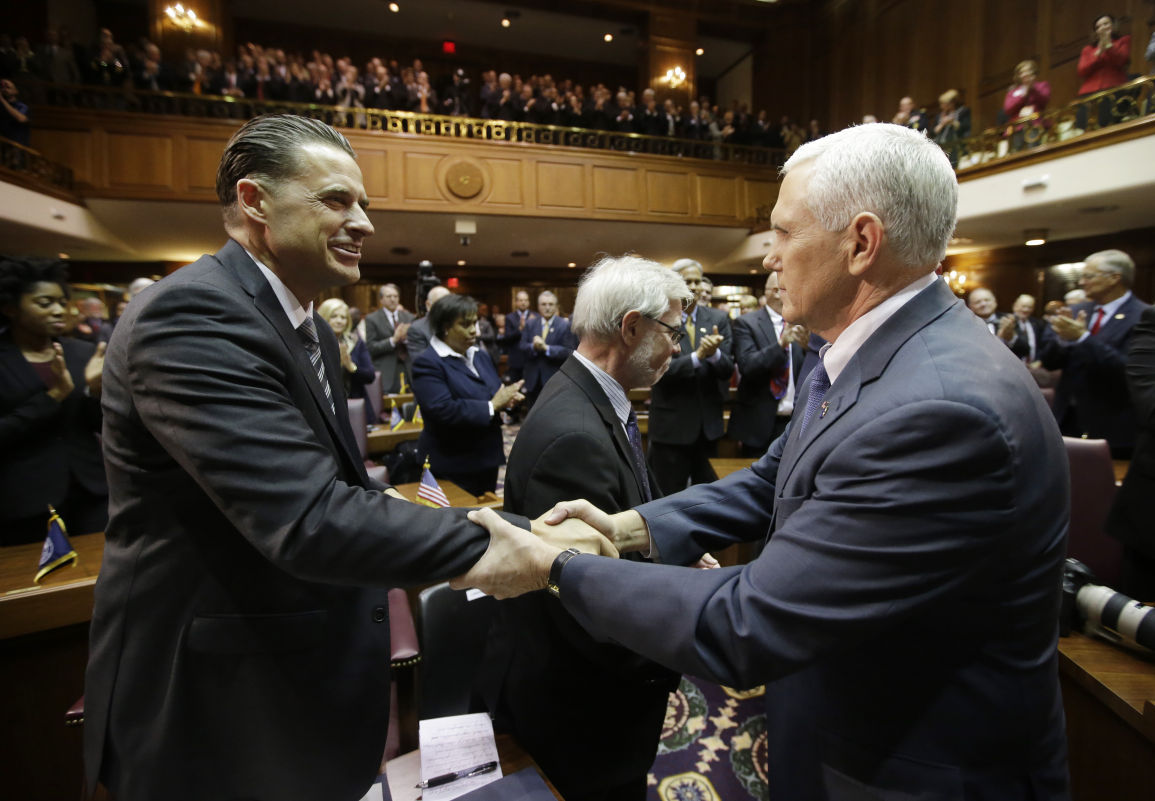 Indiana Gov. Mike Pence, right, shakes hands Tuesday with Minority leader Rep. Scott Pelath, D-Michigan City, after Pence delivered his State of the State address to a joint session of the Legislature at the Statehouse in Indianapolis. 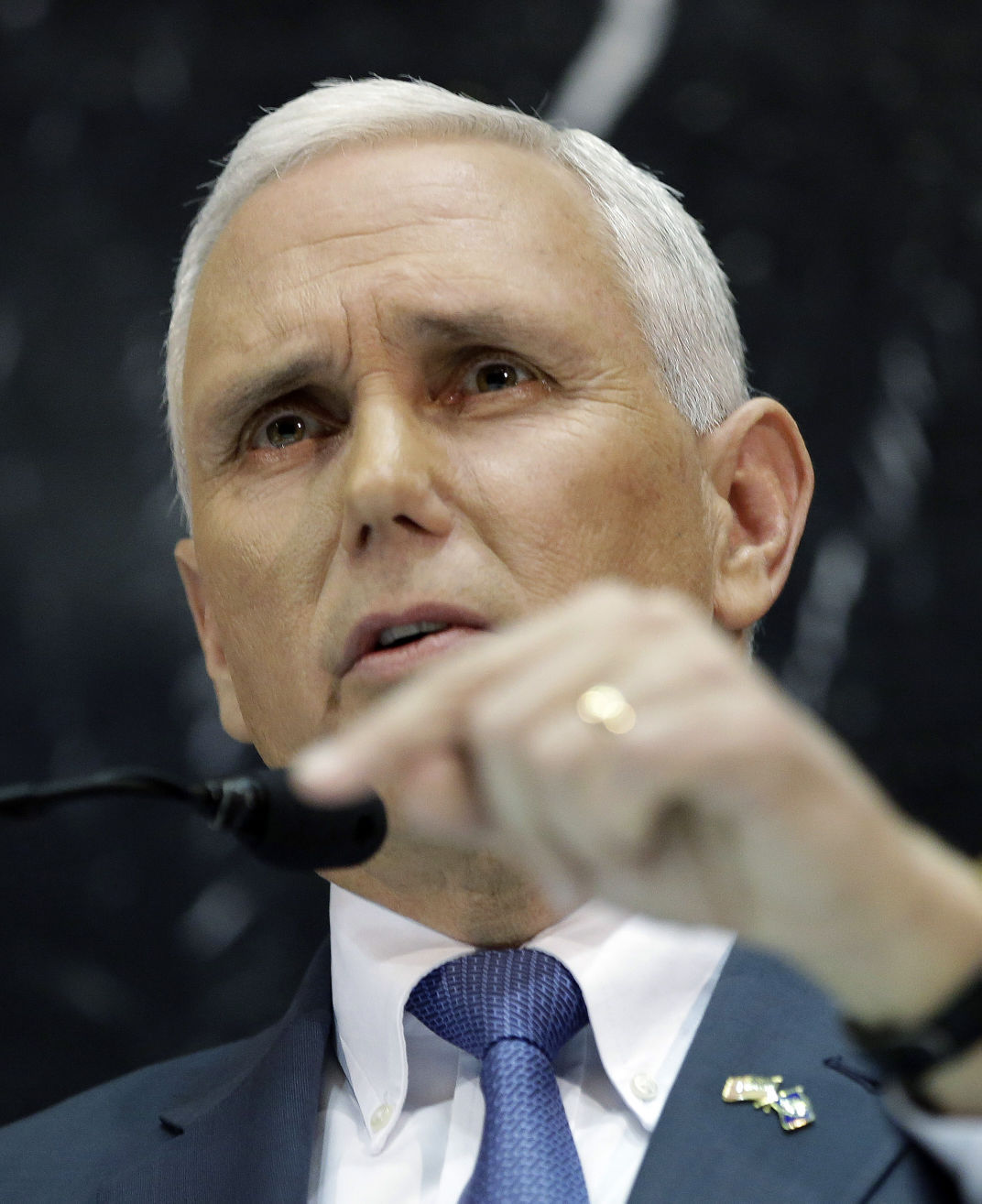 Indiana Gov. Mike Pence delivers his State of the State address Tuesday to a joint session of the Legislature at the Statehouse.

However, on the one issue that last year threatened to derail Indiana's economy and reputation, the Republican punted to the General Assembly, charging lawmakers with finding an appropriate balance between civil rights protections for lesbian, gay, bisexual and transgender Hoosiers and religious freedom claims.

The governor tried to carefully thread a course between the two sides by insisting Hoosiers do not tolerate discrimination of any kind, while Hoosiers also cherish the religious liberties enshrined in Indiana's Constitution.

Pence said he's not certain whether it is possible, or even necessary, to reconcile those two values, and did not endorse any of the nearly one dozen legislative proposals seeking to do so.

Instead, he signaled that any anti-discrimination legislation lacking significant exceptions for individuals or organizations that might possibly be classified as religious would be met by his veto pen.

"I will not support any bill that diminishes the religious freedom of Hoosiers or interferes with the constitutional rights of our citizens to live out their beliefs in worship, service or work," Pence said.

In all, Pence spoke for less than four minutes on an issue that he claims to have been "studying" since April, when a hastily adopted fix to the 2015 Religious Freedom Restoration Act controversy put an end to threatened Indiana business and tourism boycotts from across the country.

State Rep. Linda Lawson, D-Hammond, said following the speech she can't believe Pence waited months to essentially say nothing on an issue that has roiled the General Assembly and made Indiana a national laughingstock.

"I'm disappointed. I'm really disappointed," Lawson said. "I believe in my heart that's he's absolutely wrong. It has nothing to do with religion. It's a discrimination issue."

Most of the governor's 28-minute speech centered on his accomplishments during his first three years in office, implicitly making the case for re-election before a statewide radio and television audience.

Pence touted the 4 percent drop in the state's unemployment rate since January 2013, claimed credit for 135,000 new private-sector jobs created on his watch and declared more Hoosiers are working today than at any point in the 200 years Indiana has been a state.

He urged the Republican-controlled Legislature to keep Indiana moving forward by enacting his $1.4 billion plan to spend a portion of the state's budget reserve, increase future appropriations and borrow $240 million for state and local road and bridge improvements over the next four years.

At the same time, he dismissed the House Republican roads plan that proposes to increase cigarette and gasoline taxes to ensure a steady stream of infrastructure funding for years to come.

"When you've got money in the bank and you've got the best credit rating in America, the last place you should look to pay for roads and bridges is the wallets and the pocketbooks of hard-working Hoosiers," Pence said.

"Let's invest in our roads, let's maintain the Crossroads of America and let's do it without raising taxes."

State Rep. Ed Soliday, R-Valparaiso, the sponsor of House Bill 1001, said he's not sure Pence's math adds up to long-term infrastructure improvements, and he can't believe a Republican governor is calling for borrowing money to pay for road repairs.

"We weren't very happy when the Democrats borrowed money in 1998 and we're paying $100 million a year until 2029 on that debt," Soliday said.

The governor also confirmed his change of heart on school testing, calling for Indiana to "take a step back from ISTEP and see how we can improve on the test that we use to measure our kids and our schools every year."

In addition, Pence endorsed tougher penalties on drug dealers "who sell poisons to our kids," and warned any who were watching his speech that "we are coming after you."

The governor's biggest applause from members of the Republican-controlled Legislature came when he took aim at President Barack Obama's recent claim that Indiana-sold guns are partially responsible for Chicago homicides.

"Indiana will always stand by the right to keep and bear arms," Pence said. "So Mr. President please stop blaming our gun laws for violence in Chicago. Hoosiers are not the cause of crime in your hometown, criminals are."

The State of the State address typically draws elected leaders from across Indiana to the audience in the House gallery.

Gov't report: Budget deficit to rise to $544B this year

WASHINGTON — A government report released Tuesday estimates that this year's budget deficit will rise to $544 billion, an increase over prior …

'Super RFRA' fails to advance out of Senate committee

"We hold these truths to be self-evident, that all men are created equal, that they are endowed by their Creator with certain unalienable Righ…

INDIANAPOLIS — Gov. Mike Pence did not seem entirely disappointed Wednesday that he won't have to decide whether to sign or veto legislation p…

INDIANAPOLIS — Gov. Mike Pence has selected a Gary native to lead the state agency charged with investigating claims of discrimination in empl…

"Momma" wasn't going to let them get away with it.

Holcomb to deliver State of the State address Tuesday

INDIANAPOLIS — Gov. Eric Holcomb will deliver his first State of the State address Tuesday night at the Statehouse to a joint session of the I…

Lawmakers not expecting much from Pence State of the State address

INDIANAPOLIS — Gov. Mike Pence is not saying whether he supports or opposes civil rights protections for lesbian, gay, bisexual and transgende…

INDIANAPOLIS | Gov. Mike Pence is asking Indiana lawmakers to increase punishment for some drug crimes, less than two years after the Republic…

Indiana Gov. Mike Pence, right, shakes hands Tuesday with Minority leader Rep. Scott Pelath, D-Michigan City, after Pence delivered his State of the State address to a joint session of the Legislature at the Statehouse in Indianapolis.

Indiana Gov. Mike Pence delivers his State of the State address Tuesday to a joint session of the Legislature at the Statehouse.