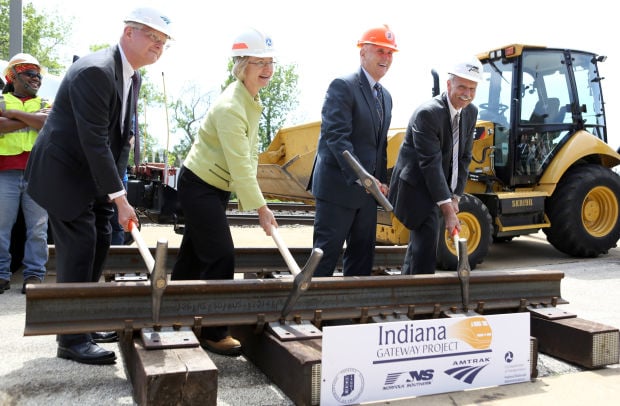 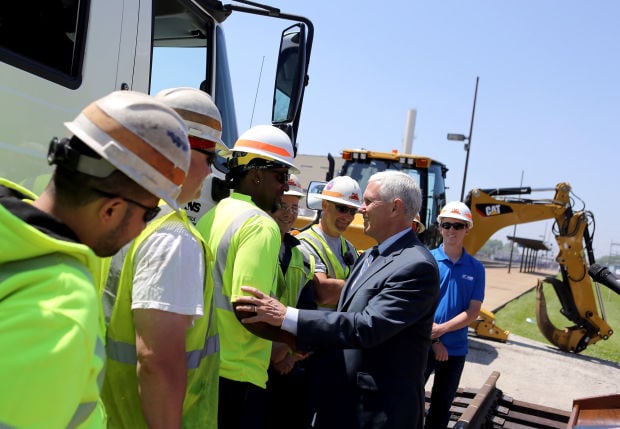 Indiana Gov. Mike Pence greets Norfolk Southern Railway employees at a news conference announcing the start of the Indiana Gateway construction project at the Hammond-Whiting Amtrak station in Hammond. The $71.4 million project will speed passenger and freight rail into and out of Chicago. 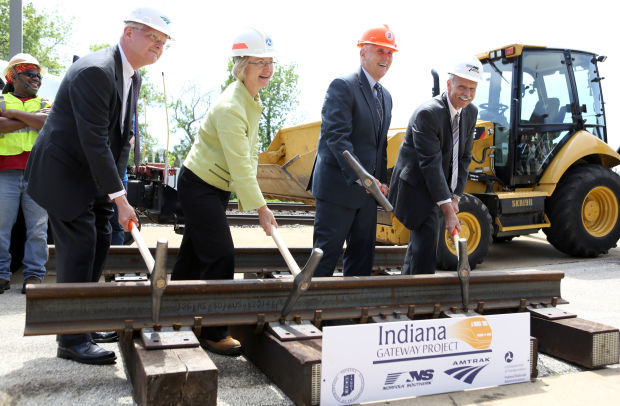 A slew of job creation announcements have been made in the region in the last few months. On May 29, Gov. Mike Pence was in LaPorte to announce Alcoa would build a $100 million factory employing 329 to make advanced jet engine parts. A couple hours later the governor, shown here second from right, was in Hammond to kick off the Indiana Gateway rail project, which will create about 700 construction jobs.

INDIANAPOLIS | When it comes to federal spending for Indiana projects, Gov. Mike Pence is discovering the view from his Statehouse desk is a lot different from his old stomping ground in the U.S. House.

Consider the governor's visit to Hammond on Thursday: Pence cheered the start of the Indiana Gateway rail improvements that will help speed freight and passenger rail travel through Northwest Indiana.

"I say let's blow the horn, let's get the Gateway open and be on the way to a more prosperous Indiana," Pence proclaimed at the Hammond-Whiting Amtrak station.

The $71.4 million project will cut delays at region rail crossings by 70 hours a year, shave an hour off Amtrak trips between Chicago and Detroit, and create an estimated 700 jobs, according to Pence's Indiana Department of Transportation.

But the money for the project isn't coming from INDOT.

The Indiana Gateway is being paid for by the federal government through the 2009 American Recovery and Reinvestment Act, more commonly known as the stimulus.

As a congressman, Pence had a lot to say about the stimulus when it was being debated by the U.S. House. As chairman of the House Republican Conference, he led opposition to the stimulus in the chamber and condemned it repeatedly in national television appearances.

"Republicans oppose this bill because this backroom deal is simply a long wish list of big government spending that won't work to put Americans back to work. It won't create jobs. The only thing it will stimulate is more government and more debt. It will probably do more harm than good," Pence said.

Pence argued the stimulus should be reworked to include more tax cuts, even though the $288 billion in tax cuts were the largest component of the $787 billion plan, followed by $144 billion in aid to states and $111 billion for infrastructure.

Asked Friday about his seeming change of heart toward the stimulus now that he is governor, Pence repeated his opposition to stimulus spending.

"Back in early 2009, I just didn't think we could borrow and spend and bail our way back to a growing economy, and I still believe that to be the case," he said.

But he added that if the money is out there, a governor must make sure the state get its share -- especially if it will be spent on infrastructure projects like the Indiana Gateway, which Pence called "a sound, sound use of public dollars.

"I do support the state of Indiana's efforts, over the last administration and this administration, to marshal those dollars and put them to work in ways that I think are going to help Northwest Indiana's economy grow and really maintain our posture as the Crossroads of America," Pence said.

Pence also noted he is not the first Hoosier governor to blast stimulus spending on one hand, and grab for stimulus cash with the other.

Former Gov. Mitch Daniels also condemned the stimulus. But the Republican had no qualms about taking some $1 billion in stimulus money that was intended to provide "extra" funds for Indiana schools, and instead using it to replace a regular state payment to school corporations.

That stimulus switcheroo enabled Indiana to maintain its budget reserve though the Great Recession and is the foundation of the $2 billion state bank account that Pence regularly touts as evidence of his sound fiscal management.

Indiana is pausing administration of the Johnson and Johnson COVID-19 vaccine at immunization sites across the state, in accordance with a directive from federal health agencies.

Senate Enrolled Act 389 would permit Indiana property owners to drain or fill most isolated wetlands without a permit or compensatory mitigation.

Lake County renters struggling to pay their landlord or utility bills due to COVID-19 can now apply for up to 12 months of financial assistance to cover those costs.

During a recent meeting, the St. John Plan commission approved a new 102-lot subdivision, set to be located along Calumet Avenue.

The City Council has given its blessing to two new recreational businesses coming to the community. One deals with yoga, while the other will offer simulated golf.

Indiana and Illinois have shifted their income tax filing and payment deadline to May 17, instead of Thursday, to align with the federal government.

Supporters say the project talked about for more than 50 years can’t wait much longer because of traffic congestion on Ind. 2.

Indiana Gov. Mike Pence greets Norfolk Southern Railway employees at a news conference announcing the start of the Indiana Gateway construction project at the Hammond-Whiting Amtrak station in Hammond. The $71.4 million project will speed passenger and freight rail into and out of Chicago.

A slew of job creation announcements have been made in the region in the last few months. On May 29, Gov. Mike Pence was in LaPorte to announce Alcoa would build a $100 million factory employing 329 to make advanced jet engine parts. A couple hours later the governor, shown here second from right, was in Hammond to kick off the Indiana Gateway rail project, which will create about 700 construction jobs.