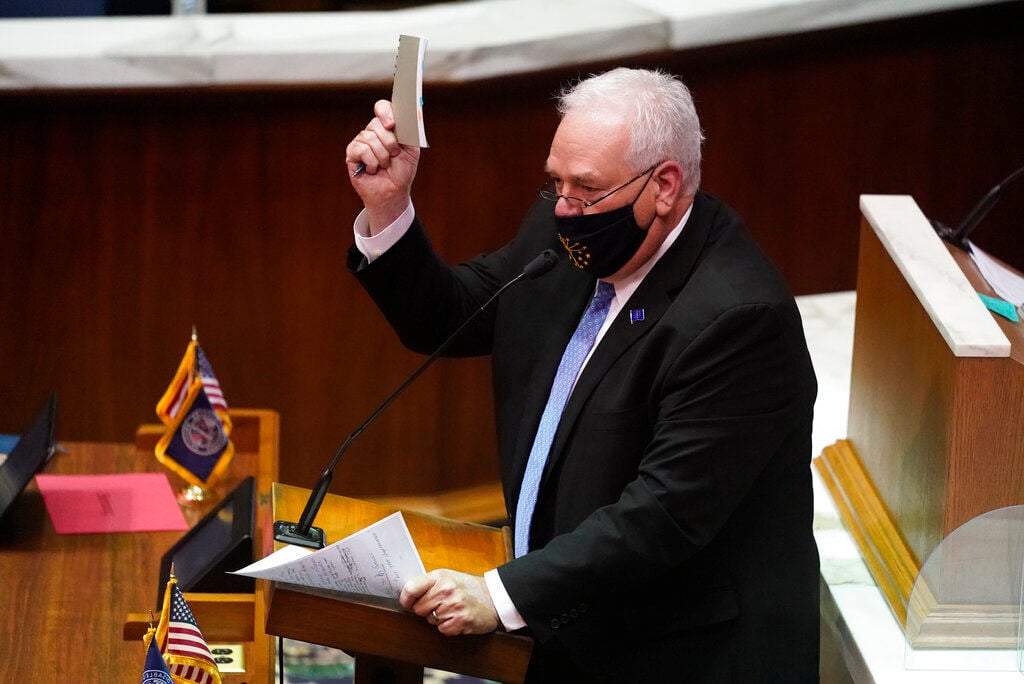 Rep. Matt Lehman speaks during Organization Day at the Statehouse in Indianapolis in November. 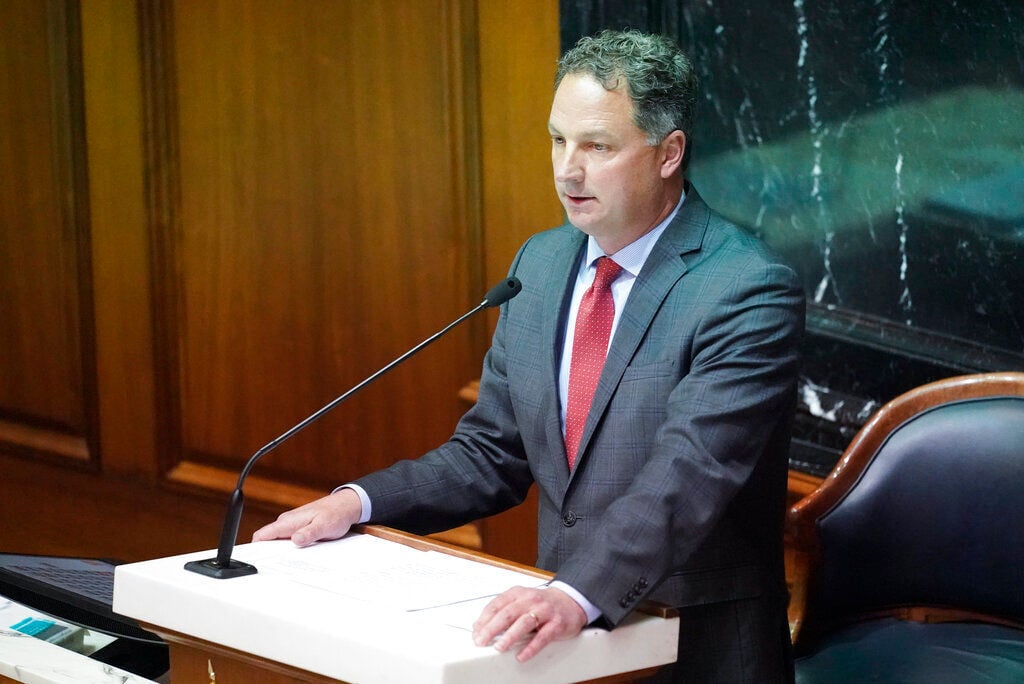 Indiana House Speaker Todd Huston speaks during Organization Day at the Statehouse on Tuesday in Indianapolis. Huston wore a mask throughout the day, except when he was speaking. 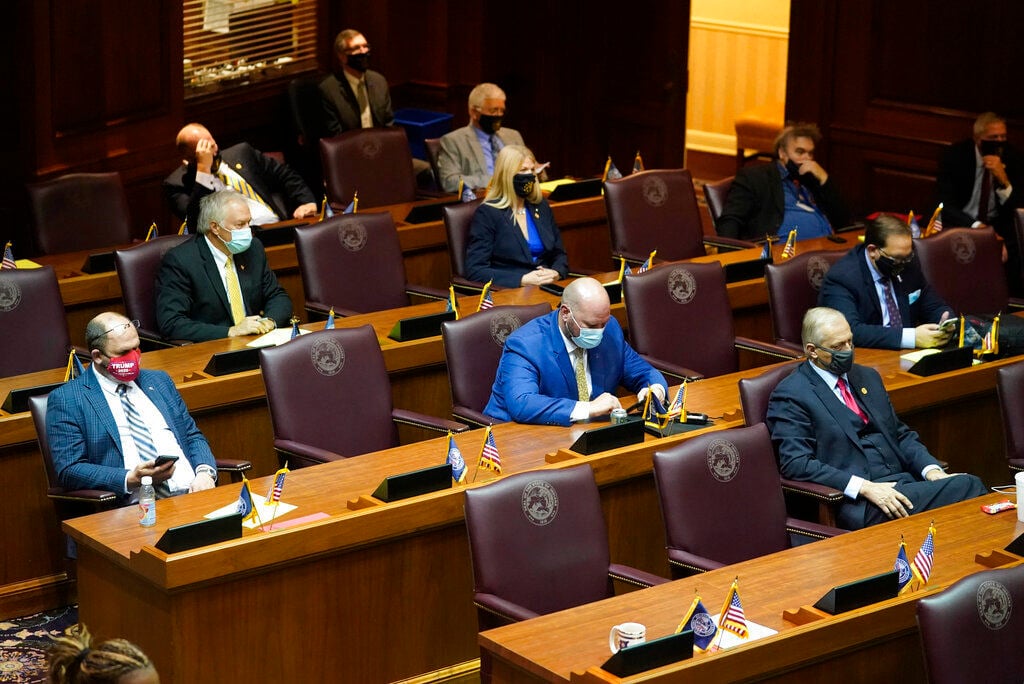 Members in the House of Representatives listen during Organization Day at the Statehouse in Indianapolis in November. 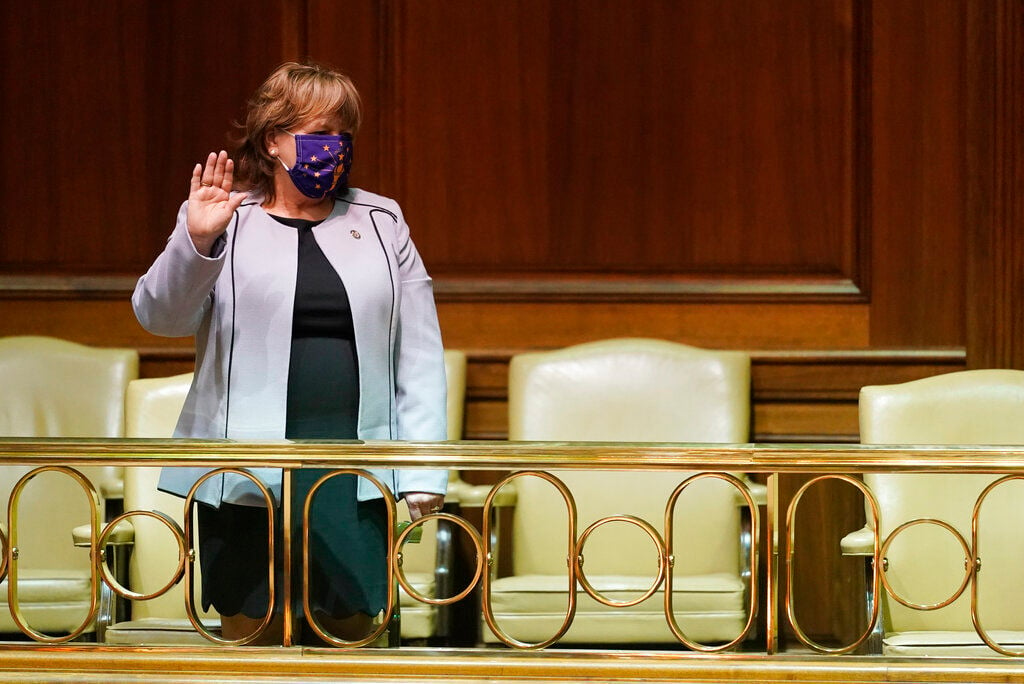 Rep. Karen Engleman takes the oath during Organization Day at the Statehouse in Indianapolis in November.

Partisanship prevailed over public health Tuesday when the Republican-controlled Indiana House voted along party lines to reject a rule proposed by Democrats that would have required lawmakers to wear face masks in the chamber to minimize the spread of COVID-19.

All but two legislators — state Rep. Curt Nisly, R-Milford, and state Rep. John Jacob, R-Indianapolis — already were wearing face masks during the ceremonial Organization Day meeting of the 2021 Indiana General Assembly at the Statehouse in Indianapolis.

Nisly and Jacob said they not only objected to Republican Gov. Eric Holcomb's directive that Hoosiers wear face masks in public places, but also filed a resolution to terminate Indiana's COVID-19 public health emergency and strip the governor of his emergency powers.

He could not stop, however, state Rep. Matt Pierce, D-Bloomington, from recommending the House adopt a rule to fine, censure or impose another penalty on members who refuse to wear a mask while engaged in official business.

Pierce said he could not imagine an environment more conducive to spreading disease than to repeatedly take 100 representatives and 50 senators from every corner of the state, bring them to a central location, put them in a largely closed-up building, have them work together for four or five days a week, and then send them back to their hometowns.

"Opting out in the name of individual freedom actually endangers other people," Pierce said. "We have to work together."

State Rep. Ed Delaney, D-Indianapolis, went a step further calling it "a failure of leadership" that a mask mandate wasn't included in the Republican-drafted House rules.

He prophesied the omission is all but certain to lead to a COVID-19 outbreak that shuts down the General Assembly for a period of time once lawmakers begin the four-month regular legislative session Jan. 4.

In response, state Rep. Matt Lehman, R-Berne, pointed out that censure and fines are among the most severe penalties available to the House for rule violations, typically used only for representatives who refuse to vote when called upon or deliberately fail to attend House sessions.

Lehman characterized the proposed face mask requirement as "a slippery slope" toward usurping the ability of lawmakers to represent their constituents as they see fit.

That argument prevailed with the 64 House Republicans in attendance, including the five from Northwest Indiana, who voted to reject Pierce's mask rule. All 28 House Democrats present, including the Region's seven, supported the rule.

As a result, masks will continue to be "strongly recommended" for members of both the House and the Republican-controlled Senate, which did not engage in a similar mask rule debate.

All legislative staff and Indiana citizens visiting the Statehouse, on the other hand, will be required to wear a face mask in accordance with the governor's directive.

Aside from the mask clash, it was a homecoming of sorts Tuesday at the Statehouse when two former Northwest Indiana lawmakers finally were able to drop the "former" from in front of their names.

State Rep. Hal Slager, R-Schererville, and state Rep. Julie Olthoff, R-Crown Point, both retook the seats each lost two years ago as they were sworn in to the 122nd Indiana General Assembly by Indiana Chief Justice Loretta Rush, who lived in Munster as a child.

Slager and Olthoff didn’t get the exact seats they previously used in the wood-paneled House chamber. In fact, due to COVID-19 precautions, lawmakers in both the House and Senate were spread out across the chamber floors and the upper level viewing galleries typically used by the public to monitor legislative action.

But being in the room where it happens was close enough for Olthoff and Slager, as well as the Region's newest lawmaker, state Rep Mike Andrade, D-Munster.

"I was happy to be back. Happy to see some of my old colleagues there. We've got exciting things happening," Olthoff said.

Among the first things Olthoff did was check out where she'll be seated when the House relocates in January to a large conference space in the Indiana Government Center South building, adjacent to the Statehouse, so representatives can sit at least 6 feet apart while proposing, debating and voting on new state laws.

She hopes it will somewhat resemble the usual House atmosphere she felt was missing Tuesday with no staff milling about the chamber, lawmakers mostly sitting quietly in their seats, and entry and exit organized to prevent bunching in the hallways.

"That was something I noticed, how quiet the chamber was before we got started," Olthoff said. "It was different. But what we needed to do."

Slager said his experience going back to the Statehouse was like trying to drink water from a fire hose, between reconnecting with old friends, meeting the new members, and starting to craft the 10 legislative proposals he plans to file next year.

"I'm going to try to pick up where I left off," Slager said. "Frankly, I've already been handling some issues, taking calls, and working on getting some bills put together."

"So this (Organization Day) was really just kind of a formality."

Both Slager and Olthoff said they had no qualms voting against adding a mask requirement to the House rules. Olthoff said imposing a penalty for not wearing a mask "is going a step too far for my taste."

Slager agreed. He said lawmakers just need to be responsible and recognize that a face mask protects others, even if someone doesn't want to wear one to protect themselves.

"It's just that simple, being responsible," Slager said. "We don't need motions and resolutions and mandates for that."

For Andrade, who succeeded former state Rep. Mara Candelaria Reardon, D-Munster, after she declined to run for reelection, just being in the House chamber at the first meeting of the year was "an honor."

"Right now I'm just soaking everything in," Andrade said. "I'm just humbled for the opportunity. It's a beautiful place and there's a lot to learn."

Andrade said he's looking forward to collaborating with his new legislative colleagues, especially since there aren't enough votes on the Democratic side of the aisle to advance legislation without Republican support.

Photos: Across the Midwest, businesses fight to continue during COVID-19

Photos: Across the Midwest, businesses fight to continue during COVID-19

Report: If Indiana were a country, its COVID-19 mortality rate would be 35th worst in the world

Indiana ranked 35th in the world in per capita COVID-19 deaths last week, according to an analysis performed by the Federation of American Scientists.

Newly elected and returning Hoosier lawmakers are convening Tuesday at the Statehouse for the one-day ceremonial opening of the 2021 Indiana General Assembly amid the global coronavirus pandemic.

A Northwest Indiana state senator reelected last week to a second four-year term has been chosen by his colleagues to help lead the Senate Democratic Caucus.

Hard work and high turnout appear to be the factors that helped two Republican former state representatives take back their Indiana House seats that were lost to Democrats two years ago.

If Gov. Eric Holcomb wins a second term in Tuesday's general election he will have prevailed in two of the most unusual political campaigns in Indiana history.

The COVID-19 classification for Lake and Porter counties was set at the highest-possible "red" level Wednesday, triggering a series of restrictions aimed at minimizing the spread of the coronavirus.

The state health commissioner is recommending Hoosiers not host or attend large Thanksgiving gatherings next week and instead celebrate the holiday only with those already living in their household.

Three leading U.S. medical and health organizations are pleading with Americans to scale back their Thanksgiving celebrations this year to minimize the spread of COVID-19.

State Rep. Mike Andrade, D-Munster, has partnered with local businesses to give away 50 turkeys to House District 12 residents in need.

Two organizations that usually take very different positions on Indiana public policy issues are coming together to urge Hoosiers to redouble their efforts to limit the spread of COVID-19.

Study finds 10.6% of Hoosiers have been infected by COVID-19; Indiana nowhere close to 'herd immunity'

Indiana is a long way from achieving so-called "herd immunity" and getting there would cost at least 13,000 additional lives, according to a first of its kind Indiana University study.

Republican lawmakers from Northwest Indiana next year will play significant roles in shaping some of the most consequential policies set to be enacted by the General Assembly.

More than 40 interest groups are urging state lawmakers to improve transparency and public participation in Indiana's legislative process, especially in light of the coronavirus pandemic.

The leader of the Indiana House of Representatives was among the 5,853 Hoosiers who tested positive for the coronavirus Wednesday.

By any measure, things will be far from business as usual when the gavels slam down shortly after noon Region time Monday and the Indiana House and Senate come to order.

"It's calling now for coequal branches of government ... to make sure we're working together for good public policy during difficult times," said state Rep. Matt Lehman.

State Sen. Jim Buck, R-Kokomo, views the legislation as a way to transition to all-electronic public notices, instead of local governments paying to publish the notices in a newspaper.

"Human trafficking is a worldwide problem, and it is happening right here in our state," said state Rep. Julie Olthoff, R-Crown Point.

Rep. Matt Lehman speaks during Organization Day at the Statehouse in Indianapolis in November.

Indiana House Speaker Todd Huston speaks during Organization Day at the Statehouse on Tuesday in Indianapolis. Huston wore a mask throughout the day, except when he was speaking.

Members in the House of Representatives listen during Organization Day at the Statehouse in Indianapolis in November.

Rep. Karen Engleman takes the oath during Organization Day at the Statehouse in Indianapolis in November.