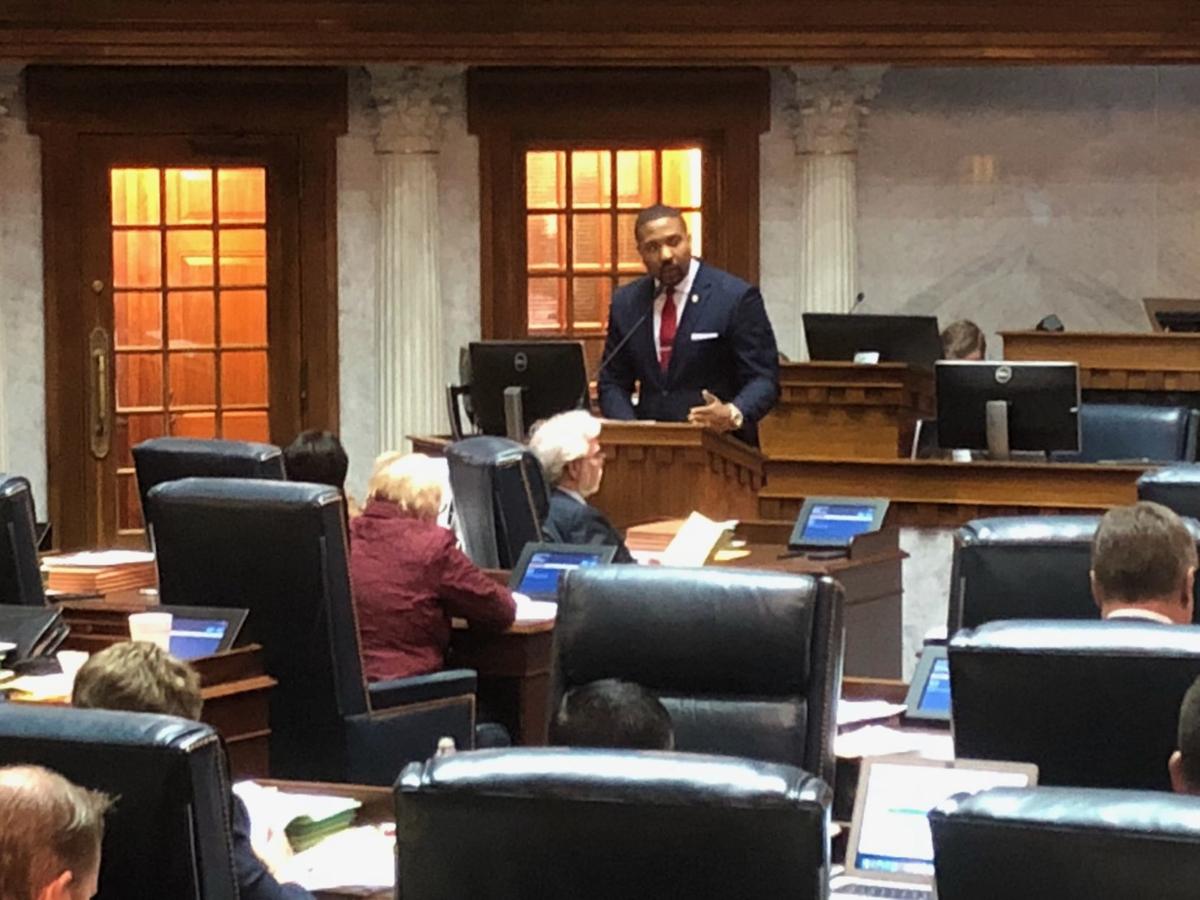 State Sen. Eddie Melton, D-Gary, speaks Tuesday to the Indiana Senate about the economic development opportunities at Buffington Harbor if Senate Bill 66 is enacted into law. The measure was approved 43-6 and now goes to the House. 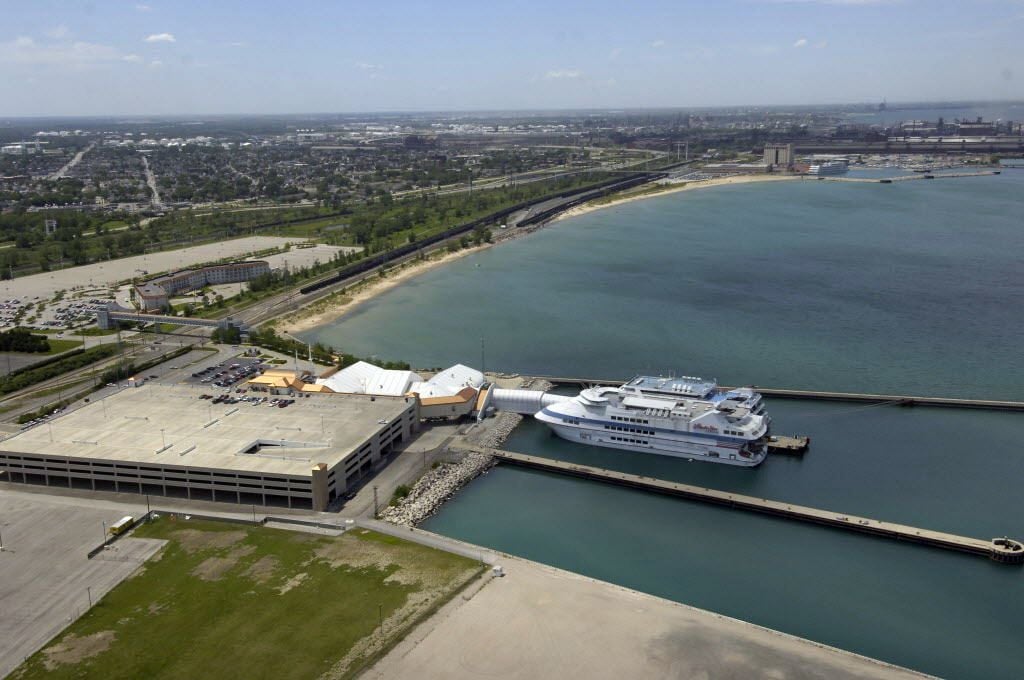 Legislation approved by the Indiana Senate would put a new government entity, known as the Gary Indiana Transmodal Compact, in charge of developing Gary's Buffington Harbor (pictured), adjacent rail lines and the city's airport, once the Majestic Star casino boats, hotel and parking are moved to an inland location elsewhere in the city. 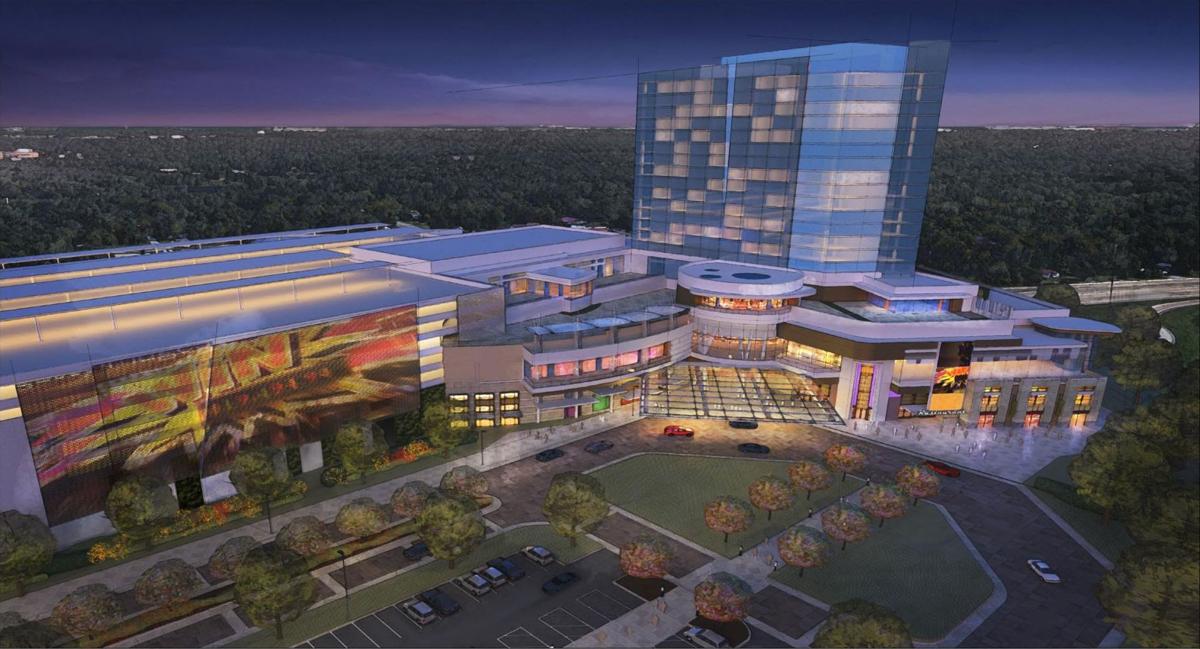 Senate Bill 552, which passed 38-11, permits Gary's Majestic Star casinos to relocate to a new land-based site, likely adjacent to the Borman Expressway, and allows the second Gary gaming license to be used to open a new casino in Terre Haute.

Thanks to a "hold-harmless" amendment added Monday, the casino cities of Hammond, East Chicago and Michigan City, along with LaPorte County, would suffer no loss of gaming tax revenue for three years following the Gary casino move, which is likely to initially attract players from other Region casinos due to its more accessible location away from Lake Michigan.

The gaming legislation, which now goes to the House, also legalizes sports wagering, including on mobile devices; removes the two-casino ownership cap; and permits live dealers for table games at the central Indiana horse track casinos starting this year, instead of 2021; among other provisions.

State Sen. Mark Messmer, R-Jasper, the sponsor, proclaimed the measure is "a once-in-a-generation opportunity to reset the casino industry in Indiana."

"It will help our existing casino operators be more competitive and will maximize our ability as a state to benefit from increased gaming revenues to our general fund, without increasing the number of licenses and staying within the caps that were established in 2013 for the number of positions at each facility."

State Sen. Eddie Melton, D-Gary, said in addition to the 400 anticipated new jobs at the planned, $300 million Gary land-based casino and hotel, the overall proposal better prepares Northwest Indiana to withstand the likely expansion of casinos across the state line in Illinois.

"I see this as an opportunity as a state to be proactive, instead of reactive," Melton said.

At the same time, the measure faces an uncertain fate across the Statehouse rotunda, since House Speaker Brian Bosma, R-Indianapolis, said Tuesday that he considers the proposal to be an unacceptable expansion of gaming in Indiana.

"If there's a new casino facility, I don't know how anyone could argue that it is not an expansion," Bosma said.

There is, however, more at stake than expansion semantics, since the gaming legislation is inextricably intertwined with a separate measure providing for the redevelopment of Gary's Buffington Harbor after the Majestic Star casinos move out.

Senate Bill 66, which passed the Senate 43-6, establishes a new "Gary Indiana Transmodal Compact" to oversee, direct, support, coordinate and plan for the development, enhancement and operation of city-owned infrastructure at Buffington Harbor and the Gary/Chicago International Airport.

Melton said the Steel City is perfectly situated to become an intermodal alternative to Chicago, since it has water, rail, air and highway access all near one site, along with plenty of land at Buffington Harbor for storing and transferring goods.

"This is not some type of pie-in-the-sky, this is not some wishing that's taking place," Melton said. "This has been truly vetted by experts, and this is something that would truly be transformational."

The compact would be led by a board with nine voting members — four from the city and five from the state — along with two nonvoting members representing the Northwest Indiana Regional Development Authority and the World Trade Center Indianapolis.

Initial funding for compact projects would come through a local development agreement struck with the operator of the Terre Haute casino.

The proposal also directs Ivy Tech Community College, and other relevant state agencies, to provide Gary and Lake County residents with employment training programs, contracting assistance and other services to help them prepare for jobs in gaming, intermodal transportation and building trades positions connected to the development.

"It's no secret that Gary has faced its challenges like many Rust Belt cities across the United States," Melton said. "But I truly believe that we're reaching a turning point."

State Sen. Rick Niemeyer, R-Lowell, who opposed the Buffington Harbor project when it was reviewed last summer by a legislative study committee, said he now sees it as a realistic development opportunity that could pay off for the Region and the state.

But Niemeyer cautioned that the focus of Lake County improvements shouldn't only be on Gary.

He said the southern portion of the county is booming in terms of residents and jobs, and could grow even more with targeted regional and state support.

"We're where the growth is at right now," Niemeyer said. "If we want true economic development in Northwest Indiana that's where we need to look."

INDIANAPOLIS — Depending on who you ask at the Statehouse, the 2019 General Assembly either is on its way toward accomplishing great things fo…

Casino revenue off slightly in March

Northwest Indiana's casinos ended the first quarter of 2019 with gaming revenue off 3.6 percent from the same period a year ago, having taken …

INDIANAPOLIS — A new government entity, composed of local and state officials, would be in charge of developing the Gary lakeshore and airport…

INDIANAPOLIS — A strategic plan to develop Gary into a transportation, freight and logistics hub is set Monday to be evaluated by a panel of H…

State Sen. Eddie Melton, D-Gary, speaks Tuesday to the Indiana Senate about the economic development opportunities at Buffington Harbor if Senate Bill 66 is enacted into law. The measure was approved 43-6 and now goes to the House.

Legislation approved by the Indiana Senate would put a new government entity, known as the Gary Indiana Transmodal Compact, in charge of developing Gary's Buffington Harbor (pictured), adjacent rail lines and the city's airport, once the Majestic Star casino boats, hotel and parking are moved to an inland location elsewhere in the city.