It currently is legal for an Indiana employer to fire a worker, a landlord to evict a tenant, or a business to deny service to a person or group of people due to their sexual orientation or gender identity.

Such discrimination only is prohibited by the Indiana Code when it is based on the race, religion, color, sex, disability, national origin or ancestry of the person being denied opportunities, services or equal access to public accommodations.

Senate Democratic Leader Tim Lanane, D-Anderson, said it's long past time for Indiana's anti-discrimination laws to be expanded to include LGBTQ individuals, as well as adding protections for veterans, and employing broader definitions of disability and ancestry.

"No Hoosier should be fired from a job or denied housing solely because of whom they love or whom they choose to marry," Lanane said. "My bill simply extends protections already in place to be more inclusive of the people who live and work in our state."

At the same time, Lanane said it's unbelievable Indiana still has not enacted such protections nearly five years after the state attracted international condemnation for enacting a "religious freedom" law many believe initially licensed LGBTQ discrimination.

"Only by amending our state civil rights act to affirmatively outlaw such discrimination do we finally declare that Indiana welcomes and protects everyone," Lanane said.

Republican Gov. Eric Holcomb, who said when he ran for governor in 2016 that he believed local ordinances offered sufficient protections for most Hoosiers, said in an exclusive interview with The Times that he was not aware of Lanane's proposal.

"I've yet to talk to Sen. Lanane. I'm happy to. The first I'm hearing about this is from you, not him," Holcomb said.

Holcomb did not speculate on the prospects of Lanane's anti-discrimination measure being enacted when the General Assembly convenes its 10-week session Jan. 6.

"We'll have a few months to dig at these types of issues," Holcomb said.

But even Senate Enrolled Act 198 did not explicitly list sexual orientation or gender identity as protected classes under the bias crime law.

Instead, it indirectly included them by referring to those terms as used in another section of the Indiana Code.

INDIANAPOLIS — And then there were four.

INDIANAPOLIS — The Hoosier State finally is enacting a bias crime statute, becoming the 46th state to do so, following more than three decades…

Statehouse wrangling over bias crime legislation could be over soon

INDIANAPOLIS — The bias crime debate that has roiled the Indiana General Assembly this year could be over next week, if the Senate accepts a H…

Indiana is still a state where a man or woman legally can wed his or her same-sex partner on a Sunday, and legally get fired for being gay on …

'Super RFRA' fails to advance out of Senate committee

INDIANAPOLIS — As the Republican-controlled General Assembly prepares to debate gay rights for the third year in a row, two recent statewide p…

INDIANAPOLIS | The 2015 meeting of the Indiana General Assembly that adjourned for the year Wednesday was, as Gov. Mike Pence requested, an "e…

INDIANAPOLIS | Indiana ain't ready for reform -- at least when it comes to designating lesbian, gay, bisexual and transgender Hoosiers a prote…

INDIANAPOLIS | Gov. Mike Pence signed into law a "religious freedom" measure Thursday that critics in Northwest Indiana and across the nation …

The Indiana General Assembly convenes its annual session Monday, and Hoosier lawmakers are scheduled to continue meeting weekdays at the State…

Speed will be the theme of the year when Hoosier lawmakers return to the Statehouse Monday for the annual Indiana legislative session.

Senate Bill 2, approved Monday by the Senate Education Committee, would assign the A-F letter grade a school received during the 2017-18 school year for both its 2018-19 and 2019-20 accountability rating, unless the school otherwise earned a better grade.

The Indiana Court of Appeals has admonished a Newton County judge for ignoring the law and disrespecting a transgender Hoosier seeking a name and gender marker change. 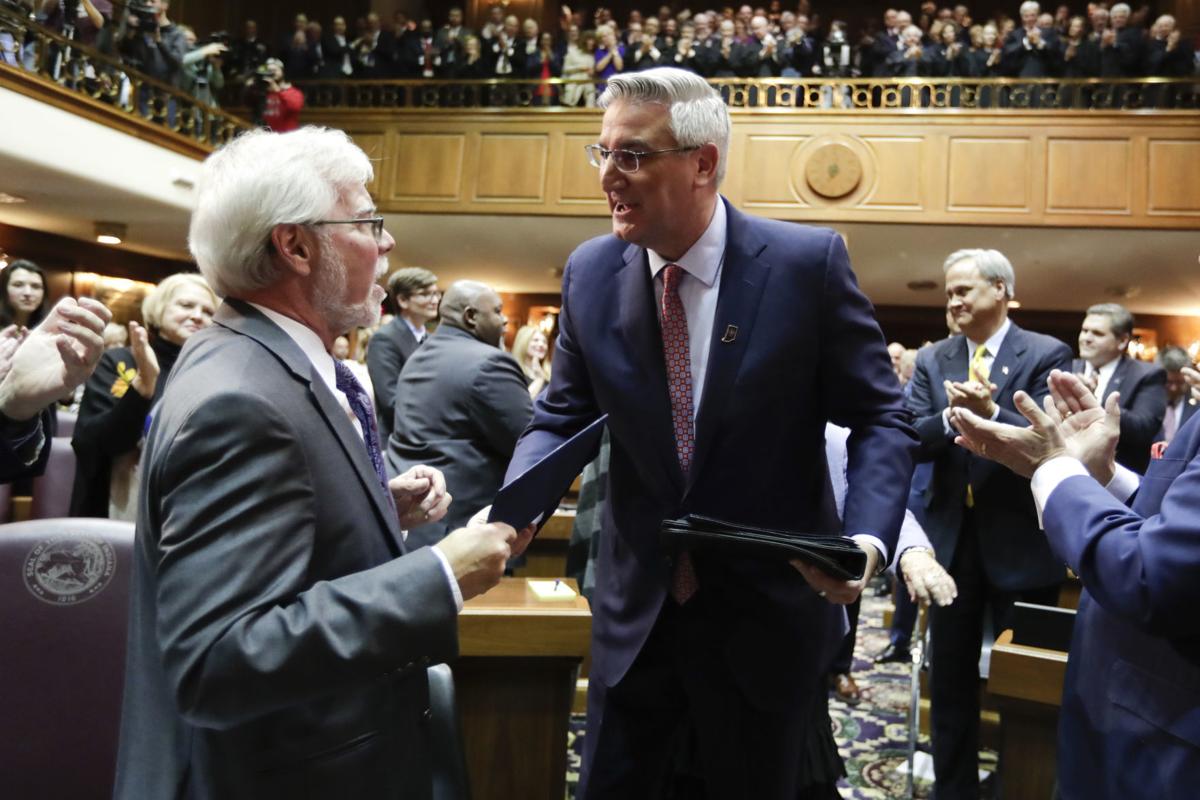 Indiana Gov. Eric Holcomb, center, greets Senate Democratic Leader Tim Lanane, left, D-Anderson, as Holcomb arrives in the House chamber to deliver his State of the State address to a joint session of the legislature at the Statehouse in Indianapolis on Jan. 15, 2019. 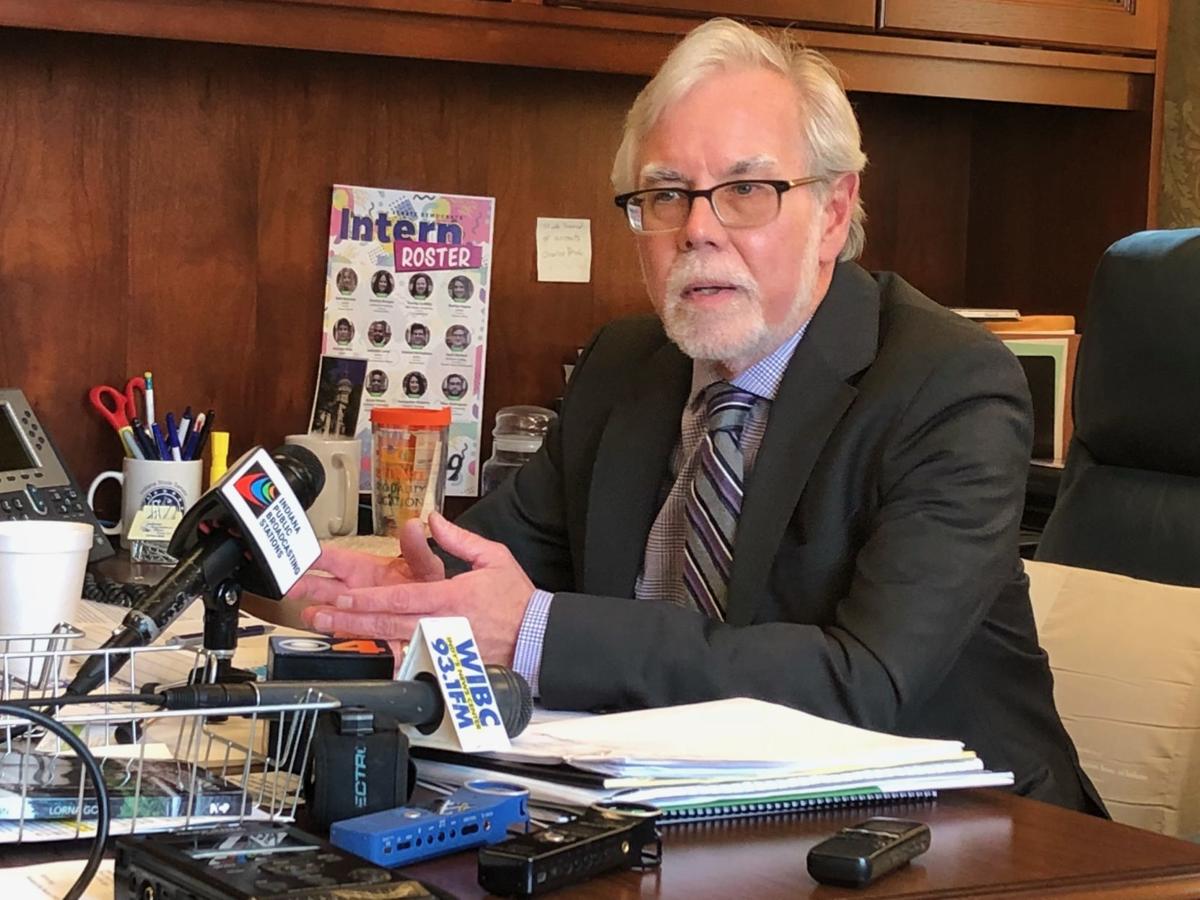