Hoosier lawmakers working to craft the new, two-year state budget ahead of an April 29 deadline likely will have additional money available to spend on education, teacher pay raises, and myriad other state needs or wants.

February sales tax collections, largely reflecting January purchases, totaled $695.2 million, which was $62.4 million, or 9.9%, greater than the revenue forecast, according to the State Budget Agency.

The State Budget Agency attributed some of the increase to spending associated with the $600 federal stimulus payment many Hoosiers received in late December or early January.

That suggests state sales tax revenue is destined to soar even higher once Hoosiers begin receiving the $1,400 payment included in the American Rescue Plan that’s due to win final U.S. House approval Tuesday, and then promptly be signed into law by Democratic President Joe Biden.

Data show Hoosier workers certainly can use the extra money.

While the $278.4 million in February state income tax revenue topped expectations by $90.6 million, or 48.3%, after also beating the January target by $148.8 million, or 21.4%, income tax payments attributable to employee payroll withholding — as opposed to quarterly payments from high earners or investors — was $36.8 million less than projected for February, and down $33.7 million compared to February 2020, according to the State Budget Agency.

In addition, the State Budget Agency said the late opening of this year's income tax filing season means Indiana has yet to pay an estimated $130 million in income tax refunds that normally would have gone back to Hoosiers by this point of the year.

“As more returns are processed, refunds could increase above monthly estimates starting in March and converge back towards the projected trend on a fiscal year-to-date basis,” the State Budget Agency said.

“Overall, fiscal year-to-date collections over the coming months and particularly between April and June will provide a better perspective as the timing of payments and refunds becomes less of a factor.”

The Republican-controlled General Assembly already was counting on approximately $800 million in one-time money available to spend during the two-year period that begins July 1, along with some $35 billion in ongoing appropriations.

Republican Gov. Eric Holcomb recommended most of the extra money be put toward paying down state debt.

However, the House last month voted to use it instead to expand Indiana’s private school voucher program, create a new education entitlement program for some families opting out of public and private schools, and to fund programs aimed at remediating student learning loss and assisting small businesses harmed by the COVID-19 pandemic.

The American Rescue Plan provides federal funding for the latter two programs, meaning the state funds allocated for them by the House likely will be repurposed in the Senate version of House Bill 1001, and play a key role in final budget negotiations next month between the governor, the House and the Senate.

While every Republican representing Indiana in Congress voted against the American Rescue Plan, including U.S. Sens. Todd Young and Mike Braun, the General Assembly is unlikely to turn down the federal resources despite its Republican supermajorities. 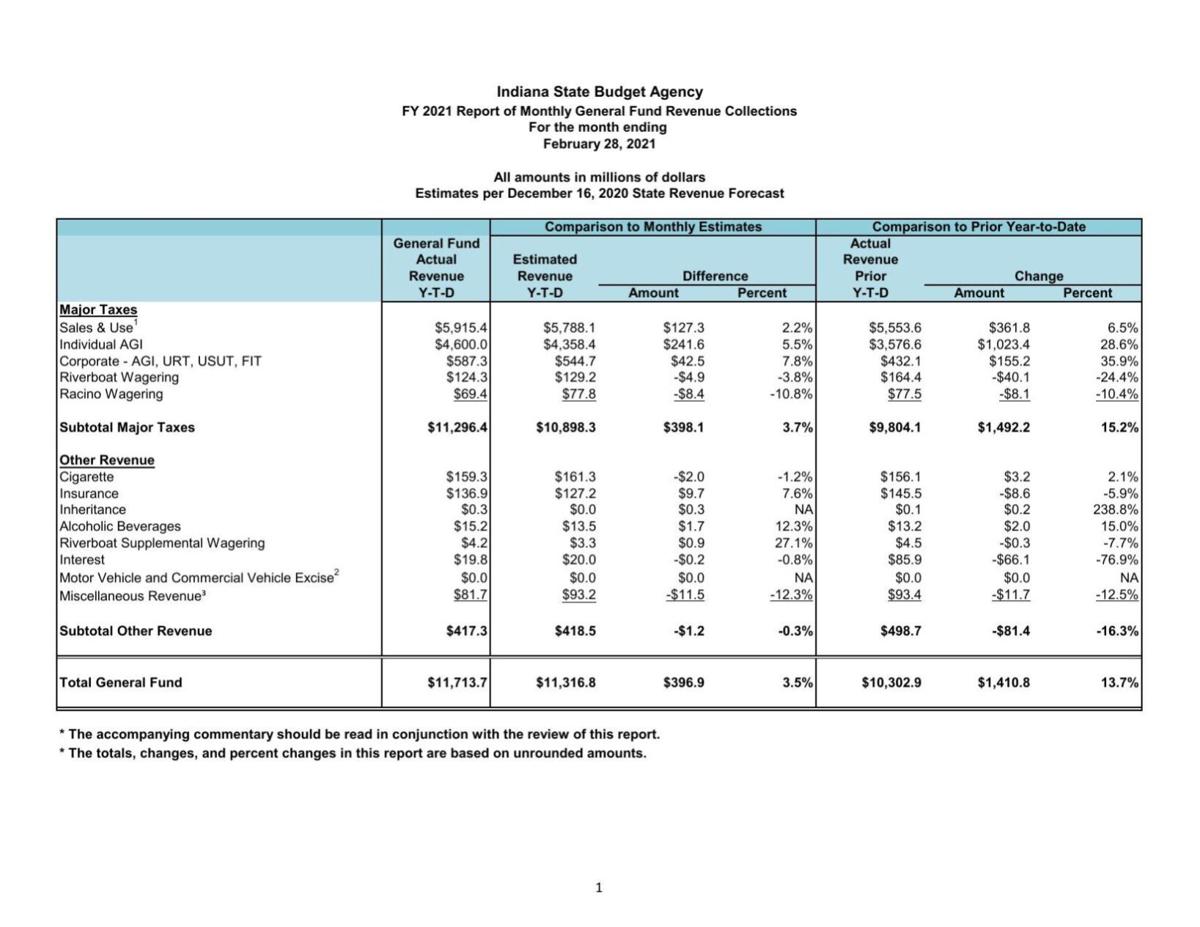 The Republican-controlled Indiana House has voted to increase the state's cigarette tax by 50 cents per pack and impose a new 10% sales tax surcharge on vaping products. The bill now heads to the Senate.

The budget also includes a 50 cents per pack cigarette tax increase — instead of the $1 per pack sought by state Rep. Julie Olthoff — along with a 10% surcharge on vaping products.

Holcomb is proposing Indiana maintain its strong financial condition, notwithstanding the COVID-19 pandemic, while providing a modest education spending increase and paying down state obligations.

The Hoosier State will not immediately be joining Texas and Mississippi in scrapping the governor’s directive for individuals to wear a face mask in public places.

U.S. Rep. Frank J. Mrvan said the American Rescue Plan "will provide direct and tangible investments to address the pandemic, provide much needed relief for our families, and grow our economy."

“We have the ability to emerge, and accelerate away from this pandemic, because of the strong position we went in and this assistance that’s coming our way,” said Gov. Eric Holcomb.

Gov. Eric Holcomb on Monday signed an executive order shifting Indiana's income tax filing and payment deadline to May 17, instead of April 15.

Hoosiers struggling under the burden of overdue, unpaid debts could see the money they owe deducted from their $1,400 federal stimulus check.

“We continue to pass legislation that continues to hurt our teachers. We are losing them in droves in our state because they feel we don’t value them, we don’t support them," said state Rep. Mike Andrade, D-Munster.

"We know the next couple weeks will be interesting. They always are," said House Speaker Todd Huston, R-Fishers.

The updated state revenue forecast projects Indiana will take in nearly $2 billion in additional tax revenue during the 2022-23 budget period than lawmakers were anticipating.

Altogether, schools in Lake, Porter and LaPorte counties are in line to get a combined $282 million, according to the preliminary estimates.

"The Endless Frontier Act is about using (China's) challenge to become a better version of ourselves through investment in innovation," said U.S. Sen. Todd Young, R-Ind.

"I don't think Democrats have celebrated or talked about the hard work we've done because many of us don't look for the pat on the back, we just do the work," said state Sen. Eddie Melton, D-Gary.

The 188,400 Indiana residents who requested an extension to file their 2020 federal income tax returns have until Oct. 15 to get them in, according to the IRS.