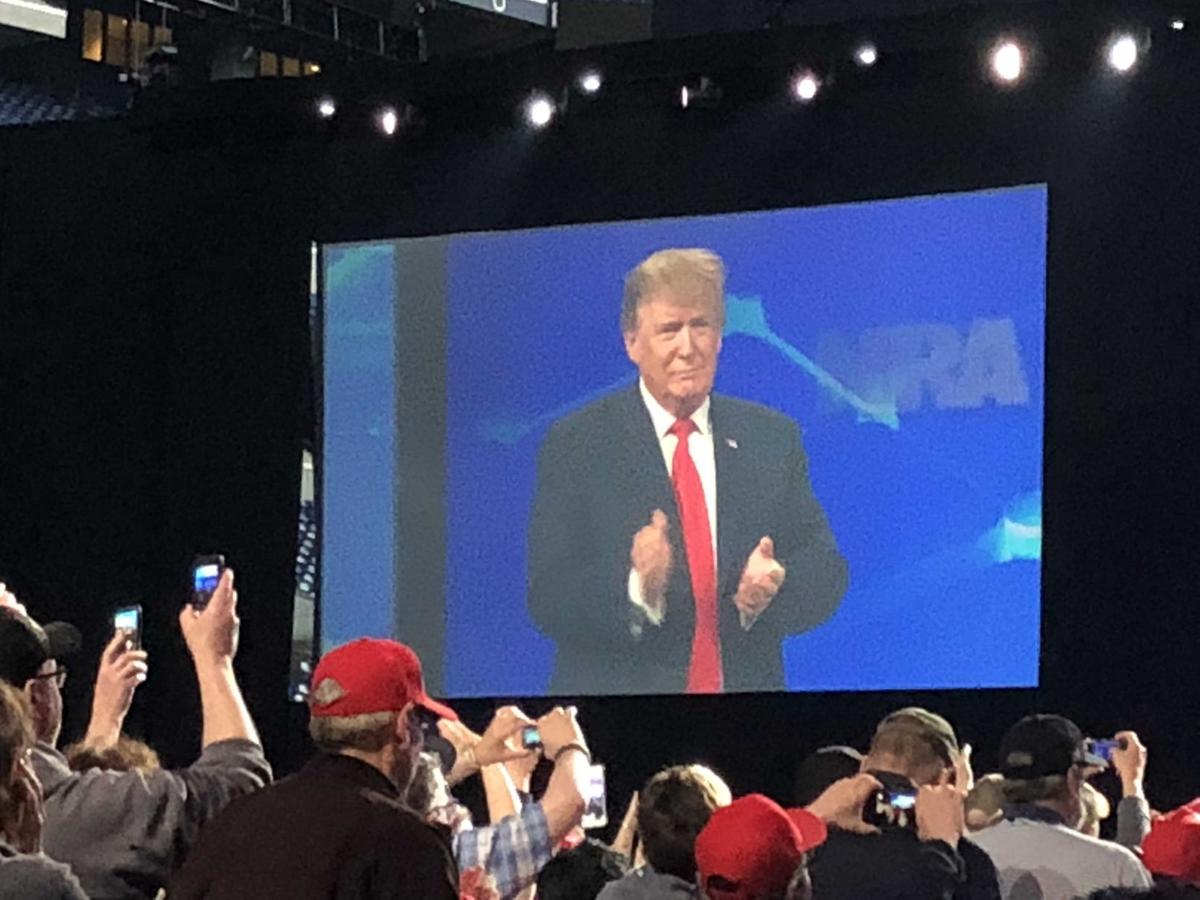 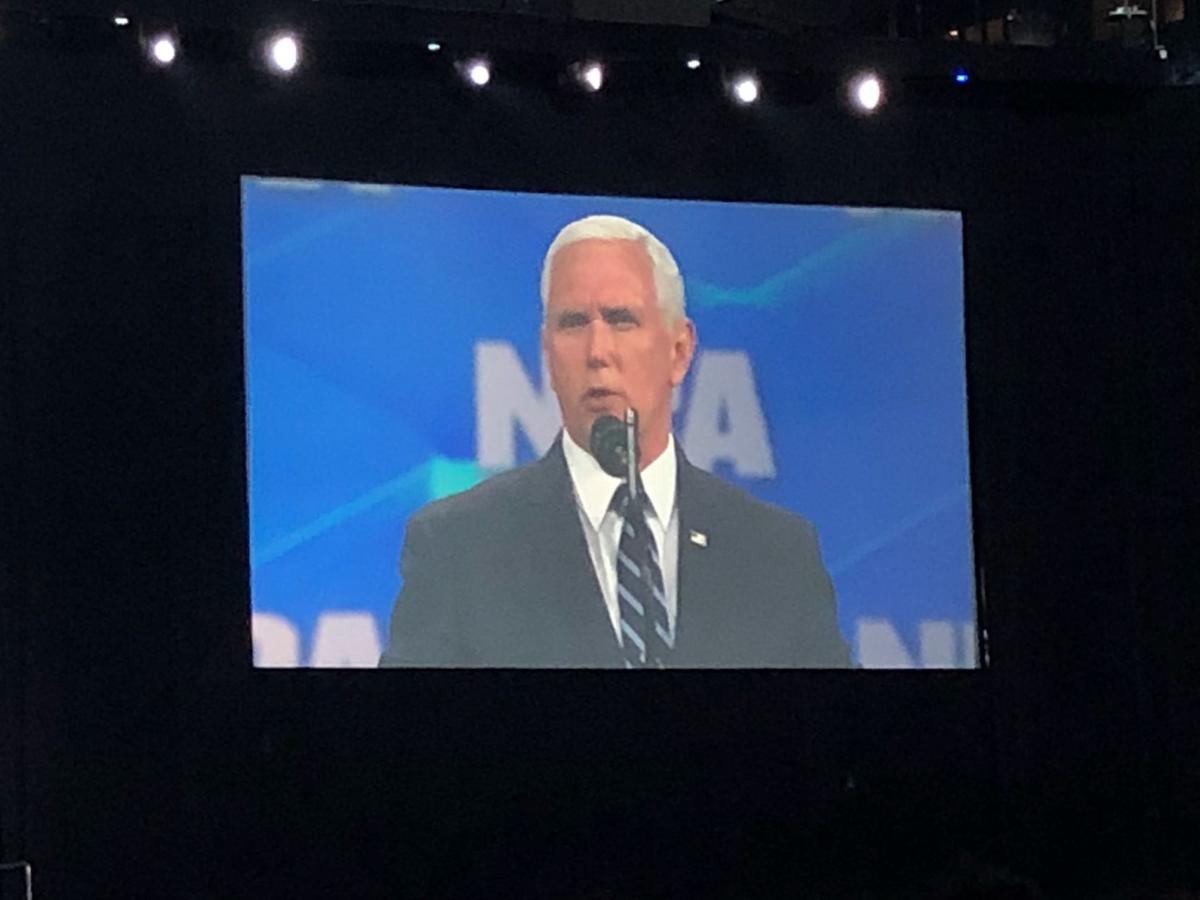 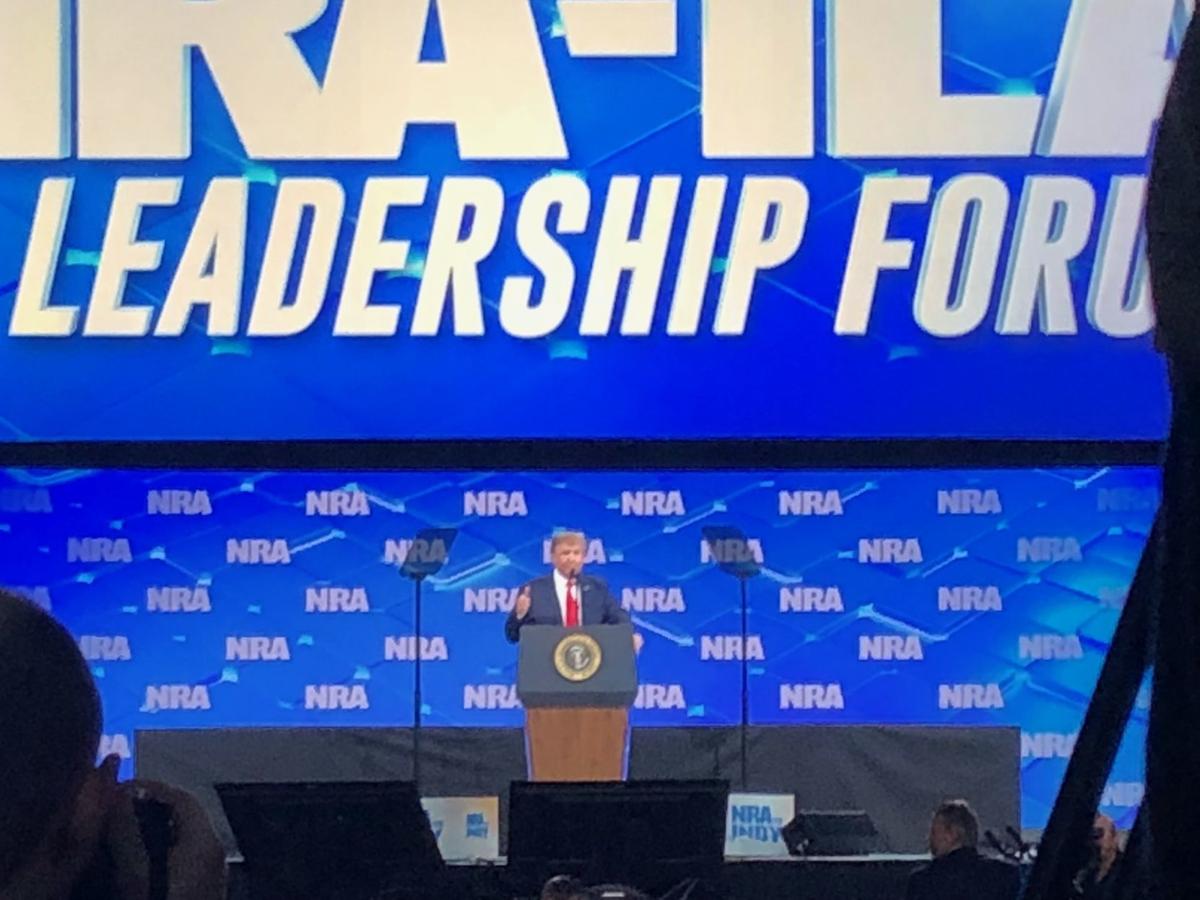 INDIANAPOLIS — In front of some of the nation's most enthusiastic gun owners, President Donald Trump and Gov. Eric Holcomb separately signed measures Friday demonstrating their commitment to the right of law-abiding Americans to possess and use guns.

Both leaders, along with Vice President Mike Pence, also assured the 15,000-strong audience inside Lucas Oil Stadium for the National Rifle Association's annual convention that no law limiting Second Amendment freedoms ever will take effect while they hold office.

To that end while on stage, Trump used a black marker to sign a letter to the U.S. Senate directing lawmakers to no longer consider ratifying the Arms Trade Treaty. That document was signed on behalf of the United States in 2013 by then-Secretary of State John Kerry.

The treaty, so far ratified by 101 nations, requires signatories to adopt standardized import and export regulations for firearms, similar to those already in effect in the United States, to ensure weapons dealers are not violating arms embargoes or selling guns, tanks, combat aircraft or warships to terrorist organizations or human rights abusers.

Trump, however, insisted the treaty threatens the ability of individual Americans to possess and own guns, and he's eliminating that threat by removing the prior administration's consent to its terms.

"Under my administration, we will never surrender American sovereignty to anyone," Trump said. "We will never allow foreign bureaucrats to trample on your Second Amendment freedoms."

Chris Cox, executive director of the NRA's Institute for Legislative Action, called the president's move necessary to combat what Cox described as an "unconstitutional" treaty.

"Donald Trump isn't afraid to stand on the side of freedom and defend our God-given right to self-defense, and we couldn’t be prouder to stand with him," Cox said.

In that same vein, Trump warned the NRA audience that their gun rights would be immediately imperiled if "radical Democrats" are elected to federal and state offices.

"Democrats want to disarm law-abiding Americans, while allowing criminal aliens to operate with impunity. But that will never happen as long as I'm your president — not even close," Trump said.

Pence affirmed that "under this president and this vice president — no one is taking your guns."

"Firearms in the hands of law-abiding citizens don't threaten our families. They protect our families," said Pence, a former Indiana governor.

"If you'll permit me to brag a little bit about our state, I'll tell you that there's simply no place more friendly and more supportive of the Second Amendment than right here on Hoosier soil," Holcomb said.

The new law provides, starting July 1, that any person legally authorized to carry a firearm may possess it in a school building when the building is being used by a church or other house of worship.

Similarly, a gun owner can bring his or her weapon into any church or religious building that's connected to a school, so long as the religious institution permits guns within its facilities.

In addition, a Hoosier who uses a gun in self-defense — whether at a church, school, home or anywhere else — cannot be sued for civil damages if the person shot was committing a forcible felony or causing serious bodily injury to another person.

State Sen. Jim Lucas, R-Seymor, the sponsor of the new law, said the signings and the NRA convention have been, for him, like "going to Disneyland."

"We can't forget the importance of being able to protect yourself at a moment's notice," Lucas said. "When time is the most important, we don't have time to wait for others to get there."

"Camp Atterbury will serve as an exceptional venue for marksmanship championships that promote education and responsibility," Holcomb said.

"This new center will provide great economic benefits for central Indiana with the safety, training and competition opportunities for thousands of citizens, law enforcement and military personnel."

Hoosier lawmakers OK guns in schools when building is used by, or attached to, a house of worship

Holcomb implements some recommendations of his school safety task force, leaves others for General Assembly

INDIANAPOLIS — Gov. Eric Holcomb is immediately implementing four of the 18 recommendations of his school safety task force, while leaving to …

INDIANAPOLIS — The state has ordered 3,228 hand-held metal detectors for delivery in August to the 369 school corporations, charter schools an…

Owner of stolen handgun not liable for child's death even when weapon is kept loaded, visible in unlocked vehicle, court rules

INDIANAPOLIS — The state's capital city in 2018 broke its all-time record for criminal homicides for the fourth consecutive year.

If wars of the future are fought by soldiers operating on digital battlefields instead of with boots on the ground, the Hoosier State will be ready.

Departing from norm, Indiana could limit access to guns for some individuals

An Indiana lawmaker's Facebook post featuring an image of a nearly naked dancing African child and the words "We gon' get free money!" is being called racist and spurring calls for his resignation.

Hoosiers may get to carry handguns in public without a license

The Indiana House voted to allow any handgun owner to automatically have their gun with them at all times without the police background check, fingerprinting and fees currently required by state law.