UPDATE: Beach reopenings challenged by coronavirus and erosion
0 Comments
Share this
1 of 9 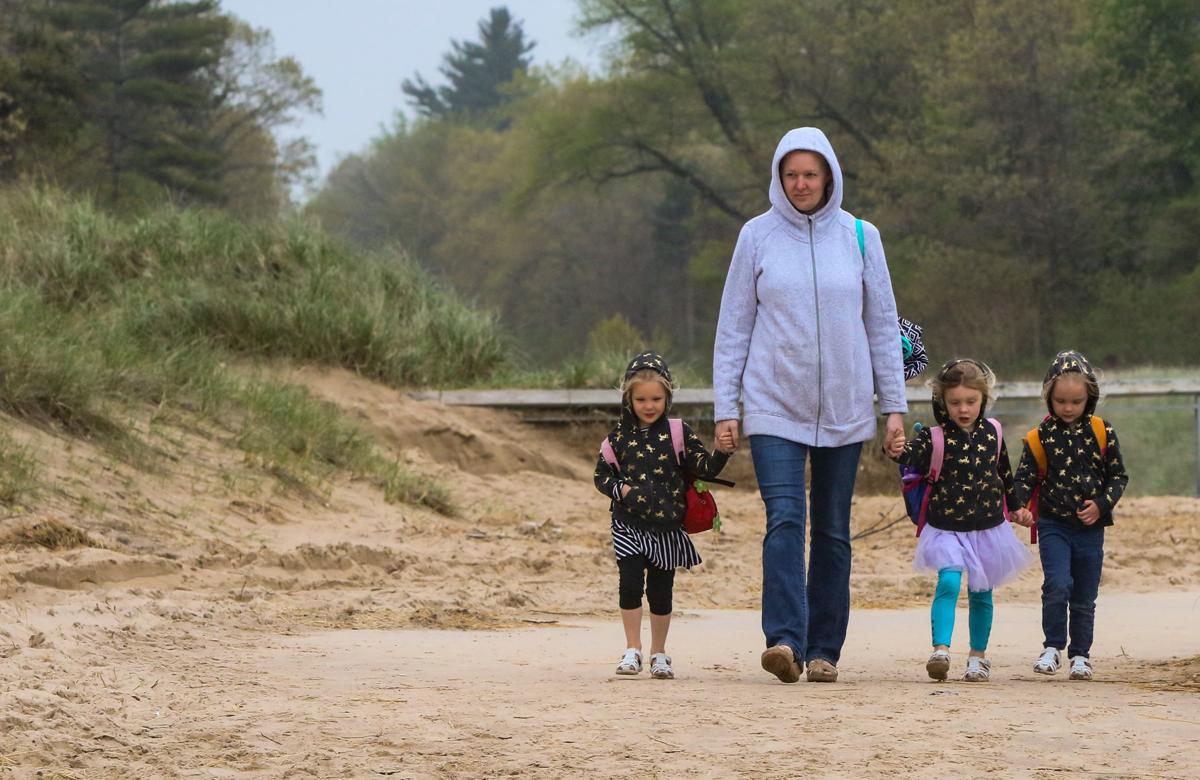 April Sokolova, of Schererville, escorts her 4-year-old triplets Corrina, Lydia and Helena to the beach at the Indiana Dunes National Park on Tuesday. 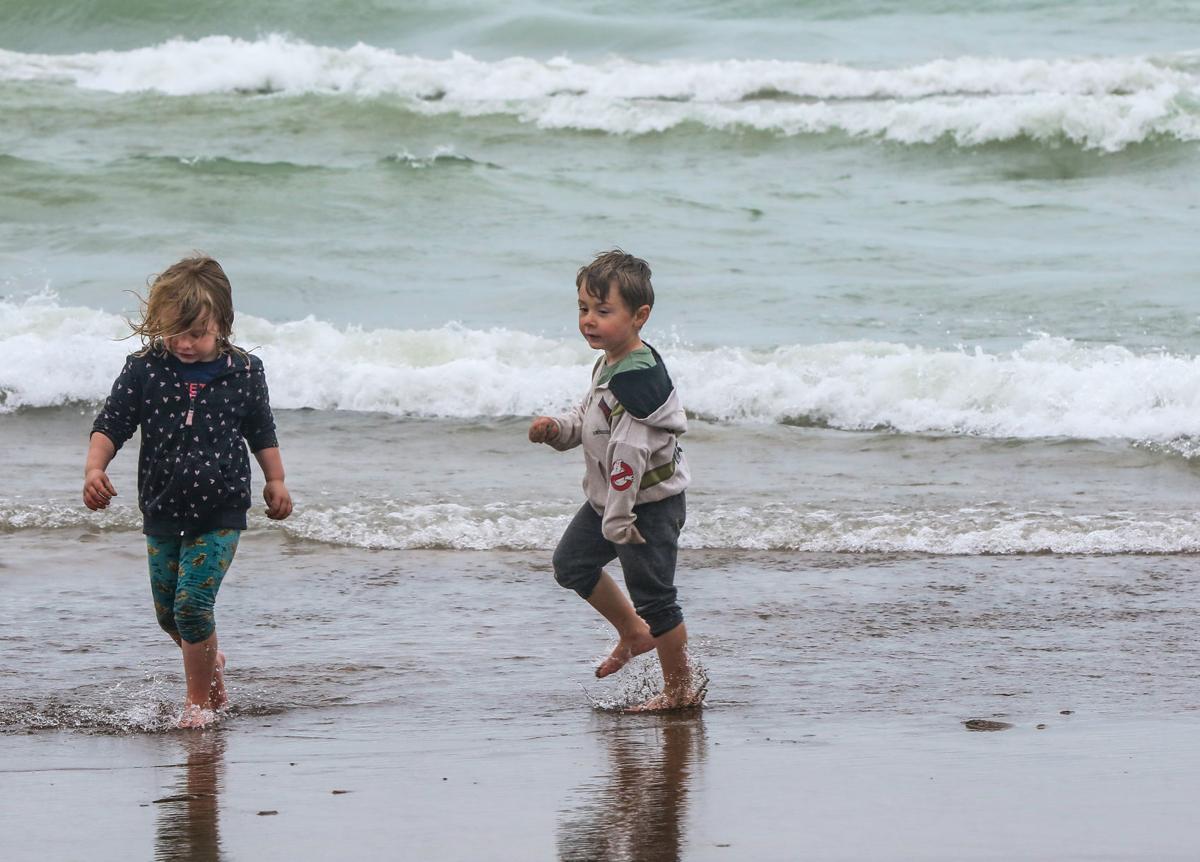 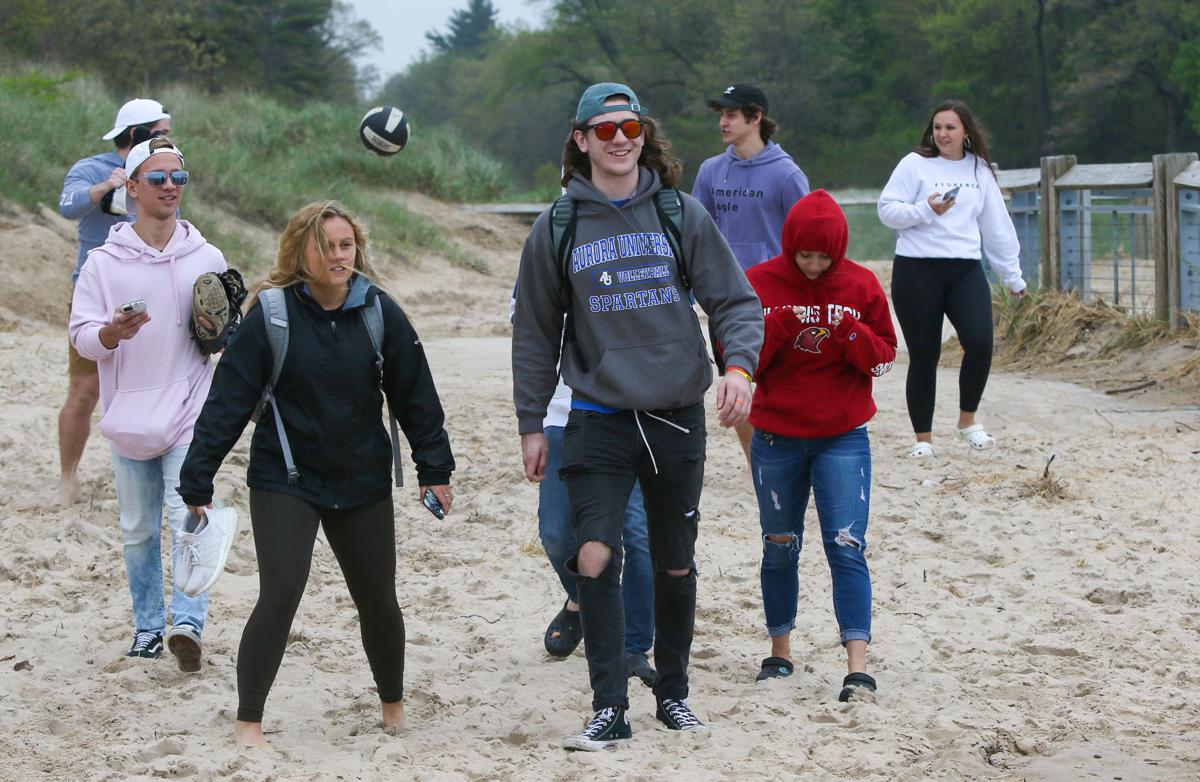 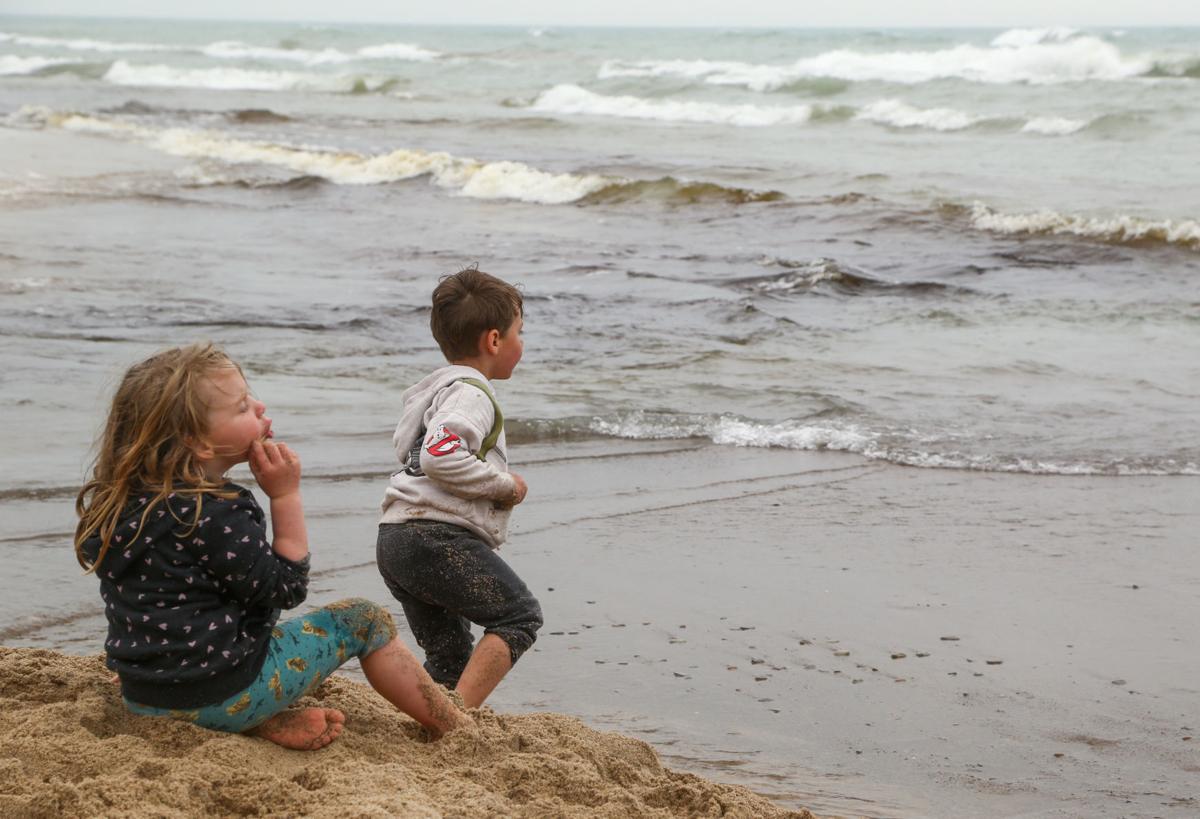 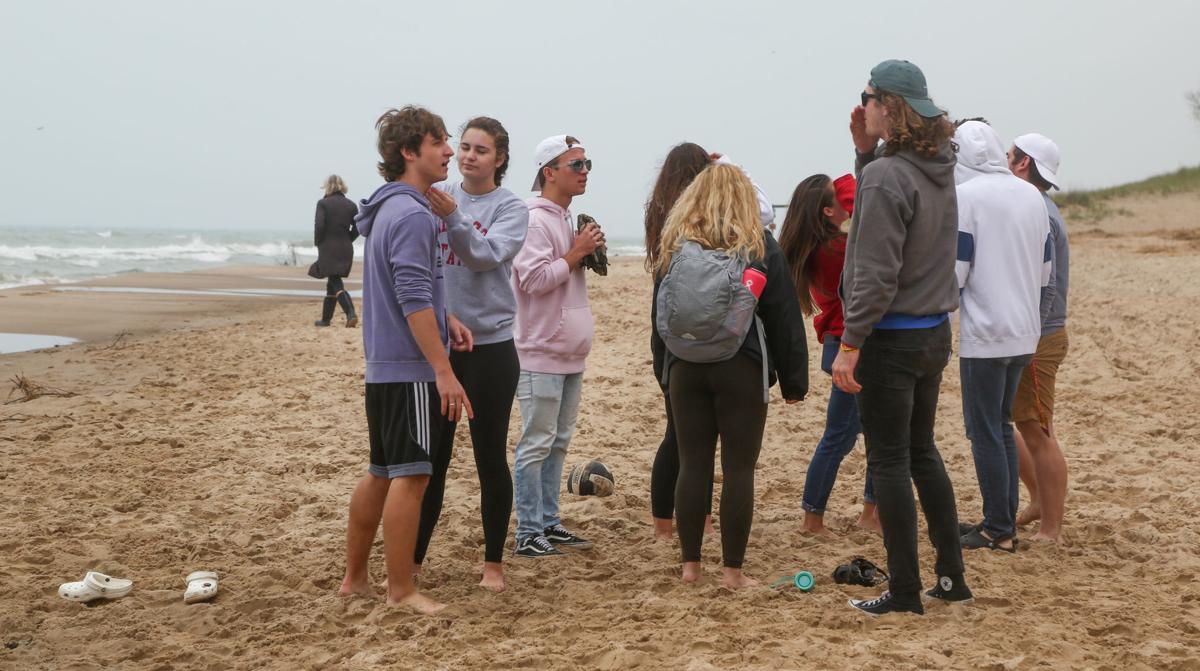 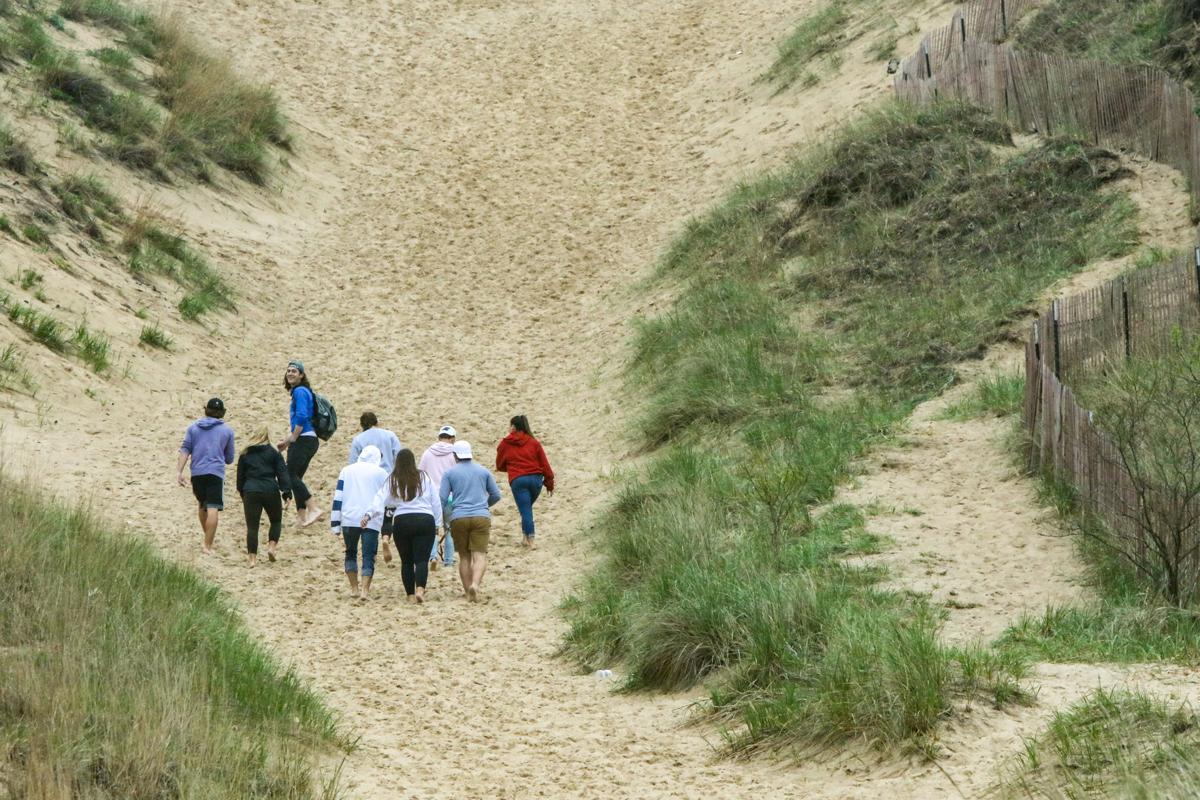 A group of high school and college students from Plainfield, Illinois, climb a dune Tuesday at the Indiana Dunes National Park. 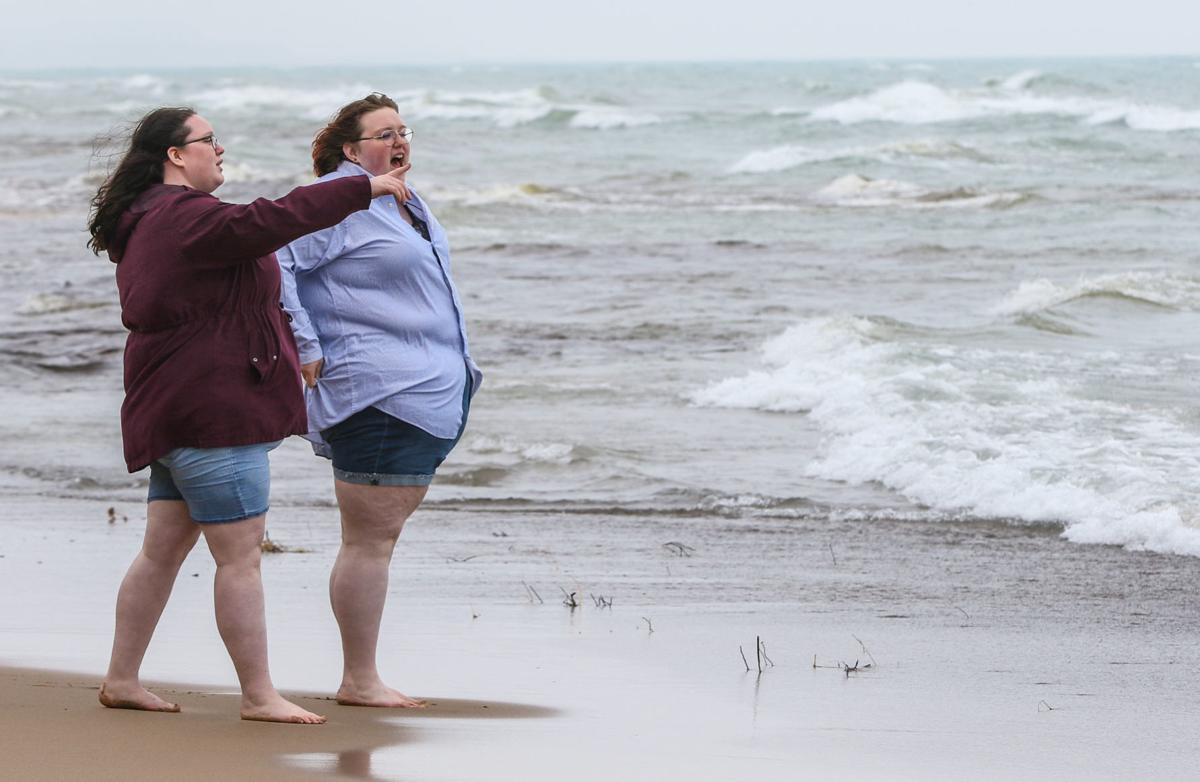 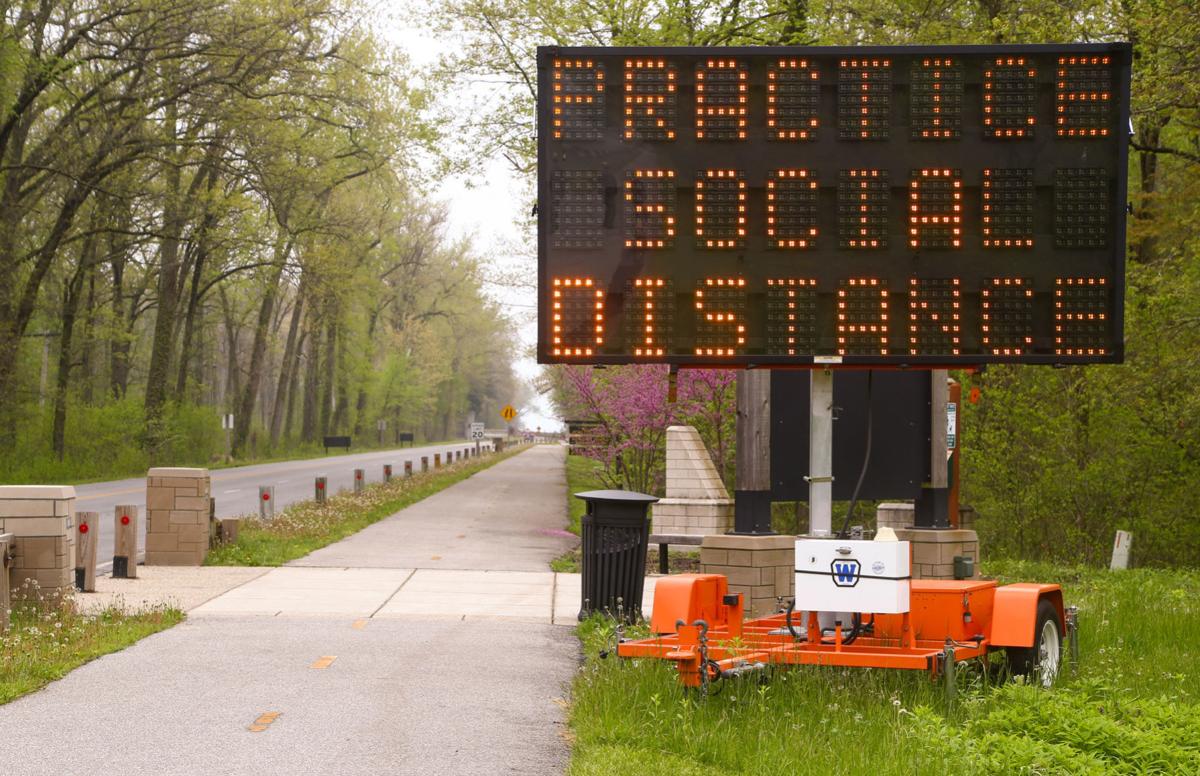 Visitors to the Indiana Dunes National Park are encouraged to practice social distancing. 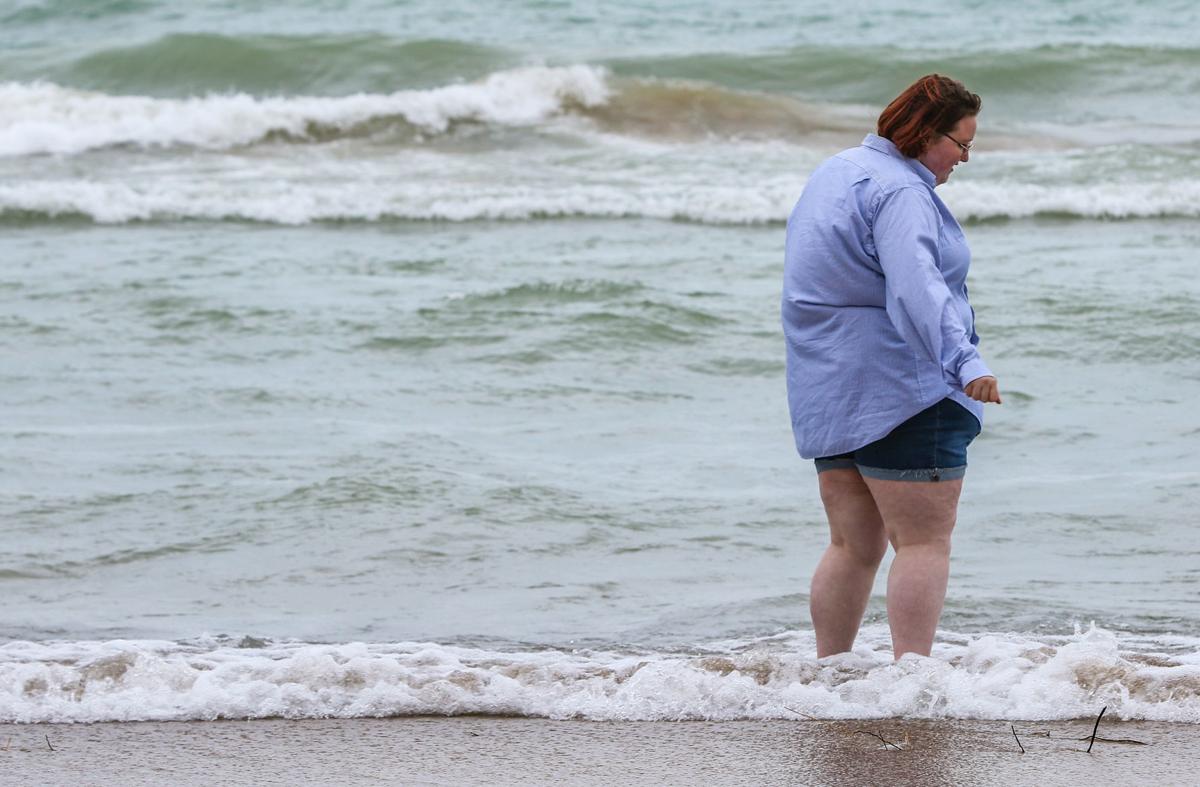 Madeline Krill of Bluffton wades in the waters of Lake Michigan Tuesday at the Indiana Dunes National Park Beach.

PORTER — The Indiana Dunes National Park is reopening its portion of Porter Beach for the upcoming Memorial Day weekend after closing the site earlier this month due to overcrowding and other conditions deemed unsafe during the ongoing COVID-19 pandemic.

"But the National Park Service and town authorities will be monitoring it for overcrowding (lack of social distancing) and dangerous conditions and will close it if needed to protect public health," Supervisory Park Ranger Bruce Rowe said.

"We are urging our visitors to stay safe by practicing social distancing on the beaches to protect their health and that of other visitors," Rowe said.

Similar precautions are urged at other public beaches along the local shoreline of Lake Michigan. But the coronavirus is not the only threat to the upcoming beach season.

A combination of high lake levels and strong northerly winds have battered the local southern shore of Lake Michigan this spring, eating away at the diminishing shoreline, and destroying or threatening roads, utilities, homes and other man-made structures.

When Mike Nastav, of the Whiting Parks and Recreation Department, was asked Tuesday if the city's beach will be open for Memorial Day, he said, "What's left of it."

There is only about 10 feet of beach left, he said, which is about a third of what was there at the same time last year.

The opening date is in keeping with the governor's statewide reopening plan, he said, following two months of limited activity and shutdowns aimed at helping control the spread of the potentially deadly coronavirus.

"If it does get out of hand, we'll close," he said of the anticipated public activity at the local beach. "Hopefully people have respect for others."

The city of Gary will also have its Lake Street and Marquette Park beaches open this weekend, said city Communications Director Michael Gonzalez.

"We're asking people to practice good social distancing techniques," he said. And to wear masks when appropriate, gather no more than 10 at a time and follow other federal safety guidelines, "at least for now," he said.

With erosion limiting beach access, Rowe said the national park is working on opening as many beaches as possible this summer.

"While national park beaches with smaller parking lots like Kemil, Mt. Baldy and Porter will be open, we expect them to fill early in the morning if the weather is nice," he said. "We recommend that visitors use the National Park's West Beach (in Portage) or the State Park (near Chesterton) if they are coming to the dunes. Both have huge parking lots, bathhouses, concessions and lifeguards."

Rowe said the national park will be rolling out an information phone line this coming weekend to guide visitors to available beach parking.

Signs to West Beach from Ind. 49 are also being improved to better direct visitors, he said.

+15 WATCH NOW: Meat industry butchered by COVID-19 in the Midwest

The town of Porter issued a statement Tuesday morning that its town council agreed to keep the community's beach parking lot closed. The town's portion of beach and parking lot would reopen when that move is taken by the national park.

The town also announced it has canceled Monday's annual Memorial Day service and other summer events due to the ongoing COVID-19 pandemic.

The return of the bus service is part of a wider effort by the city and state to reawaken the economy that has been largely shut down the last couple of months by health concerns and a stay-at-home order.

Under the guidelines, table games will be limited to three players, poker and pai gow rooms will be closed and smoking will only be allowed in designated areas.

Valpo Parks going ahead with adult, youth sports leagues; precautions in the works

"We're working on specifics at this point as far as game play," said Dan Lukes, adult recreation director for the Valparaiso Parks and Recreation Department.

Nine sex abuse lawsuits were filed Tuesday in New York against three Boy Scout local councils, signaling an escalation of efforts to pressure councils nationwide to pay a big share of an eventual settlement in the Scouts’ bankruptcy proceedings.

The back-to-work order has been given for Porter County employees beginning next Tuesday.

With masks and testing, Notre Dame plans to reopen in August

Notre Dame officials announced the school’s campus will reopen to students on Aug. 10, with social distancing, a mask requirement, testing and contact tracing to prevent the spread of the coronavirus.

Each Ivy Tech Lake County campus graduate will receive a mortarboard and tassel, courtesy of the college.

The program is expected to reimburse families for meals their children would have received had schools not closed this spring due to the novel coronavirus outbreak.

For working-class students who defied the odds to get a college education, it’s hard to be optimistic about the future.

"I promised them that she was alive and doing ok, but that I needed them to stay in my vehicle until I returned," Portage Police Sgt. Troy Williams wrote in his report.

Officials from the Indiana Dunes National Park said most parking lots were filled by 12:30 p.m. on Sunday, and Gary officials reported large crowds at the city's beaches.

April Sokolova, of Schererville, escorts her 4-year-old triplets Corrina, Lydia and Helena to the beach at the Indiana Dunes National Park on Tuesday.

A group of high school and college students from Plainfield, Illinois, climb a dune Tuesday at the Indiana Dunes National Park.

Visitors to the Indiana Dunes National Park are encouraged to practice social distancing.

Madeline Krill of Bluffton wades in the waters of Lake Michigan Tuesday at the Indiana Dunes National Park Beach.