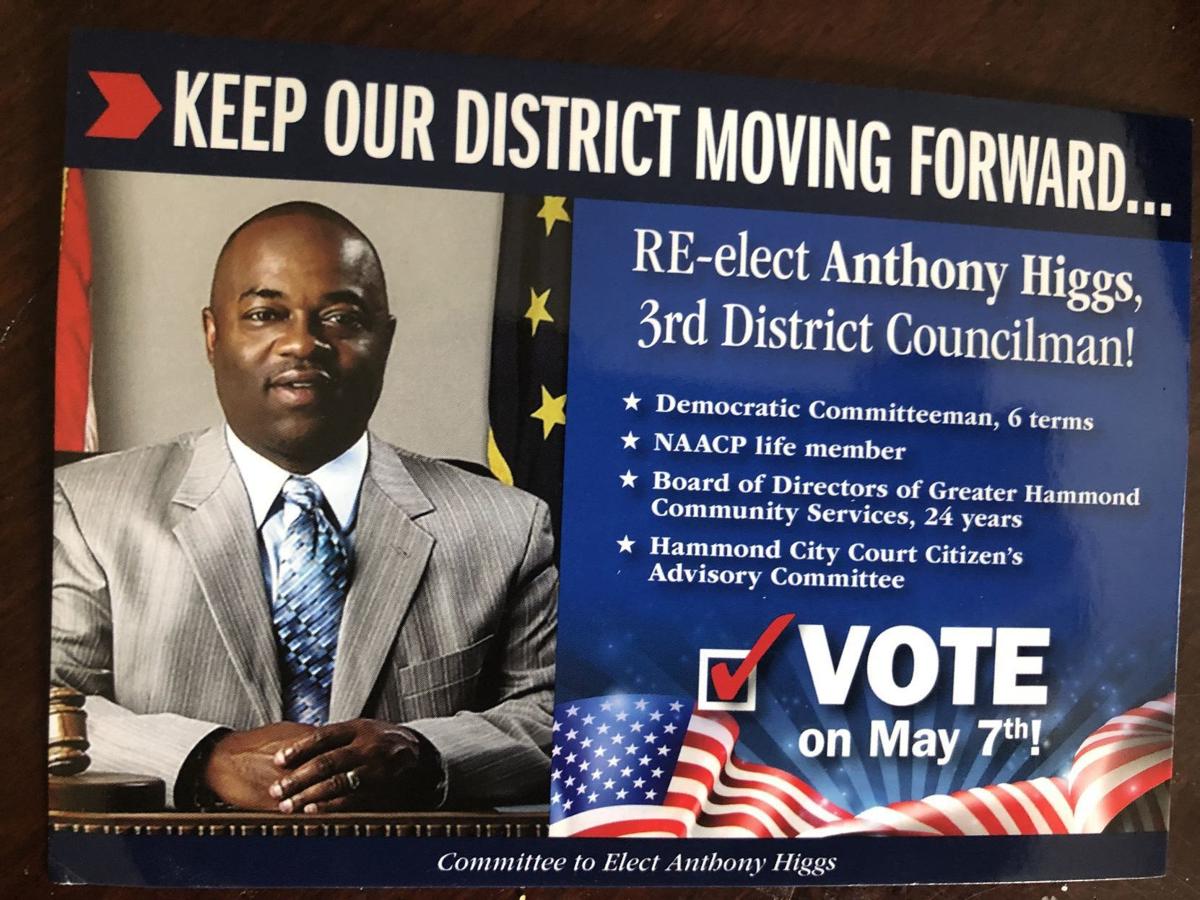 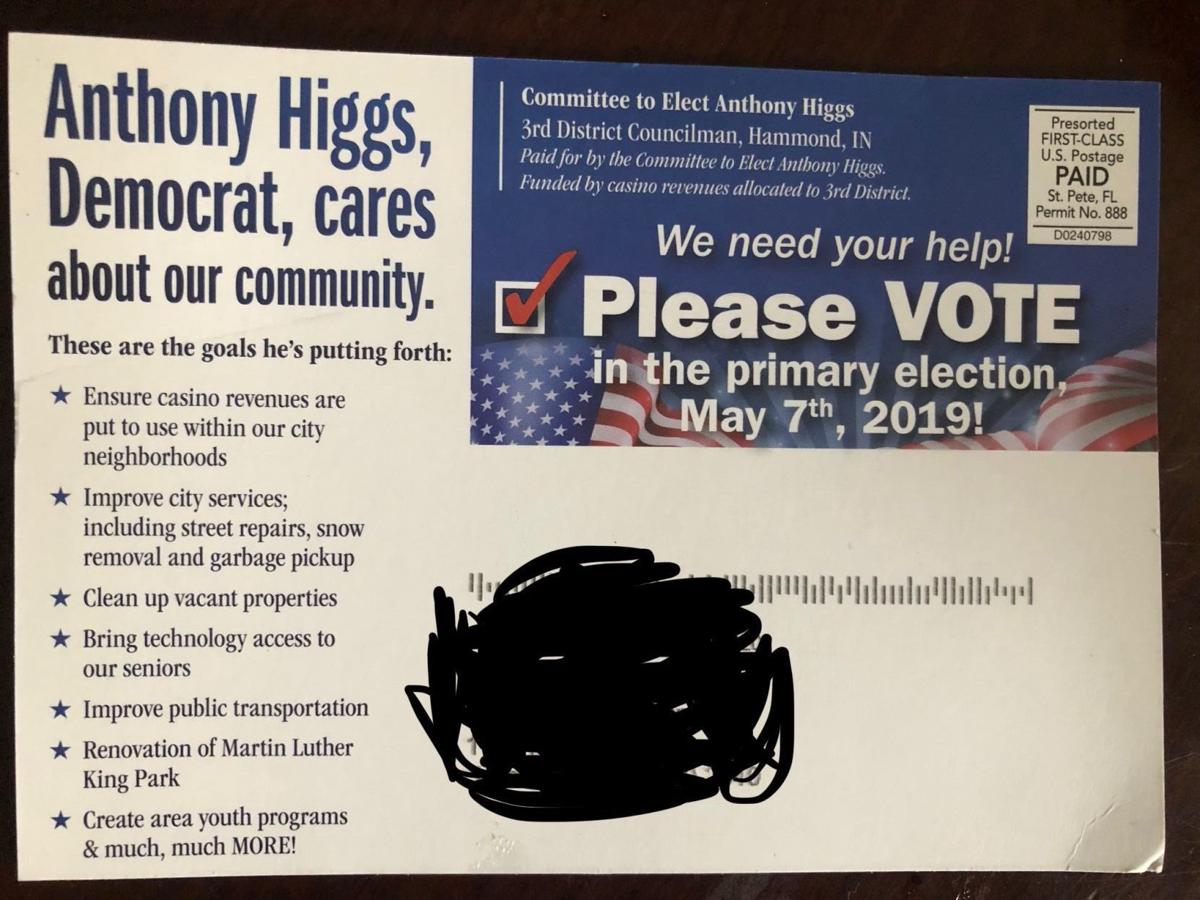 A postcard mailed by the Committee to Re-Elect Anthony Higgs contains a statement indicating it was paid for by casino revenues allotted to Hammond's Third District. The mailer is the subject of an election complaint by Higgs' primary opponent Barry Tyler Jr.

Hammond 3rd District Councilman Anthony Higgs is facing scrutiny from City Hall after one of his recent campaign mailers indicated it was paid for by casino revenues — a possible violation of the city’s gaming funds ordinance.

The mailer, a postcard delivered to Hammond residents on Monday, asks voters to re-elect Higgs by supporting him in the May 7 Democratic primary.

A disclaimer on the postcard indicates it was paid for by the Committee to Elect Anthony Higgs, the councilman’s official campaign organization. Another statement on the postcard further states it was “funded by casino revenues allocated to the 3rd District.”

Early Tuesday, Higgs’ primary opponent Barry Tyler Jr. filed a formal complaint with the Lake County Board of Elections, asking the board to look into whether the mailer is a violation of campaign finance law.

Tyler, who provided photos of the postcard to The Times, says it suggests Higgs thinks he is above the law after three terms in office.

“I would hope that the rest of the community would want someone who would abide by the law,” Tyler told The Times. “If this person can’t even run for office in a legal way, what is he doing while actually in office?”

Late Tuesday, after multiple attempts by The Times to reach him for comment, Higgs provided The Times with an invoice from a Florida-based print shop, PostcardMania, indicating he was quoted $1,739 for 3,229 postcards. Higgs says he paid for the cards and mailing service with his credit card.

According to a PostcardMania representative, Higgs requested that the phrase "funded by casino revenues allocated to the 3rd District" be part of a larger statement about the renovation of Martin Luther King Jr. park. The phrase was erroneously separated due to a miscommunication with a PostcardMania account manager, the representative said.

Reports of Higgs’ mailer reached Hammond City Hall as Tyler was filing his complaint Tuesday morning. Hammond Mayor Thomas McDermott Jr. said his administration began looking into possible misuse of public funds by the Higgs campaign after Higgs did not respond to roughly 10 attempts to reach him about the issue.

Tyler’s complaint comes on the same day as allegations of aggressive and threatening behavior by Higgs against Tyler supporters earlier this month. In a separate formal complaint filed with the Lake County elections board Tuesday, the Hammond Firefighters Political Action Committee alleged Higgs harassed its members while they were canvassing for Tyler on April 13.

The complaint, filed by Firefighters PAC Chairman Michael Hull, is based on reports from four PAC members who were talking to residents on the 800 block of Becker Street that day.

“While speaking with a resident, current Councilman Anthony Higgs allegedly pulled up in a vehicle and began yelling at the members to ‘get the f--- off the property,’” Hull wrote in his complaint. “In addition, he reportedly also accused them of ‘kicking down’ and ‘stealing his yard signs.'”

The PAC members continued down the block, but Higgs followed the group and continued yelling at them, the complaint alleges.

“Councilman Higgs was stated to have approached them again in his vehicle, and reportedly said ‘at least I’m not a thief’ several times and also told the members ‘wait until the mayor wants to lay ya’ll off and you’ll need my vote’ before speeding off through a residential neighborhood,” Hull wrote.

The elections board has approved the placement of both complaints against Higgs on the agenda of its May 4 meeting, according to elections office Director Michelle Fajman.

Elements of Hull's complaint were backed by Tyler, who says campaign volunteers reported Higgs had told them to get off his property while they were speaking with a resident. Higgs had been following the volunteers around since they began canvassing earlier that morning, according to Tyler.

"He was screaming at us, accusing us of taking his signs down," Tyler said.

Tyler says Higgs continued to harass him and some of his supporters after they left the firefighters group and went to the house of one of his supporters later in the afternoon. He says Higgs arrived to again complain about the campaign signs and got into a "screaming match" with the supporter's mother.

According to Tyler, the supporter's mother asked Higgs to leave, but the councilman refused. That's when Tyler called Hammond police, he said.

Officers arrived at the scene to find Higgs "speaking loudly in the middle of the street arguing back and forth with the campaign workers," according to an incident narrative provided by Hammond police spokesman Lt. Steven Kellogg. Police separated Higgs from the group and no criminal charges were filed, according to the incident report.

Higgs refused to comment on the Firefighters PAC complaint or Tyler's allegations of aggressive behavior.

The confrontation with Tyler and his supporters is the latest of several incidents over the past year in which Higgs has been accused of erratic or threatening behavior. In the spring of 2018, Higgs claimed Hammond paramedics stole $200 when they responded to a medical call at his house, an accusation he later walked back.

In February, police confirmed they were looking into allegations by a Hammond councilwoman who accused Higgs of threatening other council members at a meeting.

"If people don't stop messing with me, someone gonna wind up dead," Higgs is alleged to have said.

The Times sent out questionnaires to each of the candidates on the ballot for the 2019 election in Northwest Indiana. Get to know the names yo…

HAMMOND —First-time candidate Barry Tyler Jr. always knew he would get involved in hometown politics, he was just waiting for the right time t…

MARC CHASE: Only voters can stop Higgs' litany of embarrassments

How many more times will the hard-working residents of Hammond's 3rd District allow their councilman to put his worst foot forward at their expense?

A postcard mailed by the Committee to Re-Elect Anthony Higgs contains a statement indicating it was paid for by casino revenues allotted to Hammond's Third District. The mailer is the subject of an election complaint by Higgs' primary opponent Barry Tyler Jr.