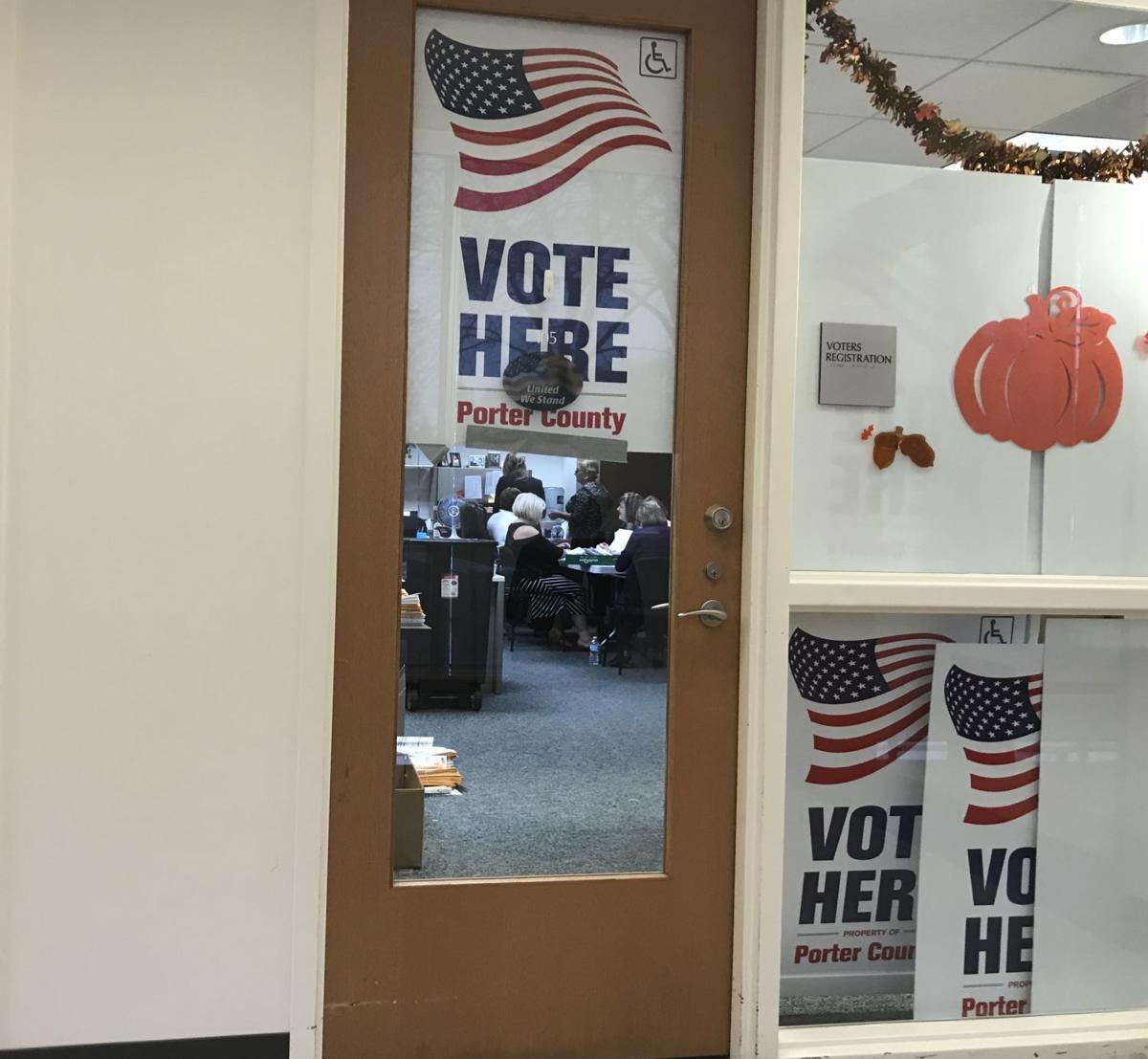 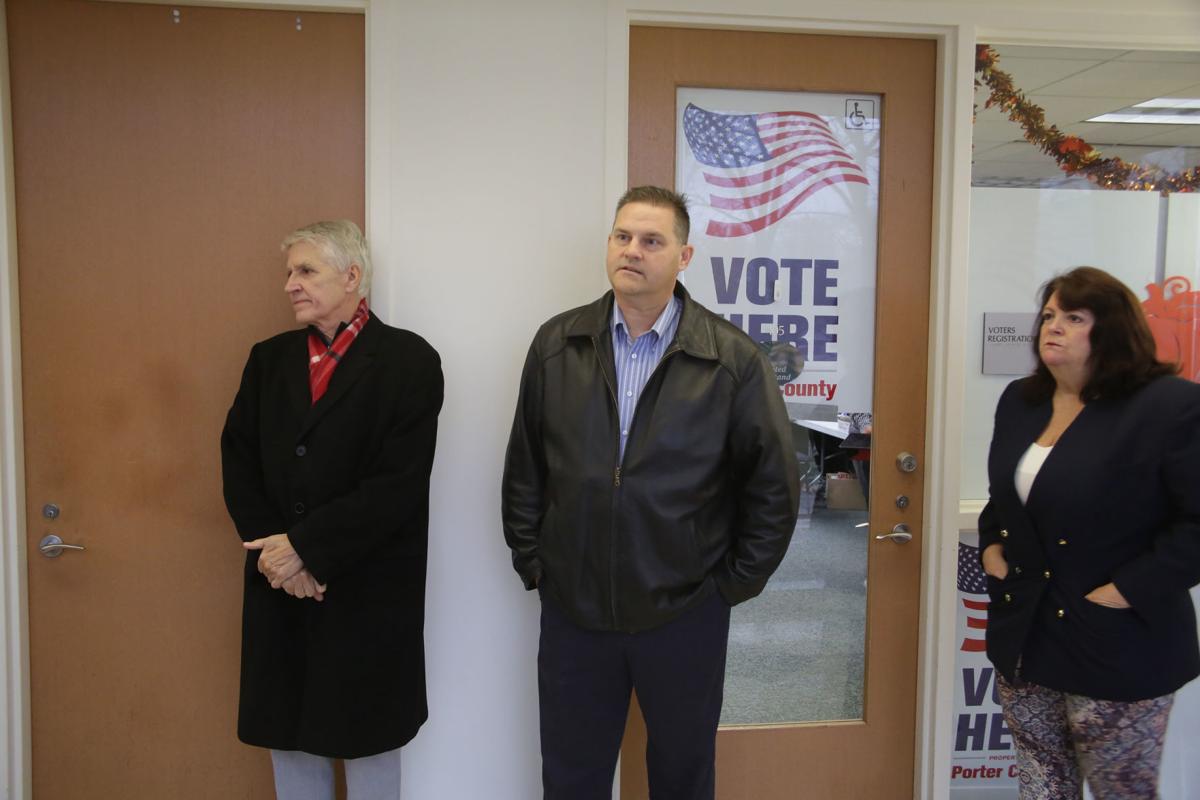 Porter County Election Board members J. J. Stankiewicz, from left, David Bengs and Karen Martin speak during a news conference Thursday outside the voter registration office on the lower level of the Porter County Administration Center in Valparaiso.

VALPARAISO — In the end, there were sighs of relief, heated exchanges and words of disappointment as Porter County finally released the local results of Tuesday's general election around noon Friday.

Sweeney was among a sizable group that crowded into the narrow hallway just outside the county voter registration office Friday morning and waited more than two hours for word that the ballot counting was done, three days after Election Day.

The announcement came from the county election board, but missing was Republican member and Porter County Clerk Karen Martin, who has been held largely to blame for polling places opening late, a shortage of workers, mishandled ballots and the other problems that contributed to the delayed vote count.

"Karen Martin has to answer for herself," said J.J. Stankiewicz, the lone Democrat on the county election board.

The Porter County Board of Commissioners issued a prepared statement following the release of the election results that in part calls on Martin to immediately resign as clerk. Martin lost her bid this week to unseat Democratic Porter County Auditor Vicki Urbanik.

Porter County Council members Dan Whitten and Jeremy Rivas made the same request of Martin, saying they as council members were assured by Martin and the election board that they had the resources necessary to carry out the election.

Martin said Friday afternoon, "I will be finishing my term."

The commissioners are staying mum about a meeting they had Thursday with the FBI that was requested in the wake of "scores of alleged violations of Indiana election law submitted by poll workers, voters and the public."

The commissioners also want to see a bipartisan effort in the county to determine what actions must be taken to assure this type of election failure does not occur again.

"This cooperative and bipartisan effort is absolutely critical to begin the process of restoring voter confidence in our elections," according to the commissioners.

"That's got to be right up there near the top," he said.

The vote total released Friday is not the final figure. There are 250 provisional ballots to be sorted through on Nov. 16, which are ballots that are in question and are not guaranteed to make the final count.

The delay in the vote count appears to be the longest in the county's history, according to election officials.

Kathy Kozuszek, Democratic director at the Porter County Voter Registration Office, who helped to oversee the vote count, said she reached out weeks ago to state election officials and the American Civil Liberties Union in response to complaints from voters and other warning signs that something was going wrong with the election.

"I saw this coming," said Kozuszek, an 18-year election employee, who lost to Martin four years ago in a race for county clerk.

"I'm truly saddened by what happened here," she said.

Bengs defended the decision by himself and Martin earlier this year to move control of the elections from the their long-time home at the county voter registration office to Martin, as clerk.

The change, which was opposed by Stankiewicz, was the right thing to do under the law, Bengs said.

Sundae Schoon, the Republican director at voter registration office, defended the change, saying Martin said at the time she could handle running the election.

PORTAGE — The makeup of the Portage Township School board will be changing due to this week's election.

VALPARAISO — Gary Germann will return to the Porter County Prosecutor's office, a job he held from 1978 to 1982.

Officials: Porter County election director bailed on job before she was removed

VALPARAISO — In a December 2017 email, Kathy Kozuszek told officials running elections was "not our job."

Indiana voter turnout for midterm elections was highest since 1994

INDIANAPOLIS — For the first time in nearly a quarter-century, a majority of registered Hoosier voters cast a ballot in the midterm elections.

More than a dozen Democratic elected officials in Porter County are calling for the resignation of Porter County Election Board President J.J.…

An Indiana statute limiting the legal options for remedying polling place problems on Election Day risks disenfranchising thousands of Hoosier voters, according to a new lawsuit.

Porter County Election Board members J. J. Stankiewicz, from left, David Bengs and Karen Martin speak during a news conference Thursday outside the voter registration office on the lower level of the Porter County Administration Center in Valparaiso.