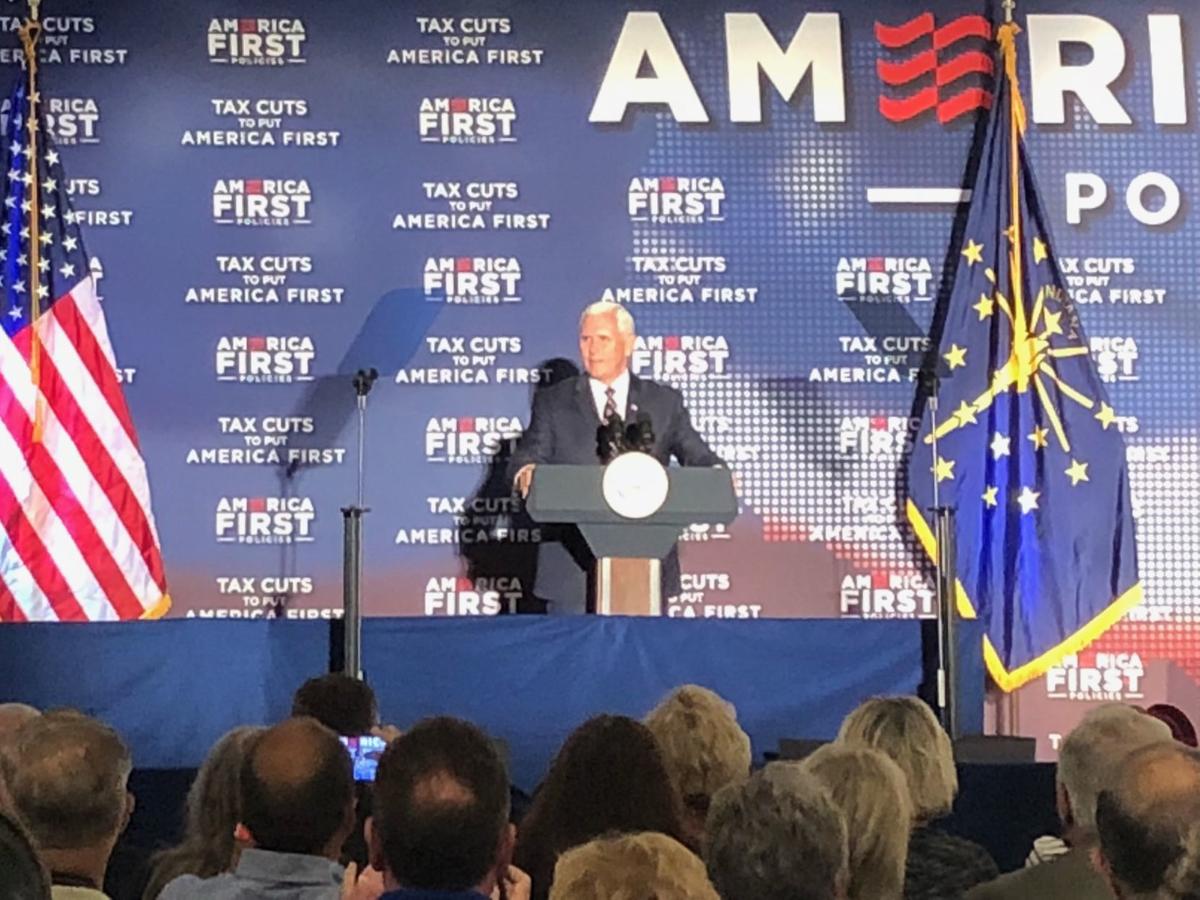 Vice President Mike Pence proclaimed Friday that the 2017 Tax Cuts and Jobs Act has created a booming economy in Indiana and throughout the nation. The former Indiana governor spoke at the downtown Indianapolis Marriott for an event sponsored by America First Policies. 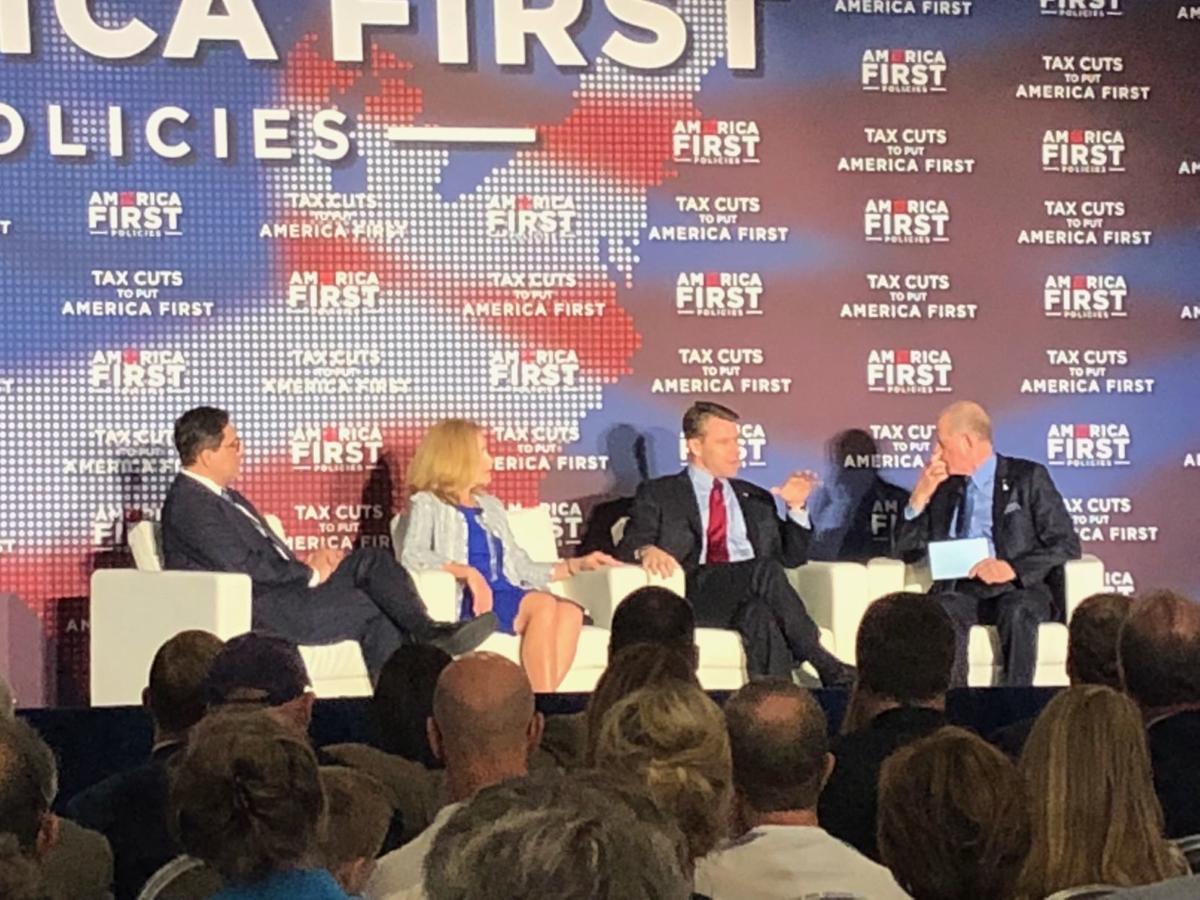 INDIANAPOLIS — Vice President Mike Pence returned Friday to Indiana to preach the benefits of the Tax Cuts and Jobs Act, and encourage some 500 Hoosiers to share the tax cut gospel with their family and friends before the November elections.

"When I was governor of the Hoosier State I was pretty proud of our record," Pence said at an event hosted by America First Policies. "But under President Trump, Indiana's economy is booming as never before."

The Republican gave most of the credit for that to the 2017 federal tax law that lowered business and individual income tax rates, streamlined tax credits and eliminated the tax penalty on Americans who fail to purchase health insurance.

"The truth is, under President Donald Trump, here in Indiana and all across America, jobs are coming back, confidence is back, and as I stand before you today I'm proud to say: America is back," Pence said.

"And we're just getting started."

He condemned the vote against the tax law by U.S. Sen. Joe Donnelly, D-Ind., who is running for re-election this year against former state Rep. Mike Braun, R-Jasper.

The vice president said Indiana "deserves better" than Donnelly in the Senate, and instructed his Republican audience at the downtown Marriott, which is owned and operated by Merrillville's White Lodging, that they need to share the word.

"Tell the story of American renewal that's been the result of the president that you supported, the policies that you supported and the leaders in Washington, D.C., who stood by this president," Pence said. "Tell them what they don't hear on most cable news networks.

"Tell them that under President Donald Trump the forgotten men and women are forgotten no more."

Young proclaimed a similar message during a tax cuts roundtable that led into Pence's 34-minute address.

He noted that numerous Indiana companies, including Valparaiso's Family Express and Merrillville's Albanese Confectionery Group, have boosted wages or paid employee bonuses in an effort to share the benefits of the business tax reductions.

"Hoosiers already know that the (tax law) will cause our health care premiums to skyrocket and would explode the deficit, leading to massive cuts to Social Security, Medicare, and HIP 2.0," Zody said.

"It's another reminder that even from Washington, Mike Pence will find ways to harm our state with reckless policies."

"I'll make you promise: We will not rest, we will not relent, until we end this evil in our time and make our schools safe again," Pence said.

The vice president also visited Indiana National Guard troops, toured the Indianapolis Motor Speedway and participated in a Braun fundraiser during his six hours in the capital city.

INDIANAPOLIS — Former state Rep. Mike Braun, R-Jasper, is emphasizing his experience as a successful business owner in working to sell himself…

GARY — U.S. Sen. Todd Young, R-Indiana, announced Monday he is calling for a federal task force to examine the impact a lack of affordable hou…

INDIANAPOLIS — As Americans prepare to file their income tax returns prior to Tuesday's deadline, U.S. Sen. Todd Young, R-Ind., is touting the…

Sen. Donnelly stands by vote against tax law: 'It was wrong for Hoosiers'

INDIANAPOLIS — U.S. Sen. Joe Donnelly, D-Ind., has no regrets about voting against the 2017 Tax Cuts and Jobs Act, a "no" vote that Republican…

The Tax Cuts and Jobs Act, which passed the Republican-controlled U.S. House and Senate without a single Democratic vote, prompted very differ…

UPDATE: Hoosier lawmakers react to the passage of the 2017 Tax Cuts and Jobs Act

Members of Indiana's congressional delegation, and the state's political party chairmen, had a wide variety of reactions to approval of the fe…

Vice President Mike Pence proclaimed Friday that the 2017 Tax Cuts and Jobs Act has created a booming economy in Indiana and throughout the nation. The former Indiana governor spoke at the downtown Indianapolis Marriott for an event sponsored by America First Policies.