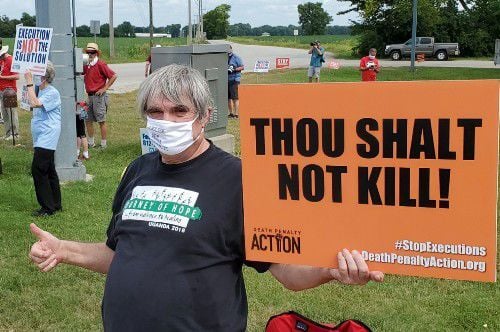 Bill Pelke, a former Region steelworker turned anti-death penalty activist following the 1985 murder of his grandmother in Gary, protests the resumption of executions this year outside the federal death chamber in Terre Haute, Indiana. Pelke died Thursday at his home in Alaska. He was 73. 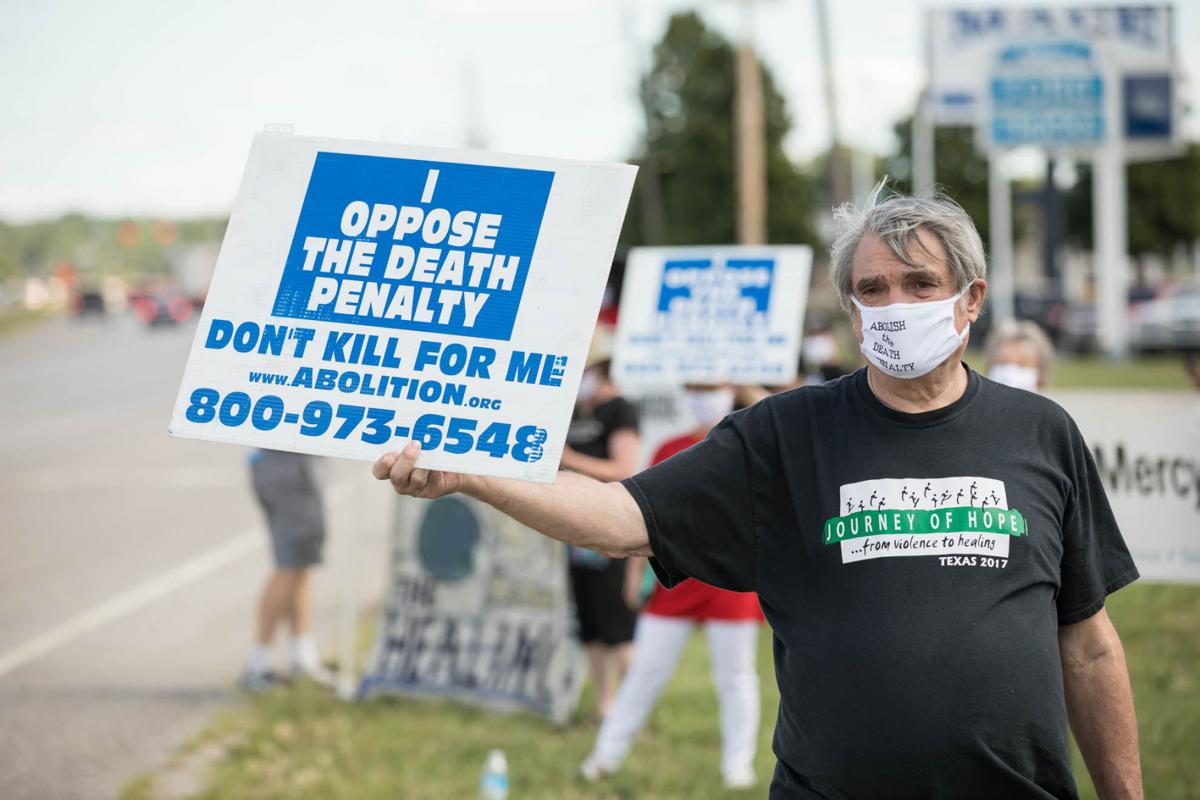 A leading Northwest Indiana advocate for abolition of the death penalty, spurred to action following the 1985 murder of his grandmother by four teenage girls in her Gary home, died Thursday at his home in Anchorage, Alaska.

His death was confirmed by Journey of Hope...From Violence to Healing, the organization Pelke founded to connect family members of murder victims.

Pelke was expected to travel back to Indiana this week to protest Thursday's scheduled execution at the federal prison in Terre Haute, according to Abraham Bonowitz, founder of Death Penalty Action.

The former Region steelworker made death penalty abolition his life's work after undergoing a spiritual transformation in 1986 while praying for love and compassion for Paula Cooper, the 15-year-old girl who repeatedly stabbed Pelke's 78-year-old grandmother to death.

Cooper was sentenced to death for killing Ruth Pelke and was the youngest death row inmate in the United States at the time.

The decision to sentence a child to die prompted international criticism and pleas for clemency, including from Pope John Paul II, and led Pelke to also advocate on Cooper's behalf.

In 1989, the Indiana Supreme Court ruled it unconstitutional to sentence a person younger than age 16 to death, and the high court commuted Cooper's sentence to 60 years in prison. Indiana law now requires offenders be 18 to be death penalty eligible.

According to Journey of Hope, Pelke fought for the right to visit Cooper in prison and corresponded with her over the years. He was devastated when Cooper died by suicide in 2015 shortly after being released on parole.

"There would be no Journey of Hope without Paula Cooper," Pelke said at the time.

Pelke told his and Cooper's story thousands of times in more than 40 states and 15 counties through Journey of Hope, and continued doing so this year notwithstanding the COVID-19 pandemic.

In June, Pelke traveled to Washington, D.C. to attend the 27th annual Fast and Vigil to Abolish the Death Penalty at the U.S. Supreme Court, a four-day event at which he's never missed a single day since co-founding it in 1994.

Pelke also protested at six of the seven lethal injections carried out this year in Terre Haute after Republican President Donald Trump ended the informal moratorium on federal executions.

During the seventh, Pelke was protesting at Congress and the Department of Justice.

"I will have more to say soon about Bill's incredible legacy of anti-death penalty activism and advocacy for murder victims' families, but for now my thoughts and prayers are with his family, friends and fellow activists. This is a profound loss for our movement," Prejean said.

Journey of Hope said a public remembrance ceremony for Pelke is being planned.

Bill Pelke and his Journey of Hope crossed my desk the other day.

Death row inmate at 16, later freed, she can't escape past

INDIANAPOLIS | She was determined to make good on her second chance, to become a profile of redemption. A death row inmate at 16, Paula Cooper…

Bill Pelke said he was “devastated” when he learned Paula Cooper had committed suicide in late May.

INDIANAPOLIS | The fatal shooting Tuesday of Paula Cooper, the Gary native who once was the youngest person in America sentenced to death, was…

Northwest Indiana and Beyond

In Sunday's Forum section, Sara Serritella, whose name was Sarah Tompkins before she was married and when she was a reporter for The Times, re…

INDIANAPOLIS | Paula Cooper, a Gary native who at age 16 was the youngest death row inmate in the United States before an international outcry…

Across the Midwest, the whiplash of closing, opening and facing more restrictions and more possible closings is taking its toll on scores of businesses that have managed to survive this year.

A man who was working on a renovation project at the university died of blunt force trauma after a crash on campus that was caused by someone who fled police while driving recklessly from Merrillville into Gary, officials said.

Anna Ortiz's Most Memorable Stories from 2020

Anna Ortiz's Most Memorable Stories from 2020

Bill Pelke, a former Region steelworker turned anti-death penalty activist following the 1985 murder of his grandmother in Gary, protests the resumption of executions this year outside the federal death chamber in Terre Haute, Indiana. Pelke died Thursday at his home in Alaska. He was 73.