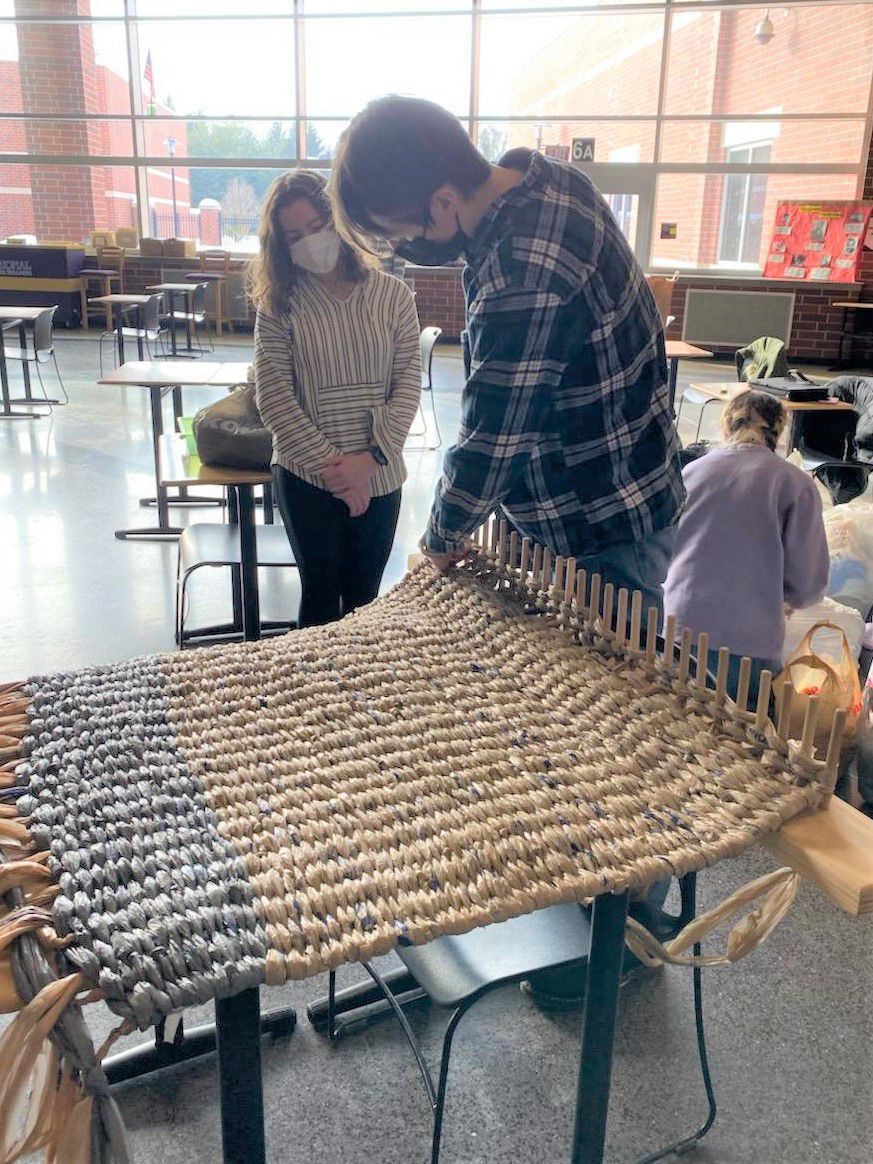 Elijah Puente, president of the Hobart High School Key Club, demonstrates for Alyssa Janik the loom weaving of plastic strips into sleeping mats for the homeless. It was one of numerous service projects by the HHS group that has won recognition for its community involvement. 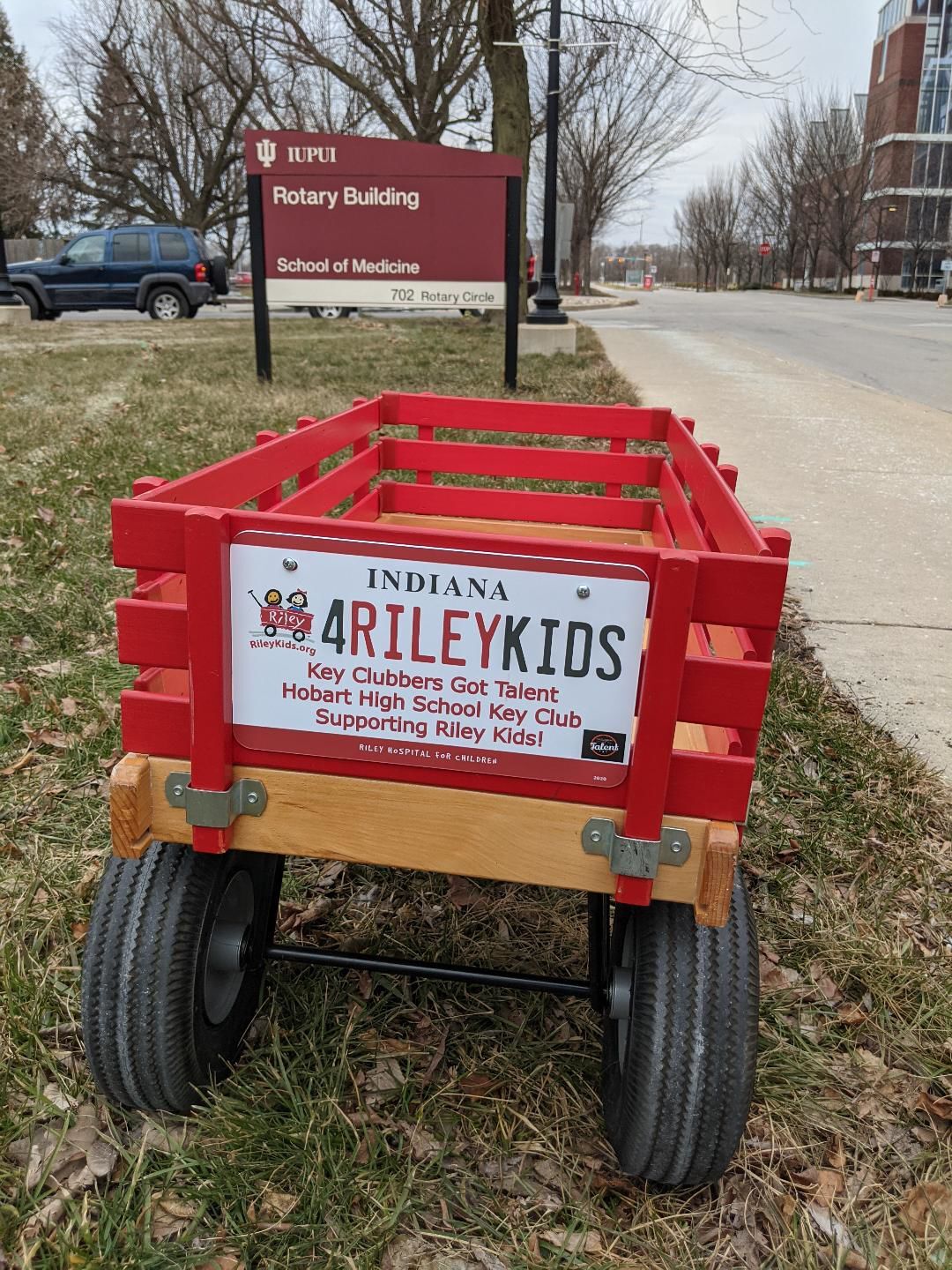 For its efforts for Riley Hospital for Children, the Key Club now has a personalized “Riley wagon” used to transport children around the facility.

At 60 active members, the HHS group was recognized internationally for Key Clubbers Got Talent, an eight-hour virtual talent show which aired Oct. 3, 2020. The show, a benefit for Riley Hospital for Children in Indianapolis, raised $8,600. It featured the talents of young people across Indiana, the U.S., and other countries, including Jamaica, Canada, Hungary, and Australia.

As Key Club moderator Heidi Polizotto explained, work on the show began last March, after which the HHS group learned that Riley definitely needed funds. The show featured 80 talent submissions, including youth who spoke about the treatment they received at Riley.

For its efforts for Riley, the Key Club now has a personalized “Riley wagon” used to transporting children around the facility.

As Jeydan Fifer, the Hobart group’s webmaster, said the international honor was the publishing and re-running of the talent show story for other groups to see and possibly emulate.

“They rarely do that for clubs at the international level,” Fifer, 17 and a junior, said. “I like the impact we can make – a very cool chain reaction.”

The Hobart young people were also cited for putting on a public speaking workshop.

“My mission is to turn these kids into future leaders,” Polizotto said, “and one key to leadership is public speaking.”

Key Club is all about service, and the Hobart group performed 1,300 hours of service between August 2019 and February 2020.

Projects included “kindness rocks,” rocks painted with positive messages, and collecting around neighborhoods with the Hobart Kiwanis for the Hobart Food Pantry; and also holding a peanut butter and jelly drive for the pantry.

Students also wove sleeping mats from plastic bags for the homeless. They held a Halloween trunk-or-treat for 300 youngsters and baked treats for local police, fire, and hospital staff.

Hobart has several members as state officers and hopes to have more elected to state positions at the Indiana Key Club convention Feb. 26-28 in Indianapolis. Up for nine state awards, the Hobart club is also responsible for running the virtual state gathering.

“The Hobart club goes above and beyond,” said Gianna Rodriguez, 16, the group’s secretary and a sophomore. “This allows us to have leadership positions and inspire others.”

Other honorees have included the Hobart Kiwanis, who founded the HHS group in 1997.

Indiana is home to 134 Key Clubs. The service group is also in 38 countries.

Polizotto said she was proud of the Key Club for taking on projects and completing them.

“As an adult,” Polizotto said, “I feel the future is in good hands. These kids are doing something amazing at every turn.”

Meghan reveals she had suicidal thoughts

“From the time Ray died until two weeks after that, we were just completely alone in our house, which was horrible. I was in a really bad place. It was a horrible little nightmare."

Police have identified the suspect as Keith Blake, 32, of Michigan City. Blake is being held at the Porter County Jail on preliminary charges of murder and being a felon in possession of a firearm.

According to police investigations, the suspect went with a group to McDonald's in Valparaiso after the fatal shooting.

Officials from the Department of Corrections said no foul play is suspected at this time.

Amazon on Wednesday announced the facilities will open at Georgia Street in the AmeriPlex at the Crossroads business park in Merrillville and at 2200 Memorial Parkway in Valparaiso.

Man robbed girl of her childhood by molesting, impregnating her, judge says

"It's just horrifying," Judge Natalie Bokota told a man during his sentencing hearing on one count of child molesting. "It is. You know that it is."

At least two taken to hospital, 1 extricated in crashes on Ind. 49 in Chesterton

The crashes caused traffic congestion late into Wednesday evening, with a portion of southbound Ind. 49 between County Road 1100 North to the Indiana Toll Road closed until 7:30 p.m.

The Indiana Department of Natural Resources began getting reports of dead waterfowl in the area around mid-February. Lab tests are being conducted to determine the cause of death.

"All events will be moved online, including student-led tours through the Office of Admission," the announcement said.

His disappearance was reported to the Merrillville Police Department and anyone with information on his whereabouts is asked to call the station at 219-577-7069 or 219-741-1406.

Elijah Puente, president of the Hobart High School Key Club, demonstrates for Alyssa Janik the loom weaving of plastic strips into sleeping mats for the homeless. It was one of numerous service projects by the HHS group that has won recognition for its community involvement.

For its efforts for Riley Hospital for Children, the Key Club now has a personalized “Riley wagon” used to transport children around the facility.