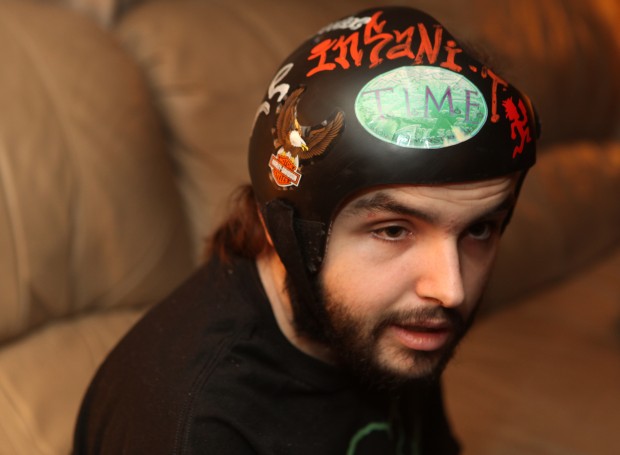 Dyer resident Josh Garza, who was shot Oct. 5, must wear a protective helmet until a piece of his skull is put back in place. There will be a fundraiser Sunday at Gino's Steakhouse in Dyer for the 19-year-old. 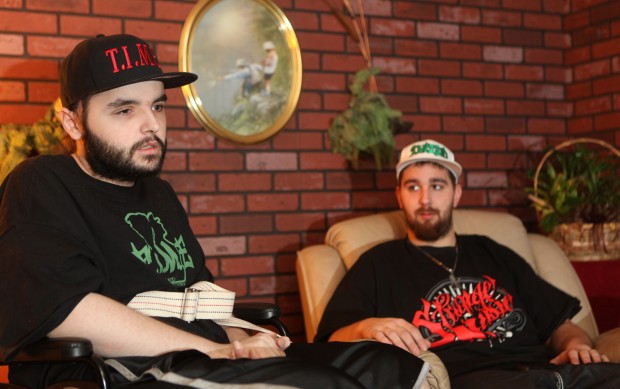 Josh Garza, left, and Matt Burton talk Saturday about surviving an attack by the Bistate Shooter on Oct. 5 near Beecher.
Susan Erler

DYER | Matt Burton watched in horror as first his best friend, Josh Garza, and then his co-worker Rolando Alonso were hit by gunfire.

"I heard another shot," Burton said. "I knew it was fired at me."

Burton and Garza survived the shooting by the man who later would be tagged the Bistate Shooter. Alonso, 45, of Hammond, died at the scene.

Burton and Garza talked for their first published interview Saturday at the Dyer home of Garza's mother, Karen Garza.

Josh Garza is recovering from a gunshot to the face. The bullet struck just above his right eye and remains embedded near the back of his head. He is able to walk with help and gets around in a wheelchair while continuing to undergo the rehabilitation he expects will have him back on his feet soon.

Garza, Burton and Alonso were rehabbing a fire-damaged house near Beecher, Ill., early Oct. 5 when a man approached with questions.

The disheveled man said he was looking for real estate and made small talk. Not unusual in the rehab business, where people often approach workers to inquire about a house under construction, said Burton, 20, who'd worked for some time for Rich Construction, the Dyer company handling the job.

However, something about the man didn't sit well with Garza, on his second day on the job at the work site. The man left, but quickly returned, this time seeming more agitated and peppering the workers with questions about plywood and other scrap from the work site.

"I had a really bad feeling," Garza said. He thought momentarily of using the hammer he held in his hand against the man, but he didn't.

The next thing Garza recalls is the gun pointed at him. He does not remember being shot.

"All of a sudden, I'm just on the ground," Garza said.

Burton's back was turned when the gunman opened fire. He saw Garza, who was pushing a wheelbarrow, drop to the ground.

"I saw the barrel being pointed at me," Burton said, "I thought, I can stand here and get shot or I can turn and run."

Running for his life, Burton sped through the house toward the outdoors.

"I looked behind me and saw Rolando fall against the wall," Burton said.

That's when he knew the next shots would be meant for him.

He raced to what seemed the only likely refuge, an unharvested cornfield. Tripped by a bush, he fell to the ground. It was then he saw the gunman's truck, a light blue Chevrolet Cheyenne.

"I looked at it up and down," memorizing details he knew he would need later. "I thought if this is the person who just shot my best friend, I want every possible bit of information."

Bullet after bullet zinged past him, but miraculously missed, given Burton's 6-foot-3-inch frame and the bright red shirt wore.

Flat on the ground in the cornfield, Burton reached for the cell phone he'd only recently bought and desperately he scrolled for the keypad. Halfway through his call to 911 the phone died.

Meanwhile, the shooter climbed into the pickup -- painted a blue so pale it appeared to Burton to be white -- and he gunned the motor.

"I was afraid he was going to take that truck and try and take me out, but he didn't," Burton said. The shooter was gone by the time police arrived minutes later.

Investigator concluded that the shooter then drove south of Lowell, where he approached and then shot farmer Keith Dahl multiple times after asking about honeybees. Dahl, who was sitting in his own truck at the time, survived only after pretending to be dead while the shooter entered the cab of Dahl's truck and stole his wallet.

Months passed without a break in the case.

Then, on Dec. 11, Gary Amaya, 48, of Rankin, Ill., was shot and killed with his own gun while he attempted to rob an LA Tan salon in Orland Park. The intended victim, a customer of the salon, pleaded for his life, took Amaya's gun and used it against the would-be robber, police said.

Burton and Garza say they are relieved. Still, Burton said, he suffers almost constant anxiety from the incident.

"Fear just floods over me," he said.

He's lost confidence in his ability to judge people, he said. Early on, he'd believed Lynwood Police Officer Brian Dorian was the shooter.

Dorian, of Crete Township, was arrested by Will County Sheriff's investigators three days after the shootings. Will County prosecutors charged Dorian with Alonso's murder, but the charge was dropped four days later when investigators discovered evidence from his home computer that showed he was online at the time the crimes occurred.

DYER | A benefit for one of the bistate shooting victims is from noon to 8 p.m. today at Gino's Steakhouse, 1259 W. Joliet St., Dyer.

Josh Garza, 19, of Dyer, was one of three people shot Oct. 5. His co-worker Rolando Alonso, 45, of Hammond, was shot dead. Garza was struck in the eye, and he has undergone surgery to remove bullet fragments from his brain.

Mary Vasquez, manager of Gino's, said she hopes the benefit will help defray the cost of Garza's rehabilitation.

There will be performances by local musicians Pig Philosophy, Cochise Soulstar, old.wives.tales, Josh Tree, Mr. Shapeless, Gerhart, String Fever and T.I.M.E., the rap group of which Garza is part.

There is a $5 minimum donation at the door for the all-ages show, which will feature a Three Floyd's beer tasting, wine tasting, face painting, bake sale and free appetizers.

There also will be a 50/50 raffle and raffles for numerous big-ticket prizes.

Dyer resident Josh Garza, who was shot Oct. 5, must wear a protective helmet until a piece of his skull is put back in place. There will be a fundraiser Sunday at Gino's Steakhouse in Dyer for the 19-year-old.

Josh Garza, left, and Matt Burton talk Saturday about surviving an attack by the Bistate Shooter on Oct. 5 near Beecher.
© Copyright 2021 NWI Times, 601 W. 45th Ave. Munster, IN | Terms of Use | Privacy Policy
Powered by BLOX Content Management System from TownNews.com.
You don't have any notifications.