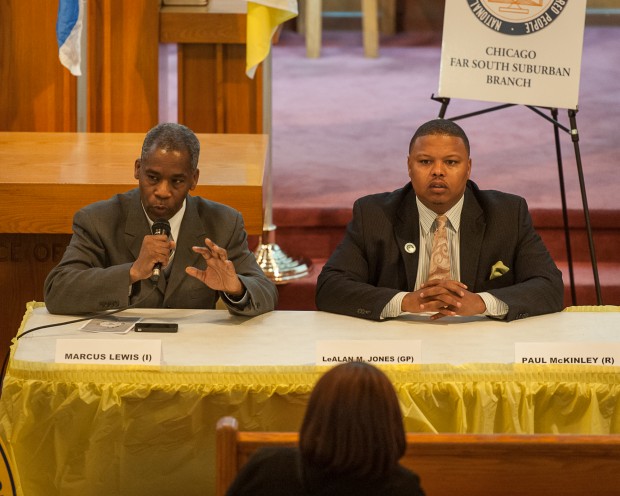 2nd Congressional District candidates Marcus Lewis, left, and LeAlan Jones participate in an NAACP forum Thursday in Chicago. The forum was open to all six candidates for Jesse Jackson Jr.'s former House seat, but only Lewis and Jones attended. 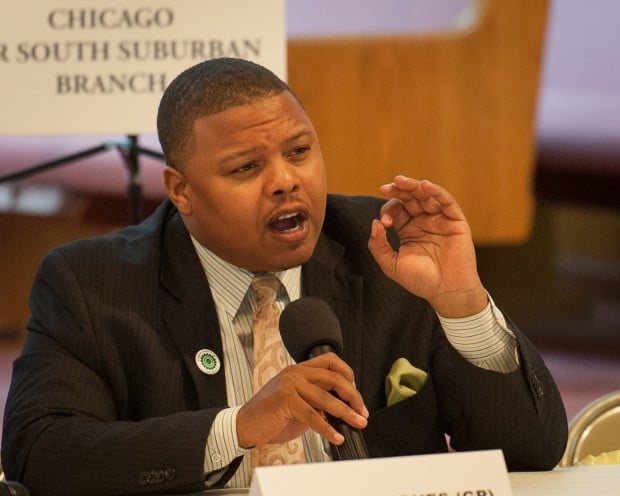 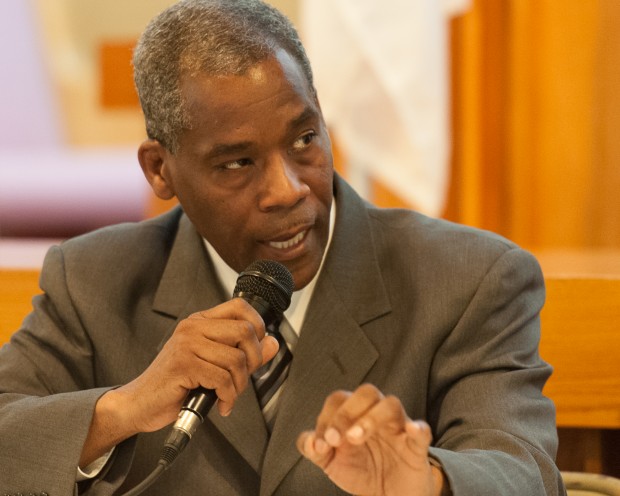 Marcus Lewis, an independent candidate for the 2nd Congressional District seat, speaks Thursday during a candidates' forum in Chicago.

Solve one, and you’ll probably solve the other, he said.

Lewis, an independent, and Green Party candidate LeAlan Jones participated Thursday in a forum organized by the South Side and south suburban chapters of the National Association for the Advancement of Colored People. The NAACP forum at the Sheldon Heights Church of Christ in the West Pullman neighborhood was open to all the candidates on the ballot for Tuesday’s election.

Democratic nominee Robin Kelly previously said she could not attend because she had planned to appear at a fundraiser Thursday in Chicago.

Lewis, who is employed by the U.S Postal Service, said his focus would be on job creation because lowering unemployment levels also would reduce violence and crime.

“We’ll go a long way to reducing guns when people get jobs,” Lewis said. “After eight or 10 hours of work, they’ll be too tired to shoot a gun.”

Jones said it was dishonest of her to do that, largely because if she gets elected to Congress, she will be in the minority party caucus and will not be able to get any of her talk passed into law.

“It’s a completely deceptive argument she made,” Jones said. “Our community is being used, and that is why Robin Kelly is not here right now.”

Lewis said he’d like to see something along the lines of the Works Progress Administration program of the Depression era to try to create work for unemployed people.

“We are in a depression in the black community right now,” he said.

Jones, a documentary filmmaker from the South Shore neighborhood, said he would distrust having government get involved in trying to create work for African-American people, because he said he thinks government is more interested in maintaining its own bureaucracy rather than creating work for people.

“African-Americans need to become more dependent on ourselves,” he said.

Jones said any reparations for black people as compensation for their ancestors once being enslaved should take the form of increased education benefits for African-Americans rather than actual cash payments.

Lewis said that white people would benefit if payments were made.

“You give black people $1 million and white people ought to support it, because within two weeks they will have it because the black people will have spent it,” he said.

Both candidates also were reluctant to offer support for gay rights or for making marriage open to gay couples.

“I don’t care” about the issue, Jones said.

Lewis said, “It feels like thumbing my nose in the face of God, who made Adam and Eve, and not Adam and Steve.”

In an emotional ceremony at a recent village board meeting, Lynwood honored the memory of a longtime officer by renaming its police training facility for him.

Christopher Gerstner, 47, was involved in a crash about midnight Sunday, according to the Cook County medical examiner's office.

The Calumet City Public Library, which was abruptly shut down earlier this month by Mayor Thaddeus Jones amid allegations of financial irregularities, will reopen next week, an official said.

Two former members of the Calumet City Public Library Board of Trustees say they saw no evidence of the "malfeasance" cited by Mayor Thaddeus Jones in his decision to close the facility indefinitely.

The National Weather Service issued a severe thunderstorm warning for LaPorte and Starke counties through 6:15 p.m.

A female Chicago police officer was shot multiple times Friday in the city's South Shore neighborhood. She and her partner self-transported to a nearby hospital, where she was listed in stable condition, police said.

2nd Congressional District candidates Marcus Lewis, left, and LeAlan Jones participate in an NAACP forum Thursday in Chicago. The forum was open to all six candidates for Jesse Jackson Jr.'s former House seat, but only Lewis and Jones attended.

Marcus Lewis, an independent candidate for the 2nd Congressional District seat, speaks Thursday during a candidates' forum in Chicago.