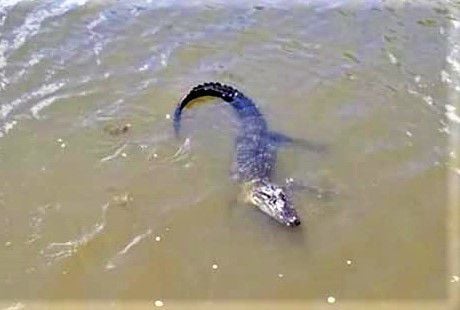 Lynwood resident Star Bryson captured a photo of the alligator outside her home and notified local officials.

Illinois Conservation Police search for an alligator in Lake Lynwood.

LYNWOOD — After an alligator was spotted in a Lynwood lake this week, agencies continue attempts to wrangle the wayward reptile.

A Lynwood resident, Bonita Wynn, said she was with her son Wednesday when she saw the alligator come up to the surface and then disappear under Lake Lynwood, NBC 5 Chicago reported.

As officials continue to scour the lake, residents have been advised to keep their distance from the water.

"We are currently working with professionals to try and catch the animal quickly and safely," the Lynwood Fire Department said on its Facebook page Thursday. "According to professionals and witnesses, the animal is about 3 feet long and not an immediate hazard to animals or humans. We also know that many homes have their backyards on shore of Lake Lynwood and may have concerns."

The Lynwood Fire Department said if someone sees the alligator, they should not try to approach it or capture it but instead call 911. In addition, pets and children should be kept away from the lake as a safety precaution.

Another Lynwood woman was outside of her home when she caught the alligator on camera. She posted the photo on social media and contacted local officials about what she saw.

Since the sighting, an expert hired by the Illinois Department of Natural Resources and Lynwood firefighters are searching for the alligator, according to NBC 5.

“Hopefully we capture it safely and humanely and we can get it somewhere it can live out the rest of its life,” Keenan Newton of the Lynwood Fire Department told NBC 5.

Floating cage traps have been set up with bait in hopes of catching the reptile. A drone has also been employed to search for the creature.

Beyond safety reasons, individuals are also asked to stay away from the lake to not spook the reptile.

"Traps have been set and baited," the Lynwood Fire Department said. "It is important for everyone to stay away from the Lake Lynwood shore line. As stated by the Illinois Conservation Police, a scared animal won't be hungry and won't go for the bait in the traps. They have very sensitive hearing and can feel vibrations of foot steps."

The Lynwood Police Department did not immediately respond to The Times’ inquiries for information.

Last year in July, Chance the Snapper took the spotlight when he swam the waters of the Humboldt Park lagoon in Chicago. Chance is now living at the St. Augustine Alligator Farm Zoological Park in St. Augustine, Florida.

Suspect shoots 3 officers who then shoot him, police say

A carjacking suspect being led into a Chicago police station on Thursday shot three officers, who returned fire and shot him, authorities said.

The girl said he "grabbed her in a hug and kissed her on the lips and stated 'do you like that?'" according to the incident report.

Family and friends of a man reported missing since early July are pleading for help with finding him.

Police are searching for Alexander Marshall, 22, of Gary, and Javonte Camell, 20, of Matteson, Illinois.

Drivers who are stopped at a checkpoint in Hammond will experience a brief delay if no violations are found, police said.

The alligator seen lurking in Lake Lynwood earlier this week was captured in the early hours of Friday, the Lynwood Fire Department announced.

One person drowned, and two others went missing Thursday at Lake Michigan beaches as high waves and strong currents ripped across the shoreline.

Six occupants were safely rescued from their boat after it capsized near the Hammond Marina late Friday.

Lynwood resident Star Bryson captured a photo of the alligator outside her home and notified local officials.

Illinois Conservation Police search for an alligator in Lake Lynwood.