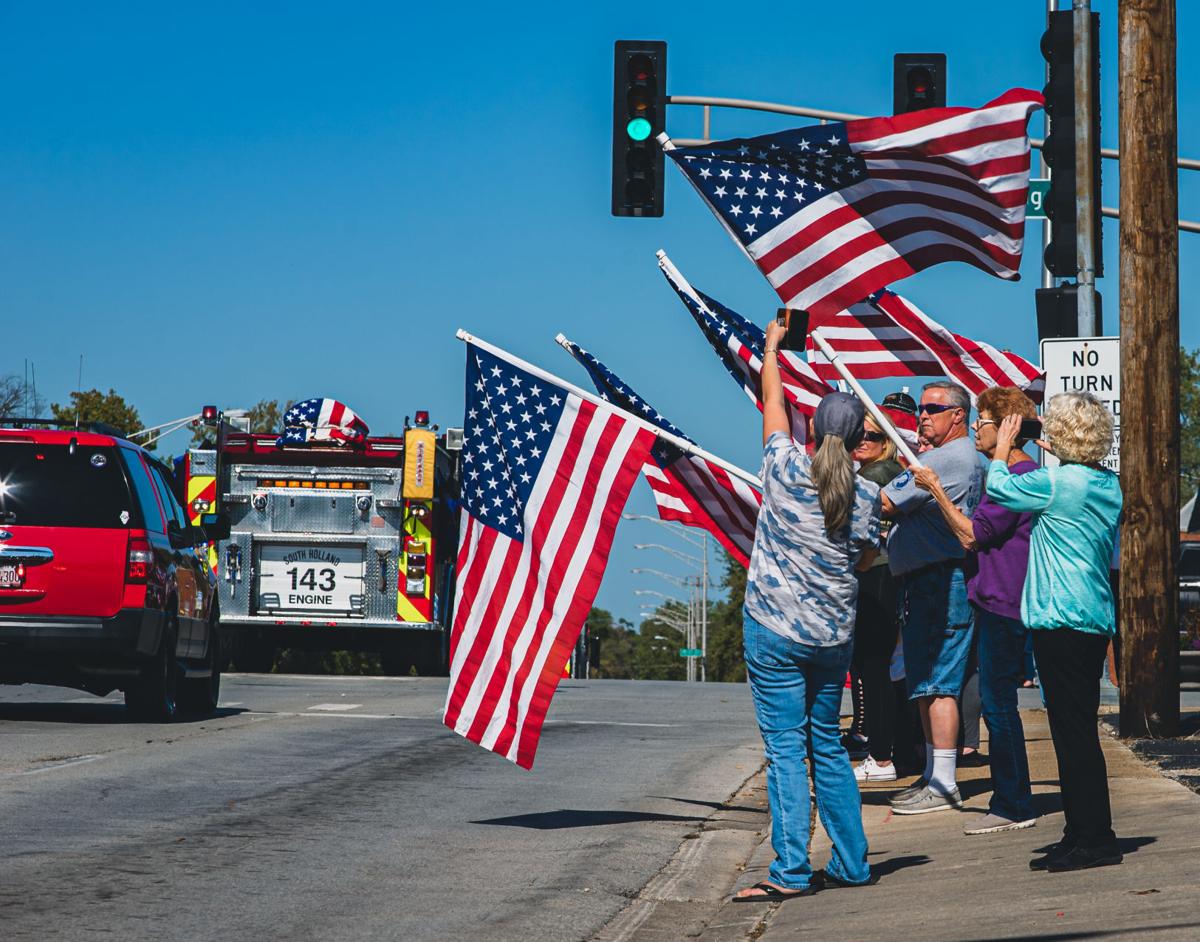 Spectators wave their American flags while watching the procession for fallen South Holland firefighter Dylan Cunningham on Wednesday afternoon as it passes on Burnham Avenue through Lansing. 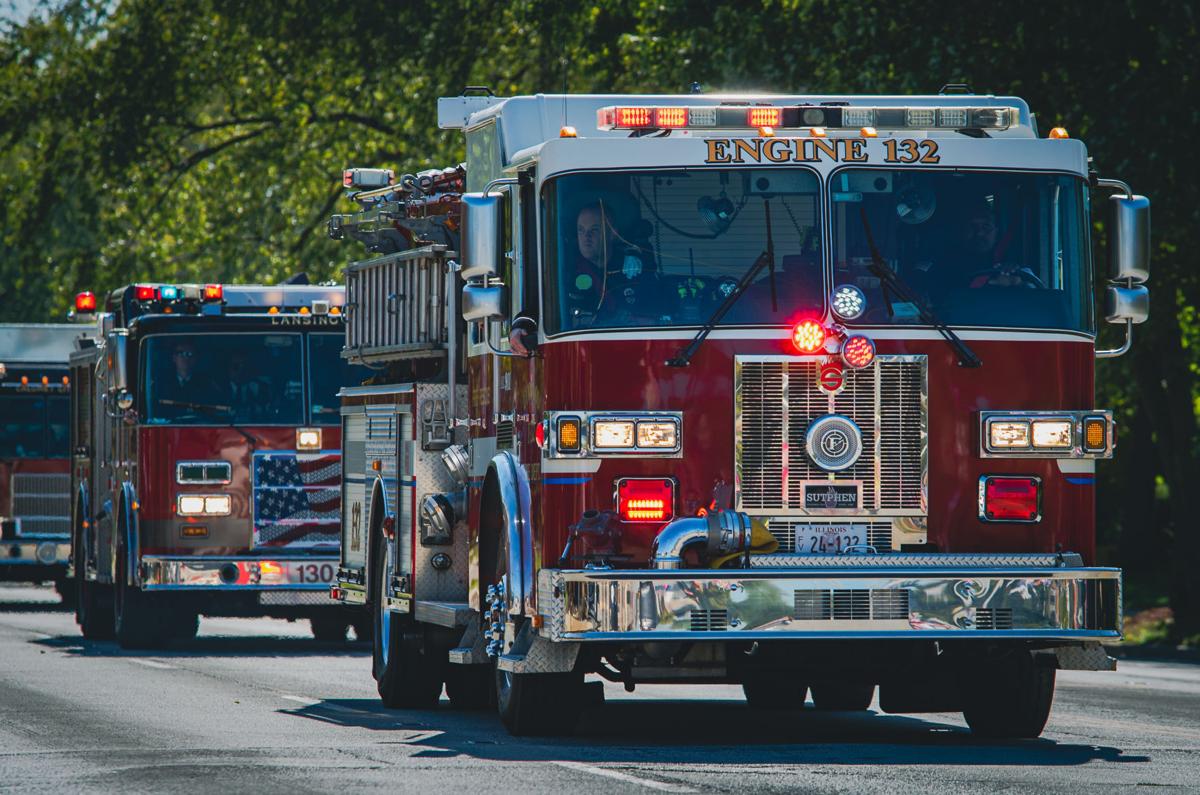 On Wednesday afternoon, members of neighboring fire departments drove their trucks down Burnham Avenue during the funeral procession for firefighter Dylan Cunningham. 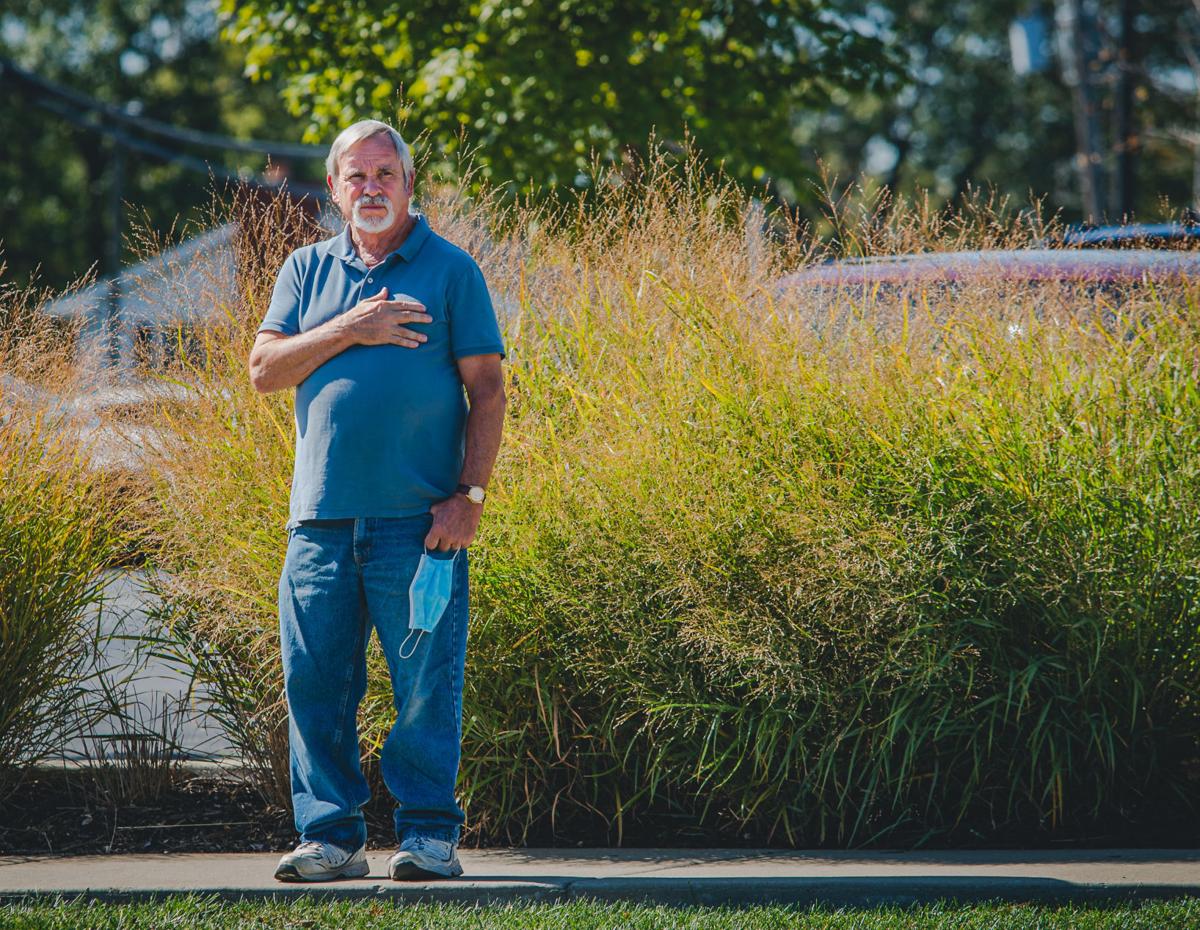 A local civilian honors South Holland firefighter, Dylan Cunningham, who died last week, by placing his hand over his heart during the funeral procession on Wednesday afternoon. 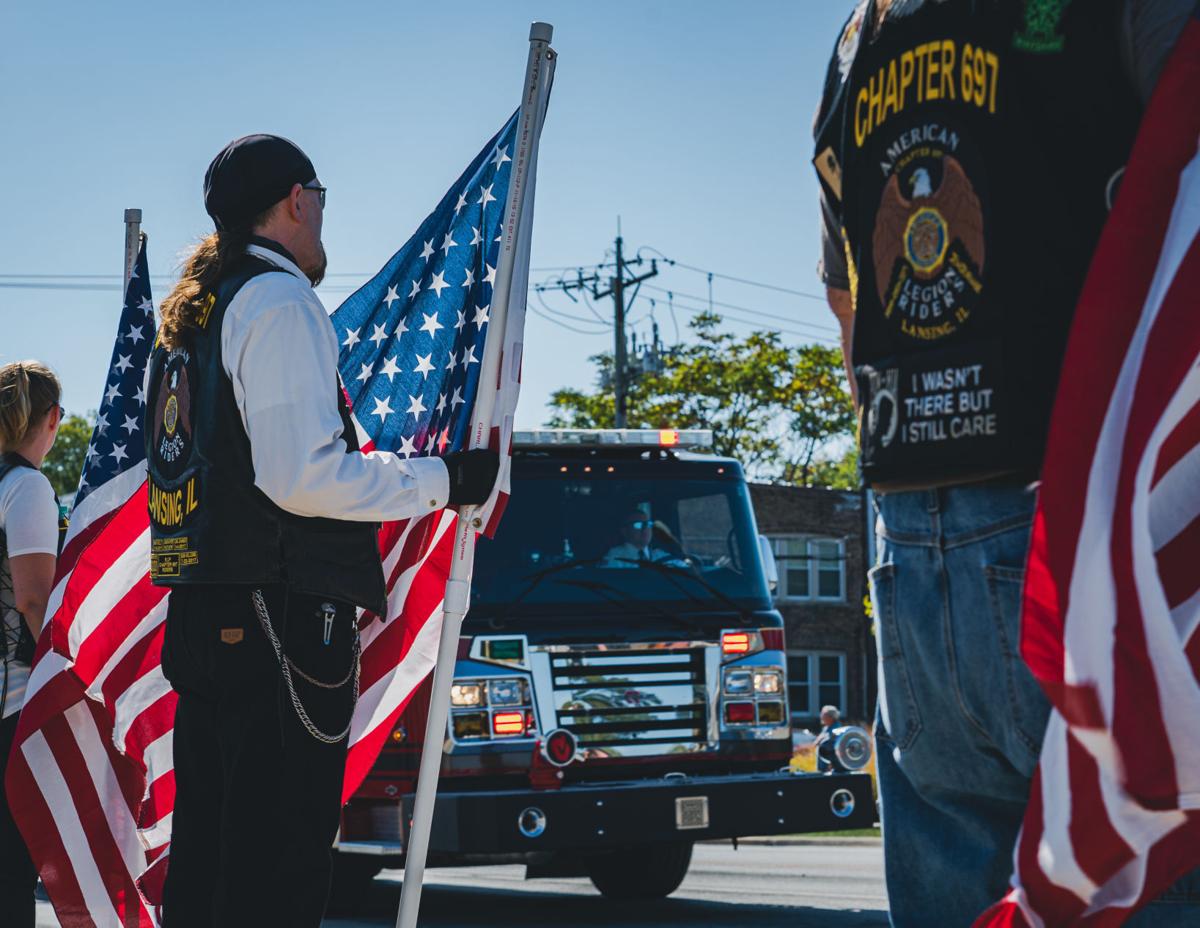 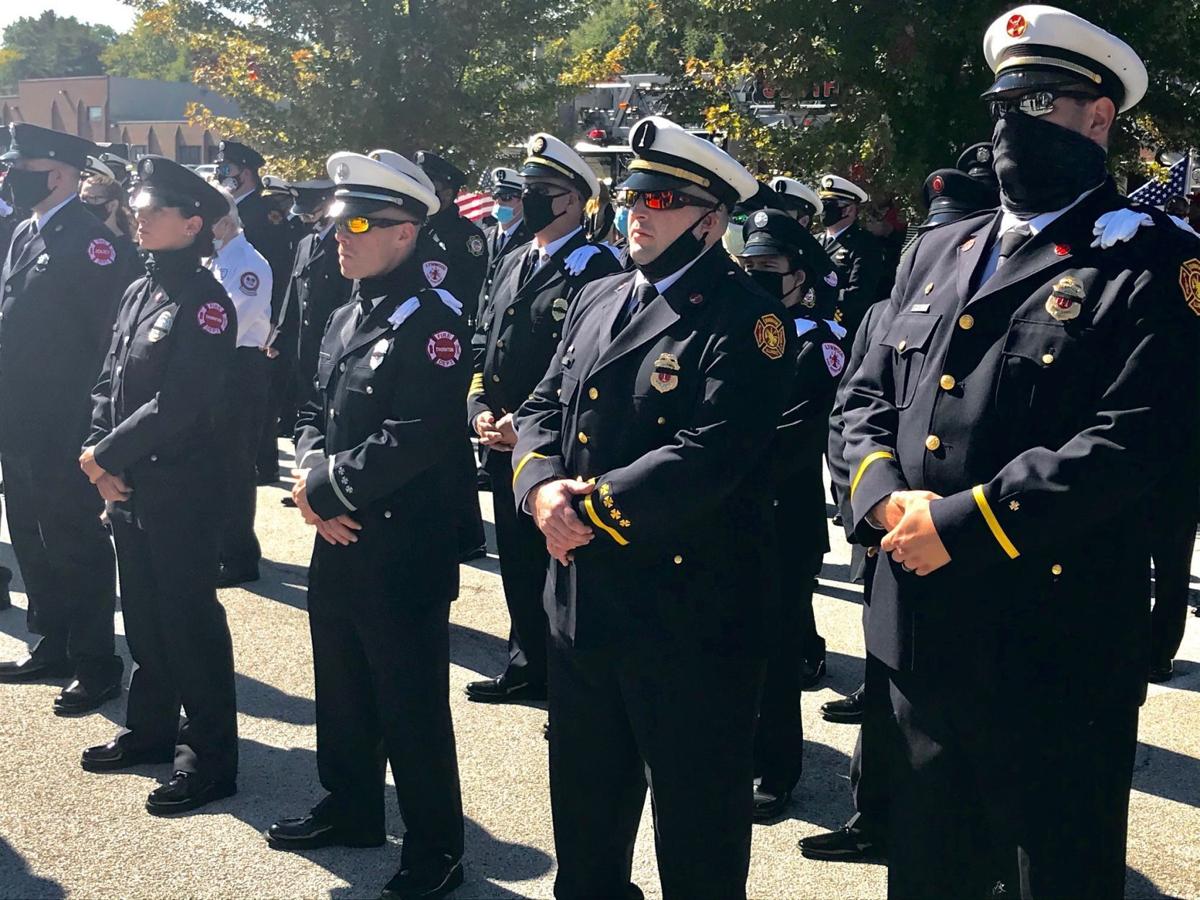 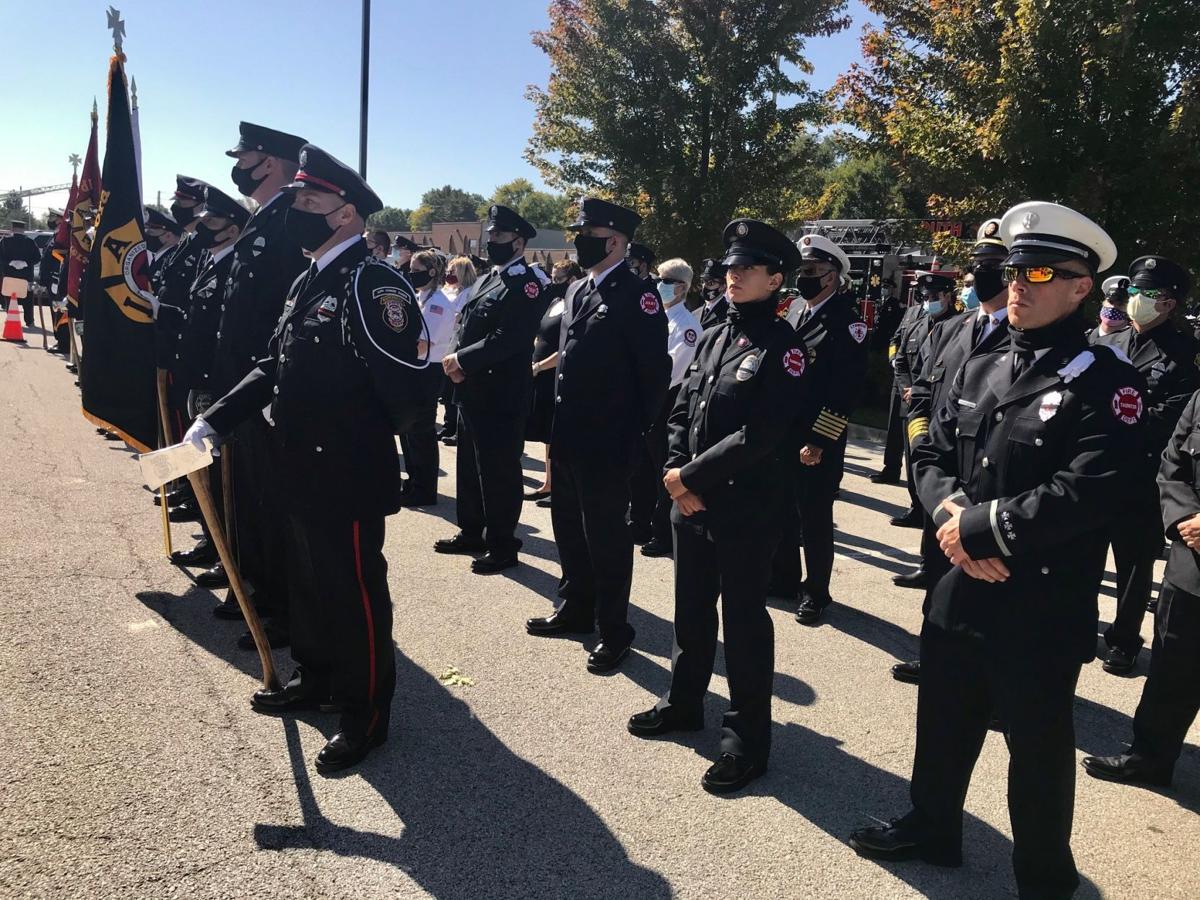 Public servants and first responders gathered Wednesday outside Smits Funeral Home in Dyer for the funeral service for Dylan Cunningham, a 29-year-old firefighter and paramedic who died last week during a training exercise.

DYER — Family, friends and first responders gathered Wednesday to honor the memory of Dylan Cunningham, a South Holland firefighter and paramedic who died while suffering a medical emergency during a training exercise.

A crowd of hundreds congregated at 11 a.m. at Smits Funeral Home, where they paid respects to Cunningham, 29, who died last week. Cunningham's family, fellow public servants, and public officials including the village mayor and fire chief, all paid tribute to his life and legacy.

For the South Holland Fire Department, Cunningham's death marks not only the loss of a dedicated public servant; it has also caused deep personal grief for many within the department, Fire Chief Brian Kolosh said.

"Growing up and living in a small town," he said, through a concerted effort at maintaining his composure, "you tend to know everyone. This is no exception. Dylan was not only a solid firefighter; he was part of the family."

That statement holds true for Kolosh in more than one way.

Kolosh said his son, Garrett, is best friends with Cunningham's younger brother, Cody. He described the young men as "three peas in a pod," adding "they were all like sons to me."

During Garrett Kolosh and Cunningham's preteen years, whenever Kolosh worried about the boys' whereabouts, he would be routinely comforted by the words, "Don't worry, Dylan is with us, Dad," he said. "And that was all I needed to hear."

Kolosh further described Cunningham as loyal, hard-working and dedicated member of the department, adding, "He died doing what he loved."

Cunningham, the son of Rosemary and Patrick Cunningham, died Sept. 30 during an underwater dive training exercise at Haigh Quarry Lake in Kankakee. He was pronounced dead at Northwestern Memorial Hospital in Chicago.

He had been with the South Holland Fire Department in a part-time role since 2011 and was sworn in full-time in 2018. He was also a paramedic, served in the Illinois Army National Guard, and was a member of the Associated Fire Fighters of Illinois (AFFI) Honor Guard Association and of the Mutual Aid Box Alarm System (MABAS) 24/27 Dive Team.

In October 2018, Cunningham received a Gold Seal from the South Cook County EMS medical director for his work in saving a patient on an EMS call.

By the end of his service, Cunningham had earned the rank of sergeant and had served in a chemical operations and infantry unit.

Cunningham graduated from Thornwood High School, where he was a multi-sport athlete. He earned a degree in fire science from Prairie State College, and then journeyed to Poland where he studied to become a chemical, biological, radiological and nuclear specialist for the Illinois National Guard.

Cunningham's love for sports, among many other attributes, are shared by his younger brother Cody, who said he has always followed his sibling's footsteps.

"I have always called (Dylan) my real-life superhero ... growing up, we shared everything," Cody said, adding in jest that while he surpassed his older brother in wrestling and pole vaulting, Cunningham proved nearly unbeatable when it came to swimming — a skill he later applied to his profession as a firefighter.

Courtney, the eldest of the siblings, called Cunningham her best friend and a role model, despite the fact that he was younger than her.

"Dylan taught me about love. He had a heart of gold. He showed me what hard work is," she said. "He was always present — something that so many of us struggle with — but not him. He loved life, and he knew how to enjoy it."

The rest of Cunningham's family remembered him as an active and youthful individual, an exemplar, and most of all, a hero.

Cunningham lived in Thornton with his fiancée, Laura Nye. The couple was expecting a baby boy, she said. Nye has since decided to add Cunningham as her surname.

When Nye Cunningham discovered in April that she was pregnant, she was terrified. But she recalled that Cunningham's enthusiasm about being a father helped her overcome that fear.

"I called him at work and said, 'You're having a son.' I have never seen him so excited or happy. All the guys at the station that day knew, just from hearing him screaming," she said.

The couple's child, whom they have named William Thomas Cunningham, is expected to be born in early December.

"Dylan is the most genuine person I have ever met in my entire life. He is just so real, so open and so honest," Nye Cunningham said, fighting tears. "He taught me what true love really is and how relationships should work ... and (now) I can never thank him for that."

Cunningham was honored during the service by Illinois Lt. Gov. Juliana Stratton and State Fire Marshal Matthew Perez, who presented a proclamation on behalf of the state recognizing Cunningham's service to his community.

"Governor Pritzker and I extend our deepest and most sincere condolences," Stratton said.

Perez added, "He embodied all the best characteristics associated with our profession and the Illinois fire service will be better and forever grateful for his efforts."

Other public officials who paid respects to Cunningham and condolences to his family included South Holland Mayor Don DevGraff, and representatives with the International Association of Fire Fighters, MABAS Division 24, and the AFFI.

De Graff expressed gratitude for Cunningham and his family on behalf of all of South Holland, adding that he was a dedicated firefighter and a fun-loving person.

"It is a tremendous loss to us," he said. "All of us in the village will always be there for Dylan."

Following the series of tributes, members of the Honor Guard then commenced the traditional ringing of a bell — an indicator for the end of a firefighter's daily shift and a farewell to comrades who die in the line of duty.

Immediately after the service, attendees were escorted to the funeral home's courtyard area, where Honor Guard members with the Associated Fire Fighters of Illinois lifted Cunningham's casket onto a South Holland fire engine.

A procession continued through Lansing, through South Holland and into Glenwood, where Cunningham was laid to rest at St. John Roman Catholic Church.

The Lake County coroner's office identified the victims as 39-year-old Kelton Aaron and Amari Aaron, both of Gary. Both deaths were ruled homicides with the cause of death pending.

Driver ejected from car, killed in rollover crash on I-65

A driver was killed after being thrown from a vehicle on Interstate 65 Monday.

How can you get a cut of Indiana's $19.5M settlement with Equifax?

The deadline to file a claim with the state is Dec. 16, 2020, after which payments will be distributed. The payment amount will depend on how many Hoosiers file a claim.

Valpo Target store burglarized; One in custody, others at large, police say

Police responded at 12:30 a.m. Monday to a report of a burglary and found surveillance had captured the image of three suspects in the electronics section of the store.

Yolanda Gonzalez, of Gary, was ejected from her car in the crash about 5:10 a.m., according to the Lake County coroner's office and Gary police records.

Funeral procession for South Holland firefighter will pass through Lansing

A funeral procession for South Holland firefighter Dylan Cunningham, who died last week in a training exercise, will pass through Lansing on Wednesday afternoon.

Funeral arrangements are scheduled for a South Holland fireman who died during a training exercise on Wednesday.

Police found a vehicle with evidence of a shooting in the area and are still investigating.

Spectators wave their American flags while watching the procession for fallen South Holland firefighter Dylan Cunningham on Wednesday afternoon as it passes on Burnham Avenue through Lansing.

On Wednesday afternoon, members of neighboring fire departments drove their trucks down Burnham Avenue during the funeral procession for firefighter Dylan Cunningham.

A local civilian honors South Holland firefighter, Dylan Cunningham, who died last week, by placing his hand over his heart during the funeral procession on Wednesday afternoon.

Public servants and first responders gathered Wednesday outside Smits Funeral Home in Dyer for the funeral service for Dylan Cunningham, a 29-year-old firefighter and paramedic who died last week during a training exercise.