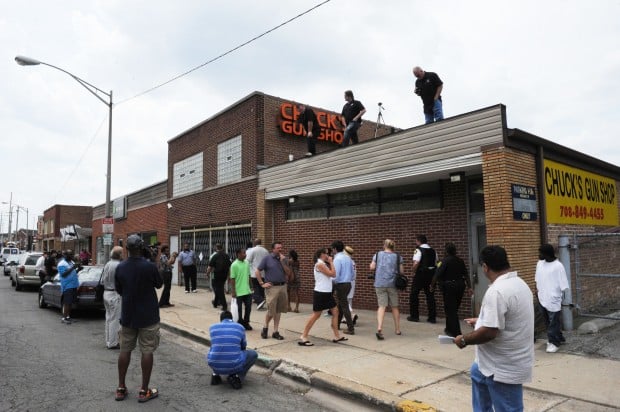 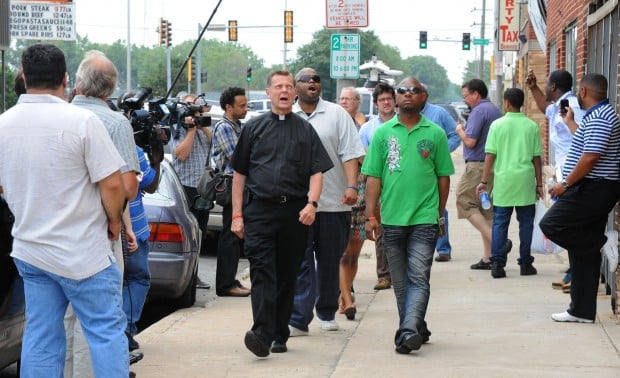 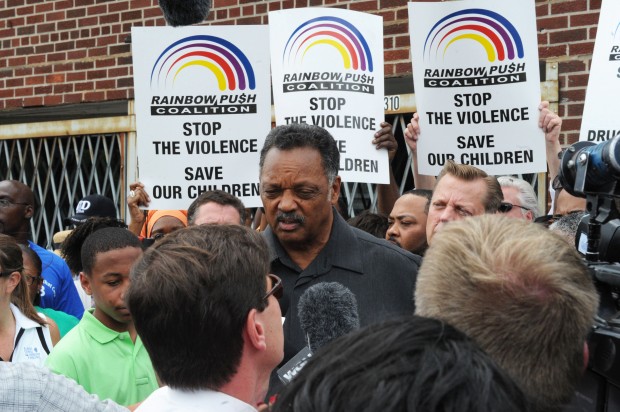 The Rev. Jesse Jackson Sr. speaks to the media Saturday during an anti-gun rally in front of Chuck's Gun Shop in Riverdale.

RIVERDALE | For village President Deyon Dean, Saturday was a day of conflict.

Dean said he sympathizes with the Revs. Jesse Jackson and Michael Pfleger and their outrage about urban violence and the amount of firearms on the streets of Chicago, but he wishes they had picked a different place to express their anger.

The two outspoken South Side clergymen chose to lead dozens of people in picketing Saturday afternoon outside Chuck’s Gun Shop, 14310 S. Indiana Ave. The shop, at nearly 50 years, is one of the village's oldest businesses.

“They have been a good business for Riverdale. They pay their taxes consistently,” Dean said of Chuck’s, whose staff on Saturday declined to comment.

Dean said the dealer has made repeated financial contributions throughout the years, enabling the village to operate various programs benefiting young people.

“I agree that we need to work harder to get all the guns off the streets, but I don’t want to come out and say anything that would put all the blame on Chuck’s,” Dean said. “They are a part of our business community.”

In 2000, the Cook County state’s attorney’s office filed a lawsuit against eight suburban firearms dealers, including Chuck’s, to try to stop the sale of inexpensive handguns often used in street gang violence.

The Washington-based Americans for Gun Safety group once identified Chuck’s as one of the largest sources of suspicious firearms in the nation, and a pistol used in the 1998 gang-related killing of Chicago Police Officer Michael Ceriale was traced back to Chuck’s, whose location on Indiana Avenue is only five blocks south of the Chicago city limits.

Those are among the reasons activists often use Chuck’s to protest. Saturday's gathering was the second demonstration there this year.

Jackson compared the amount of street violence to conditions in Iraq when U.S. troops were at war.

“We need to have a real movement to stop the flow of guns,” Jackson said, adding he is prepared for a long, drawn-out fight on this issue. “It took us long enough to get the right to vote. This could be just as long.”

While picketers marched back and forth along Indiana Avenue and Chuck’s store employees stood on the building roof using a video camera to record Saturday’s happenings, one area resident expressed his disgust.

Bob Ketcham, who said he has lived in Riverdale for 52 years, shouted chants such as “Teach your people some values!” at the picketers, and said he wishes they would focus more attention on their home neighborhoods.

“That’s where the problem is, they should go after the gangs to get rid of them,” he said.

But Pfleger, of St. Sabina Catholic Parish in Chicago’s Gresham neighborhood, said he sees the issue as the National Rifle Association opposing safety restrictions so dealers can sell more firearms.

“It’s a business decision for them, they’re willing to make a whole lot of money off our dead youths,” Pfleger said. “I’m not afraid of the NRA. They’re punks.”

Could this technique one day cure blindness?

Could this technique one day cure blindness?

Lansing man arrested for murder in driveway shooting over ex-girlfriend

Police have arrested a Lansing man for a fatal shooting in a driveway over an ex-girlfriend last week.

Dolton Fire Engineer Robert Morgan was scheduled to mark his 21st anniversary in the department on July 17.

The Rev. Jesse Jackson Sr. speaks to the media Saturday during an anti-gun rally in front of Chuck's Gun Shop in Riverdale.