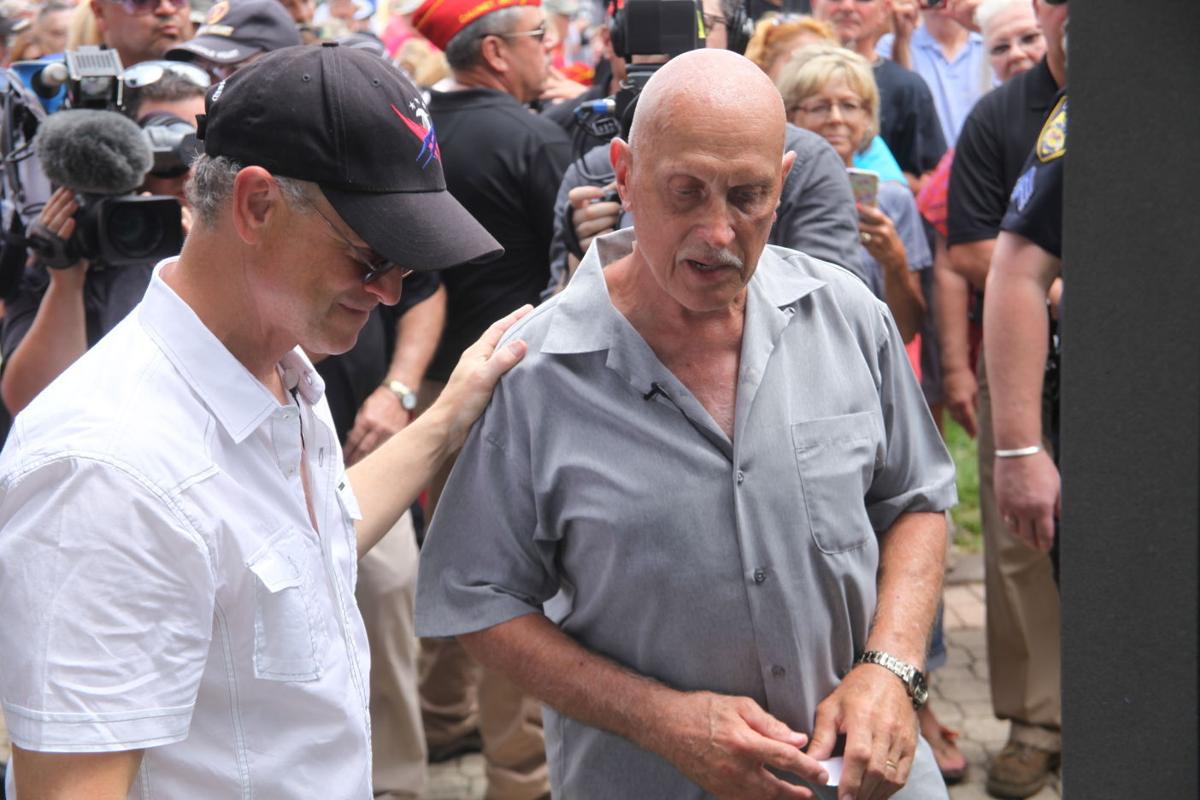 Gary Sinise (left), whose foundation gave a donation of $15,000 to the Lansing Veterans Memorial, was given a tour by its founder, Tom Luberda, in July 2015. 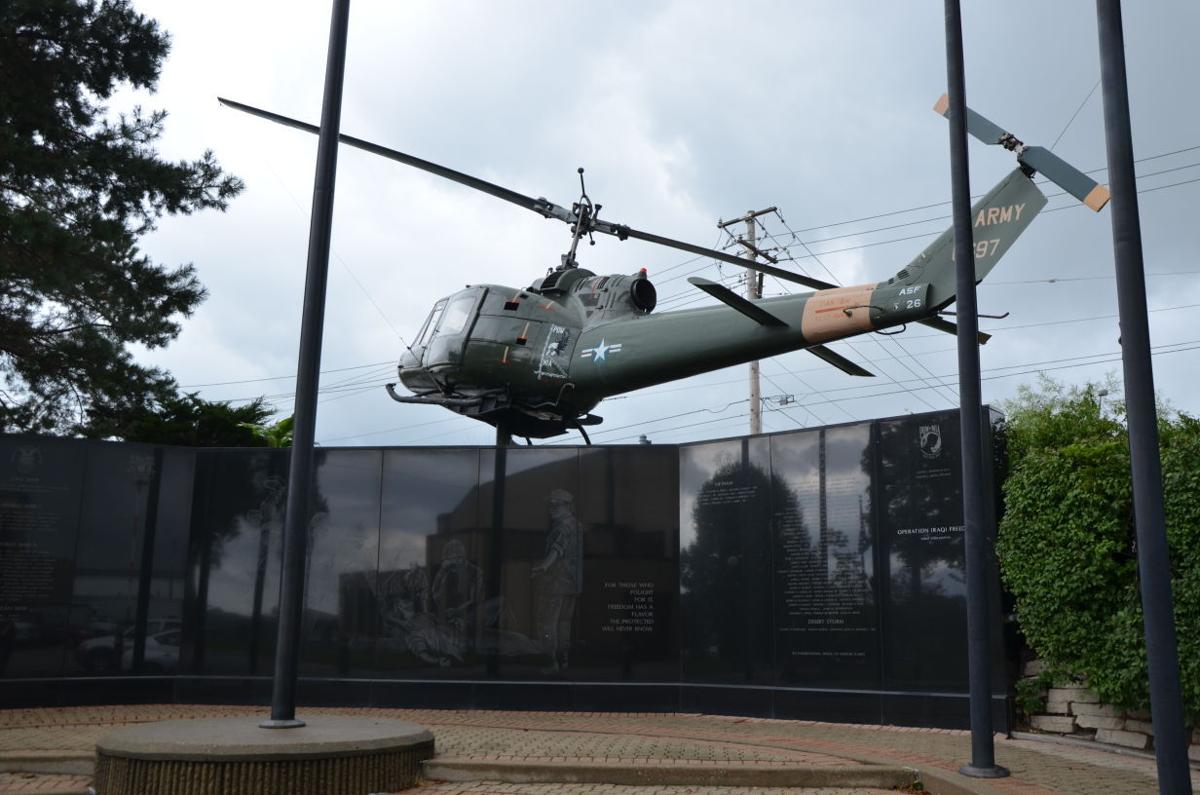 On the wall is an artist’s mural showing a soldier from each of our nation’s conflicts, and etched names of those from Lansing who have died serving in war, or names of those outside the area who have been sponsored. 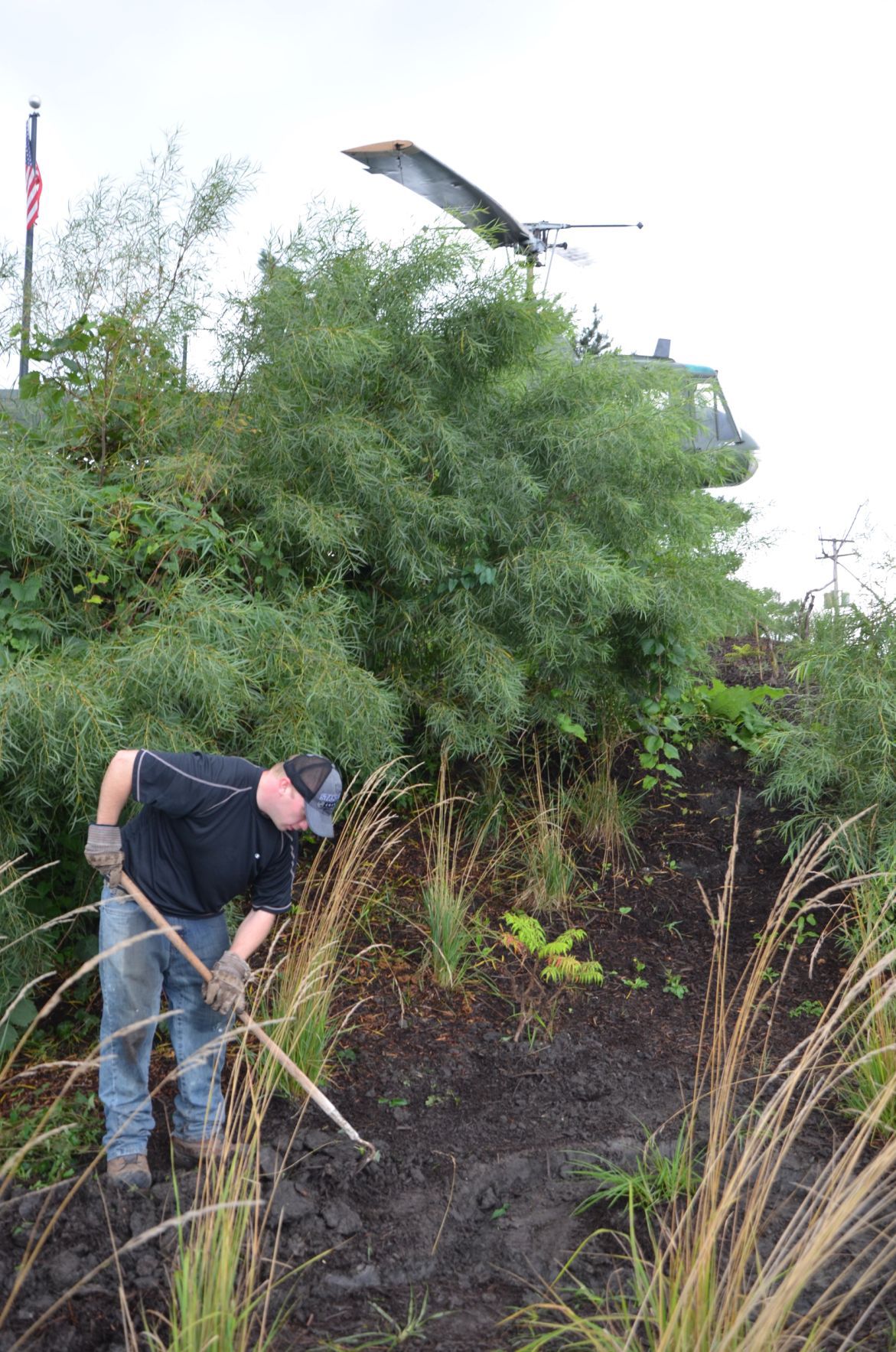 John Bijak, of Chicago Heights, is one of the many volunteers who help restore and maintain the grounds of the Lansing Veterans Memorial.

“All gave some, some gave all” is a phrase often used in reference to members of our military. Remembering those who gave all is a mission being carried out in a little spot at the corner of Glenwood-Lansing Road and Burnham Avenue in front of the Lansing Municipal Airport.

The origins of the Lansing Veterans Memorial go back to the late 1980s, when then mayor Bill Balthis got together with some members of the Vietnam Veterans of America (VVA), Chapter 153, who presented a Huey Helicopter to the airport to be displayed as a tribute to all war veterans. A sponsorship by Congressman Jack Davis expedited the process.

The idea for the memorial came a few years earlier when Lansing resident, Tom Luberda, a Vietnam Veteran who spent 11 years in the United States Marine Corps, received a free ticket to a play about Vietnam called “Tracers” being performed at the Steppenwolf Theatre. He later went back to see it a second time, and when he requested a copy of the performance for the VVA chapter, he was put in touch with Gary Sinise, who was a producer. A friendship began, and Sinise lent his support to creating a memorial and having the helicopter placed to honor veterans.

The helicopter memorial gradually grew into something more. A landscape artist named Greg Stevens proposed a courtyard of service flags, a winding pathway leading to a POW/MIA foundation, a granite wall and a large hill where the helicopter would be placed. “What there is today started with the idea to have just a helicopter and a flagpole,” Luberda says.

When it was time to bring in the helicopter, it was flown in by Jack Edwards, who would later perish while serving in the Gulf War. The helicopter, which was used in Vietnam and painted with the name of an actual Vietnam-era helicopter, was later used in South America before ending up at Glenview Naval Air Station and eventually the Lansing Municipal Airport.

The final design is full of symbolism and meaning, Luberda says. “The path separates the memorial from the POW/MIA fountain,” he says. “The path represents the road home.” Five spotlights will be added next spring at the fountain, meant to be added as a symbol of the five branches of service.

“I really like to come here at night,” Luberda says. “It’s peaceful and you can meditate, and I feel like it really speaks to you.”

On the wall is an artist’s mural showing a soldier from each of our nation’s conflicts. With the exception of a female army nurse pictured, each other face depicted is modeled after an actual veteran, most of them local men. For example, the face of the World War I soldier is that of Jim Gindl, a local Korean War veteran.

A call came earlier this year to Luberda from his old friend, Gary Sinise. During the casual conversation Sinise asked how things were going at the memorial and if there was anything he needed. Soon, Sinise was offering a donation from his foundation in the amount of $15,000 and he made a personal appearance recently.

Luberda said those funds have been used for maintenance that had been overdue and for needed repairs and additions. The landscaping around the helicopter is meant to resemble that of Vietnam. Bamboo and natural grasses have been added, paths have been cleared and a small waterway and waterfall are under construction. Repairs were also made to the memorial’s fountain.

Beyond Sinise’s donation, Luberda estimates that another $30,000 or more in donated labor and materials are helping to restore the memorial to its intended appearance. The waterfall would have been a costly addition that a neighbor of Luberda’s, Dawn Weidenaar, designed and installed. Plans to add another bronze statue to the Vietnam scene are also in the works.

Luberda says that he is seeking volunteers “with a steady hand” to help re-letter bricks already placed at the memorial.

On the weekend of Oct. 9-11, the Lansing Association for Community Events brings back its popular annual gathering, the Lansing Autumn Fest. N…

It’s hard to believe that fall is upon us. As usual, summer was just too short and we’re heading into cooler breezes and leaves crunching unde…

LANSING | Eighty years ago, Lansing was still a big farming community. The Van Til family owned a large parcel of land, including the site whe…

Lansing recognizes those who give their time and talents

Like most communities around the region and the country, Lansing wouldn’t be what it is without countless volunteer hours among those in schoo…

Leadership. Dedication. Sacrifice. And a willingness to serve in any capacity. Though these qualities and characteristics usually define those…

Gary Sinise (left), whose foundation gave a donation of $15,000 to the Lansing Veterans Memorial, was given a tour by its founder, Tom Luberda, in July 2015.

On the wall is an artist’s mural showing a soldier from each of our nation’s conflicts, and etched names of those from Lansing who have died serving in war, or names of those outside the area who have been sponsored.

John Bijak, of Chicago Heights, is one of the many volunteers who help restore and maintain the grounds of the Lansing Veterans Memorial.