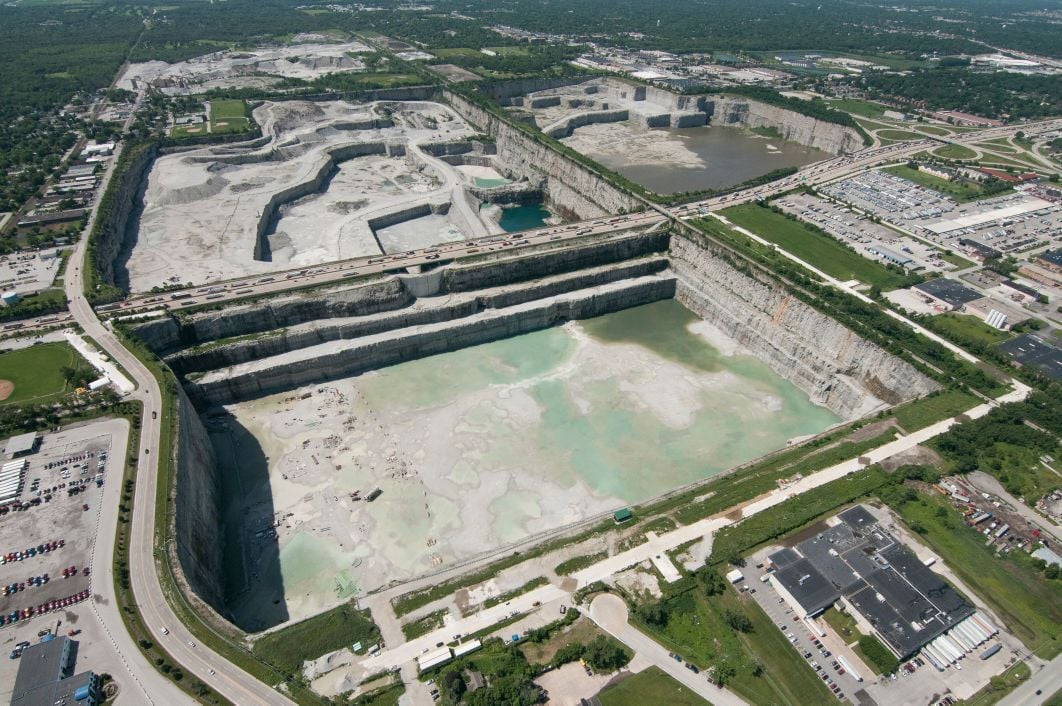 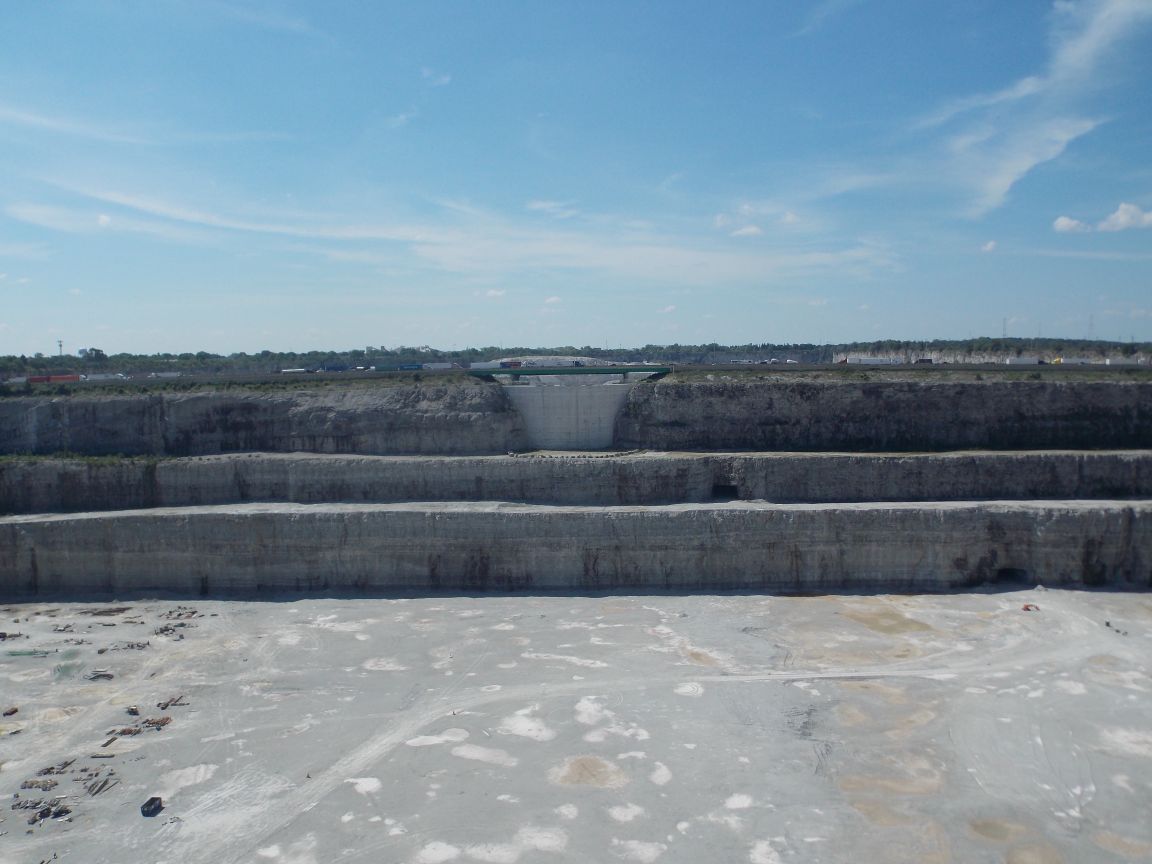 Traffic flows on I-80 300 feet above the north lobe quarry floor in Thornton, which is set to become a nearly 8 billion gallon stormwater reservoir. 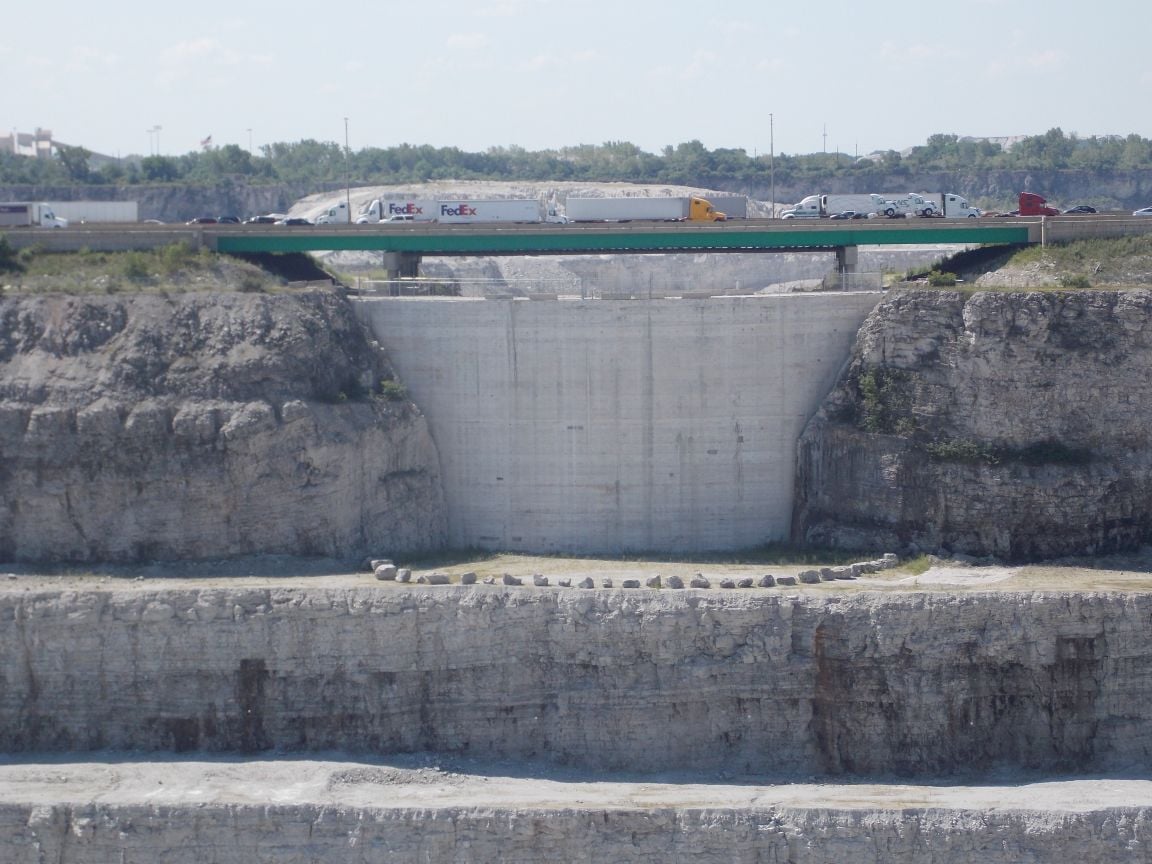 A 112-foot dam that MWRD officials believe may be the largest of its kind in Illinois will hold reservoir water back from Thornton Quarry's still-active south lobe. 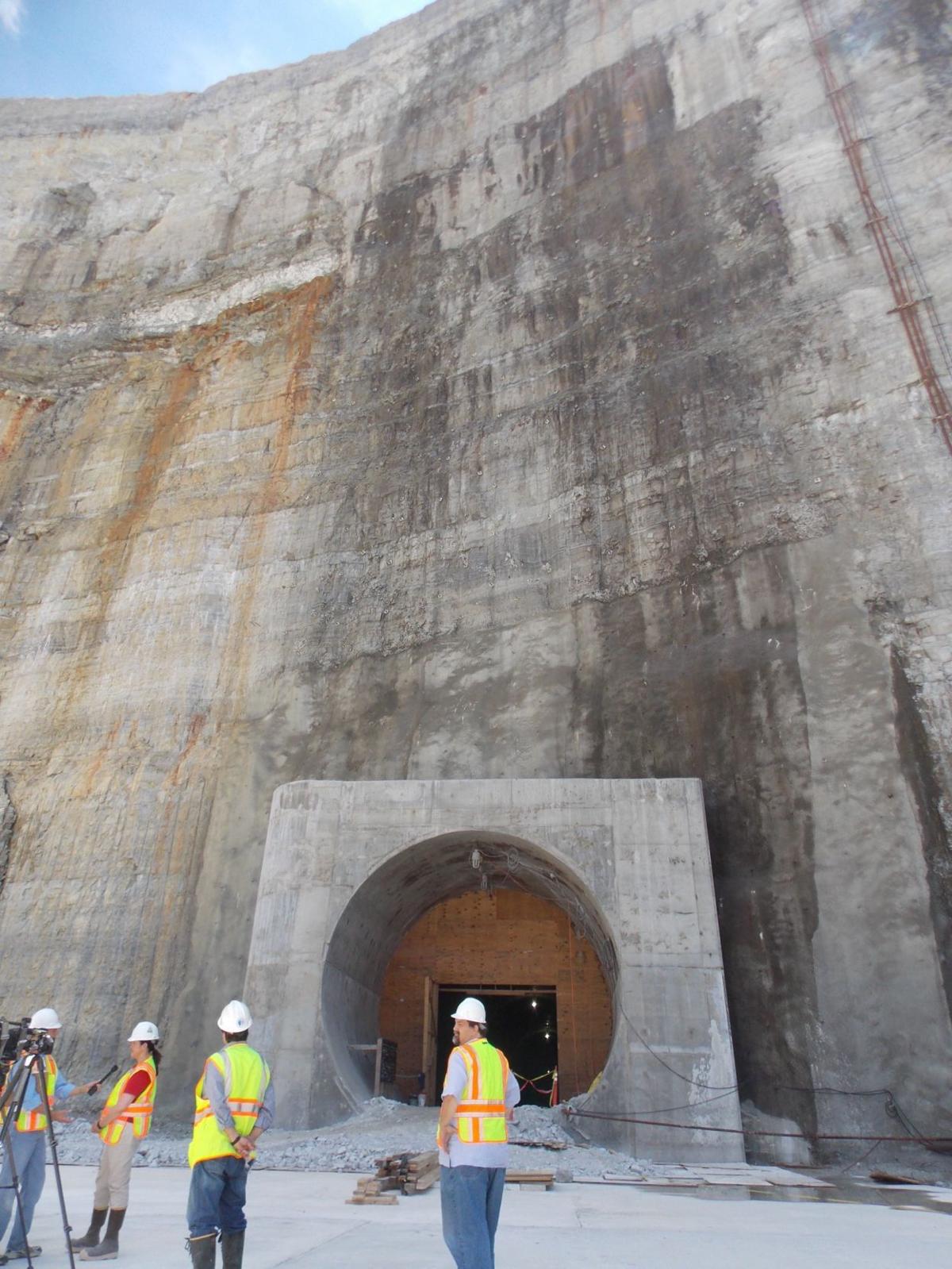 Workers and a film crew stand near the opening of a 30-foot-diameter tunnel that will link the new Thornton Reservoir with the Deep Tunnel system. 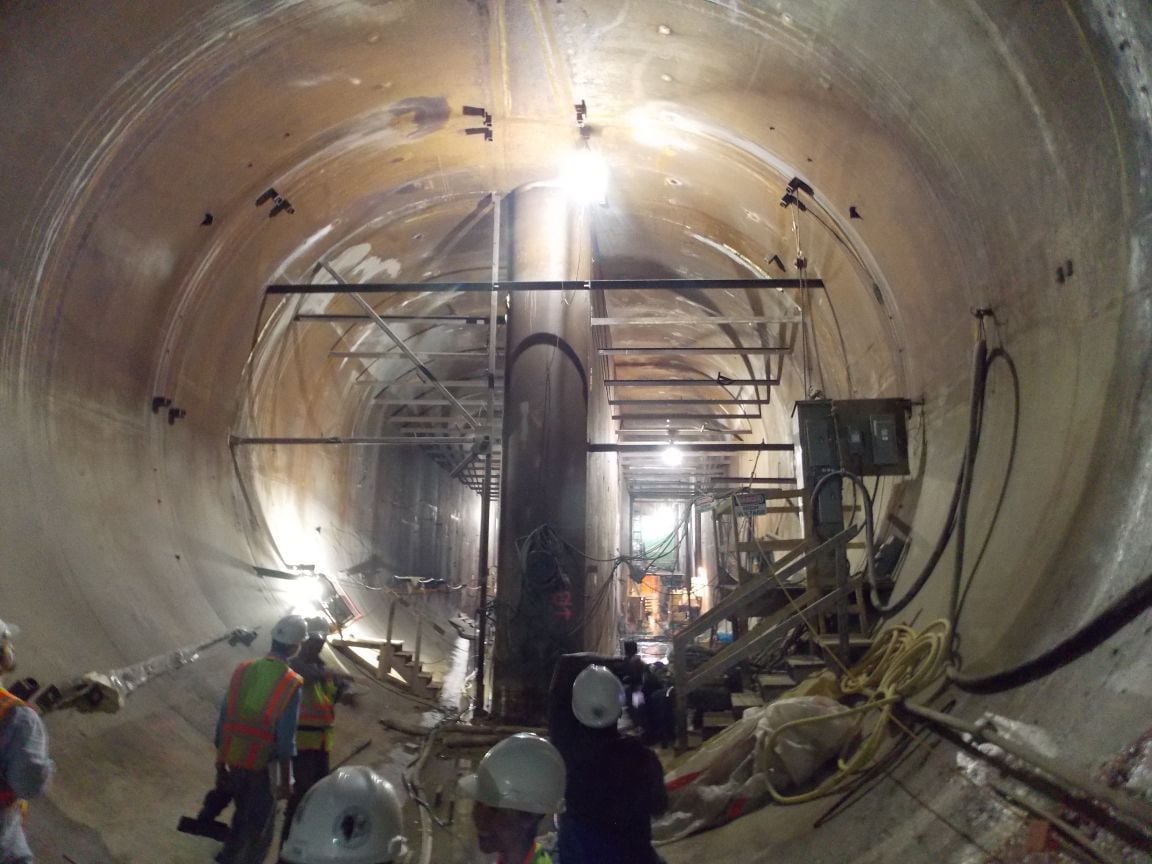 Massive gates will control the influx and output of water from Thornton Reservoir once it is connected to Chicago's Deep Tunnel system. 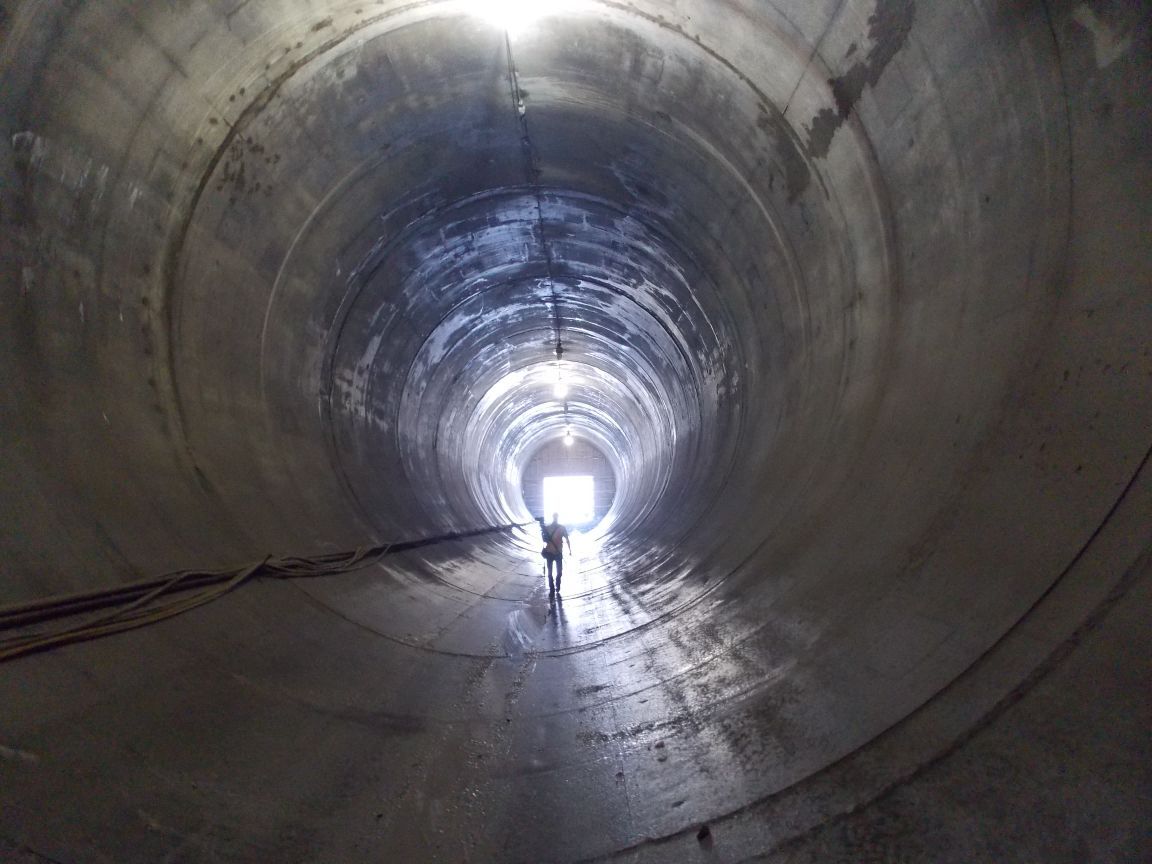 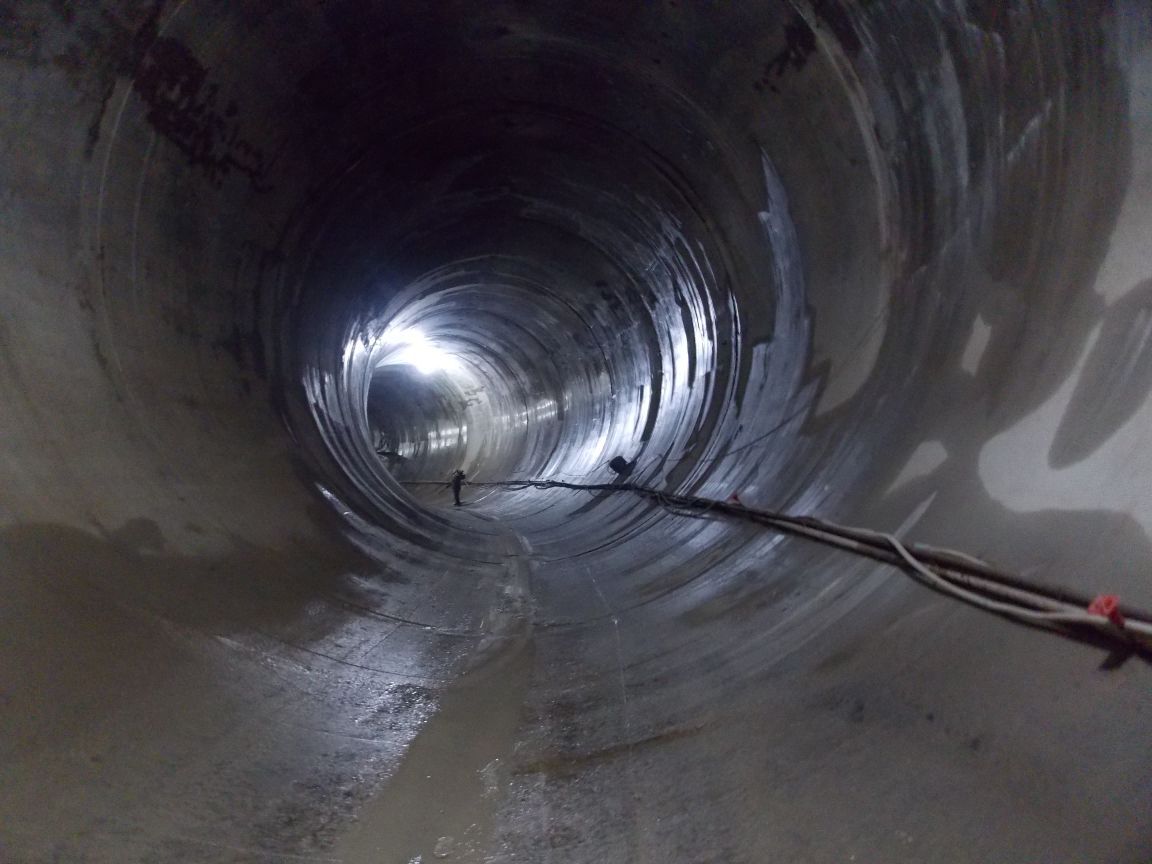 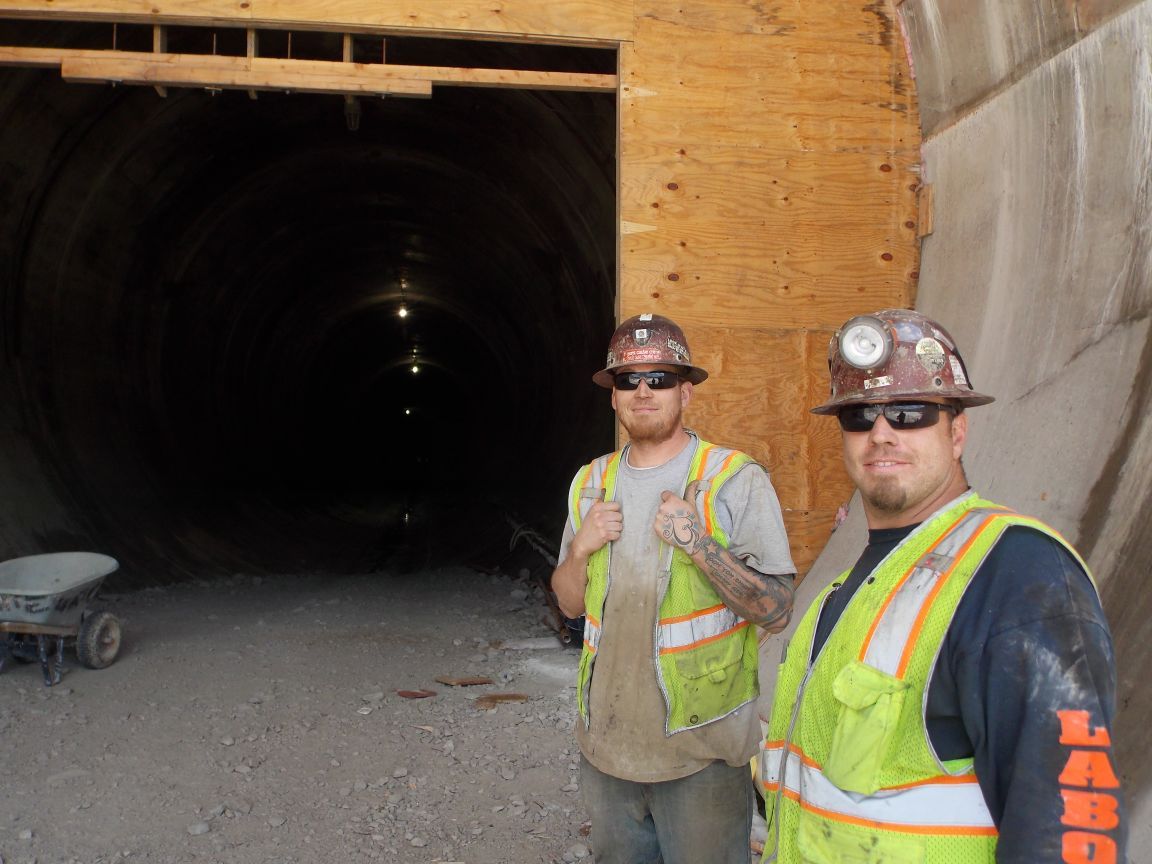 Laborers Randy Leach, of Roselle, Ill., and Billy Borowski, of LaSalle, Ill.,, take a break at the mouth of the tunnel that will link Thornton Reservoir with Chicago's Deep Tunnel system. 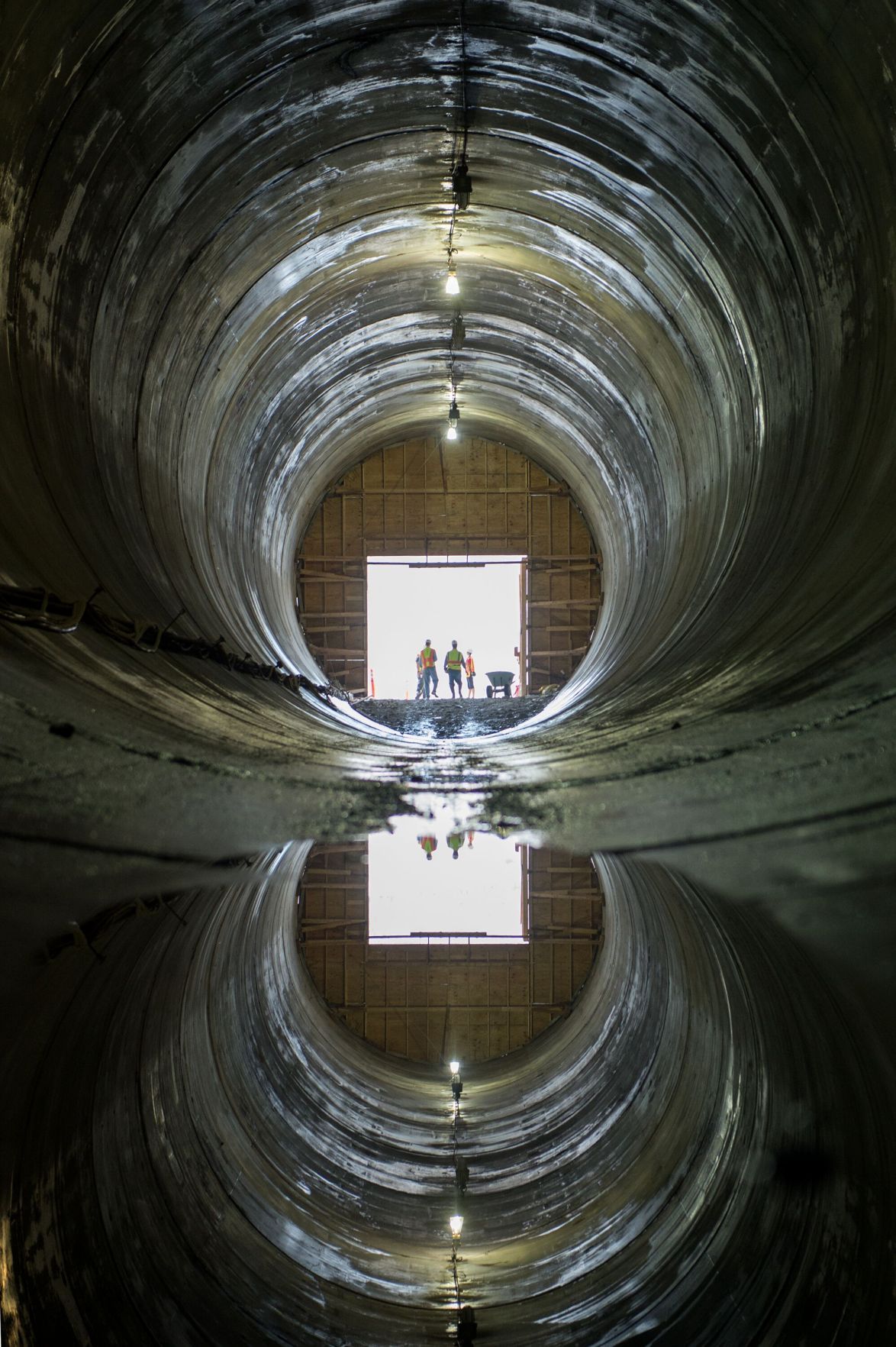 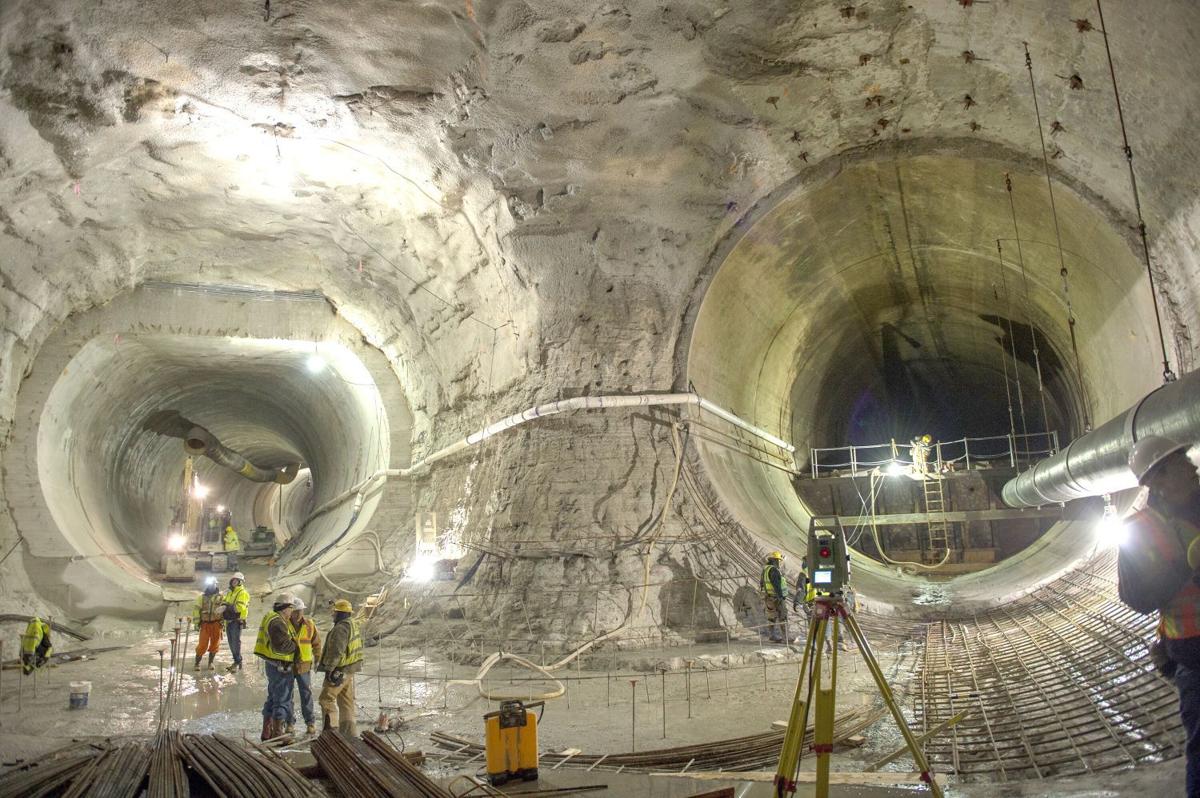 Workers excavate portions of Chicago's Deep Tunnel system to link it to the new Thornton Reservoir. 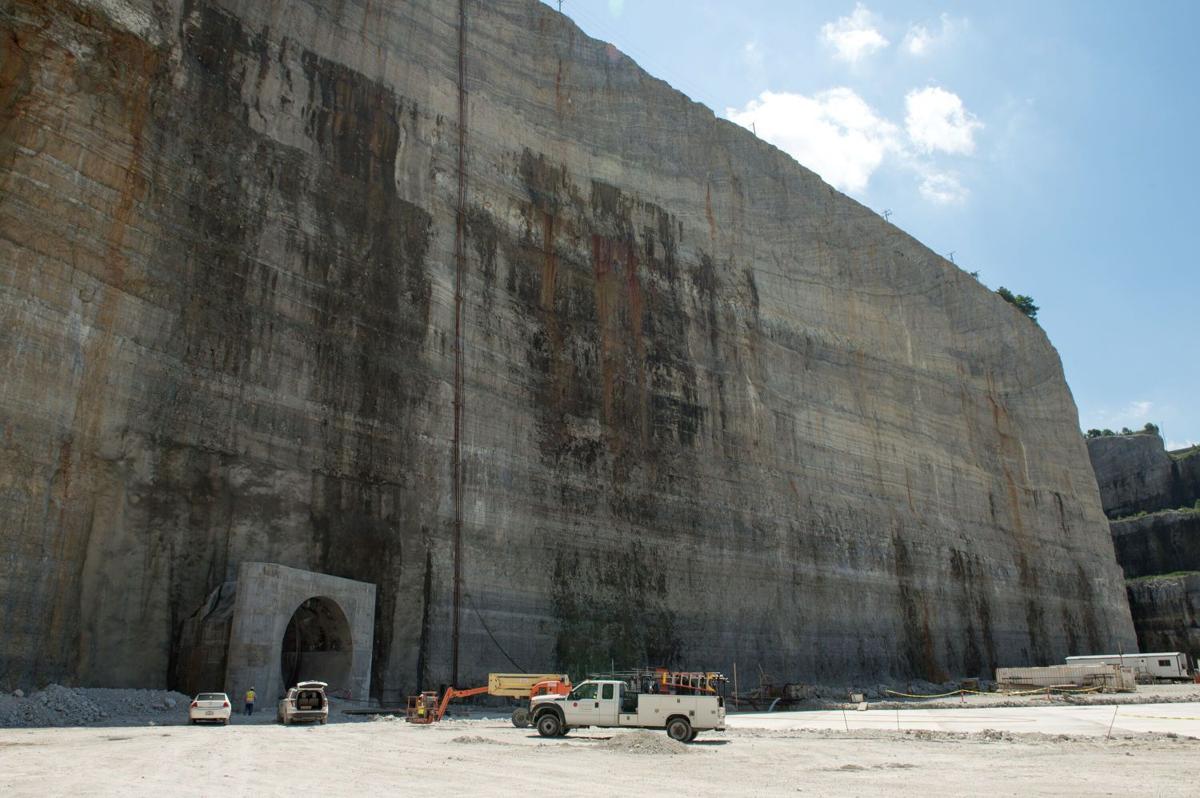 Vehicles are parked near the outlet of a 30-foot diameter tunnel that connects Thornton Reservoir with Chicago's Deep Tunnel system.

Laborer Randy Leach was on lunch break still wearing his hard hat, his yellow vest coated with dust and boots plastered with white mud. A cool breeze flowed from the dark reaches of a massive 30-foot tunnel at his back, offering relief from the hot midday sun.

As Leach, of Roselle, Ill., prepared to return to his work at the tunnel's far end, he looked out across the pale, flat moonscape of Thornton Quarry's north lobe floor. Normally consumed with the day-to-day efforts involved in linking this tunnel to a larger system underlying much of Chicago, he took a moment to reflect on his job.

"If you stop and think of it, we're making history," he said.

Once Leach and his fellow workers complete their efforts, no boots will touch that quarry floor again, barring an emergency. There will be no dust there and the mud will no longer be white. Instead, the area will be inundated with as many as 7.9 billion gallons of storm and sewer water. Driven by gravity, it will come from Lansing and 13 other region communities, along with Chicago's South Side.

In 1900, Chicago stunned the world by reversing the flow of its namesake river, channeling storm runoff along with a good measure of sewage away from Lake Michigan, where the city's drinking water is drawn. Instead of cholera epidemics erupting after significant rainstorms, the polluted water was sent away from the city via canals still in use today, eventually winding up in the Mississippi River and inspiring the rage of city leaders in St. Louis.

But as the area's population grew and land was developed, the city's combined sanitary and storm sewers — and treatment facilities — again would become overloaded after hard rainfalls. Warnings were posted. Beaches were temporarily closed. In outlying areas, sewer systems became overtaxed and property owners along waterways suffered severe flooding.

So in the 1960s, officials hatched a plan to construct a tunnel and reservoir system that would conduct storm and sewer water away from the lake and out of waterways. Rather than send raw sewage to St. Louis, it would be collected until it could be treated before being released back into the Cal Sag Channel and other canals.

It was no small plan.

Dubbed by the Metropolitan Water Reclamation District of Greater Chicago "one of the largest civil engineering projects on Earth," the plan known as "Deep Tunnel" and "TARP" will ultimately include three reservoirs, 109 miles of 30-foot diameter tunnels deep within the bedrock and a total capacity of 20.55 billion gallons of water.

While Deep Tunnel is tied to the river reversal, the Hanson Material Service quarry in Thornton has a link to another significant part of Chicago history. The first person to start digging limestone in Thornton was Chicago pioneer Gurdon Hubbard, who years earlier had been dispatched from Fort Dearborn to gather armed assistance to a rumored impending attack by Native Americans. By the time he returned the attack was over, and the massacre of the fort's defenders is commemorated with a star on Chicago's flag.

While Hubbard's quarrying efforts didn't last long, others soon took up the work of unearthing limestone valued for its usefulness throughout the construction industry.

"It's in everything," said Adel Awad, senior civil engineer with the MWRD. "Buildings, roads, you name it. Everything in Chicago." Not a polished stone for building faces, it's primarily used in cements and concrete mixes, or as a base material.

Many of the crushed limestone rocks contain hints at the area's distant past as well. Fossils of ancient sea creatures, trilobites and ancestors of snails and mussels as well as sea plants called crinoids, tell the story of an equitorial tropical reef that existed 600 million years ago, before tectonics had pushed Illinois and Indiana north.

Their compressed remains resulted in a profitable business that's still underway. The last limestone was removed from the soon-to-be-flooded north lobe in 2013, but rocks still are being mined from the larger southern lobe of the quarry, where excavation will continue.

Though mining was completed in the north lobe, much work remained to turn the giant hole in the ground into a reservoir. Limestone is a porous rock; water flows through it via tiny holes and chambers.

Workers drilled a few feet back from the quarry walls and injected tons of pressurized grout, effectively sealing off the quarry. Injecting the sealant into the limestone also ensures its longevity, as it's protected from erosion by the rocks in front of it.

"It was better than spackling over the walls," he said.

Below the quarry's floor is a layer of naturally occurring shale, an impermeable rock that similarly will prevent water from escaping. And the large opening under Interstate 80/94 where huge dump trucks once hauled rocks from the north lobe has been sealed with a 112-foot-tall dam constructed from 34,000 cubic yards of concrete.

"We think it's the largest dam in Illinois," Brown said.

Once it comes online, Thornton Reservior will have the capacity to hold nearly 8 billion gallons of water. The untreated water will be fed by gravity through a series of tunnels from municipal sewer systems eventually to the former quarry, where MWRD President Mariyana Spyropoulos said she expects a constant level of about 10 feet of water to remain at all times.

After rainstorms and in the spring, that level is likely to be deeper, with the waterline maxing out at about 5 feet below the reservoir's rim.

"We're excited," Spyropoulos said. "This will help protect people and reduce flooding in the county."

Through a series of gates, the water will be slowly drained — once again via gravity — from the reservoir and processed at the district's Calumet treatment facility before being released into the Cal Sag Channel. The reservoir's floor is 300 feet deep; the treatment facility's intake is 350 feet underground.

Looking into the future

"We're building this to last," said Awad, the senior engineer.

For the more than 150,000 estimated vehicles driving every day on I-80/94 300 feet above the quarry floor, the trip will change from seeming like a Grand Canyon flyover to skirting the shoreline of a new lake, albeit one filled with sewer water.

Awad said the district will install aerators in the reservoir, pumping air through the water to "reduce the septic effect" and cut down on odors. A similar setup is in use at another, smaller MWRD reservoir, Brown said, "and we haven't had any complaints about the smell."

But, he noted, that facility also is near a separate waste treatment facility.

At some point, Awad said, if all the linking sewer systems can somehow keep their sanitary and storm sewers separated, most of the water flowing into the new reservoir will be somewhat clean. But that's not something the district anticipates happening soon, and no recreational use of the reservoir is in the MWRD's plans.

But if the project fulfills its potential and significantly reduces flooding in southern Cook County, that will be enough, Spyropoulos said.

She echoed the words of her employee, Leach: "We're making history here."

"We're continuing the work they started with the Chicago River," Awad added.

Part of Thornton Quarry being converted into reservoir

Lansing street renamed to honor one of village's oldest families

LANSING | A crowd gathered at the corner of Henry and Randolph streets on Wednesday to honor the Krumm family, who first planted roots in the …

Here's the 20 headlines that drew the most readers on nwi.com in 2015.

An explosion dislodges limestone from a wall at Thornton Quarry, a part of which will become a new reservoir. Provided by Metropolitan Water R…

Traffic flows on I-80 300 feet above the north lobe quarry floor in Thornton, which is set to become a nearly 8 billion gallon stormwater reservoir.

A 112-foot dam that MWRD officials believe may be the largest of its kind in Illinois will hold reservoir water back from Thornton Quarry's still-active south lobe.

Workers and a film crew stand near the opening of a 30-foot-diameter tunnel that will link the new Thornton Reservoir with the Deep Tunnel system.

Massive gates will control the influx and output of water from Thornton Reservoir once it is connected to Chicago's Deep Tunnel system.

Laborers Randy Leach, of Roselle, Ill., and Billy Borowski, of LaSalle, Ill.,, take a break at the mouth of the tunnel that will link Thornton Reservoir with Chicago's Deep Tunnel system.

Workers excavate portions of Chicago's Deep Tunnel system to link it to the new Thornton Reservoir.

Vehicles are parked near the outlet of a 30-foot diameter tunnel that connects Thornton Reservoir with Chicago's Deep Tunnel system.