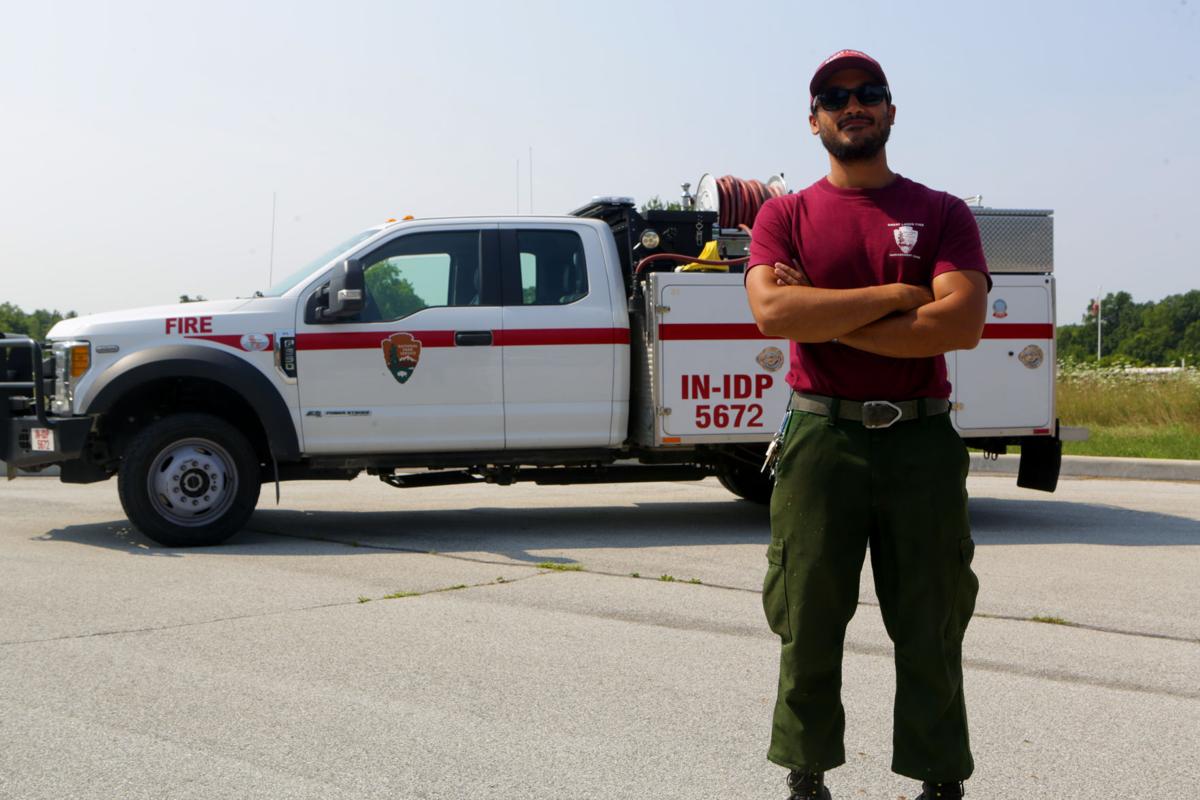 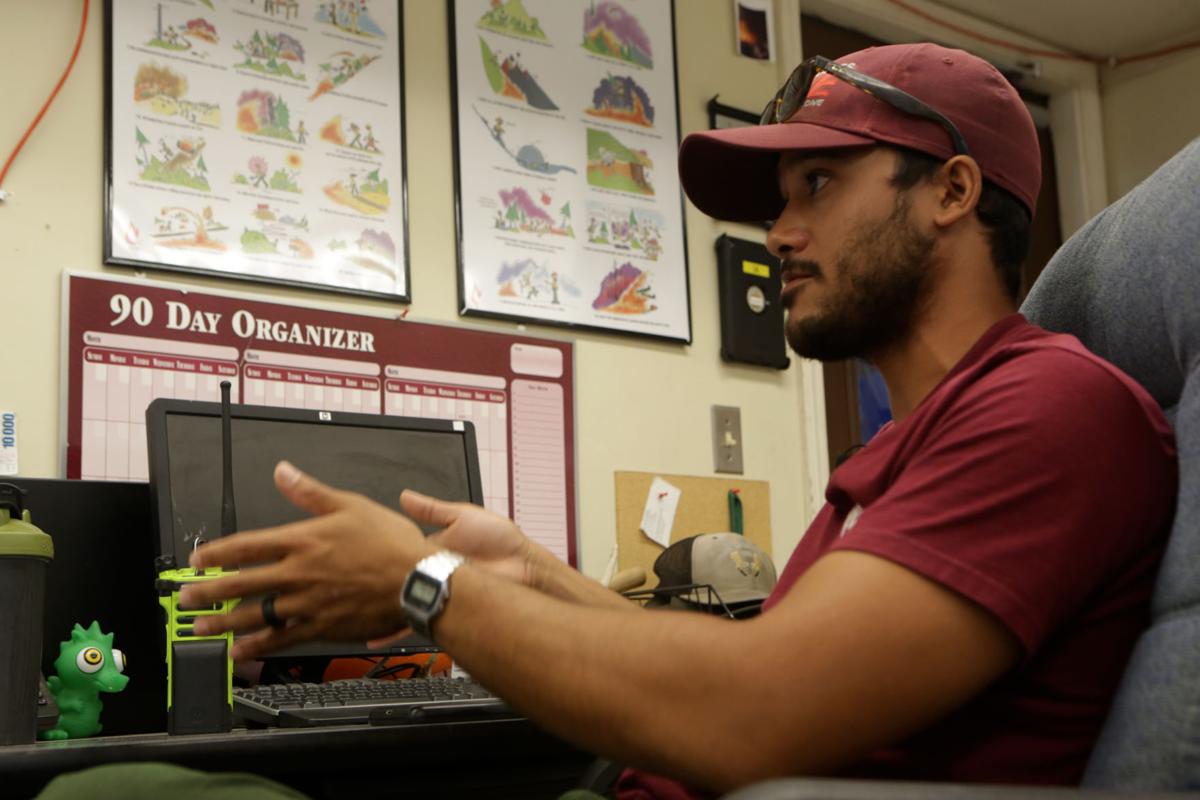 Christian Pichay, a senior firefighter with the National Parks Department, talks about traveling all over the country to help prevent and fight fires. 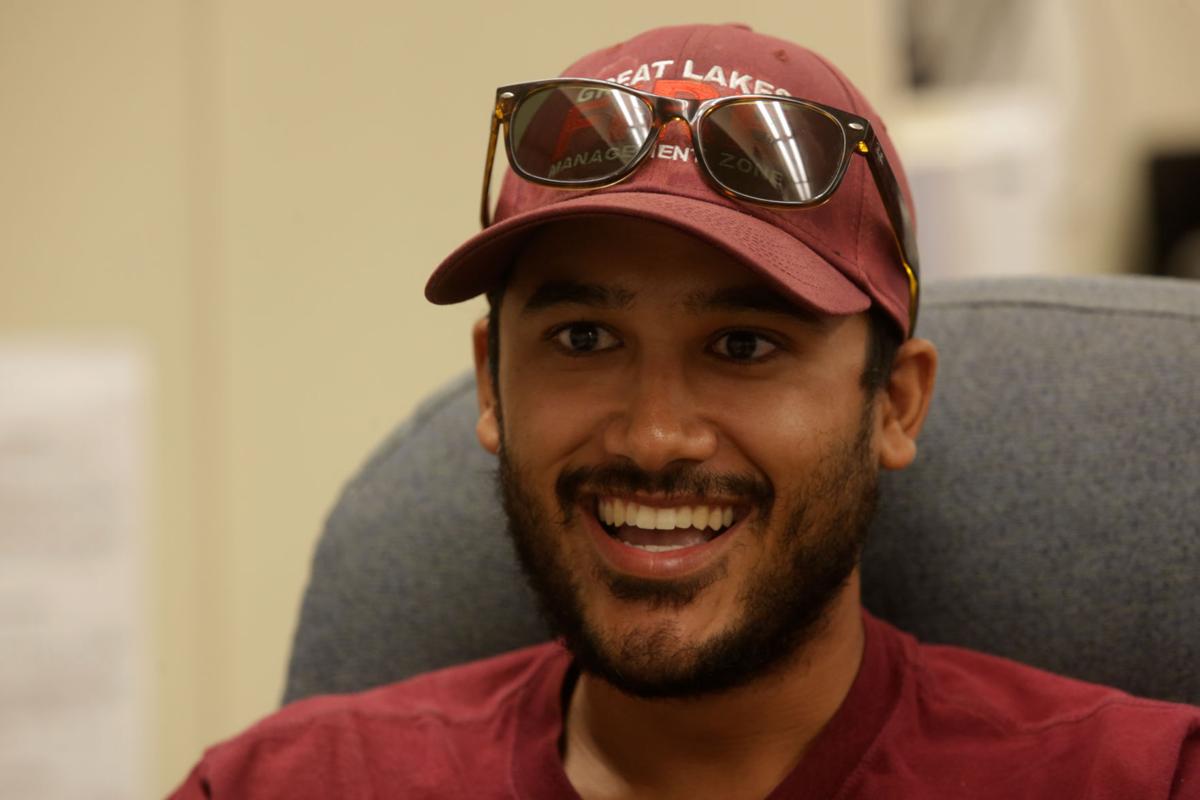 “You have to be OK with boredom and staying still and patrolling for hours on end,” said Christian Pichay, a senior firefighter with the National Parks Department. “And then you get one day out of five that’s ‘OK, it’s go time’ and you’re going to suppress this fire.” 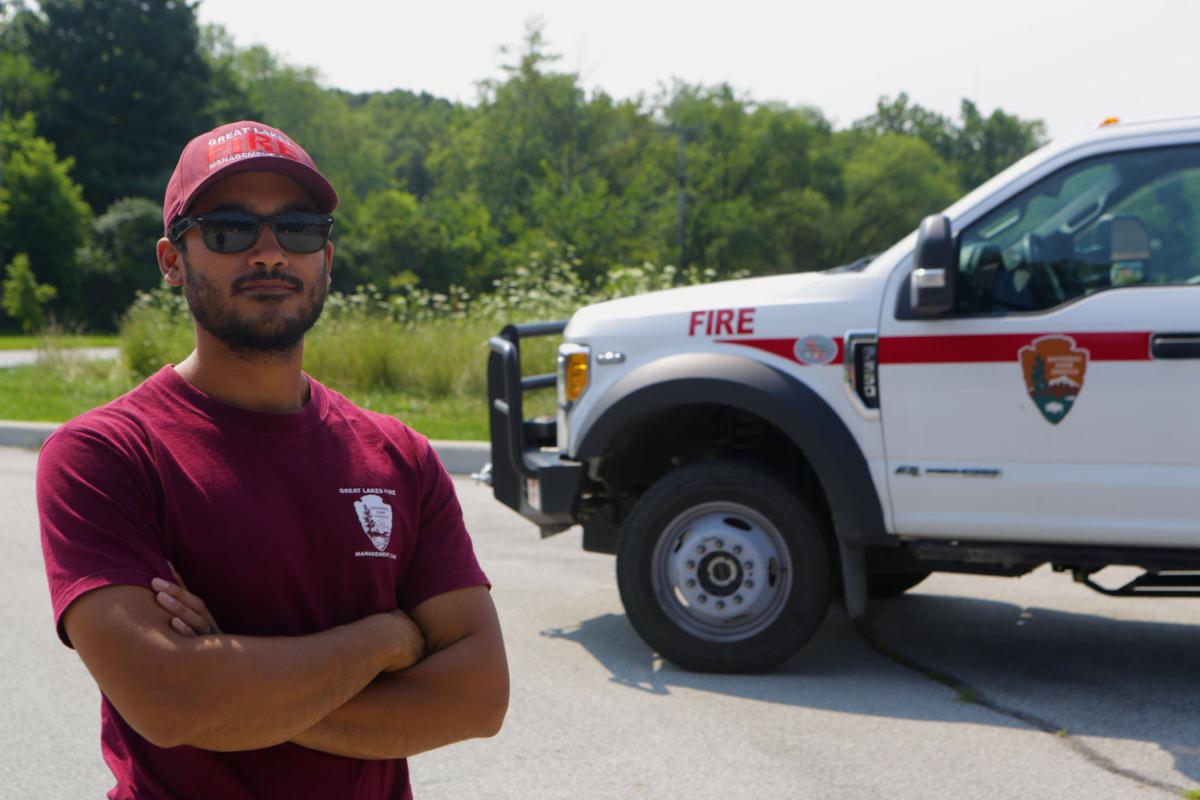 PORTER — From the relative indoor comforts of a fire station at Indiana Dunes National Park, Christian Pichay paraphrases a saying popular among his fellow wildland firefighters.

The job, he said, is “extreme boredom peppered with intense moments of adrenaline.”

And there’s probably a lot more of both in his near future.

Pichay, a senior firefighter in the Great Lakes Fire Management Zone, recently returned from a two-week work trip to Dinosaur National Monument, a sprawling park straddling the Utah/Colorado border that was once home to, as the name suggests, dinosaurs on its 210,000 acres.

There, Pichay and his colleagues Brandon Ramirez and Rachel Lim spent two weeks working in fire suppression, keeping a watchful eye over lands at the greatest risk for a firestart and acting quickly to put out any ignitions, even ones as small as a single tree.

In two weeks stationed in Colorado, the trio responded to three fires, including a single juniper tree that had been struck by lightning, which is not an uncommon amount of action for a detail like theirs, Pichay said.

Instead of being deployed to actively fight a fire in need of hordes of resources — like the enormous Bootleg Fire currently engulfing more than 400,000 acres of southern Oregon — the Great Lakes crew was sent out to prevent a fire from developing while strategically stationed in an area that seems most susceptible.

The detail, called a severity assignment, falls on the less exciting end of the wildland firefighting spectrum, but Pichay said it still means being ready to react at a moment’s notice.

“You have to be OK with boredom and staying still and patrolling for hours on end,” he said. “And then you get one day out of five that’s ‘OK, it’s go time’ and you’re going to suppress this fire.”

Shortly after Pichay and his colleagues drove back to Indiana, another two firefighters from the same station were deployed to take their place, and it likely won’t be long before Pichay hits the road again. He said he’s nearly ready to head out on another assignment, and his next trip could take him anywhere that fires are burning, or are likely to start.

It’s common practice for Pichay and his ilk to be deployed elsewhere every fire season, but the past two years have been longer and more devastating than any in recent history, stretching resources to the limit. He said that while fire season used to run from June to August, it’s now more like April through December.

“I think what we’re seeing is just a new trend,” Pichay said, after acknowledging that while these seasons may be unprecedented in recorded history, we’ve only been tracking fires for a fraction of millennia they’ve been burning.

“We’re seeing things trending toward hotter, longer, intenser. That’s just the new reality of what we’re dealing with. And it doesn’t just affect the people out west.”

Unseasonal fires are burning right now in Minnesota and Manitoba, part of what caused the declaration of five Air Quality Action Days in Northwest Indiana last week. Historic drought conditions persist in the West as well, so there’s little expectation that this fire season will slow down anytime soon.

With the increase in fire activity, leaders and crews have been cautioned all year to put firefighter safety first and to pace themselves in an effort to avoid burning out, Pichay said.

“We’re all hearing the same things, and I think this season especially it’s been talked (about) over and over again as, ‘Hey, we’re spread thin,’” Pichay said. “Fires are more intense, resources are scarce. Be smart.”

Wildfires aren’t limited to remote areas, either, including at the Dunes, where Pichay has been stationed since February. During the Region's wildfire season this spring, he spent his time primarily on prescribed burns, fires set strategically by park officials to eliminate fuels like dead grass and leaves in an effort to keep the size of natural (or human-caused) fires small.

Relatively speaking, every wildfire at the Dunes is small. The entire park is 15,000 acres, or less than 5% of the size of the Bootleg Fire.

That doesn’t mean, though, that wildfires can’t impact life here. More days of dangerously smoky air are possible for the rest of the summer and fall, and every state in the nation can be susceptible to fire.

Pichay said the same precautions urged in traditional wildlife regions, like drowning campfires before leaving, putting hot coals in designated receptacles, and keeping things like fireworks away from dry grass, apply in the Region, too.

“We can’t escape it wherever we’re at,” Pichay said. “Fire’s a part of the landscape, and we can either manage it and prevent it, or try to prevent it, and educate on it, at least. Or it’s going to hit us like a freight train … even here in Indiana.”

No bail for woman charged with murder of Region sports figure

Raquel M. McCormick is accused of hitting Region sports figure Thomas Brankin with her Chevrolet Equinox on Aug. 11, 2020, in downtown Highland, causing a massive head injury that led to his death.

Man convicted of killing his grandmother, setting her home on fire

"To press down on the face of someone who loves you with the intent of ending their life — that's no accident," Lake County Deputy Prosecutor Daniel Burke said. "That's murder."

Christian Pichay, a senior firefighter with the National Parks Department, talks about traveling all over the country to help prevent and fight fires.

“You have to be OK with boredom and staying still and patrolling for hours on end,” said Christian Pichay, a senior firefighter with the National Parks Department. “And then you get one day out of five that’s ‘OK, it’s go time’ and you’re going to suppress this fire.”