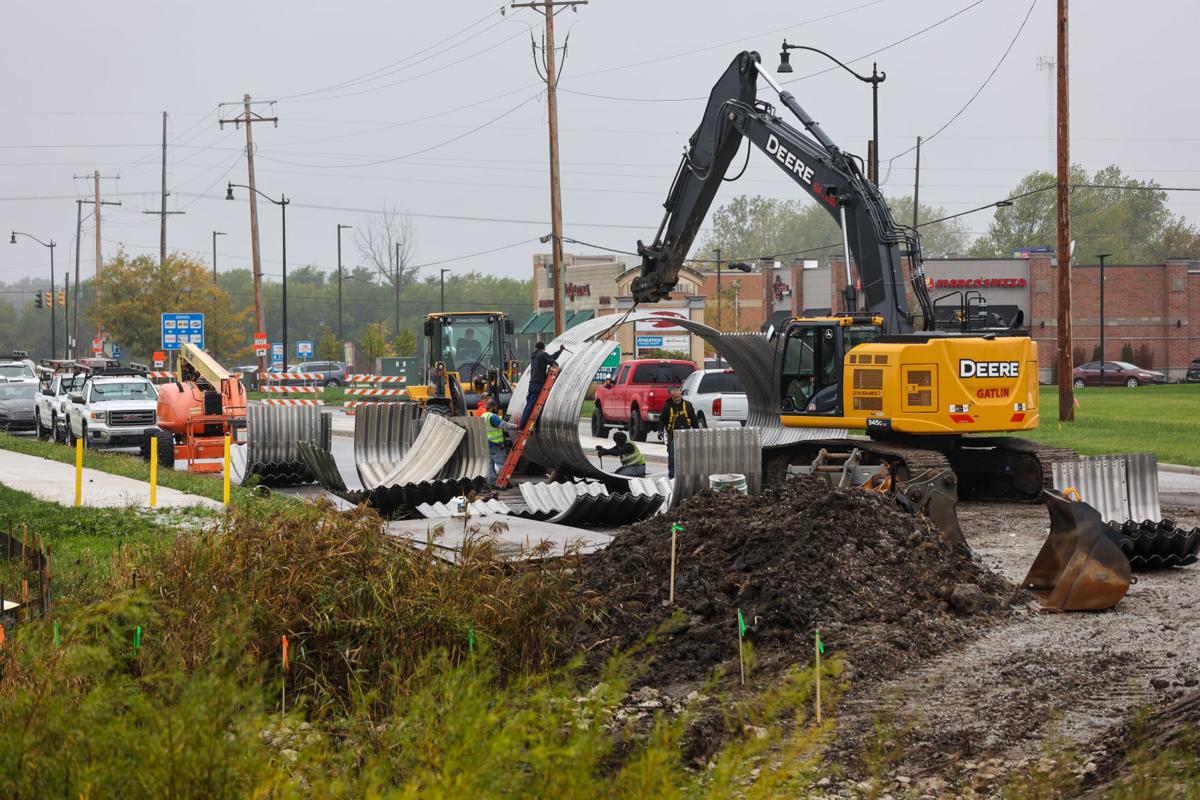 The anticipated opening of the roundabout at Iowa Street and 109th Avenue has been stalled because of a delay in shipping lights needed for the project. 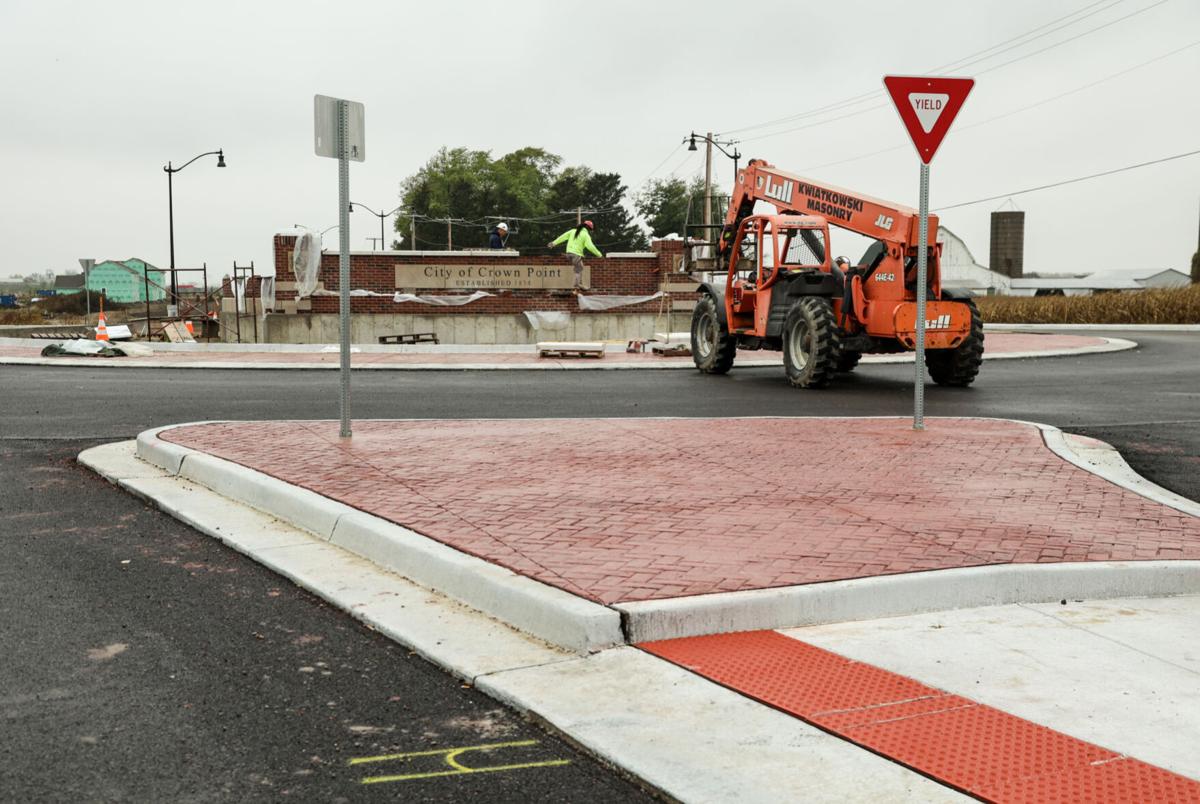 Work on the roundabout at 109th Avenue and Iowa Street in Crown Point nears completion, but the opening likely will be later this month, Mayor David Uran said. 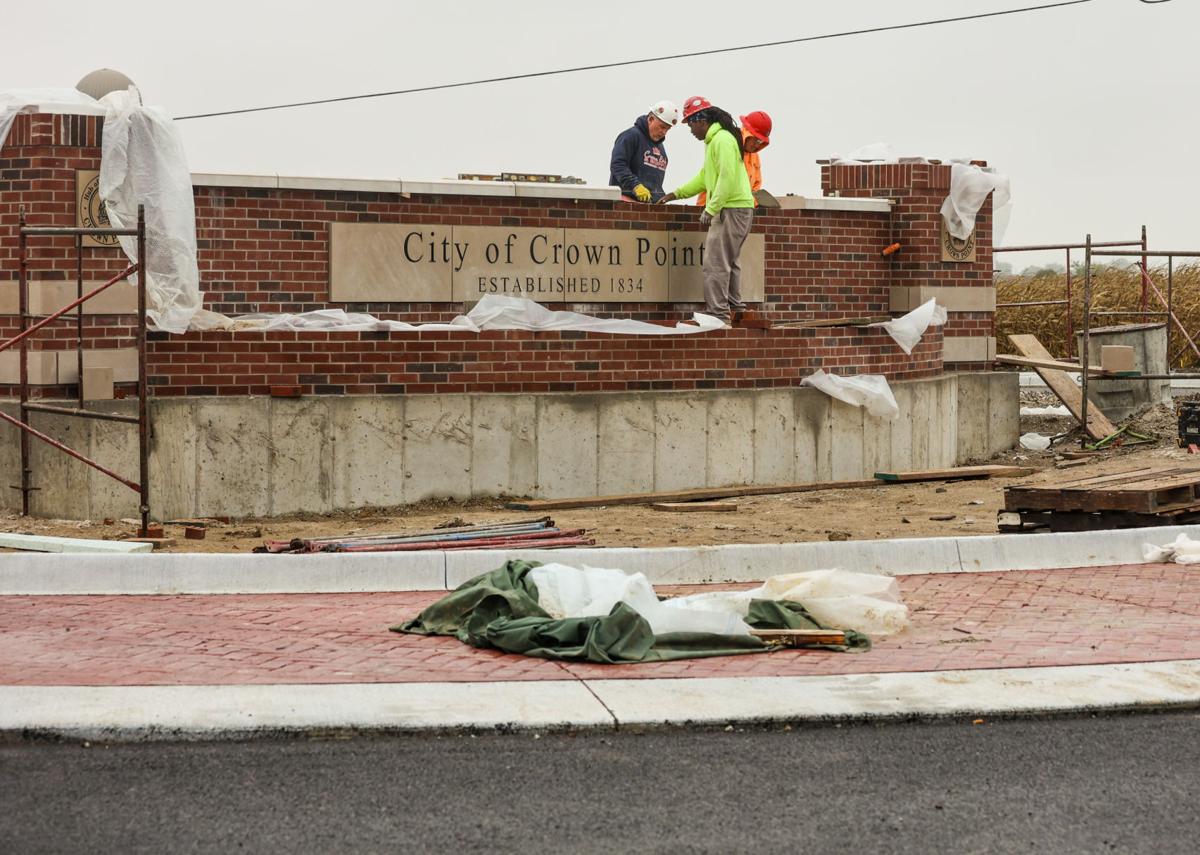 Crews install masonry work on the sign at the roundabout at 109th Avenue and Iowa Street.

CROWN POINT — The anticipated opening this week of the roundabout at 109th Avenue and Iowa Street has hit a delay, Crown Point Chief of Staff Greg Falkowski said.

"It will probably be opened in the next two weeks. We're not far away," Falkowski said.

Falkowski said the delay is due to the shipment of illumination heads for light poles at the roundabout.

"They haven't been shipped. Once they are shipped they can be installed and the roundabout opened," Falkowski said.

Mayor David Uran last month said the roundabout could be opened by the first week in October, but with the delays, that anticipated opening will likely be in mid-October or later.

In total, Uran said the project will cost $2.3 to $2.4 million, of which the city is responsible for 10%. The other 90% was funded by federal dollars from the Highway Safety Improvement Program (HSIP) through the Northwestern Indiana Regional Planning Commission (NIRPC).

INDOT is doing its final stages on the Interstate 65/109th Avenue interchange, and that's still on pace to be opened around mid-November, said Cassandra Bajek.

"Rain has been an issue but we feel confident it will be completed by then," Bajek said.

The Interstate 65 ramps at 109th Avenue in Crown Point closed earlier this summer.

INDOT is replacing two signalized intersections at the Interstate 65 ramps at 109th Avenue with roundabouts, which is known as a "dogbone" interchange.

The state project is expected to cost about $5 million.

Falkowski said it's his understanding that all the Crown Point/INDOT road projects from east of Interstate 65 and Iowa to the Winfield boundary line along 109th Avenue should be completed by mid-December.

Winfield town officials in mid-August closed down a portion of 109th Avenue in Winfield to tackle a major road improvement project.

A portion of 109th Avenue, at the intersection of Grand Boulevard, in Winfield, was closed for about 60 days for road construction.

The project is set to improve the intersection, which town officials have called “very dangerous.”

The project also includes replacing a large culvert under the intersection as well as installing storm sewers along the road.

I-65 ramps in Crown Point to close Tuesday until the fall; more work slated for 109th Avenue in south Lake County

Beginning Tuesday, the Interstate 65 ramps at 109th Avenue in Crown Point will close until the fall, the Indiana Department of Transportation (INDOT) announced in a press release.

The apparent low bidder on the project, pending review of its documentation, is Rieth-Riley Construction Co. The Gary firm bid $1,097,489.59.

Beginning Monday, work is set to begin on the city's final leg of its 109th Avenue Transportation & Safety Improvement plan.

After adding $90 million to the city’s assessed valuation during each of 2019 and 2020, Crown Point will be adding $312 million to its valuation so far this year, the mayor said.

“We’re trying to expand how to get information to people,” said Adam Graper, noting that no one approach appeals to everyone. He directs the new program

Winfield, Crown Point and INDOT officials say 109th Avenue, starting at Randolph in Winfield and ending west at Broadway in Crown Point, should be fully open by Dec. 15.

Proposed plans for the Grand Ridge subdivision include building 189 homes on 87 acres at 10319 Grand Blvd.

The anticipated opening of the roundabout at Iowa Street and 109th Avenue has been stalled because of a delay in shipping lights needed for the project.

Work on the roundabout at 109th Avenue and Iowa Street in Crown Point nears completion, but the opening likely will be later this month, Mayor David Uran said.

Crews install masonry work on the sign at the roundabout at 109th Avenue and Iowa Street.