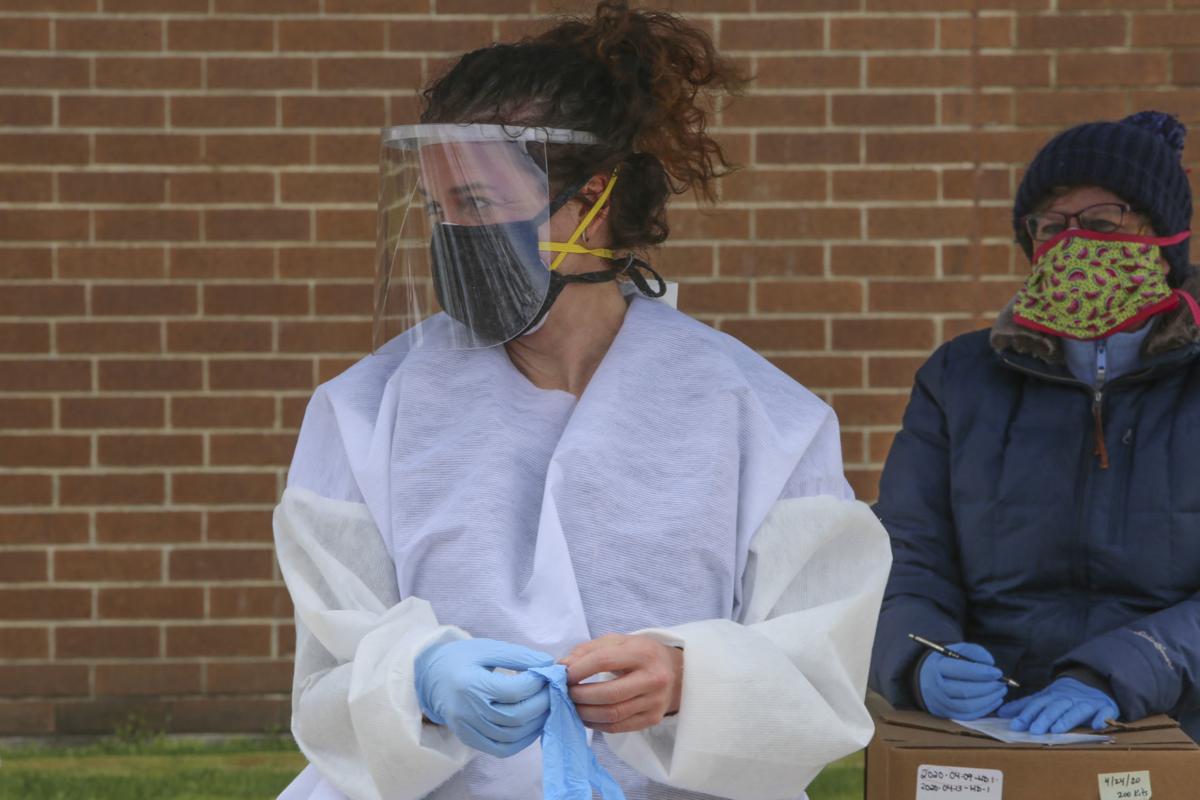 Jennifer KoSar, of the Indiana State Department of Health, changes gloves as she prepares to administer a COVID-19 test Monday in East Chicago. At right is Lynne Alameda, who also works with the state. 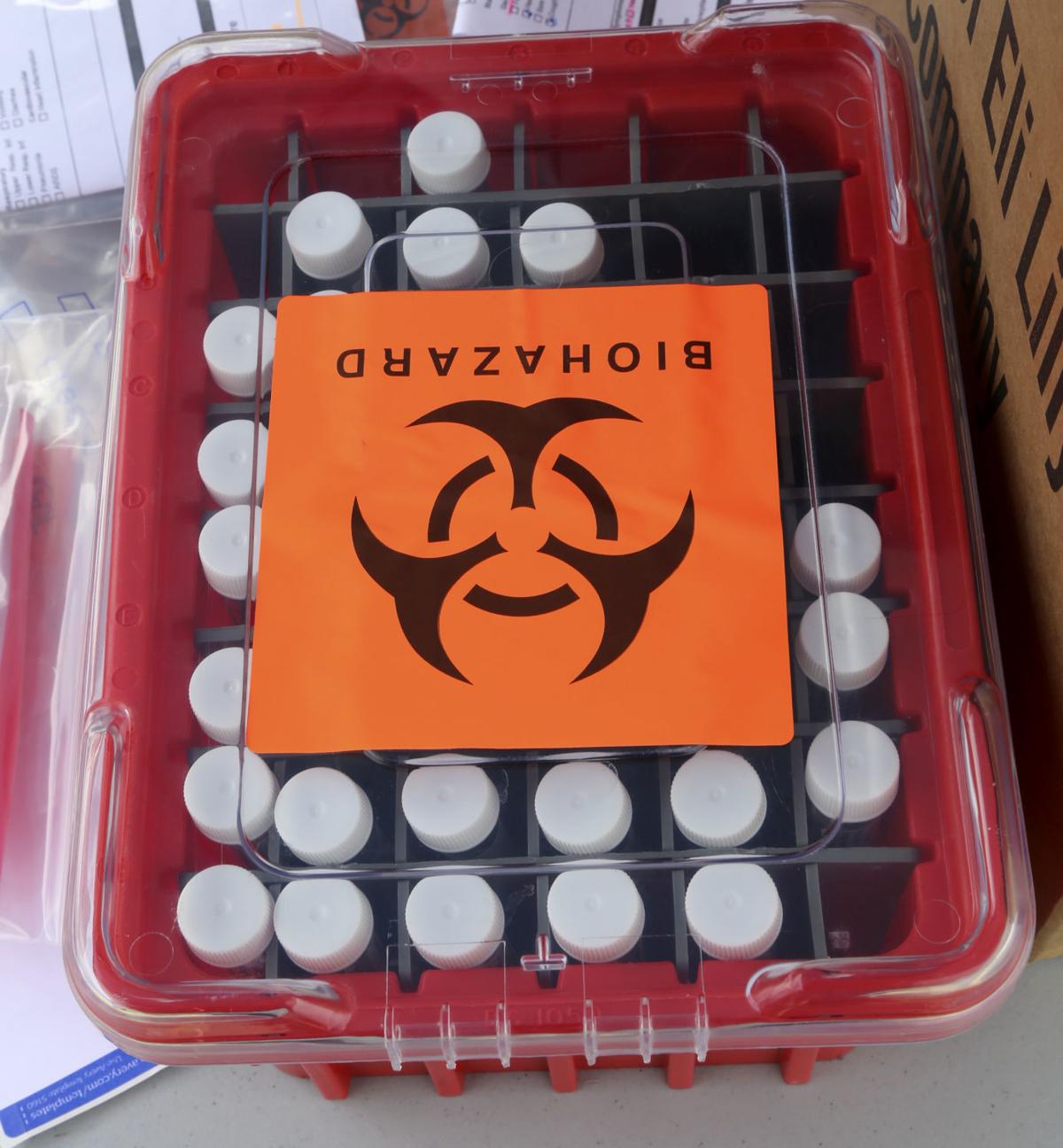 COVID-19 sample vials are seen May 4 in East Chicago, where the Indiana Department of Health offered a drive-thru testing site at Central High School.

Six additional COVID-19 deaths were reported Wednesday across Northwest Indiana, including three in Lake County, two in Porter County and one in LaPorte County.

The deaths bring the total number of deaths to 106 in Lake County, 10 in Porter County, nine in LaPorte County, eight in Newton County and one in Jasper County, according to the Indiana State Department of Health and county health departments.

The total number of Hoosiers who died after being diagnosed with COVID-19 rose by 51 to a total of 1,264, state and county data showed.

Another 113 deaths in Indiana were listed as probable, which means there was no positive test on record but a physician listed COVID-19 as a contributing cause based on X-rays, scans and other clinical symptoms.

Porter County, which has been releasing data independently from the state, said one of the deaths in its total was probable.

Three deaths in LaPorte County involved inmates at Westville Correctional Center, according to data posted by the Indiana Department of Correction. As of Wednesday evening, 66 Westville staff members and 166 inmates tested positive. No staff members have died due to the virus, reports said.

The additional deaths reported Wednesday occurred between April 20 and May 5.

A total of 21,870 Hoosiers have been diagnosed with COVID-19, an increase of about 4.1% from numbers reported Tuesday.

In Lake County, 72 additional confirmed cases were reported Wednesday, for a total of 2,233.

Gary and East Chicago each operate their own health departments.

Totals can be reduced is health officials determine a patient lives in another community.

That number includes 13 being treated at hospitals and 170 who have recovered.

LaPorte County had 284 cases, an increase of 11 from the previous day, according to data released Wednesday morning by the state. More than half of LaPorte County's cases involve inmates at the Westville prison, which has seen the number of cases level off during the past two weeks.

Newton and Jasper counties reported no change in case totals Wednesday, with 61 and 37, respectively.

State officials said 20 sites around the state opened Wednesday through a partnership with OptumServe in an effort to increase testing. Another 30 testing sites will be announced by next week, state officials said.

Symptomatic individuals can register online at https://lhi.care/covidtesting or by calling 888-634-1123. Clinics run Monday through Friday and include sites in Lake, Porter, LaPorte and Jasper counties.

Hoosiers will not be charged for testing and insurance is not required. If you have private health insurance, please bring that information with you, officials said.

The Lake County Health Department partnered with Methodist Hospitals and Opus Inspection Inc. to offer a drive-thru testing site this week at the emissions testing facility at 1231 E. Gostlin St. in Hammond.

Gov. Pritzker outlined a plan for re-opening the state as the threat from COVID-19 subsides.

Indiana is launching an online marketplace Wednesday to help reopening businesses get personal protective equipment, aiming to distribute 500,000 pieces of PPE this week.

Tuesday would have been Indiana’s primary election, but it was delayed until June 2 because of the pandemic.

While initial unemployment claims fell again in Indiana last week, they are still double the peak of the Great Recession.

The South Shore Line will start requiring passengers to wear a face mask Tuesday on trains and in stations.

“It was a lapse in my usual vigilance,” Holcomb said.

The Indiana Department of Environmental Management is currently accepting comments on NIPSCO's plan through May 22.

Jennifer KoSar, of the Indiana State Department of Health, changes gloves as she prepares to administer a COVID-19 test Monday in East Chicago. At right is Lynne Alameda, who also works with the state.

COVID-19 sample vials are seen May 4 in East Chicago, where the Indiana Department of Health offered a drive-thru testing site at Central High School.