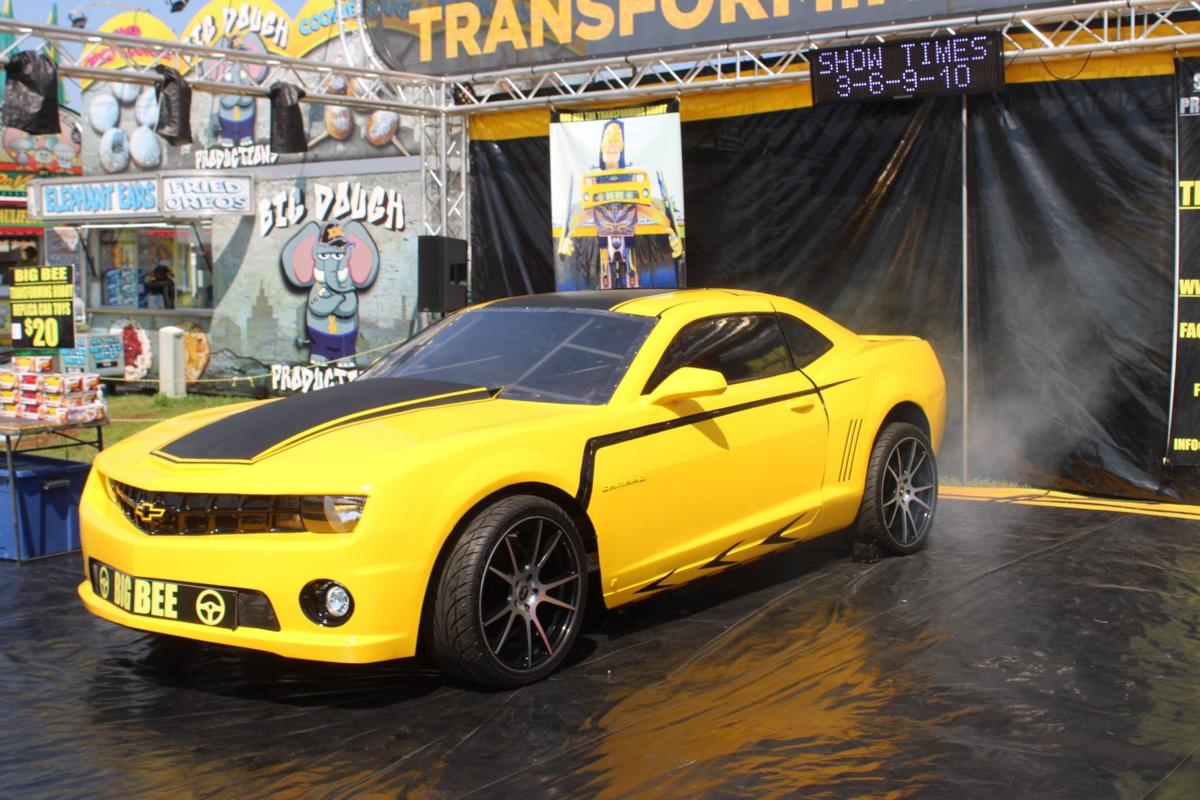 What looks like a Chevy Camaro transforms into a 16-foot robot in demonstrations offered daily throughout the Porter County Fair. 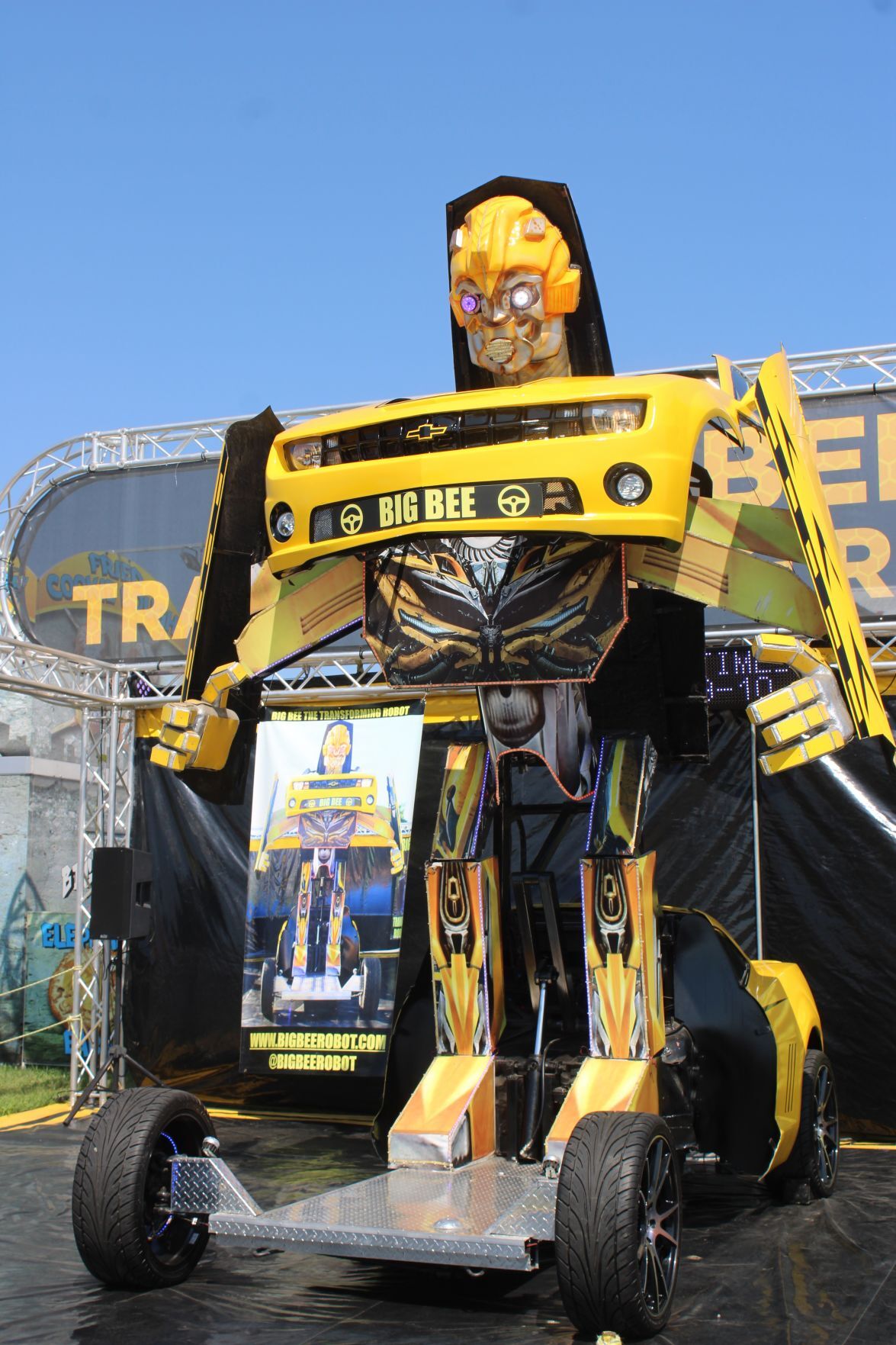 A 16-foot robot emerges from a custom made Transformers car at the Porter County Fair on Monday.

VALPARAISO — A lot of oohs and aahs came from the crowd as a car morphed into a 16-foot Transformers robot at the Porter County Fair on Monday.

The robot rose from underneath the body of what looked like a Chevy Camaro after what appeared to be smoke began rising from the tailpipe.

The noise of a loud engine revving and music similar to the theme from the movie “Jaws” began playing to heighten the intensity as the entire front end began lifting and the robot started to emerge.

The sounds of a police siren then blared as lights began flashing from the eyes of the robot standing tall above the audience.

Within minutes, the robot disappeared as the front end of the car began closing.

He brought his wife and three children from Manhattan, Illinois, to the fair and they made their way over close to the free entertainment tent to see the Transformer car in action.

“It was pretty exciting,” he said.

Melissa Garmon, of Valparaiso, brought her 13-year old daughter and 9-year old son along with friends.

They only caught the end of the show a few days ago and came back to watch the car transform from start to finish.

“It was good. The kids liked it. As long as they like it, it’s good enough for me,” Garmon said.

Peggy Irzyk, of Valparaiso, showed up with her husband, Jeff, because he wanted to see the car in action.

“I was impressed,” she said.

Actually, the yellow and black Transformers car was custom made from the body of a Volkswagen Beetle, owner Walter Murcia said.

Murcia said he and eight friends in Texas extended the frame to the size of a Camaro to provide room for the robot underneath the hood.

The body was made from sheets of fiberglass molded and cut into the shape and size of the panels of a Camaro.

Hydraulics and electric motors allow the robot to extend from beneath the hood and fold back down in what’s usually the engine compartment of a vehicle.

His friends made four other Transformers cars they also use at fairs and other shows, he said.

Murcia said a Volkswagen Beetle was used because the four-cylinder engine of that car is in the back and they wanted the robot to be underneath the hood.

“It looks like a Camaro, but it’s not a real Camaro,” he said.

Murcia said the car runs, but is not street legal because the windows were replaced by hard plastic which makes seeing out of them difficult.

The steering wheel, accelerator and brake pedal are also in the back.

He said the car was driven to the grandstands where country music singer Miranda Lambert performed a few days ago to allow more people to see.

Murcia said he created the car six months ago to provide his family another entertainment option to provide at fairs and other special events.

He’s the fifth generation in a family that also operates traveling circuses and high-wire acts.

They take their shows throughout the nation and other places like Canada, Japan, Jamaica and the Middle East.

“We always try to do something different,” he said.

Murcia grew up in South America and now lives in Florida.

He and his wife, Victoria, have four children, ages 6 to 23, who are also involved in the family business.

“They see the car. They think it’s real and they don’t expect it to transform into a robot. It’s really cool,” Murcia said.

Lyft driver Glynon Nelson, 38, of Crown Point, cooperated during the robbery, but one of the defendants shot him anyway, according to Lake Criminal Court records.

"I asked if there were weapons inside the vehicle and both replied no," according to the incident report.

When the hotel was closed, it was as if the staff just walked away at the end of the shift. A walk through the hotel last week showed its condition.

Authorities have identified the woman who died when a car and South Shore Train collided Friday evening in Gary.

What looks like a Chevy Camaro transforms into a 16-foot robot in demonstrations offered daily throughout the Porter County Fair.

A 16-foot robot emerges from a custom made Transformers car at the Porter County Fair on Monday.