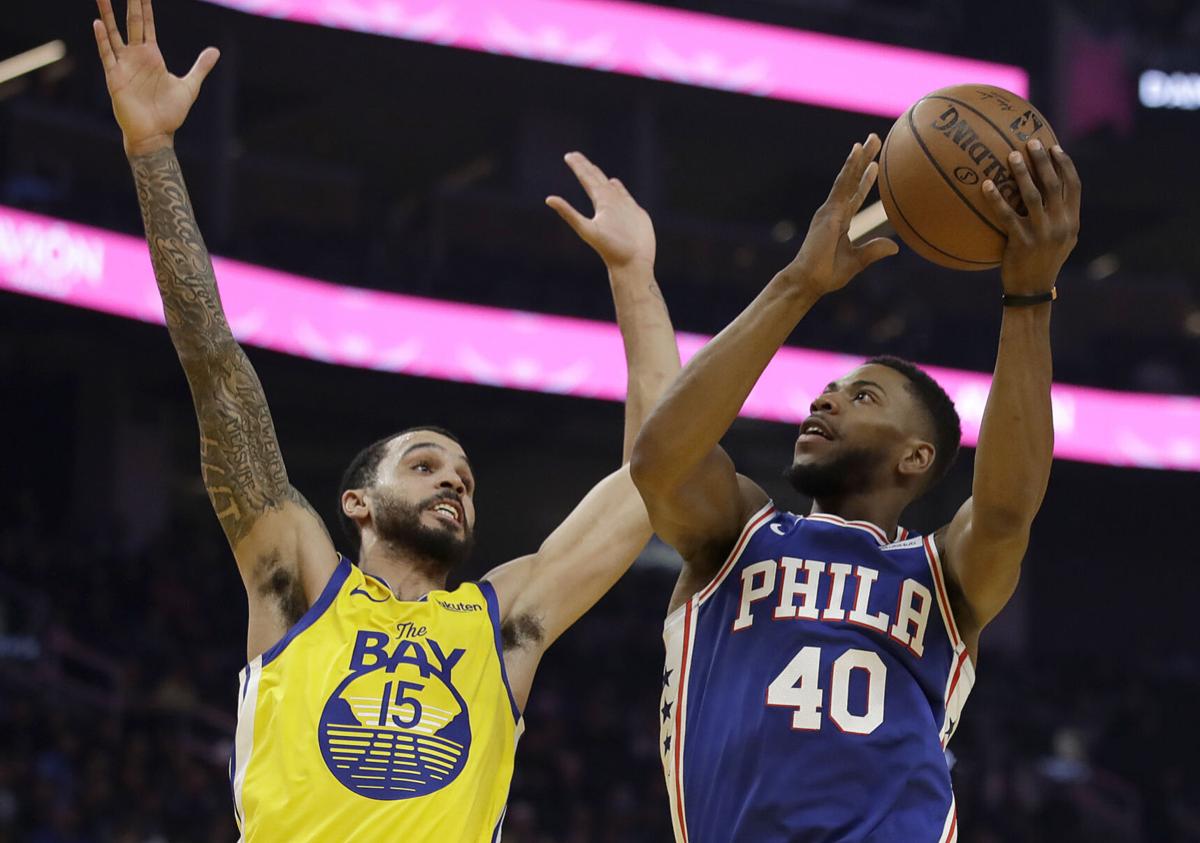 Philadelphia 76ers' Glenn Robinson III, right, shoots against Golden State Warriors' Michael Mulder March 7, 2020. Robinson had a breakout season with the Warriors before being traded to the 76ers, who he is no competing with in the NBA bubble. 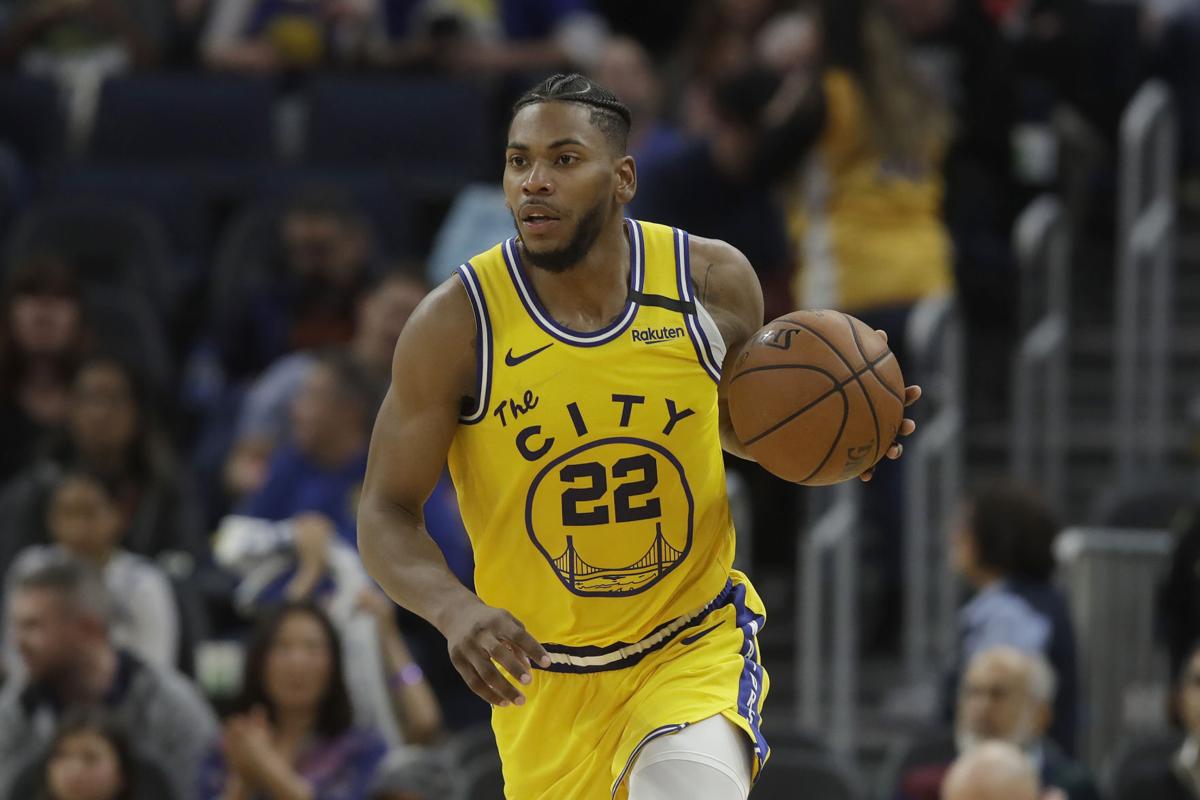 Glenn Robinson III bet on himself, moving to the West coast to make sacrifices for his NBA career and play with the Golden State Warriors. He got up to talk with his then-1-year-old daughter, Ariana, at 6 a.m. each day. His breakout season led to him being traded to the Philadelphia 76ers.

There has been a lot of time for team bonding at the restricted NBA bubble, which has given Gary native Glenn Robinson III time to get to know his new Philadelphia 76ers teammates.

It’s also given him an opportunity to ask them why they’re playing basketball.

“We all want to win a championship together, and that’s why we’re here, but why do you really play this game at the end of the day,” Robinson asked. “For me, that question is my family, my daughter and where I come from — Northwest Indiana.”

The returns echoed his sentiment. He is playing for his 2-year-old daughter, Ariana. Similarly, Robinson understands the difficult decision to play in the bubble or not.

Willie Cauley-Stein, his teammate at the beginning of the year in Golden State, opted out of the bubble to be with his newborn child, Robinson said in a recent interview with The Times.

“It’s crazy to see how important family is, and that’s one thing I can appreciate about the coronavirus and everything that’s happened that has made the world realize what truly matters at the end of the day,” said Robinson, who won the NBA Slam Dunk Contest in 2017.

Going back two years ago, it was a life-changing experience for Robinson to become a father.

“I thought my life was going to be one child, a son and he was going to play basketball, and then Ariana comes and she’s a girl and she really changed my life. She changed the way I look at women, changed my dedication to my game, my craft,” he said.

The Lake Central product is in his sixth NBA season and initially signed a one-year deal with the Warriors. He gave himself a leadership opportunity on and off the court with star guards Stephen Curry and Klay Thompson injured for most of the season, and Robinson got off to a career-best start. He averaged 12.9 points and 4.7 rebounds in 31.6 minutes per game starting 48 contests.

But it was a tough decision to leave the familiarity of the Midwest and go to the West coast, having played with the Pacers, Detroit Pistons and brief stints as a rookie with the Minnesota Timberwolves and 76ers.

“I sacrificed everything I ever had. I had never been across the country. I’ve always been a Midwest guy. Not only was I moving to the other side of the country but I bet on myself and my game, I bet on myself for my daughter and going through co-parenting,” he said. “I felt like this was what’s best for my career and I bet on that, and it worked.”

He even woke up at 6 a.m. local time just to speak with Ariana over the phone. That dedication has extended into the bubble where he’s grown the ARI Foundation, which he founded in June. ARI stands for Angels are Real Indeed.

Robinson was traded to the 76ers before the February trade deadline. When the league shut down in March due to the coronavirus pandemic, Robinson returned to his Indianapolis home and took two weeks off before ramping up his training regimen, knowing the 76ers had clinched a playoff spot while talks of a restart grew.

The league is underway with eight seeding games before the playoffs begin in the Orlando bubble on the Disney World campus. Robinson said upon arrival, he had to quarantine for 36 hours and is getting tested daily for COVID-19.

There are opportunities for the players to leave their hotel rooms, whether to play golf, fish or visit the other hotels’ restaurants, but Robinson has spent a lot of time to himself in-between practices and games.

He wants to take care of home. The Region. He typically puts on a free basketball camp for kids in Gary but he’s going deeper with the ARI Foundation.

“I have a massive amount of time to work on my passions and what makes me happy,” he said. “Our mission is to empower fathers and provide resources for fatherless families.”

He wants to “make sure we take care of home” by giving back to the Sojourner Truth House in Gary, which is a non-profit that serves the homeless, at-risk women and their children and underserved members of the community. They've also partnered with Brother's Keeper, a homeless shelter, and Geminus, which helps those with health care, in Gary.

Robinson missed Ariana’s first steps and first words because of his career, but he values the time they get to spend talking. The son of former Roosevelt star Glenn Robinson Jr. also wants his NBA colleagues to know they can be just as involved in their families’ lives.

“It’s an easy route to have a child with a professional athlete,” he said. “I grew up in the life of my dad (who) was the No. 1 pick. I was the son of a professional athlete. I see the potential as fathers that we do have in this league and the negative things that come with fathers in the everyday world. I wanted to find a way to empower fathers to let them know it’s okay to be involved in your child’s life.”

Robinson is donating $22 for every point he scores this season to the ARI Foundation, and the NBA is going to match his donation. He settled on $22 because he was wearing No. 22 playing for the Pistons when Ariana was born on March 22. To date, he’s scored 712 points.

He returned to the court Sunday after missing the first four seeding games with a bone bruise, he said. Robinson suffered the injury during a scrimmage at the bubble. He scored four points and grabbed three rebounds while playing 17 minutes in a 124-121 loss to Portland.

As for who Robinson is, and what is his why?

“I know that I’m a giver. I’m a person that’s going to take my gift — my God-given ability to be a professional athlete — and use it to help my community and where I come from,” he concluded.

And he plans to keep giving back to the Region.

“I haven’t found a place anywhere in the world that’s like where we come from, Northwest Indiana, and what we stand for,” he said. “I think that Gary, Indiana is a very strong city, it’s a city that is counted out (and) underrated much like me. It’s a city that just needs confidence and needs to be encouraged.”

Zach Plesac issued an apology after endangering himself and his teammates by violating his team's protocols put in place for the MLB restart.

“You’re not guaranteed another day. You never know what’s going to happen tomorrow, so why not put in your best effort and your best foot forward today?”

Tristan Wilcox aims to build something with PNW softball

“A good team culture is built on everything that you would want out of any relationship. Trust, honesty and communication, those are the building blocks between student athletes and coaches."

LAKE BUENA VISTA, Fla. — San Antonio’s record-tying run of 22 consecutive postseason appearances is over, with the Spurs being eliminated from…

"It’s such a blessing to be able to help the community I love so much."

Gary native Glenn Robinson III recently signed with the Sacramento Kings and discussed living on the West coast, a dunk contest challenge he's posed and giving back through the ARI Foundation.

In December Glenn Robinson III told The Times the Kings "had been calling since day one" of free agency and they "showed a lot of interest" in him. He is a Lake Central grad and native of Gary.

NBA veteran Glenn Robinson III, a Gary native and Lake Central graduate, is hosting an event honoring fathers for a day of fun with their children through the ARI Foundation.

Philadelphia 76ers' Glenn Robinson III, right, shoots against Golden State Warriors' Michael Mulder March 7, 2020. Robinson had a breakout season with the Warriors before being traded to the 76ers, who he is no competing with in the NBA bubble. 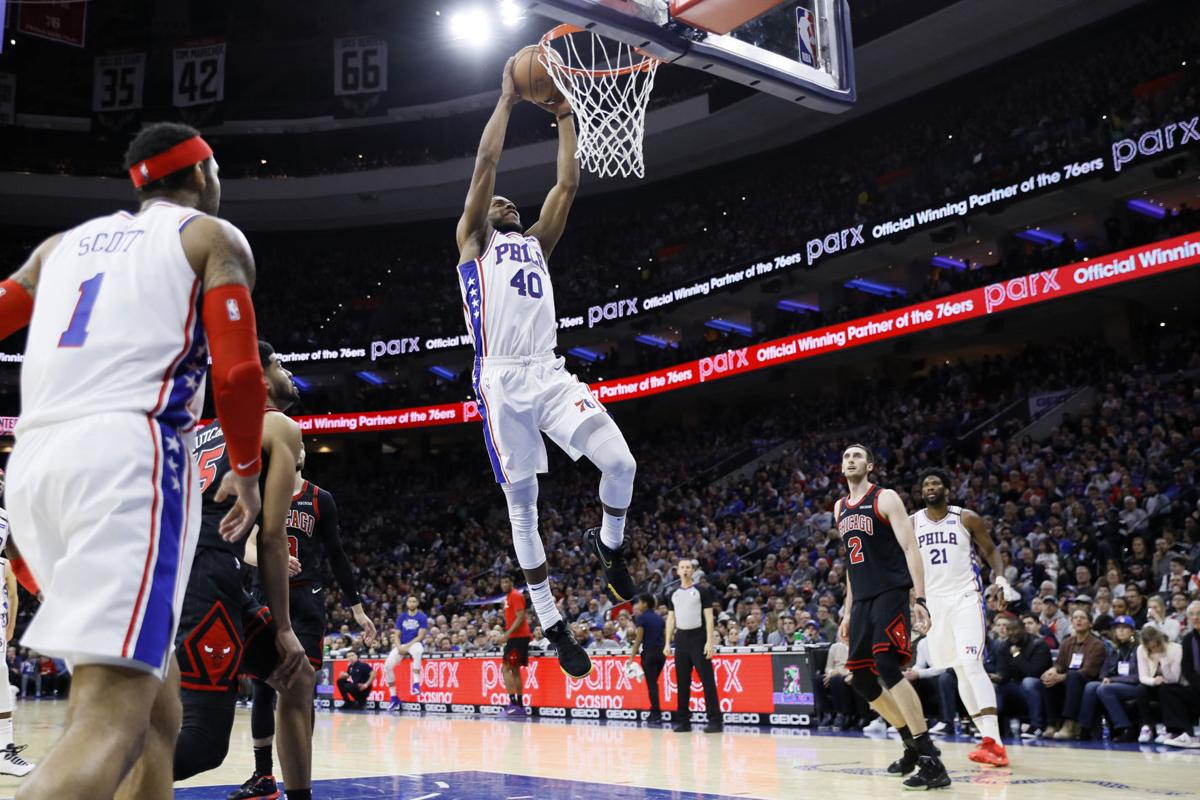 Philadelphia 76ers' Glenn Robinson III goes up for a dunk during the second half of an NBA basketball game against the Bulls Feb. 9, 2020. While in the NBA's restart bubble, Robinson has focused on himself and the ARI Foundation. 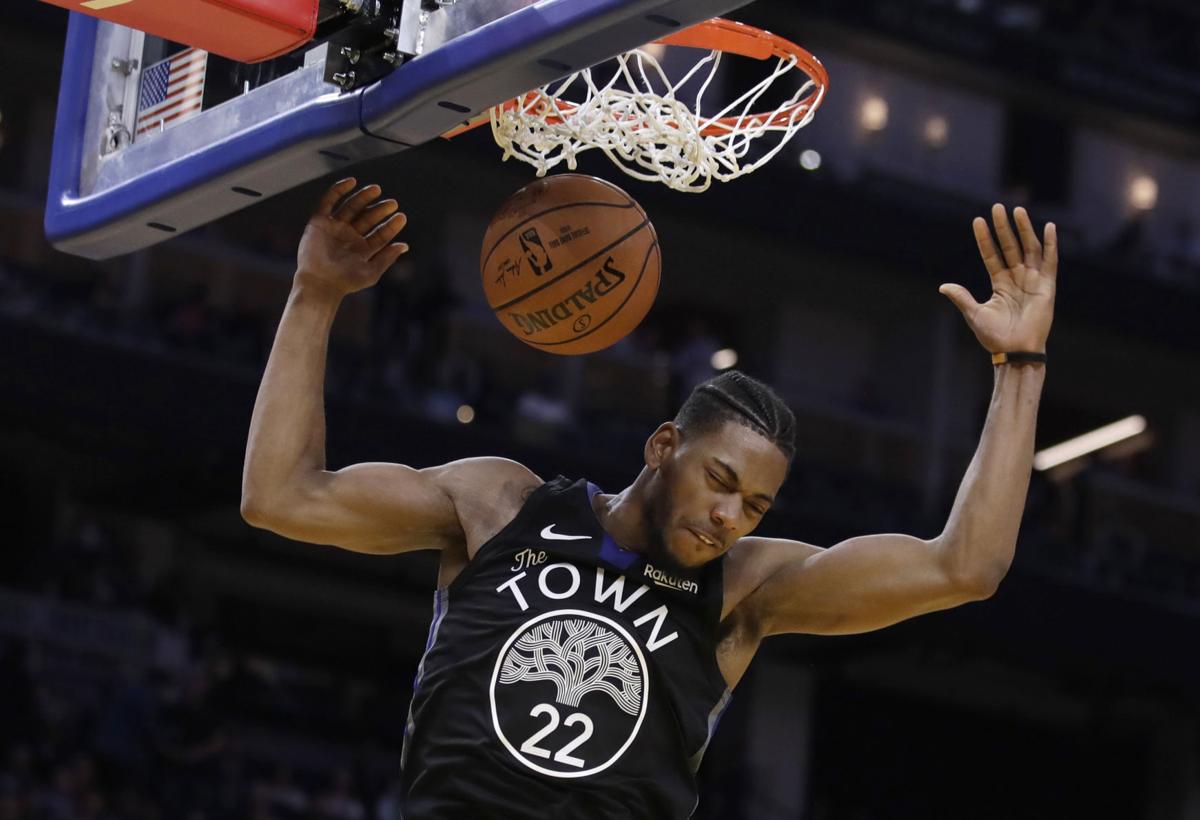 Golden State Warriors' Glenn Robinson III scores against the Dallas Mavericks Jan. 14, 2020. Robinson had a breakout season with the Warriors, causing the 76ers to acquire him for a playoff push. Inside the NBA bubble, Robinson has worked on his new passion, the ARI Foundation.

Glenn Robinson III bet on himself, moving to the West coast to make sacrifices for his NBA career and play with the Golden State Warriors. He got up to talk with his then-1-year-old daughter, Ariana, at 6 a.m. each day. His breakout season led to him being traded to the Philadelphia 76ers. 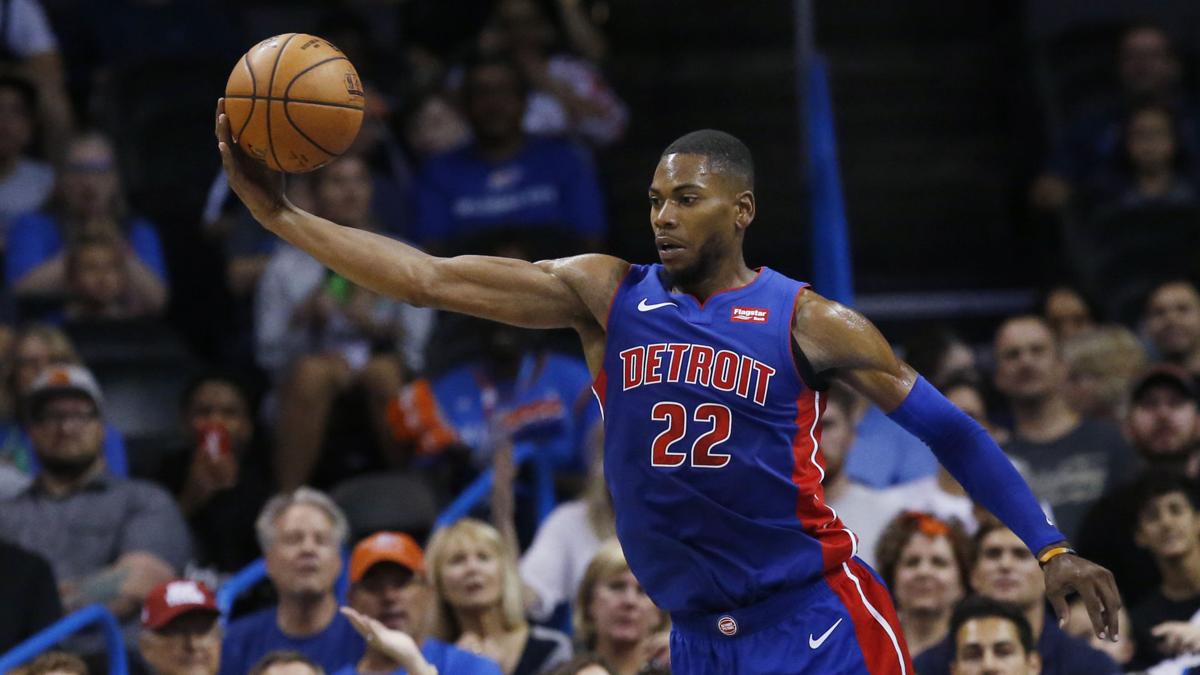 Detroit Pistons guard Glenn Robinson III half of an NBA preseason basketball game in Oklahoma City Oct. 3, 2018. Robinson is donating $22 to the ARI Foundation for each point he scores this season, and the NBA is matching his donation. He chose that price because he was wearing No. 22 with the Pistons when his daughter, Ariana, was born on March 22.