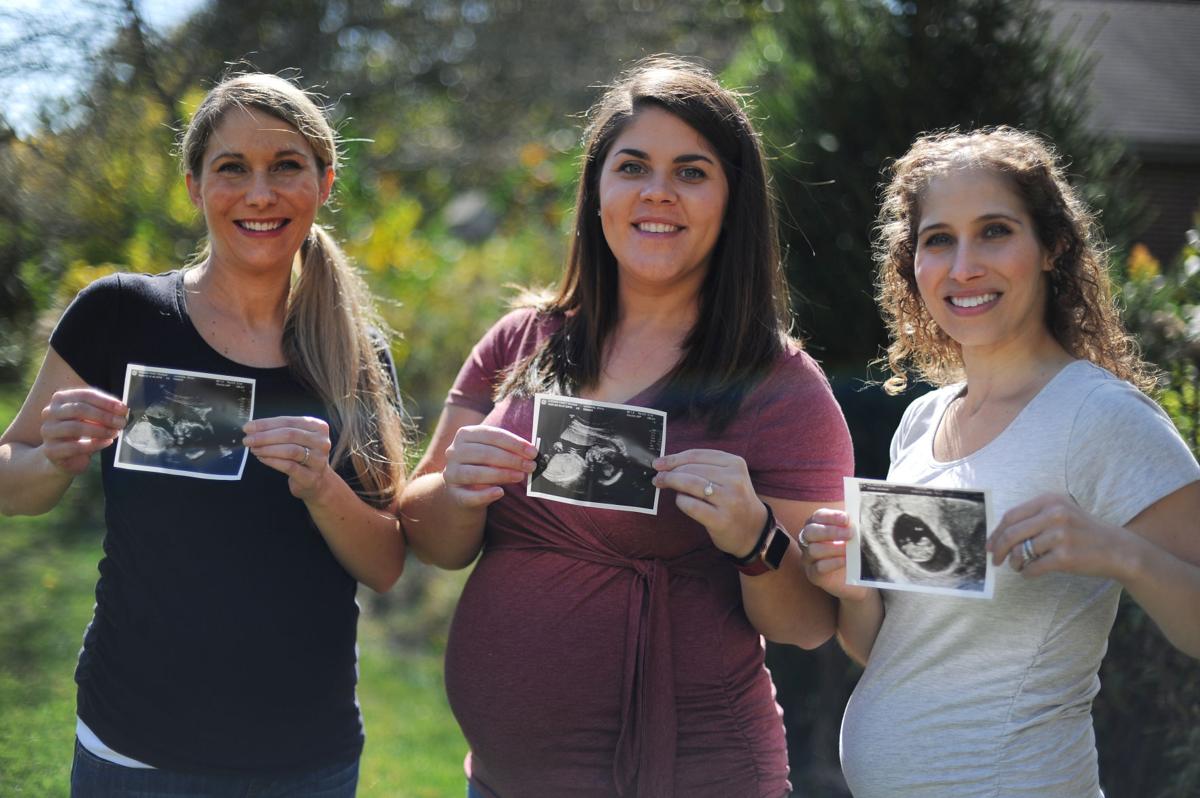 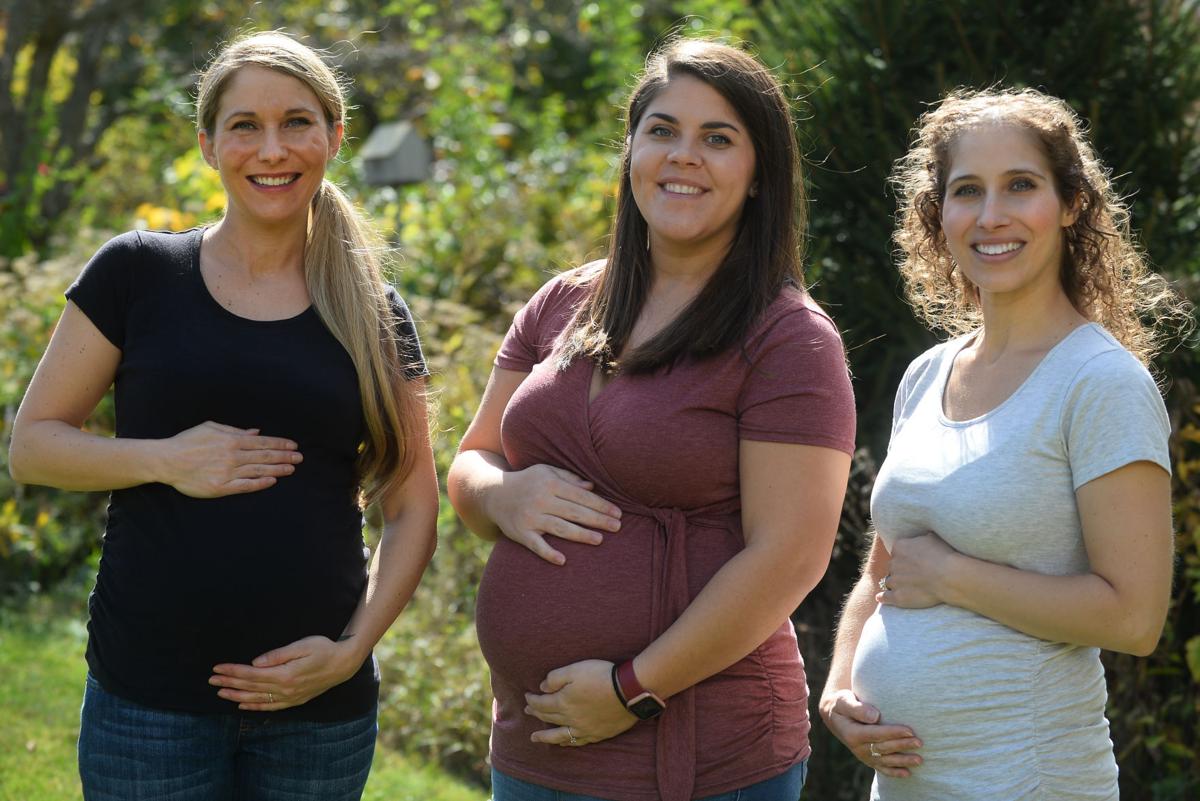 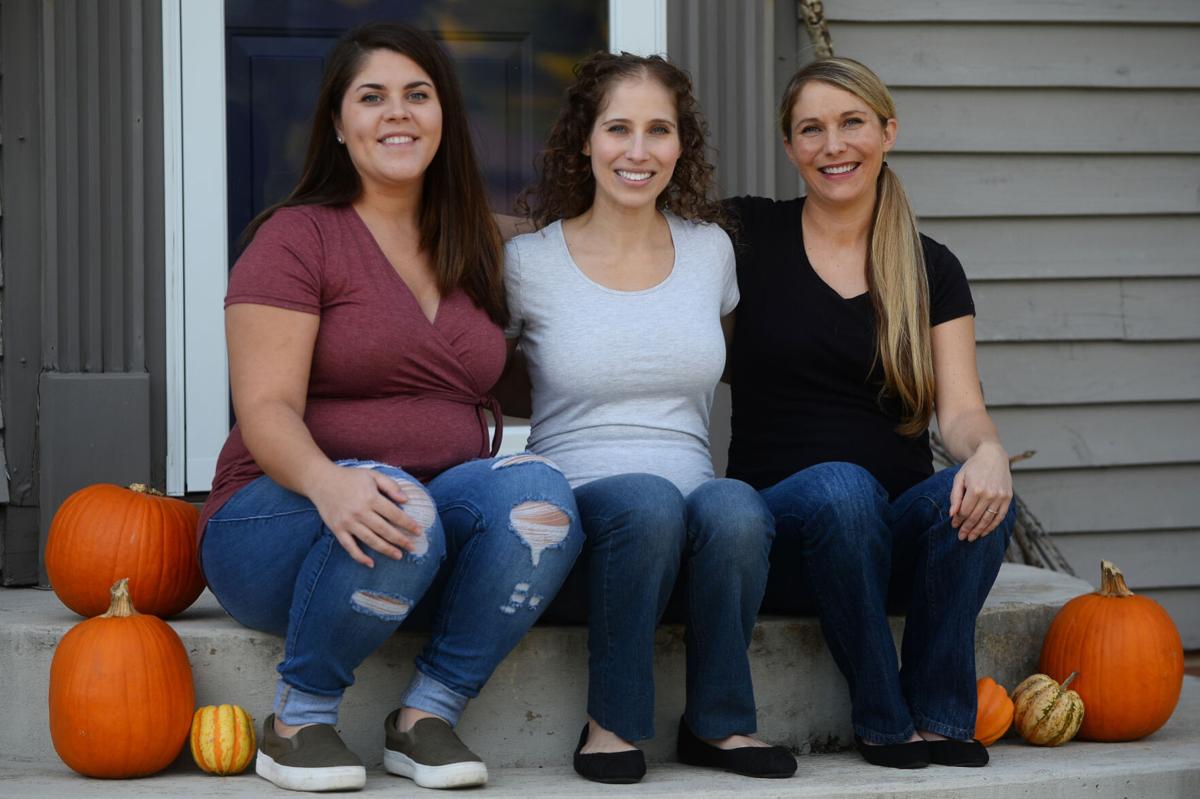 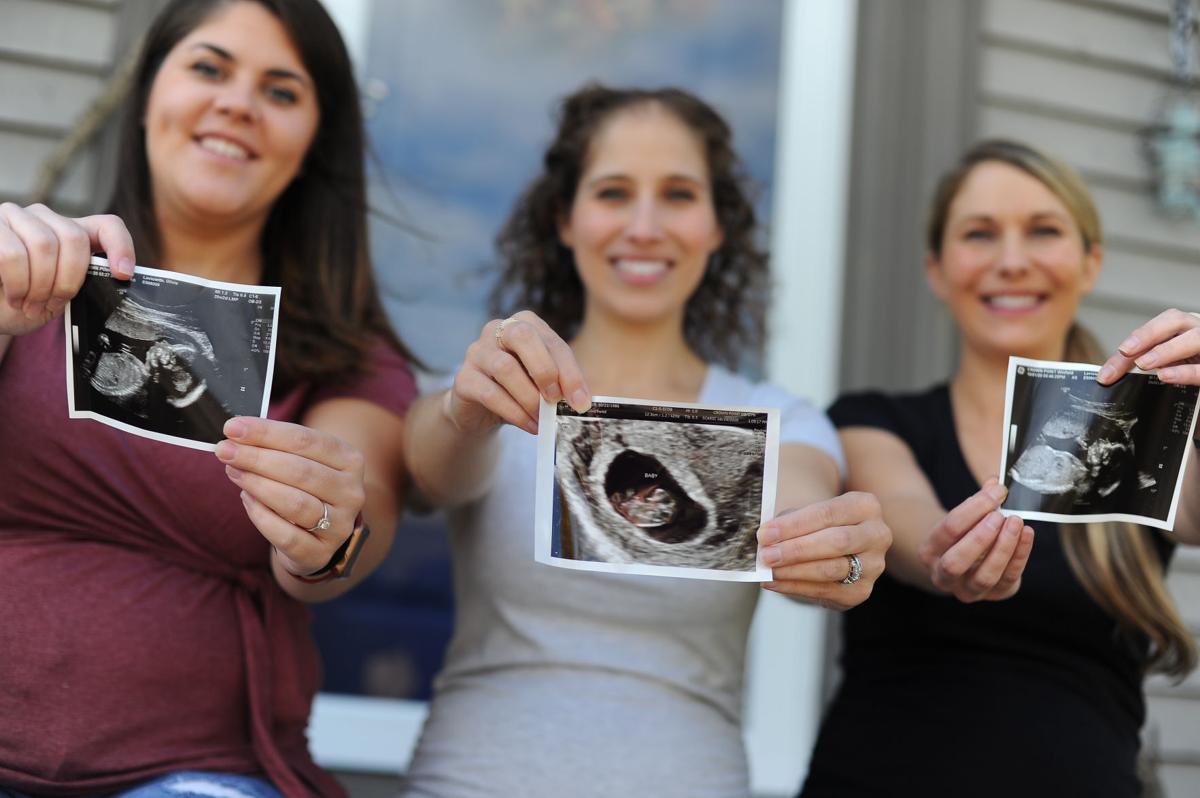 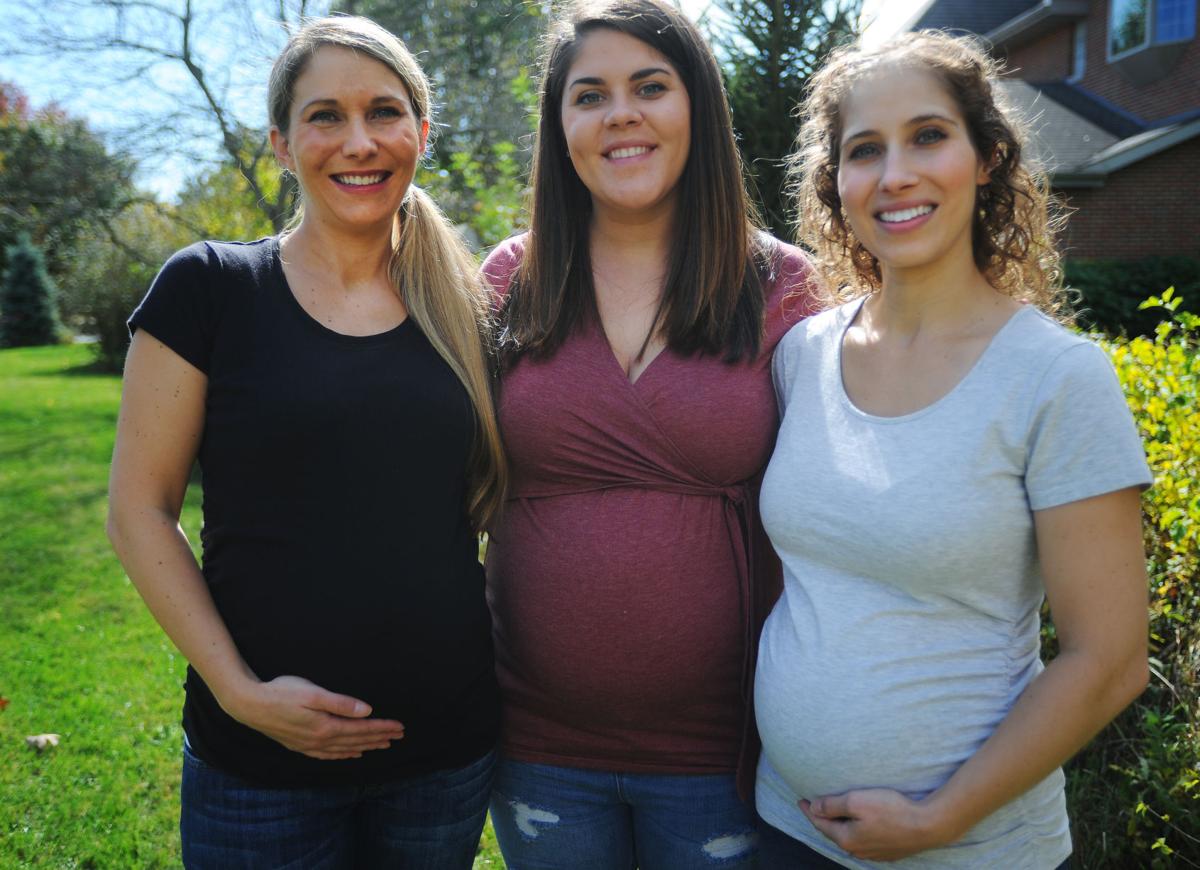 Sisters, (l to r) Tiffany McPherson, Olivia Laviolette and Chelsea Hill are expecting babies between late February and early March of 2021. McPherson is having her third child, Laviolette, her first, and Hill her second child.

CROWN POINT — Chelsea Hill, Olivia Laviolette and Tiffany McPherson always have been close, but none of the sisters expected how their relationship would change in the coming months.

Over the summer, one by one, they would discover they were pregnant with only weeks between their due dates.

With 11 years between the youngest and oldest, the sisters said they never imagined they'd all be pregnant at the same time. Hill's baby is due March 29, Laviolette's Feb. 16 and McPherson's Feb. 26.

"There were times in our lives where we each thought maybe two of us could be pregnant, but I don't think any of us ever dreamed all three of us could be," said Hill, 33.

Hill, who lives in Crown Point, said as she was looking for inspiration for her and her sisters to take photos of their bellies together, she realized how special the situation was.

"As special as I thought this was, it's even bigger than that. It just doesn't happen," Hill said.

The experience has brought the three closer together.

"We all knew that we were all trying, but Olivia and I had both been trying for a year; for quite some time. So, to both fall pregnant at the same time was unexpected," said McPherson, 39, who lives in Crown Point and is expecting her third child.

"It took me more than two years to have my first. I knew I was trying at the same time as them, but thought it was going to take a long time before it happened," added Hill, who is expecting her second child.

Laviolette, 27, who lives in Wheatfield, announced to family she was pregnant with her first child on the Fourth of July.

"I got my family and my husband's family together for a photo, and my friend was holding the camera, taking a fake video/photos, and she said, 'OK 1-2-3 say cheese and like 1-2-3 say Olivia is pregnant,'" Laviolette said. "The only people who knew were my siblings, and it was super cool to surprise my dad."

A couple of weeks later, Hill discovered she was pregnant, and a few weeks later she and McPherson told their dad they, too, were expecting.

McPherson said her sons, Jack and John, made a card for her father that included their handprints, as well as the handprint of Hill's daughter, Annabelle.

"He just thinks he's looking at a cute card from his grandkids with all their current stats and then as he flipped them we got to Olivia's in-the-womb baby and it was the size of a dragonfly," McPherson said.

"Then the next page it said something all about love, but wait there's more, and he turned that page and it said baby McPherson, and there was a little picture of a butterfly for mine."

Their father soon found out Hill also was expecting after he reopened the card and discovered another page.

Though the sisters agree they try not to focus on the negative, COVID-19 does present a challenge to their pregnancies.

For Hill and McPherson, both of whom already have children, it's been a different experience. No one is allowed to go with them to appointments, and only one person is allowed in the delivery room.

"I don't know that it's any harder for Olivia or me. I don't think it matters if you've experienced it the other way or not, but that's different," Hill said. "It hurts. It's unfair to not have (husbands) be a part of it and not have somebody be able to go in with you to those appointments."

McPherson said when she had her sons 10 years ago, she used to fill her time running errands. This time around, she won't do the same.

"I'm not going to take this baby to Target just for the hell of it. I would leave the baby at home," she said. "I'm realizing that I'm going to be stuck at home in a big way."

Laviolette added the way their children grow up likely will be different as they might not be able to socialize in the same way due to COVID restrictions.

The sisters have a Facebook Messenger group chat where they share updates with one another, which began when they were awaiting pregnancy test results, McPherson said.

These days, the sisters discuss symptoms they might be experiencing, share belly bump pictures and provide health updates. But the one bit of information they haven't shared is the sex of Hill's baby.

"I am, as they call it, team green. I didn't find out with my first if she was boy or girl until she was born, and I'm doing the same this time. These two don't have the patience for that," Hill said with a laugh.

Both Laviolette and McPherson are having girls.

"It's really neat for us to share not only the pregnancy journey, but we've also talked a lot about how neat it's going to be to all go through those stages (of life) at the same time," Hill said.

"Whether I have a girl or a boy, our three kids are going to grow up so close because they'll be pretty much the same age."

Michigan City is celebrating the addition of a new $100,000 fitness center to help inspire students to pursue healthy lifestyles.

School officials weigh in on COVID spread, thresholds for returning to remote learning

When should schools close again? Health and education officials say the answer is not so easy. Here's what we're learning about COVID-19 in schools and what educators are watching for as cases spike.

Lake County's top health official is asking residents remain vigilant during the COVID-19 pandemic amid an increase in local cases.

The city's water improvement projects have been moving along smoothly.

Sisters, (l to r) Tiffany McPherson, Olivia Laviolette and Chelsea Hill are expecting babies between late February and early March of 2021. McPherson is having her third child, Laviolette, her first, and Hill her second child.