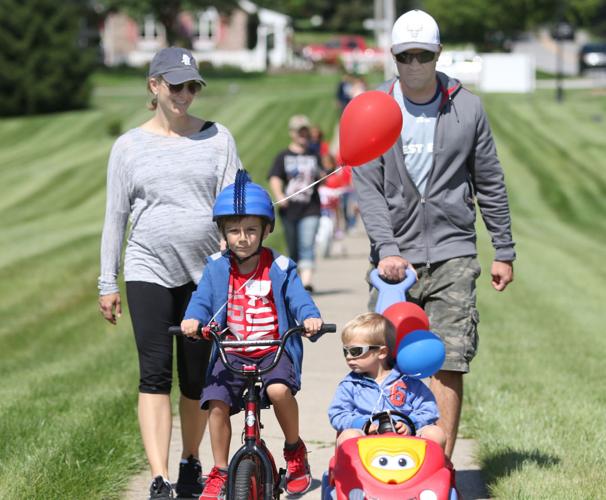 Families participate in a past Bicycle Parade for children to celebrate Independence Day in St. John. The town, with a population of roughly 17,000 residents, held onto the No. 1 spot in the 20 Safest Cities in Indiana 2019 report by SafeWise. 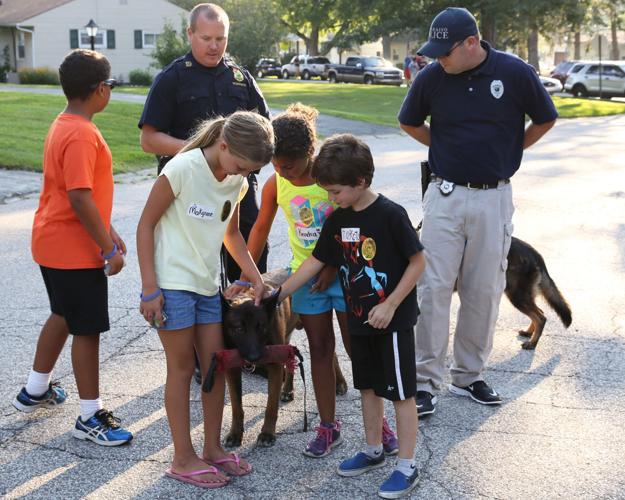 Valparaiso police Officers Jerame Simpson, left, and Joe Hall introduce children to their dogs Rico and Femmy during National Night Out in 2016. Valparaiso, along with several other Northwest Indiana towns and cities, were recently named the safest in the state.

Nine towns and cities in Northwest Indiana — many of which have made the annual list more than once — have been named some of the safest places in the state, according to a recent safety research report.

St. John, with a population of roughly 17,000 residents, held onto the No. 1 spot in the 20 Safest Cities in Indiana 2019 report by SafeWise, a professional website that tests, reviews and compares home safety products and home security companies.

The rankings are based on 2017 (the most up-to-date) FBI crime report statistics and census population data, according to SafeWise. The report focuses on violent crimes — aggravated assault, murder, rape and robbery — per 1,000 people in each town/city. If there is a tie, the number of reported property crimes — burglary, arson, larceny-theft and motor vehicle theft — is factored.

St. John Police Chief James Kveton said he is proud the community has been recognized not only locally, but also nationwide. According to SafeWise’s recent 'Safest Cities in America' report, St. John is the 19th safest town in the nation.

“I would like to praise the officers that are out on the streets every day for this town. I am proud of the work they do and the citizens for reporting and letting us know when they see anything out of place,” Kveton said. “It takes all of us to be where we are.”

St. John had a .12 violent crime rate and 8.35 property crime rate, according to SafeWise.

More than half (51 percent) of all calls were related to traffic. Citizen assists counted for 30 percent, with the remainder relating to ordinances, people, property and juveniles and assisting other agencies, including fire and EMS.

There were 303 total arrests and 490 criminal charges.

"The arrests and criminal charges went up nearly 20 percent. It's an area that is continuing to grow as we stay vigilant," Kveton said, adding that the town rarely sees violent offenses and property crime is the most prevalent.

Dyer officials also have great pride in their town’s safety ranking. In addition to making the state’s list, Dyer is ranked as the 68th safest in the nation.

“We are ecstatic that we could rank so high. It tells us that we are doing something right here,” Dyer Police Chief David Hein said. “We take crime personally and want our town to be deemed as safe.”

Hein said the department, made up of 31 officers, responds mostly to traffic and theft calls.

According to the Police Department’s 2018 annual report, there were 495 total accidents reported. The top three types of collisions were rear-ending, backing up and right angles. One fatality was reported with the traffic accidents.

Of the more than 10,000 total law incidents to the Dyer Police Department, 154 theft incidents were reported, which included identity, firearms, auto and theft from a vehicle.

Hein attributes the safety ranking to the department’s proactive tactical patrol unit, which focuses specifically on crime prevention. By increasing manpower during in the afternoon shifts, law enforcement has been able to ultimately deter crime, he said.

Crown Point Mayor David Uran recently took to Facebook to share the news of the city making the state’s ranking as the fourth-safest.

Uran contributes the positive results to the public safety division led by “outstanding and dedicated police and EMA officers.”

“Although I'm pleased with the recognition and proud of the commitment and hard work of our police officers, I realize that working to keep Crown Point as the great city that it is requires a strong partnership between our citizens and Police Department,” Land told The Times. “Our citizens do a great job in serving as the eyes and ears of the city.”

With a population of roughly 29,000, Crown Point had 0.34 violent crime rate and 11.33 property crime rate, according to SafeWise.

Ranking as most safe town in Porter County and seventh in the state, Chesterton has a 0.59 violent crime rate and 8.67 property crime rate, according to SafeWise.

“While no community that I know of can or will experience complete isolation from criminal activity, the residents of Chesterton and visitors to our community can be and feel relatively safe and tranquil living in and visiting our community,” Chesterton Police Chief Dave Cincoski said. “The Police Department staff takes the safety and security of our community seriously and endeavors to deal with any issues proactively.

Northwest Indiana can be self-deprecating at times.

EDITORIAL: Shameful saga of nonprofit thief John F. Kmetz must be forced to an end

EAST CHICAGO — The U.S. 12 (Indianapolis Boulevard) bridge over Lake George Canal will close next week through the end of June.

DYER — The hunt is over. A location has been selected and approved for the future development of Dyer Fire Station 2.

CROWN POINT —The city was recently awarded nearly $1 million from Indiana’s Community Crossing Grant and for Mayor David Uran, the funding is …

DYER — Residents had one item on their agenda for the Dyer Town Council Thursday night — move Fire Station 2 somewhere else.

One of the fastest-growing, safest and most desirable communities in the state didn't get there by accident.

DYER — The Dyer Fire Department is asking for the community’s help to restore a historic fire truck.

HOBART — A back-and-forth between Hobart police and Family Express has been ironed out following a blip in an armed robbery investigation.

CROWN POINT — The No. 2 official at Lake County 911 has been fired, according to Director Mark Swiderski.

More than a year after a mass shooting at a high school in Parkland, Florida, police say students and parents are “on edge” and “alert,” yet i…

CROWN POINT — It was a packed house Wednesday in the Crown Point Council Chambers as the city swore in its newest police officer.

The groundhog poked his head up to start the new year and didn’t see any shadows of doom and gloom around, so he predicted another year of eco…

Families participate in a past Bicycle Parade for children to celebrate Independence Day in St. John. The town, with a population of roughly 17,000 residents, held onto the No. 1 spot in the 20 Safest Cities in Indiana 2019 report by SafeWise.

Valparaiso police Officers Jerame Simpson, left, and Joe Hall introduce children to their dogs Rico and Femmy during National Night Out in 2016. Valparaiso, along with several other Northwest Indiana towns and cities, were recently named the safest in the state.