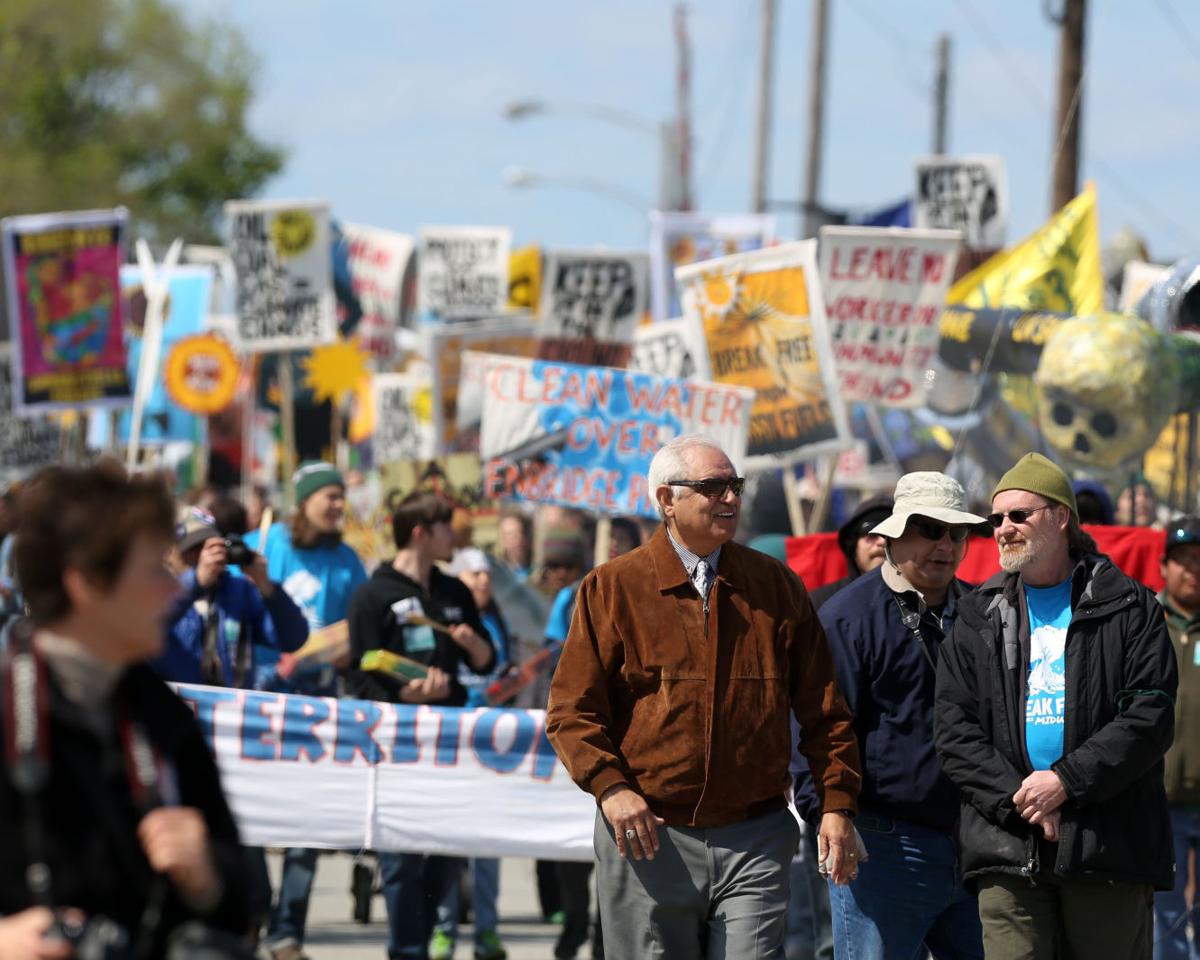 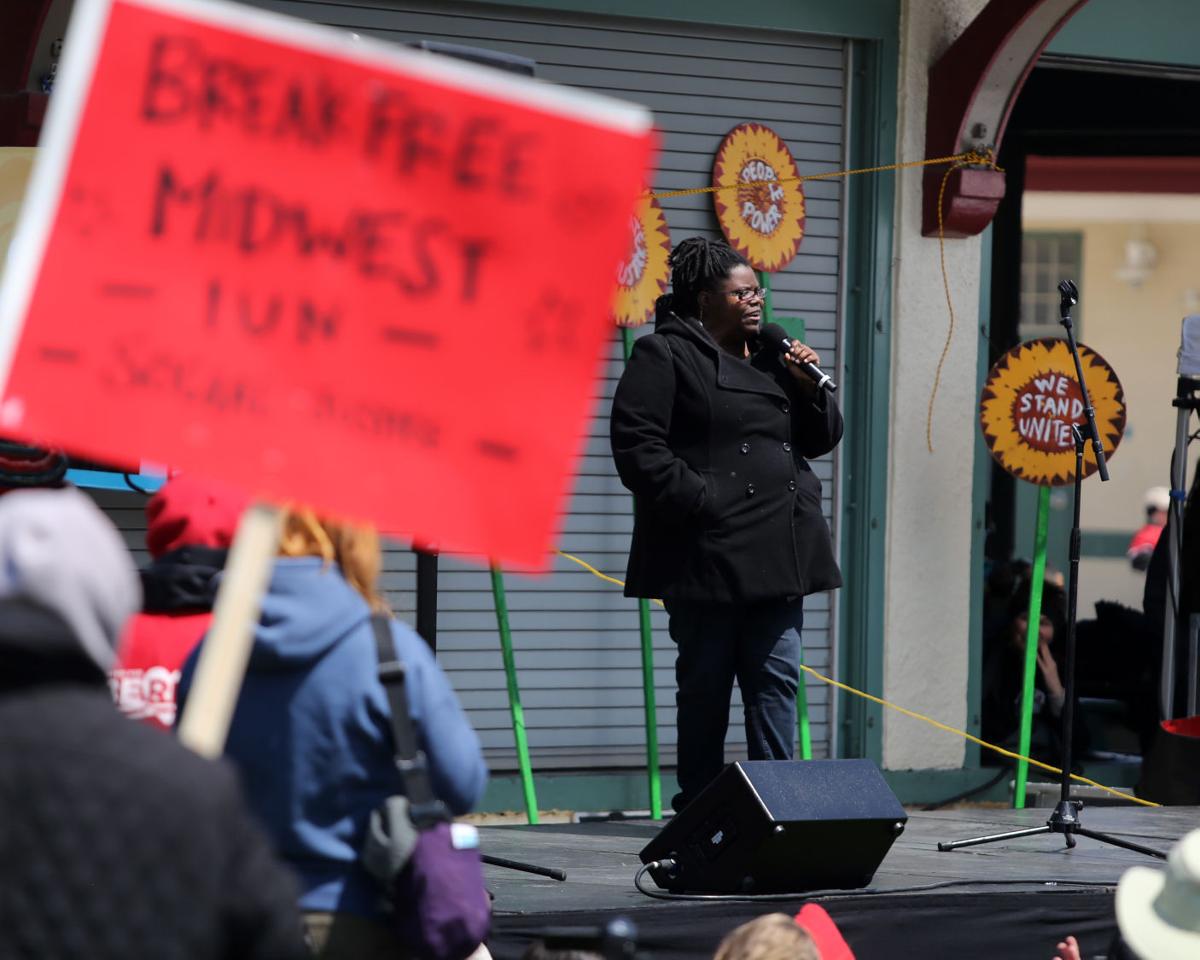 Black Lives Matter-Gary representative Lorrell Kilpatrick, of East Chicago's New Addition neighborhood, talks Sunday at a rally in Whiting about protecting the environment from the fossil fuel industry. Black Lives Matter-Gary and other groups recently won — for now — a fight to keep the for-profit prison company GEO Group out of Gary, she said. 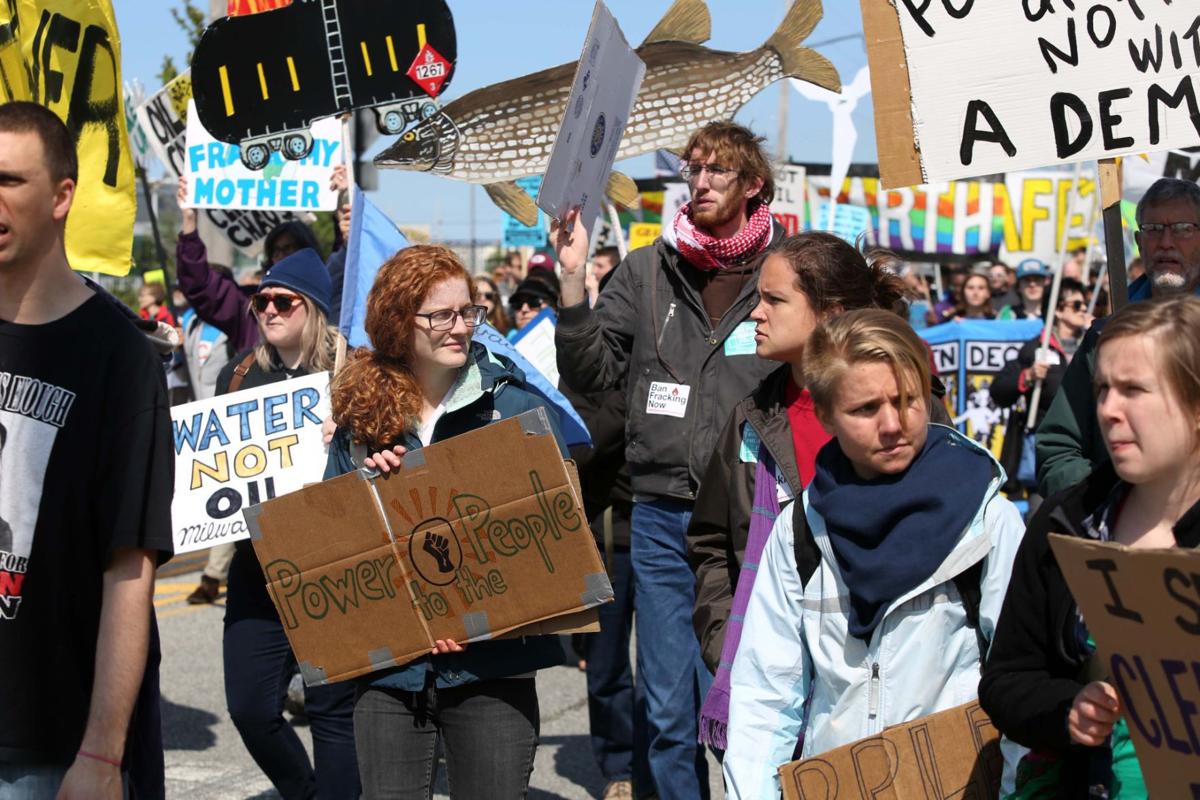 Protesters march Sunday in Whiting as part of the Break Free from Fossil Fuels protest. 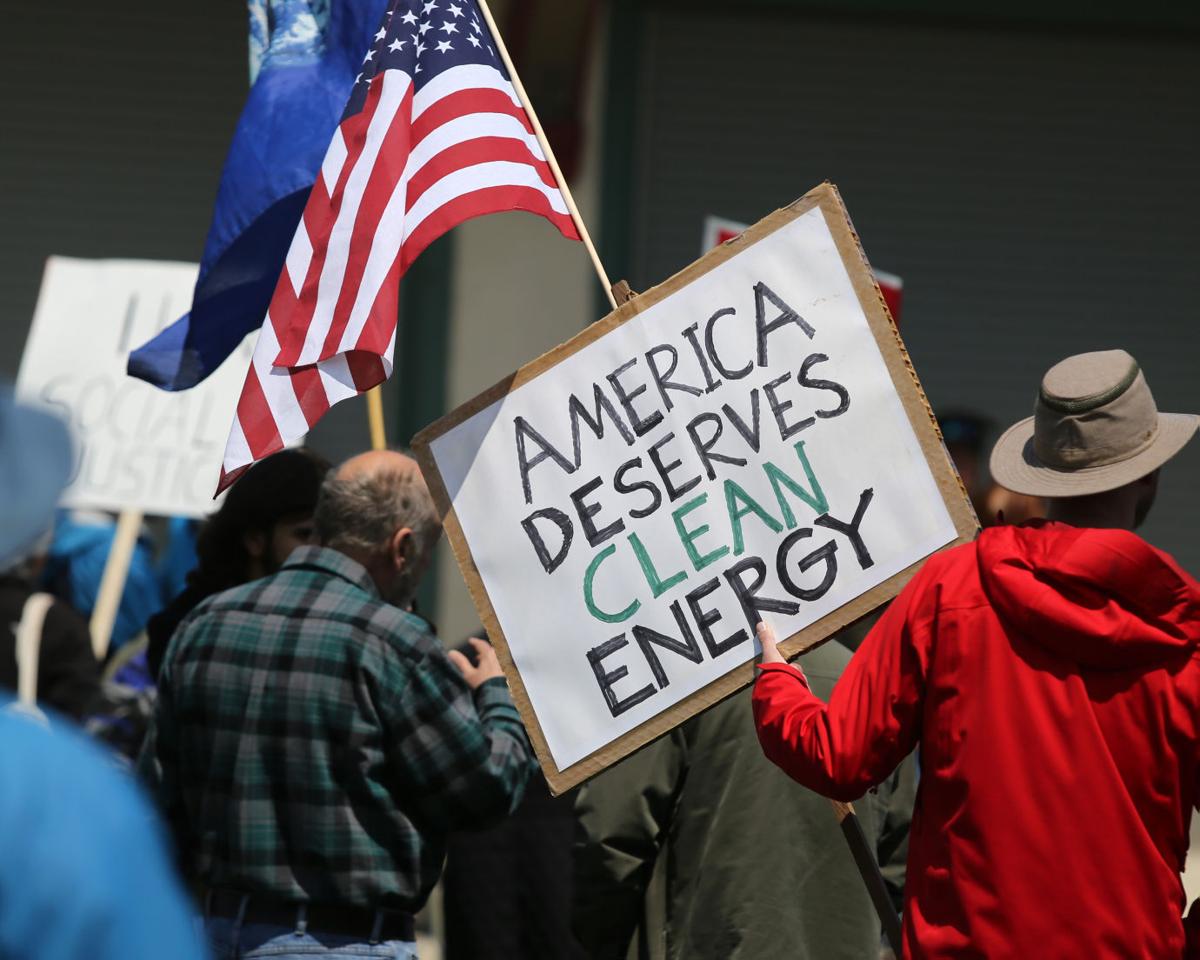 One day after being arrested outside the BP Whiting Refinery, East Chicago resident Thomas Frank said the sit-in was a way to show others he and the 40 other protesters taken into custody are ready to stand and fight.

Residents in northern Lake County bore the burden of industrial pollution for more than 100 years, and it's time for a "just transition" to more renewable energy sources, Frank said.

Tens of thousands of steel jobs have been lost in the Region since the 1970s, and "front-line communities" like East Chicago and Gary have suffered enormously as heavy industries transferred wealth away from them, he said.

A just transition means ensuring workers currently earning a living wage move into a new industry that also pays a living wage, he said. It also involves demanding industries pay to clean up the lands they've contaminated so they can be put to better uses, he said.

Climate change is happening, and people will increasingly feel the pressure, Frank said.

BP spokesman Michael Abendhoff said the company respects the people's right to protest. He didn't respond to a call seeking comment on specific criticism by protesters.

Whiting Police Chief Stephen Miller reported no problems during the Break Free from Fossil Fuels rally at Lakefront Park and subsequent march to BP. He said the protest was peaceful.

"It was really smooth," he said. "I guess they got their point across.

"When I had meetings with the organizers, we told them we had no intention of arresting them. We wanted them to have a good time."

Authorities received information that a group not involved in the protest Sunday might try to lie on railroad tracks in the area, but no incidents were reported, Miller said.

Activists in Washington state and New York blocked trains to protest shipment of crude oil as part of the global Break Free from Fossil Fuels campaign.

Domiguez negotiated with police outside Gate 15 at the BP Whiting Refinery on behalf of the protesters. The 41 who were arrested initially separated themselves from the larger group, and police eventually allowed them to sit in front of the gate for a short time.

The group walked onto BP property holding hands, formed a circle and sat down. An officer in riot gear identified himself and ordered them off the property. The 41 protesters sang.

After three warnings, police surrounded the protesters and began leading them away one by one to waiting prisoner transport vans.

Domiguez said officers in riot gear surrounded the group during the arrests just in case anyone who was not part of the sit-in attempted to do anything "out of the ordinary."

Police shook hands with Domiguez and protest organizers after the arrests, and Dominguez said officers were "very cordial."

The group was taken to the East Chicago Public Safety Facility to be processed. Police sent them there instead of the Whiting Police Department because it's a bigger facility, officials said. Each protester was booked on a misdemeanor charge of criminal trespass and released Sunday night.

Police records show three of those arrested were from Lake County. Another three were from elsewhere in Indiana, 11 were from Illinois, three from Iowa, four from Michigan, 11 from Minnesota, one from Tennessee, four from Wisconsin and one from Washington state.

Frank responded to criticism that protesters used fossil fuels to get to Whiting by saying they would have used other means to travel if available.

"Ninety-seven percent of transportation is dependent on fossil fuels," he said. "We would love that not to be the case. What we're trying to do is put the pressure on to change that scenario."

Industry has the money to hire lawyers, write laws and lobby Congress, he said.

"We have people power on the ground, and so we're trying to bring that out. What we brought out, we organized through the Great Lakes region. That includes people from Northwest Indiana and the Southeast Side of Chicago."

Sunday's protest was no different than what local activists accomplished earlier this month when the Gary City Council voted down a proposal from the GEO Group to build a for-profit immigrant detention center near the Gary/Chicago Airport, he said.

"We are both fighting billionaires that are taking advantage of low-income communities of color that are least able to defend themselves politically or economically," he said.

HAMMOND — A Lansing man faces a federal firearms charge after tussling with Hammond police investigating a report of a man with a gun, court r…

Black Lives Matter-Gary representative Lorrell Kilpatrick, of East Chicago's New Addition neighborhood, talks Sunday at a rally in Whiting about protecting the environment from the fossil fuel industry. Black Lives Matter-Gary and other groups recently won — for now — a fight to keep the for-profit prison company GEO Group out of Gary, she said.

Protesters march Sunday in Whiting as part of the Break Free from Fossil Fuels protest.