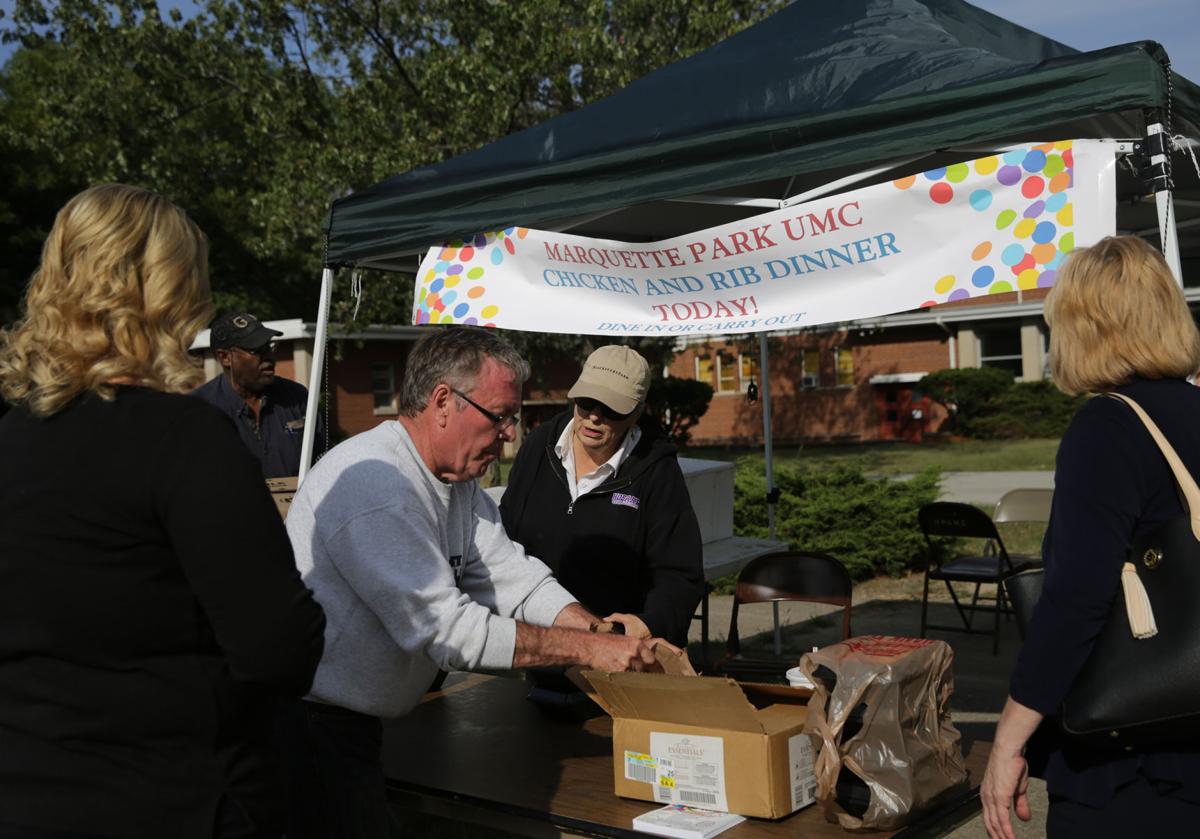 Volunteers sell meals to customers during a chicken and rib dinner on a recent Friday at Marquette Park United Methodist Church in Gary. 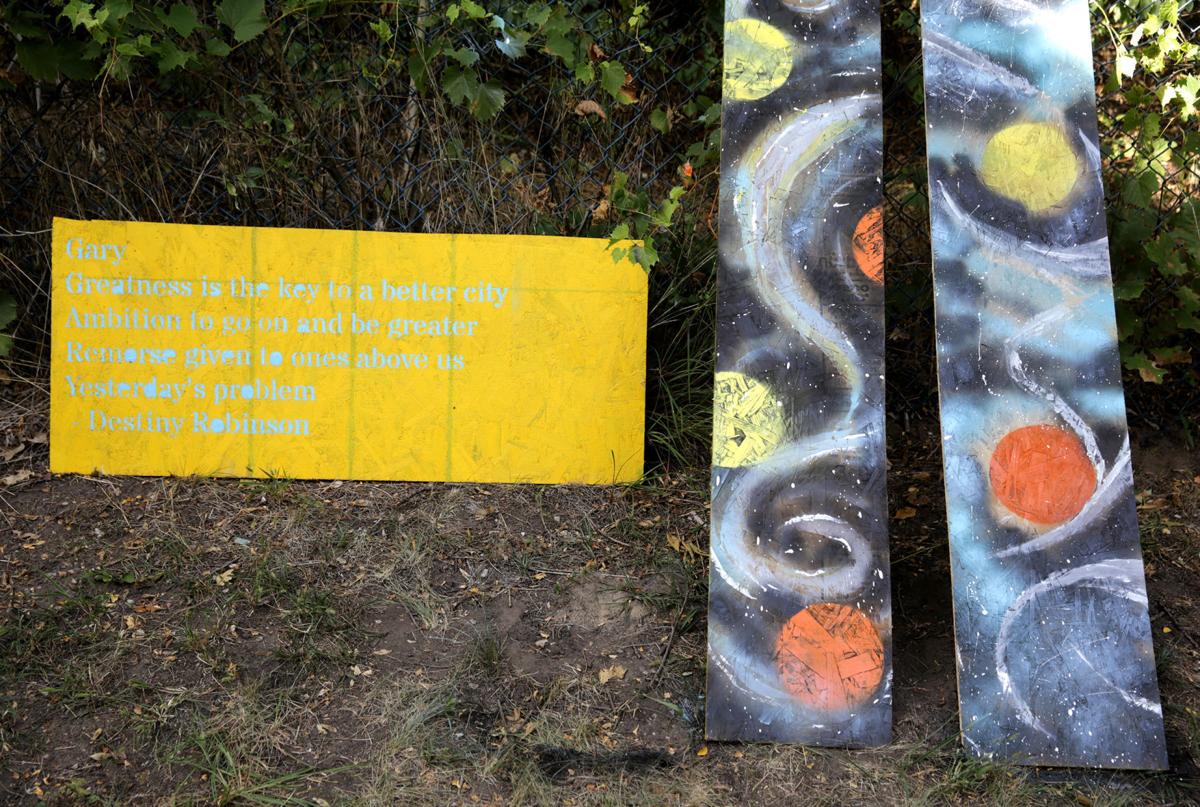 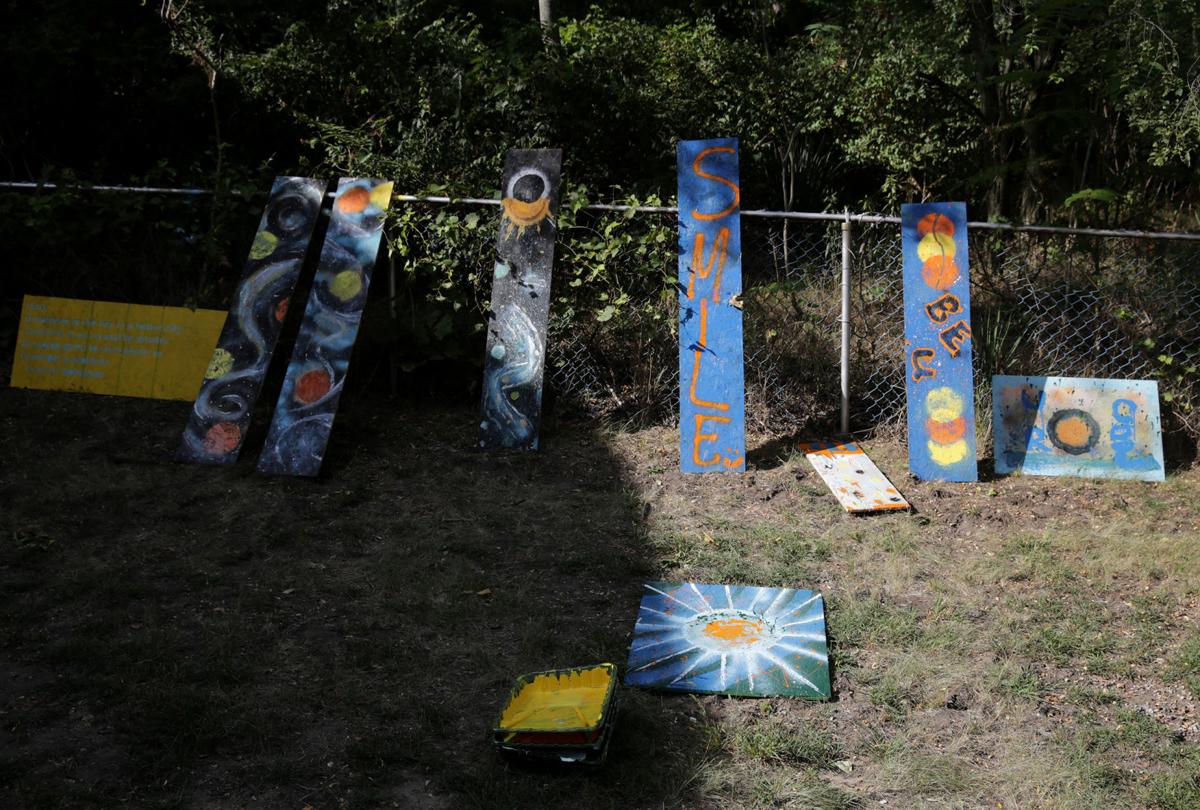 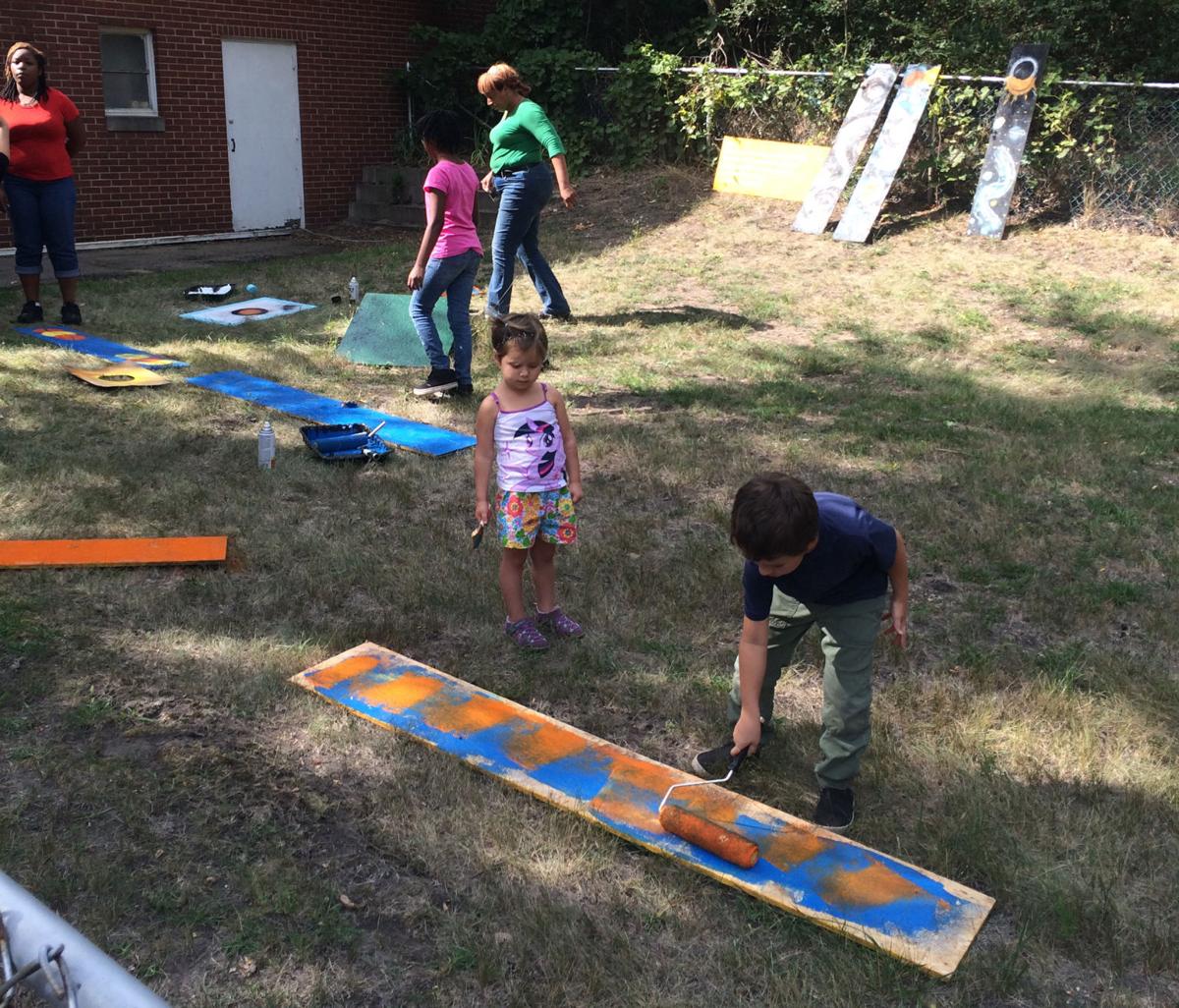 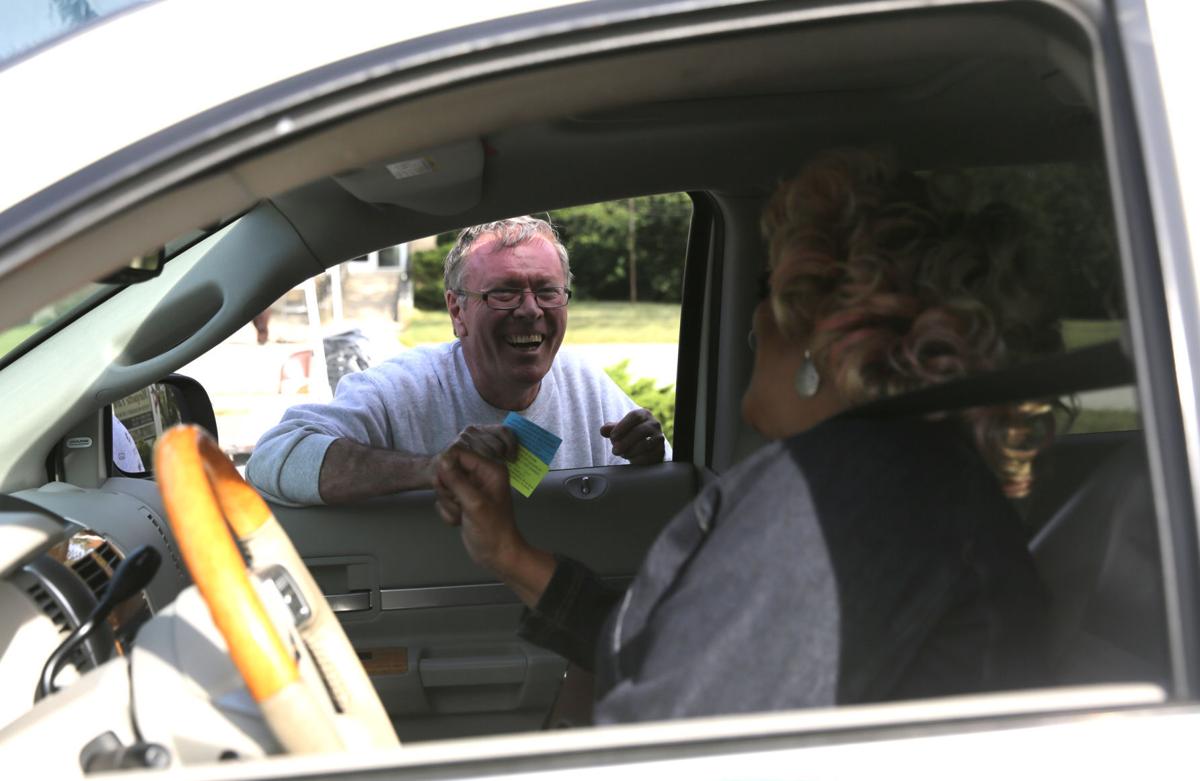 Volunteer Matt Dilts of Gary delivers meals to a customer in her car during a chicken and rib dinner Friday at Marquette Park United Methodist Church in Gary. 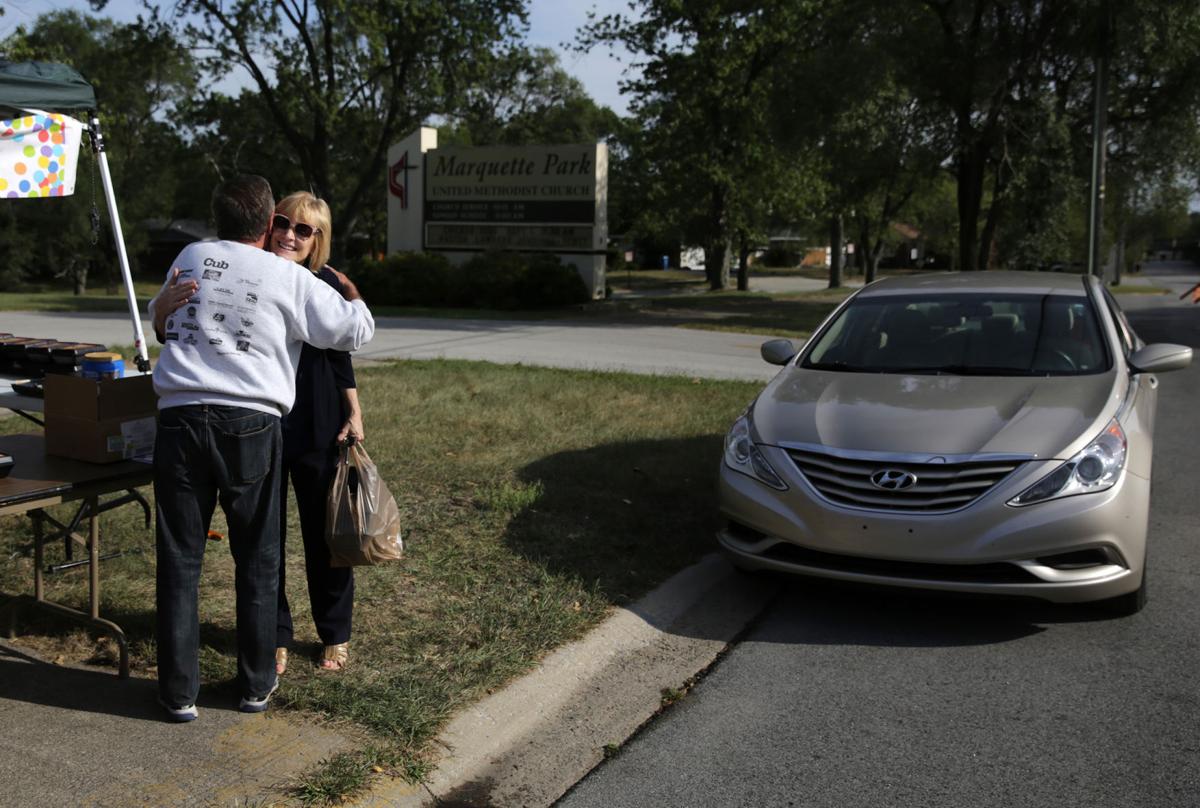 Volunteer Matt Dilts, left, of Gary hugs customer Barbara Wisdom after giving her her food during a chicken and rib dinner Friday at Marquette Park United Methodist Church in Gary.

GARY — Jessie Renslow's community-building efforts have expanded beyond the boundaries of the city's Miller neighborhood as she works to engender pride among residents of her hometown.

Renslow's community-builder position grew out of the Neighborhood Spotlight program in which Legacy Foundation grant money was used to assist people in planning their neighborhood's future.

She stressed the need to move beyond neighborhood boundaries, however, and work together to restore the whole city. The Legacy Foundation is Lake County's community foundation.

The spotlight program generated a series of goals that have been put in place in both the Miller and Downtown/Emerson areas, including the Ken Parr Build-a-Bike program, started in June at an old supermarket in the 6300 block of Miller Avenue, that supplies bicycles for many area residents. It's one of many initiatives residents are embracing to improve the quality of life in their city.

Since it's inception, there have been 52 participants and 13 graduates of the program, with some of the graduates coming back to help others work on their bikes, Renslow said. Graduates have completed their bicycles and four hours of service time.

Participants can donate four hours working for the Miller Garden Club or make a financial contribution to the program, which includes repairing existing bicycles or building bicycles from scratch, Renslow said.

In the city's Downtown/Emerson section, which also was a recipient of a Legacy spotlight grant, community residents have created a garden on land where two abandoned homes once sat. The FAITH Farms project not only provides locally grown herbs and vegetables to neighborhood residents and at least one restaurant, but also is a place where people can acquire agricultural skills.

In the University Park area, the recently completed $45 million Arts and Sciences Building shared by Indiana University Northwest and Ivy Tech Community College is being viewed as a neighborhood anchor.

"Just having the new building sitting in that corner, there is a lot of hope for residents in the area of a renaissance taking place," precinct committeewoman Mary Lee said.

The repaving of Broadway through the area and the resurfacing of some side streets is encouraging as well, she said.

Joe Van Dyk, executive director of the city's Planning and Redevelopment Department, noted paving has been done along 35th Avenue, and Ridge Road is one of the roads to be paved next year.

The efforts seek to capitalize on the new Arts and Sciences building as well as the Blueprint for Change document. The document was put together by the University Park East community as part of an effort funded by a Choice Neighborhood Planning Grant from the U.S. Department of Housing and Urban Development.

The area along 35th Avenue and Broadway is one of three targeted areas for development, along with the former Colonial II public housing property across from Ivy Tech, and land around the vacant Benjamin Franklin School site at 600 E. 35th Ave. The old vacant structures at the Colonial II are expected to be demolished soon.

"We have a lot of momentum in the area, and we want to build on it piece by piece," Van Dyk said.

He noted that Community HealthNet Health Center at 1500-1535 E. 35th Ave. should be opening soon. Lee also pointed to this year's opening of a restaurant along Broadway as another boost for the area.

That restaurant — J's Breakfast Club — relocated to larger new digs at 3669 Broadway in Glen Park, from its former spot in the 1200 block of Grant Street. In addition to showing its support of the city through its investment there, the restaurant is supporting FAITH Farms by utilizing its produce and showcasing other local businesses during its Small Business Saturday events.

Small businesses also are being promoted and supported through the opening of The Stage, a small-business incubator and co-working space at 925 N. Shelby St. in Miller. That initiative, launched in February, already has generated some successful temporary "pop-up" businesses, Renslow said.

In the Downtown/Emerson area, Arthouse: A Social Kitchen has begun hosting culinary business incubator workshops that will extend into late October with participants possibly getting the opportunity to test out their business plan with pop-up cafes and pitches to businesses.

"Some really, really good things are happening," said Esther Lewis, who is the community builder with the Downtown/Emerson Spotlight group.

One of these good things is the group's collaboration with Servants at Work, out of Indianapolis, in helping obtain volunteers to construct wheelchair ramps for residences throughout Lake County.

In the Glen Park area, the Blind Social Center, operated by Connie and Tony Blair, is involved in making sure the Gary Public Transportation Corp. bus route is accessible to the blind through the installation of audio information devices.

Audio devices at large flower/vegetable boxes also have been installed as part of an accessible garden project at the club in the 4900 block of Broadway with the support of Home Depot and Pathways to Health. The garden area north of the club will be opened to the community where locals can come and enjoy nature, according to Connie Blair.

An example of the interconnection of the various programs around the city is how some members of the center travel up to Marquette Park on Thursdays for kayaking at the accessible kayak/canoe launch opened last year.

Various features also were incorporated in the recently reopened James Reed Nature Play Park near 15th Avenue and Connecticut Street to accommodate people with disabilities, including making planters accessible to those in wheelchairs and a swing that complies with the Americans with Disabilities Act.

The Zagster bicycle rental program includes 11 bicycles and four docking stations throughout Miller, including The Stage small-business incubator on Shelby Street and the Miller Beach Farmers Market at 667 Lake St., across from the train station.

"We would love to see Zagsters popping up across Gary and the Region as a whole," Renslow said. "We're seeking sponsors for our fleet for 2018. (The bicycles) are a great way to contribute to holistic community health."

Another project, this one being done in the city's Miller, Aetna and Emerson neighborhoods, is decorative board-ups. Renslow said eight full buildings have been done. There also have been 12 poetry doors done using stencils of poems by known Gary poets.

"Sometimes we paint, sometimes we do the board-ups," she said. Renslow said volunteers usually work with a board-up specialist or employees with the city's Redevelopment Department.

GARY — The Blind Social Center will unveil its newest addition Saturday — a community garden designed with the blind and visually impaired in mind.

Legacy Foundation has awarded $10,000 in community grants this week to 10 recipients — aimed at empowering organizations and individuals with …

GARY — The city is moving forward seeking a developer for the University Park East neighborhood, while hoping it can obtain a large grant to a…

GARY — City officials would like to see some student housing around its colleges like those planned in Hammond.

Volunteers sell meals to customers during a chicken and rib dinner on a recent Friday at Marquette Park United Methodist Church in Gary.

Volunteer Matt Dilts of Gary delivers meals to a customer in her car during a chicken and rib dinner Friday at Marquette Park United Methodist Church in Gary.

Volunteer Matt Dilts, left, of Gary hugs customer Barbara Wisdom after giving her her food during a chicken and rib dinner Friday at Marquette Park United Methodist Church in Gary.