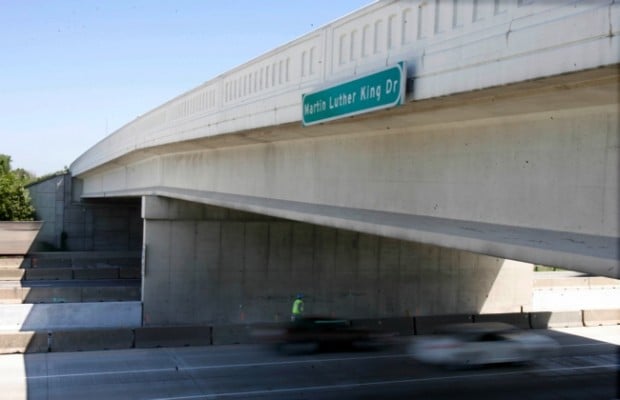 JOHN LUKE | THE TIMES Traffic moves along Interstate 80/94 in Gary on Wednesday while the overpass spanning the expressway on Martin Luther King Drive is closed to traffic because of structural issues. 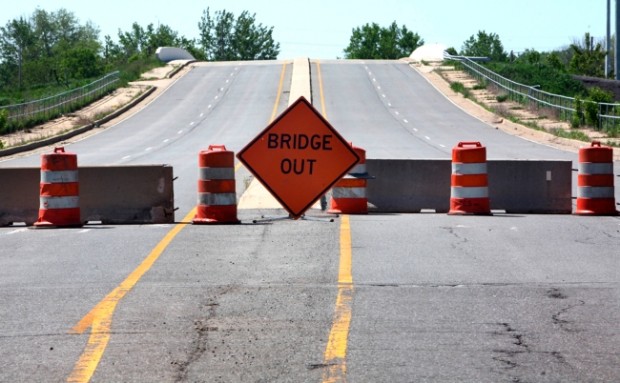 JOHN LUKE | THE TIMES The overpass spanning I-80/94 on Martin Luther King Drive is closed to traffic because of structural issues.
By Bowdeya Tweh and Lauri Keagle - Times Staff Writers

GARY | The Indiana Department of Transportation on Wednesday morning announced the indefinite closure of the Martin Luther King Drive bridge over the Borman Expressway in Gary, citing safety concerns.

INDOT officials said they believe cracks found on the concrete beams have compromised the load-bearing capacity of the bridge, a statement issued Wednesday said. The agency said it plans to replace the bridge beams and concrete "as soon as possible."

Traffic is being rerouted to Broadway via 21st and 35th avenues.

INDOT reports the bridge carried 4,100 vehicles daily. The bridge is located between Broadway and Interstate 65.

The state hopes to select an engineering firm to begin construction this fall and reopen the bridge to traffic by June 2011. The project is expected to cost about $2.5 million.

The bridge was built in 2004 to span the widened Borman Expressway. INDOT spokeswoman Angela Fegaras said the bridge's expected life was 20 years and its load capacity is 80,000 pounds.

"This is not standard that a bridge should have this short of a lifespan," Fegaras said.

The action comes after a Friday afternoon report from staff bridge engineers regarding the severity of the cracks on the concrete support beams and bridge deck. A day later, only passenger vehicles were allowed to travel the short span and Indiana State Police provided special enforcement to keep trucks and buses off the bridge. Two outside lanes in both directions were restricted a week earlier.

LaLosa Burns, spokeswoman for the city of Gary, said the city has been in discussions with INDOT about the bridge and that the priority is the safety of Gary residents and motorists.

Burns said she would refrain from further comment until she talked to the city's traffic engineer about the bridge.

Fegaras said three other bridges near the Borman Expressway soon to get precautionary inspections are at Georgia Street, Broadway and Grant Street. These bridges are being subjected to tests because they were constructed about the same 2003-04 time frame as the Martin Luther King bridge, she said.

The MLK bridge closure comes on the heels of December's permanent closure of the Cline Avenue bridge due to structural safety concerns. INDOT plans to demolish the bridge by 2013 and this year will begin building a permanent detour along Dickey and Riley roads for the 35,000 vehicles that previously used the bridge daily.

DOUG ROSS: INDOT must rebuild its reputation, too

Wednesday's closure of the Martin Luther King Drive bridge over the Borman Expressway, just six years after the bridge was built, should be ri…

JOHN LUKE | THE TIMES Traffic moves along Interstate 80/94 in Gary on Wednesday while the overpass spanning the expressway on Martin Luther King Drive is closed to traffic because of structural issues.

JOHN LUKE | THE TIMES The overpass spanning I-80/94 on Martin Luther King Drive is closed to traffic because of structural issues.
© Copyright 2021 NWI Times, 601 W. 45th Ave. Munster, IN | Terms of Use | Privacy Policy
Powered by BLOX Content Management System from TownNews.com.
You don't have any notifications.