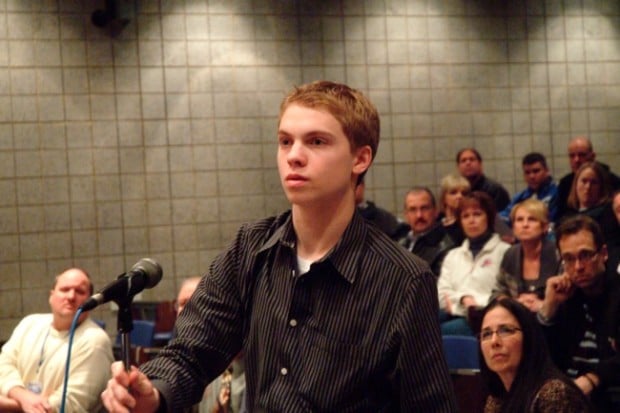 TONY V. MARTIN | THE TIMES Michael Macjrowicz, editor of the Lake Central High School newspaper, addresses the School Board on Monday evening about the issue of the paper that was pulled from circulation despite being approved prior to publication. 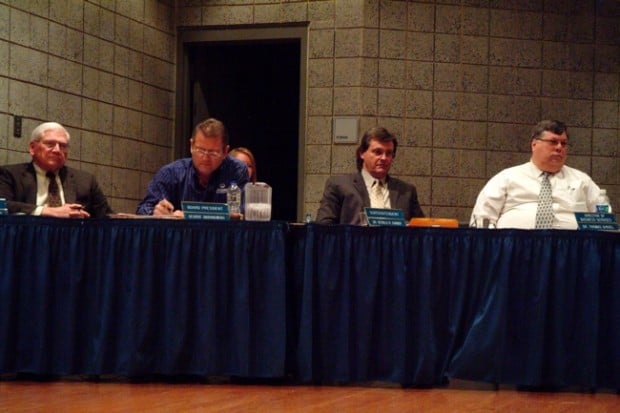 TONY V. MARTIN | THE TIMES Members of the Lake Central School Corp. board listen to Michael Macjrowicz, editor of The Scout, discuss the newspaper staff's feelings about seeing the paper pulled because of a controversial editorial.
By Louisa Murzyn - Times Correspondent

ST. JOHN | The Lake Central School Corp. board heard impassioned arguments Monday night from a dozen students and parents who felt the removal last week of the student newspaper by administrators was an act of illegal censorship.

A newspaper editorial criticized the job performance of Lake Central High School's former football coach, Bill Melby, who resigned in early December but is still a teacher at the school. School officials said the paper was pulled because it was a disruption to the learning environment.

"The fact that the article and the newspaper was approved and then removed is absolutely against the law," said Michael Majchrowicz, editor-in-chief of The Scout.

"We respectfully request that our newspaper be put back on the newsstands no later than Tuesday, Feb. 16. We have done nothing but follow the rules and protocol. For the sake of our student rights we are asking the same in return."

Assistant Principal Sean Begley agreed the prepublication approval process needs review and that freedoms are paramount. However, the newspaper is not a place to air personnel issues, he added.

"I really respect your opinion," he said. "I take the rights of our country very seriously. But it's important for students and staff to show respect for each other, and that we maintain a safe and balanced learning environment.

"Our journalism students shouldn't be painting only a bright picture. There are things that can be appropriately debated that will develop our students into great journalists."

Bill Keith, a St. John native and 1982 Lake Central graduate, praised the students and supported their request to have the paper put back on newsstands.

"I'm proud to be part of a school system that raises kids like this," he said. "Truth conquers -- don't we all want the truth? I don't know the student, but I think he did a nice job. Thank God we live in a country where we can speak our mind and we have differing opinions. That's what checks and balances are all about."

Student Hanna Nava said the editorial was crafted by an intelligent editor-in-chief. "This was a breach of our First Amendment rights," she said. "We know what we want -- to express our opinions and stand up for what we believe. The Scout staff did nothing wrong. Removing the paper from the stands says that our opinions are unwanted."

Parent Janet Wartman said the controversial editorial was not the opinion of the entire newspaper staff. School Board President George Baranowski agreed the process broke down and they would review it.

The project, scheduled for completion in six months, will cost roughly $1.2 million. All of that, White stressed, is coming from church households without any fundraisers.

The boater and three other people were aboard when their vessel capsized just before 2:15 p.m. Saturday offshore from the East Chicago Marina, authorities said.

"He was very loved," Benjamin Soto said. "He liked to talk to people and he was a hard worker. He was my baby, the youngest."

UPDATE: Lake Station man killed in crash on I-94

James Baker, 54, died from blunt force trauma at the scene of the crash, according to the Lake County coroner's office.

Some 38 members of the East Chicago Professional Firefighters Local 365 are suing Mayor Anthony Copeland this week in U.S. District Court in Hammond.

The fire started accidentally as the driver was filling his car with gas and appeared to have originated in the car's engine compartment, said Merrillville Deputy Fire Chief Jim Lilley.

The school board voted Tuesday against a proposed balanced 2021-22 school calendar that would have started earlier and created remediation time during fall and spring breaks.

"We have a narrow window of time today where the weather will allow for the search to continue," said Indiana Department of Natural Resources Conservation Officer Tyler Brock.

The Munster Police Department said the event is tentatively scheduled to be held in August.

TONY V. MARTIN | THE TIMES Michael Macjrowicz, editor of the Lake Central High School newspaper, addresses the School Board on Monday evening about the issue of the paper that was pulled from circulation despite being approved prior to publication.

TONY V. MARTIN | THE TIMES Members of the Lake Central School Corp. board listen to Michael Macjrowicz, editor of The Scout, discuss the newspaper staff's feelings about seeing the paper pulled because of a controversial editorial.
© Copyright 2021 NWI Times, 601 W. 45th Ave. Munster, IN | Terms of Use | Privacy Policy
Powered by BLOX Content Management System from TownNews.com.
You don't have any notifications.