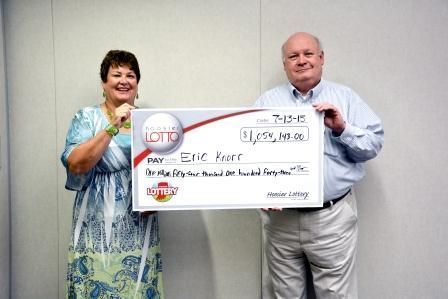 CROWN POINT | A trip to the grocery store can deflate a wallet fast, but Crown Point resident Eric Knorr managed to more than refill his wallet by buying a winning $2.5 million Hoosier Lotto jackpot ticket at the Strack & Van Til store at 10851 Broadway.

Knorr came forward Monday to claim his prize, opting to take the $1,054,143 lump sum check, after taxes, rather than receive the $2.5 million as a 30-year annuity. He received the prize Monday at lottery headquarters in Indianapolis.

Knorr was at work at an area steel company Tuesday and not available for comment. According to the Hoosier Lottery, he initially went to the store to buy a Mega Millions ticket but changed his mind and bought the Hoosier Lotto ticket for last Saturday's drawing instead. He said he usually buys the Mega Millions because the jackpots are bigger.

He told the lottery officials he plans to use part of the money to buy new cars for his two children. Knorr is the second person from the area to win a Hoosier Lotto prize recently following the $18.7 million won by Dena Wright and Daniel Gresham, of Chesterton.

Strack & Van Til receives a $25,000 bonus for selling the winning ticket.