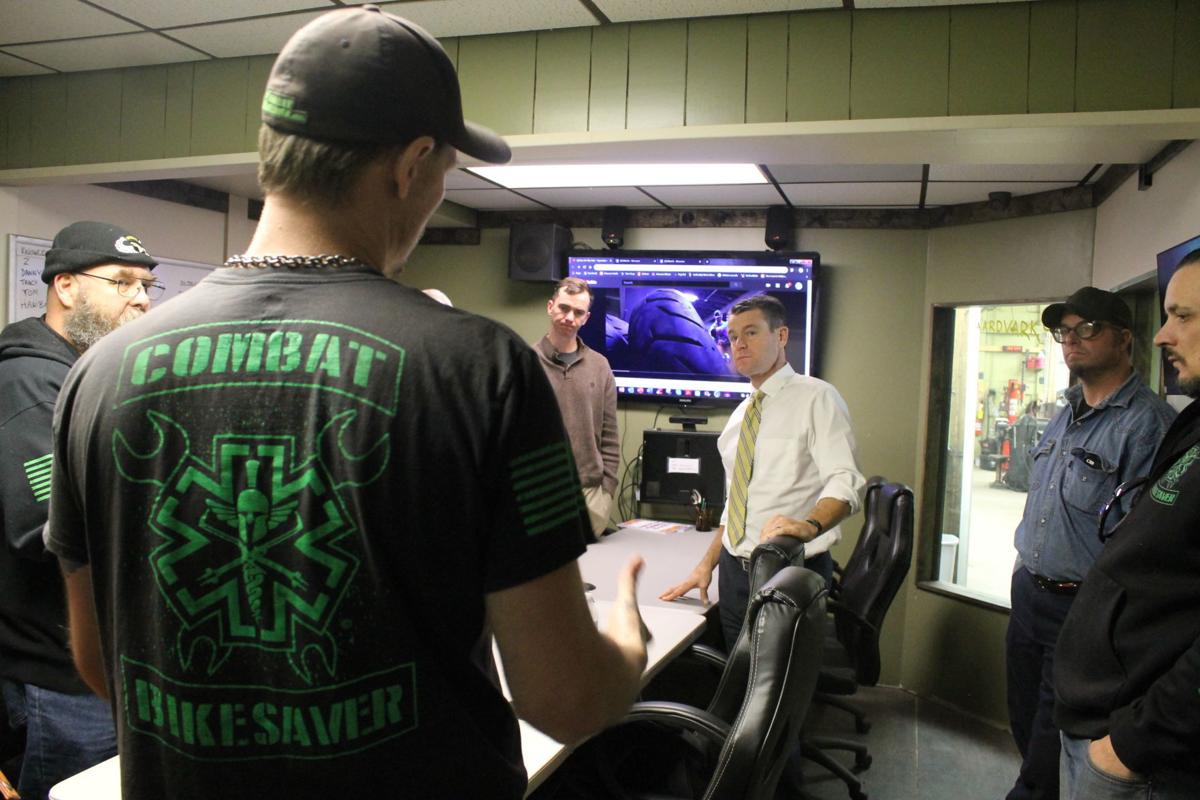 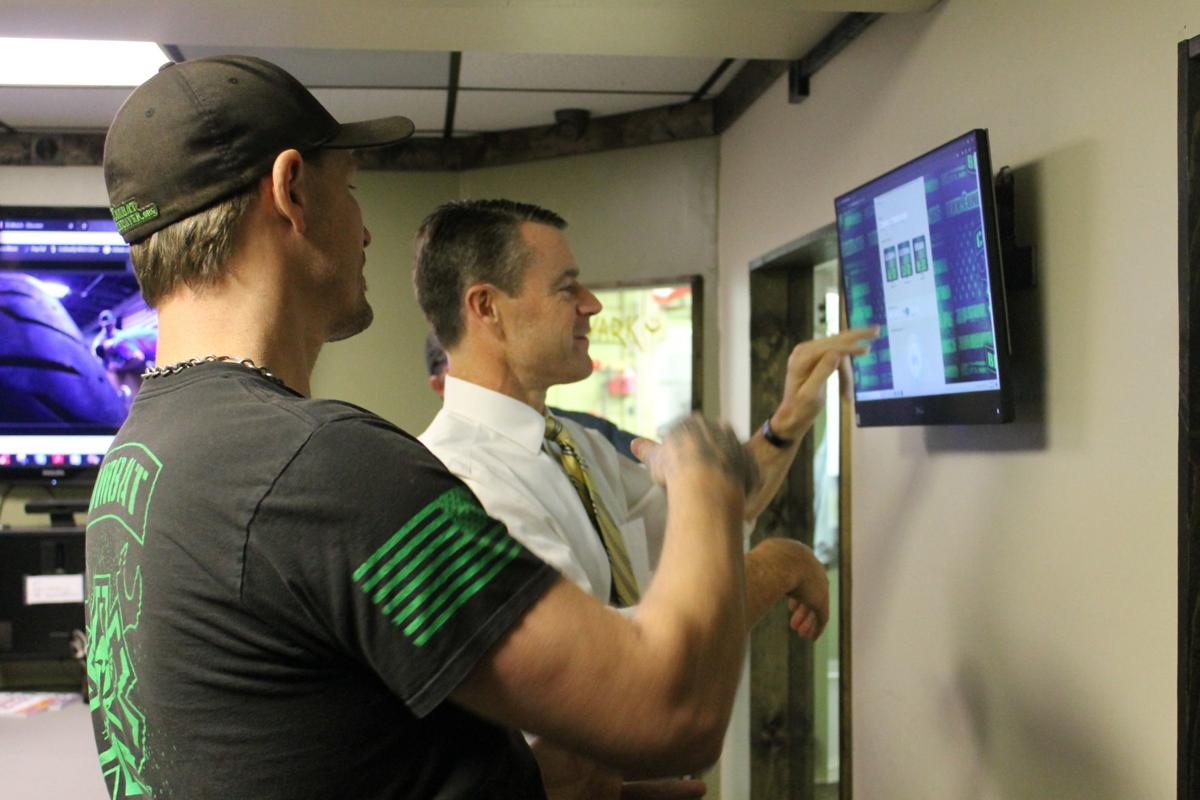 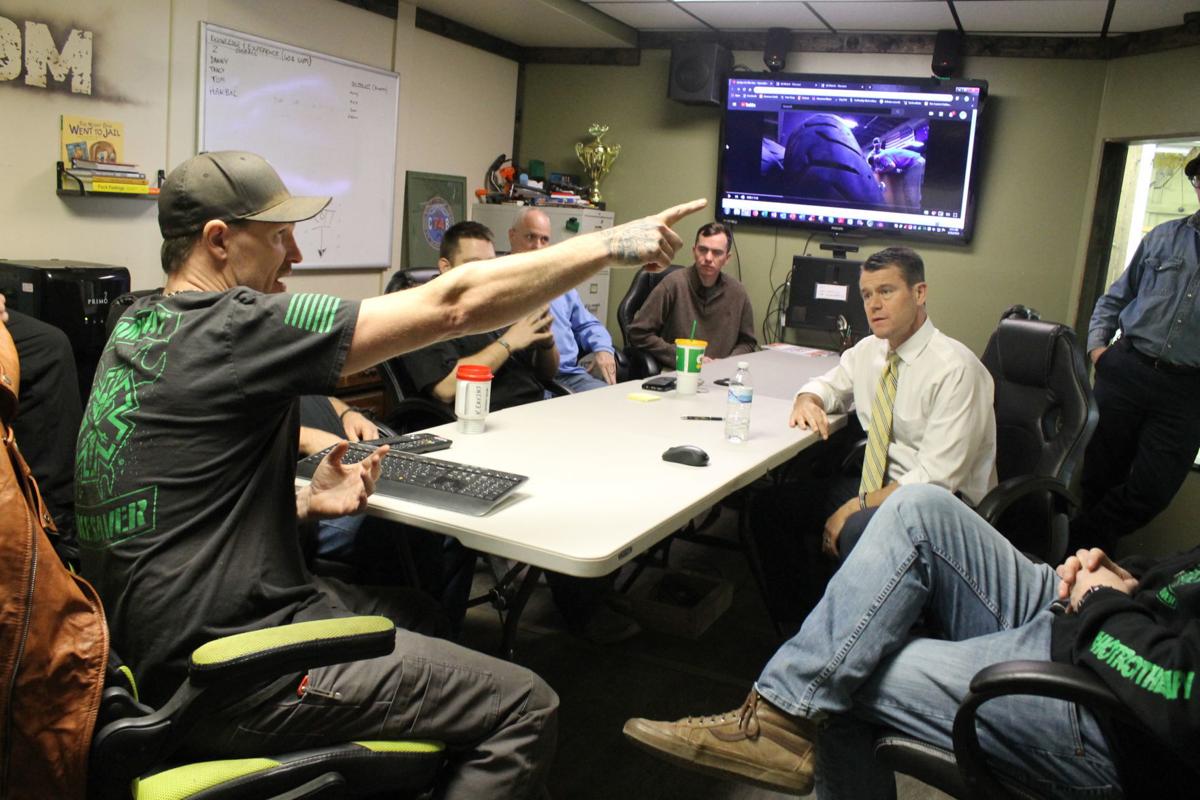 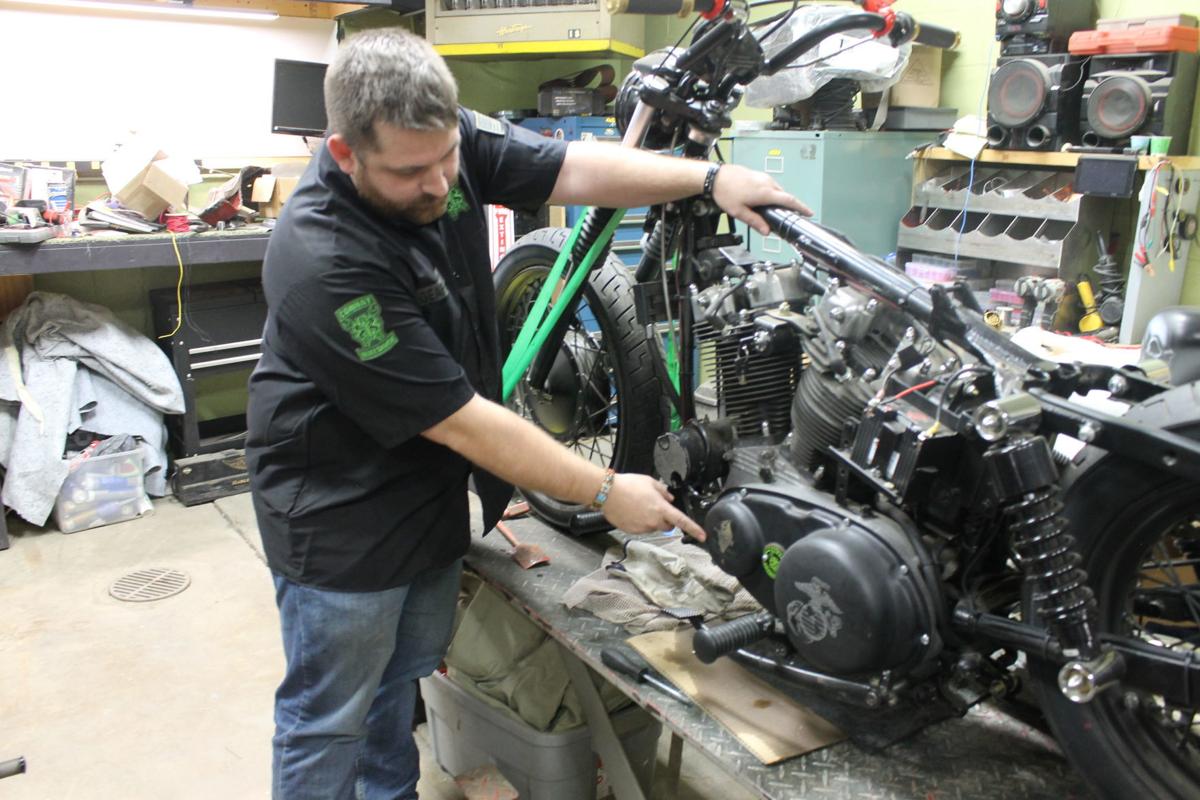 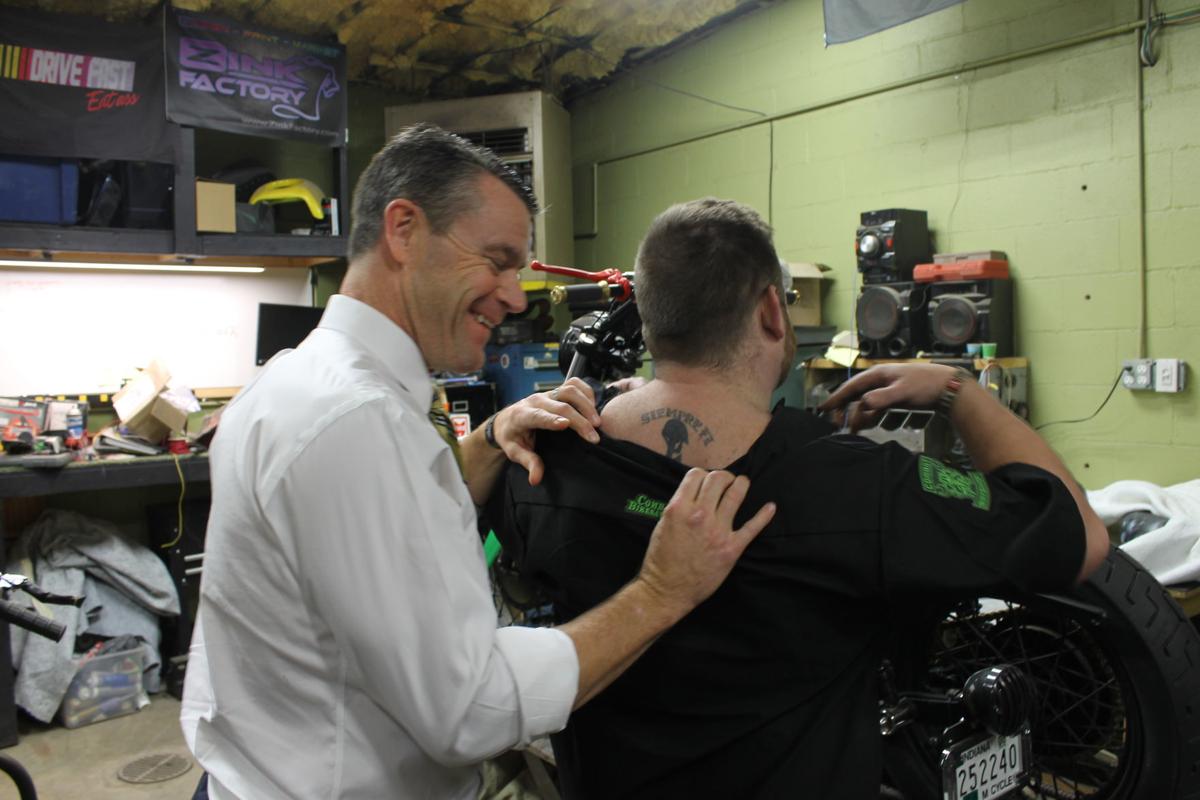 U.S. Marine Corps veteran Dan Riordan laughingly shows off his "Siempre Fi" tattoo — a misspelling of USMC motto "Semper Fi" — to U.S. Sen. Todd Young, who served as an intelligence officer in the U.S. Marine Corps prior to entering politics.

CROWN POINT — When it's finished, Dan Riordan’s 1969 Harley XLCH will show all the signs of his service — a gold star for his former commander, a listing of names of all those in his battalion killed in action, and a dress blue fender with the Marines’ signature “blood stripe” running down the middle.

Riordan, a veteran of the U.S. Marine Corps, began building the bike almost a year ago in the garage of Crown Point-based Operation Combat Bikesaver.

The group gave him a chance to rediscover himself after serving for seven months in Iraq.

“It was nerve wracking at first walking in,” Riordan said. “I knew I was going to have to open up a portion of myself.”

Riordan, along with other members of the Operation Combat Bikesaver team, shared their stories with U.S. Sen. Todd Young, R-Ind., on Friday.

“This reawakens people’s emotional energy, their drive, their spirit,” said Young, who served as an intelligence officer in the Marine Corps.

The visit, a year in the making, was arranged to share the message of the 4-year-old nonprofit, which strives to help veterans manage the effects of PTSD and depression through a motorcycle restoration program.

The group offers free Sunday workshops to veterans, allowing them to take ownership of their individual creative projects and develop lasting relationships with those who share an understanding of what it’s like to return from the scene of combat.

What the veterans make in the Operation Combat Bikesaver garage, they get to keep.

The group calls it “Hot Rod Therapy,” which serves a goal to lower suicide rates, encourage community support and provide an escape for those struggling with a return to civilian life.

“A lot of what happens here is a reminder of service,” Operation Combat Bikesaver founder Jason Zaideman said. “It’s a reminder of the chances to adapt and overcome.”

For veterans like Riordan, the group can channel productive memories of their service into opportunities for community building and outreach.

After he returned from Iraq in March 2005, Riordan said he struggled with finding a purpose after service, bouncing from job to job.

Although hesitant at first to approach the Crown Point nonprofit he learned about through a web show presented by "Dirty Jobs" host Mike Rowe, the Marine veteran now spends nearly every Sunday in the Operation Combat Bikesaver garage.

He’s also studying business at Indiana University Northwest, where he’s been elected to student government and founded the campus’ own veterans support group.

Riordan showed off his bike Friday with a proud grin.

Though headquartered in Crown Point, Operation Combat Bikesaver is introducing new chapters in a model Vice President of Nation Operations Jason Gootee hopes can be replicated across the country.

The organization of a couple dozen Indiana members expanded this year into Alabama and California, and is looking next to Montana.

The team is also partnering with IUN second-year medical student Cody Stewart for a one-year prospective study through the IU School of Medicine’s Scholarly Concentrations program to collect data showing the positive influence of the program on veterans’ mental health.

“There’s not another veteran center — therapy based — like ours in the United States,” Gootee said. “We think we’re doing something the VA’s now doing right now.”

It’s not always easy work. Veterans come in and have bad days, but that’s a part of what the Operation Combat Bikesaver family is there for, Zaideman said.

“There are frustrations and hurdles when I build a motorcycle — it’s not easy,” Zaideman said. “But, I don’t want it to be easy. Life’s not easy.”

The group, working out of several garage bays in at a small site off of West 133rd Avenue, is continuously looking for community support in the form of donations and volunteers.

“We really want to let people know that we’re trying to do something,” Gootee said. “The suicide rate is unacceptable and we’re someone in your backyard working to solve the problem.”

For more information about Operation Combat Bikesaver, see the nonprofit’s website at combatbikesaver.org.

CROWN POINT — On a recent warm, sunny Sunday, while people relaxed on the water at nearby Lemon Lake and enjoyed the fun at Cedar Lake Summerf…

As a Marine, I swore always to remain faithful to those serving by my side. That includes ensuring our veterans receive the care and respect t…

U.S. Marine Corps veteran Dan Riordan laughingly shows off his "Siempre Fi" tattoo — a misspelling of USMC motto "Semper Fi" — to U.S. Sen. Todd Young, who served as an intelligence officer in the U.S. Marine Corps prior to entering politics.