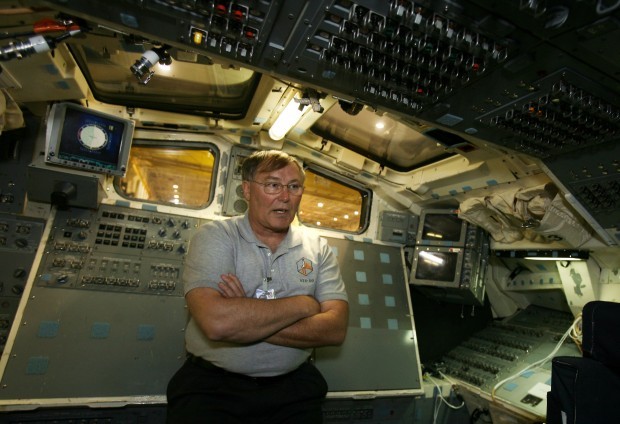 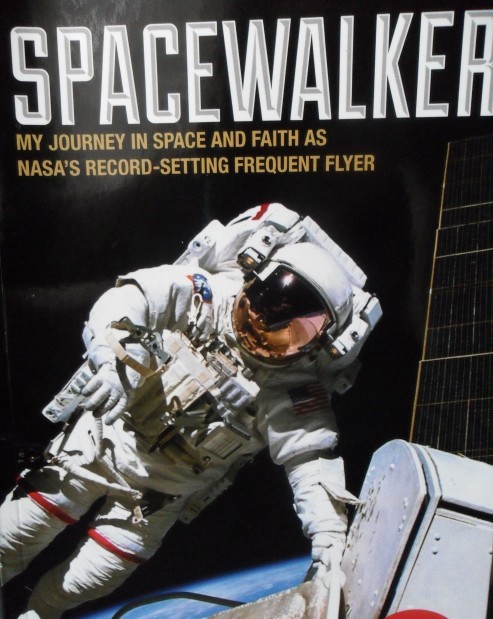 Cover of book on astronaut Jerry Ross, which is scheduled to be released in late January.

For Jerry Ross, the sky wasn't the limit.

The Crown Point native and Purdue University graduate who has launched into space seven times -- a feat only one other person on the planet can claim — has written a book about his life.

From intimate childhood memories to behind-the-scenes moments in NASA and the blackness of space, Ross' book unfolds like a pieced-together collection of sci-fi journal pages.

"I wrote it for people to enjoy learning more about the space business and hearing what I saw and did and sensed," he said.

He writes about his first launch into space and seeing the constellation Orion, which he gazed at as a boy in Crown Point and later with his family on blankets in California.

“When I gazed at Orion before, I was just dreaming of going into space,” he writes. “Now, I was most definitely on my way, heading from sitting on the launch pad to a speed of 17,500 mph in eight and a half minutes – that is all the time it took to get into space in the shuttle.”

Ross, 64, retired in January and lives in Friendswood, Texas. His book, "Spacewalker," will come out at the end of January. He will visit Northwest Indiana in February for book signings.

"People would say, 'That's a great story. You should write a book,'" Ross said. "I want people to enjoy what they're reading and see it's a person that did this, that experienced these things."

He said his example of growing up in Northwest Indiana shows children can dream big, study hard and achieve their goals.

Ross has given speeches in every state and 17 foreign countries. He's met celebrities and world leaders. Through telling those stories, he carries the recurring theme about dreaming big, working hard and having faith.

Faith in God and a hereafter loosens the grip of fear.

“If you accept you've been saved and ... you're doing your best to keep sins to a minimum, it allows you a lot of freedom,” he said.

Returning to space isn't out of the question, if it meant giving Ross a chance to set foot on Mars. But, he said, he would have to be in his late 70s or into his 80s for it to be worthwhile.

"I'm basically done, unless they would give some one-way tickets (to Mars) to some geezer," he said. "Why not? What an incredible experience that would be."

Ross' smarts and sense of humor come through on the pages, as he shifts from stories about scientific equipment to days goofing off at Purdue.

His daughter, Amy, also graduated from Purdue and works as an engineer at NASA.

Ross told The Times that Amy is one of about 6,400 people who applied for NASA's astronaut program. That pool was whittled down, and she will be among the 100 or so invited for the first round of interviews in January.

The future of space exploration worries Ross. He blames politicians for putting it in peril.

"If I was king for a day ... I'd put NASA's goals and budget and everything under some other group of people that aren't directly linked to the political process," he said.

He wants to see a program that puts people on the moon permanently and sends people to Mars to establish a base there or on one of its moons. Long-term plans and sufficient funding is crucial, he said.

On the decline of math and science scores in students: "I'm very concerned about that," he said. "We're trending downward within the industrialized countries of the world." The U.S. is falling behind on graduates in engineering, math and science. "If you don't have that talent pool, then our economy is going to flounder," he said. "Technologies will be developed elsewhere." He is working with the Purdue University School of Education to bring science, math and technology education into the classrooms.

On the possibility of alien life: There is no proof aliens exist, but looking at the vastness of the universe and the number of stars and planets, there is the the possibility that some life form exists somewhere, he said. "Whether it's a two-legged human being like a person or a worm under a rock somewhere ... I leave that open for future generations to figure out. The Bible doesn't say, one way or the other."

On farm boys making good astronauts: Although some of the best astronauts are from New York City, the Midwestern work ethic comes in handy when dealing with the rigors of being an astronaut. "We had to learn how to think for ourselves, had to develop a keen sense of common sense," he said. When people ask who he would hire to be an astronaut, "I told them a 6-feet-tall, lanky farm kid who had done gymnastics," Ross said. Common sense, ability to use tools, long arms and good upper body strength make for a good astronaut, he said.

On items he's brought to space: When you're an astronaut, people are always handing you trinkets to fly on trips to space. Ross has carried the key to the '57 Chevrolet he and his son rebuilt; a "P" for Purdue that links on the Old Oaken Bucket, a traveling trophy between Purdue and Indiana University; Purdue banners; sycamore tree seeds; a checkered flag for the Indy 500; Red Skelton's son's rosary; a Garfield medallion for cartoonist Jim Davis; a Chicago Cubs banner and much more.

On wealthy people buying trips to space: "I think some of those people have more money than sense," he said. "They aren't going into orbit. It's like a ballistic shot." If people want to experience zero gravity, they can ride in a KC-135 "vomit comet" which does parabolic flights. If and when we can get people safely into orbit, then he would encourage them to do it, he said.

Cover of book on astronaut Jerry Ross, which is scheduled to be released in late January.