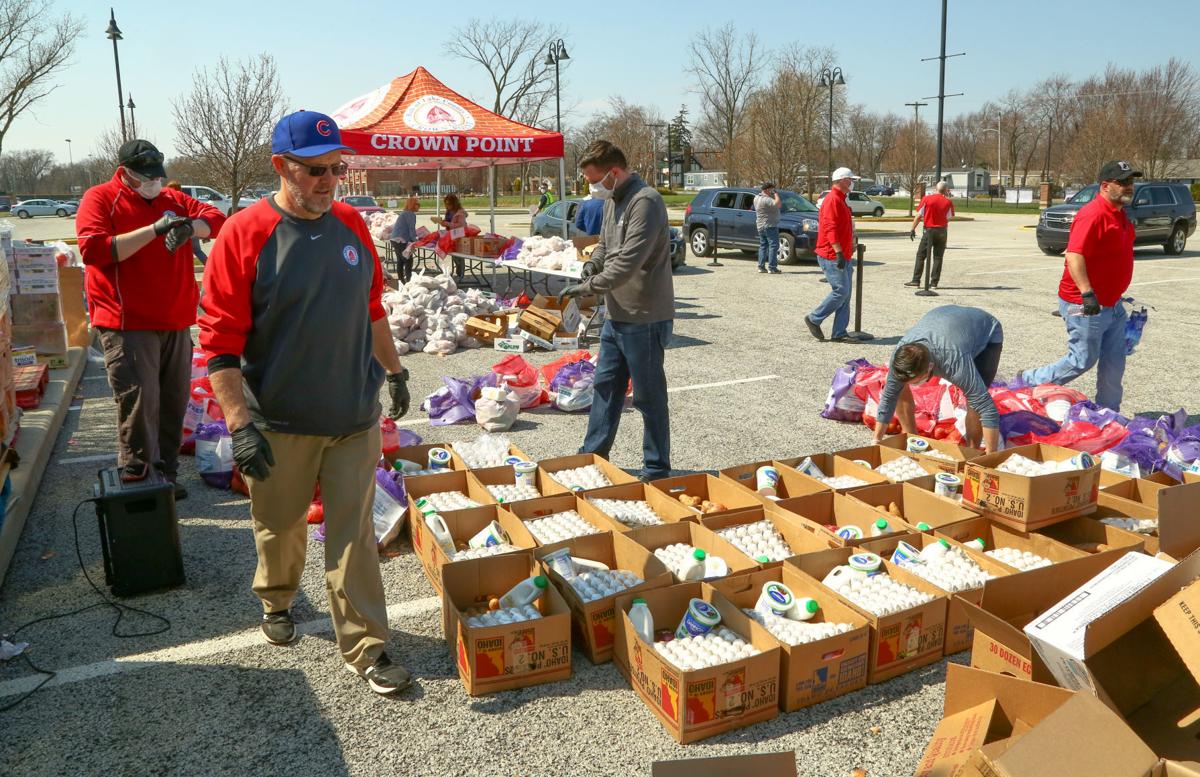 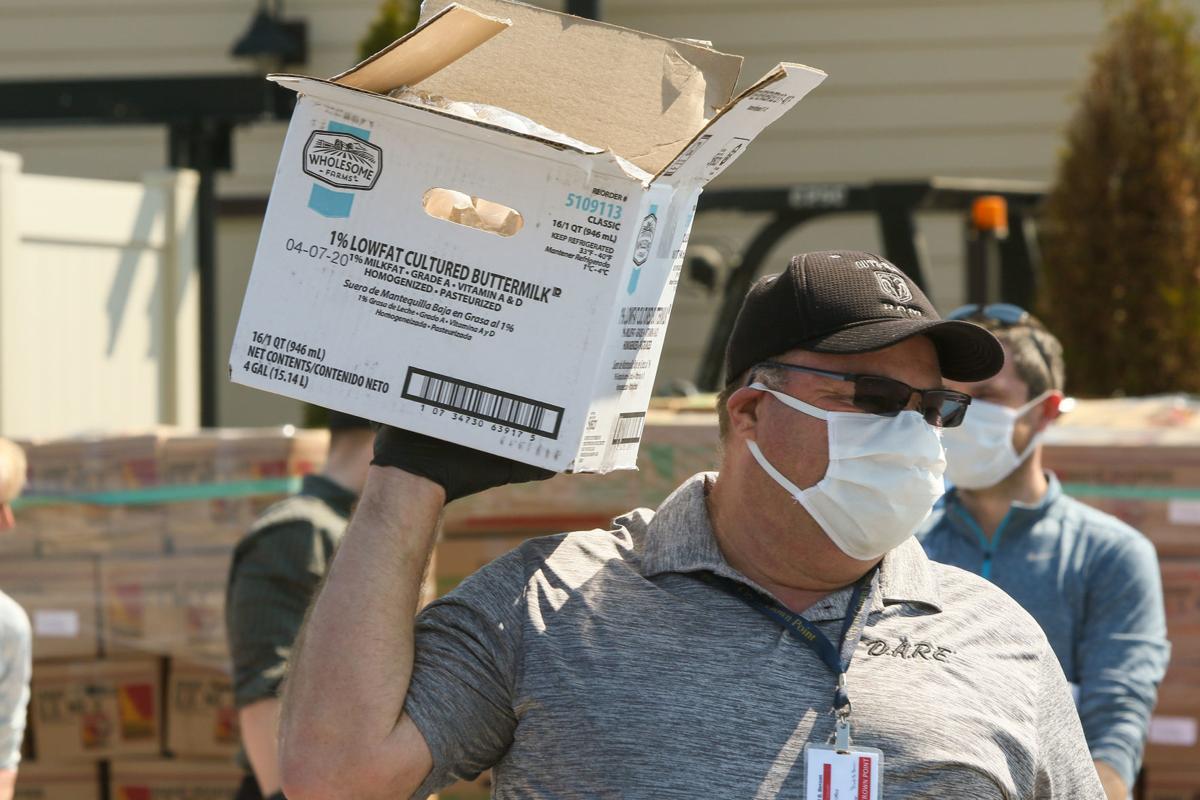 Crown Point Clerk-Treasurer Dave Benson prepares to load food into a car Friday at the drive-thru pantry at Bulldog Park. 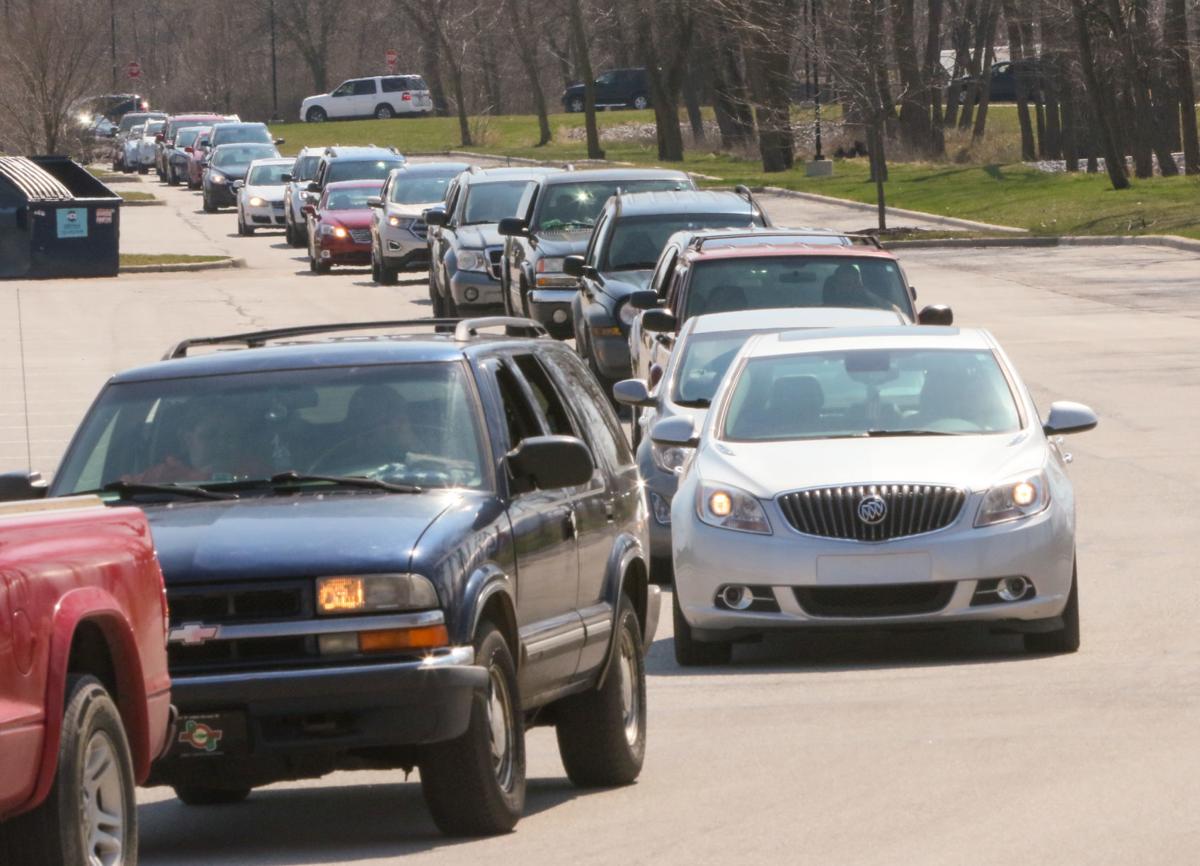 Vehicles are lined up as local residents get food items Friday at Crown Point's drive-thru pantry at Bulldog Park.

The boxes would be loaded into car trunks until all the groceries were gone, Burgess said.

Marben said she was surprised to see the long line of vehicles that snaked their way off East North Street, circled around the Sportsplex area and ended at a red-tented area.

"Look at the lines. It shows the need," Marben said.

Radeana Martin, of Crown Point, came with one of her two sons, Daniel Ziller, who lives with her, along with her grandchildren.

Martin said the food items would greatly help her feed her family of five.

Roland and Margaret Davis of Crown Point pulled up, popped open the trunk so city officials, wearing protective gear,  quickly placed a box of food items for them to take home.

The opportunity for the food giveaway was presented to the city Thursday after Redevelopment Commissioner Aaron McDermott of Latitude Commercial heard Sysco Chicago, a company that sells food products, was looking for a community partner, Crown Point Mayor David Uran said.

"They were looking to partner with somebody with some food items that needed to be passed out," Uran said. "There's some expiration dates coming up on it late next week and the week after."

Uran said Sysco was looking for a way to give back to the Northwest Indiana community, as it normally serves various restaurants in the Region.

However, because there are perishable items like eggs and buttermilk, the city would need access to a large refrigeration area.

Because vents in the city are nonexistent and the city has a partnership with Indiana Beverage, officials were able to secure refrigeration units that are typically used to keep beer cold, Uran said.

After a few hours of working out logistics, the parties came together to host a drive-thru food pantry — where residents could "roll in and roll right out" with various food items without getting out of the car.

Uran said he had no idea going in how many people would be coming in to get the free food.

"It was unprecedented until now. We have no playbook in this society at this time," Uran said.

Uran said there was no screening of those who could partake in the free food and no residential requirements that they be from Crown Point.

"This virus has no boundaries and the city isn't looking at boundaries," Uran said.

The Crown Point 4th of July Celebration Committee, Inc. that its priority is keeping everyone safe during the COVID-19 pandemic.

Here's what Northwest Indiana towns and cities have announced thus far when it comes to the coronavirus outbreak.

Longtime Dyer clerk-treasurer remembered for decades of service to community

Two more people are dead from coronavirus in Northwest Indiana, according to updated numbers provided by the Indiana State Department of Health.

Authorities say a murder-suicide was apparently prompted by the man's concern that the two of them had the coronavirus, authorities said.

Starting this week, city officials are inviting residents to deck their front lawns with spring and Easter cheer — similar to the Christmastime Tour of Lights.

Crown Point officer sworn in virtually due to COVID-19 restrictions

For the first time in city history, a Crown Point police officer took the oath of office virtually.

The coronavirus pandemic has changed the way many people are working, but it hasn't slowed government business in Crown Point.

The city would use the second floor of the building as a locker room facility for athletic games hosted at Bulldog Park and would be connected to the Franciscan Health Pavilion via a catwalk.

Crown Point Clerk-Treasurer Dave Benson prepares to load food into a car Friday at the drive-thru pantry at Bulldog Park.

Vehicles are lined up as local residents get food items Friday at Crown Point's drive-thru pantry at Bulldog Park.